Second of the post today - and there is a particular part in that short that really bothers me as I will go on in the review - here is Ups 'n Downs.

This short is sort of a story-type short, and there is a bit of a climax there towards the end. Although, there is certainly some bizarre stuff in there, one very bizarre one in particular. Read on... 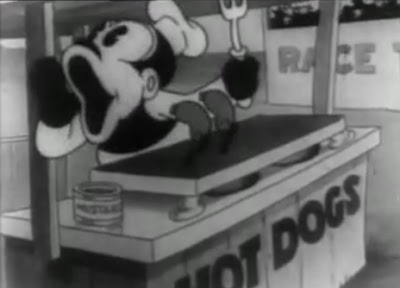 The short starts off with Bosko who appears to be at a carnival and he's one of those carnival barkers who shouts out "Hot dogs!" to get people's attention for their appetites. The shot where he shouts "hot dogs" is very much similar to a Mickey Mouse cartoon The Karnival Kid (1929) where Mickey Mouse shouts "hot dogs" in a carnival - and it was actually the first lines ever said in a Mickey cartoon. There are also hot dogs from the grill that appear to be dancing to life. 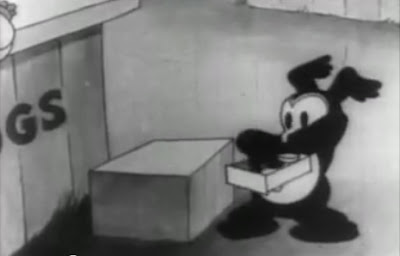 As there is a customer who arrives, to order a hot dog. Somehow, the hot dog comes to life and does the job to spread himself in mustard, and Bosko doesn't need to do anything. Huh, I find that quite confusing, the hot dog wants to get eaten as it comes to life - what, is it suicidal or something. Also, notice a gag where the customer pushes his belly and a til comes out with some money in there. Wow, looks like you can get some money out of that fellow. 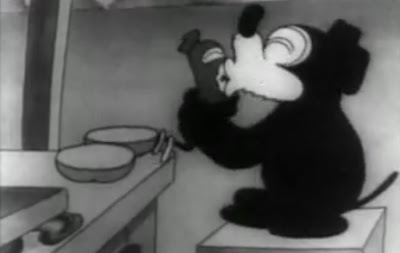 Alas, this comes to the most bizarre moment I've seen so far in any Bosko cartoon so far. The hot dog comes to life as the customer dog is about to eat it, and begs for the customer not to eat "her" and then, a dog and a hot dog FALL IN LOVE?? Wow, I knew that gags were bizarre in the 1930's - but I never expected one that is SO crazy, and that it doesn't even make sense. The dog and the hot-dog just skip along happily after wards. It kills me when I see it due to the fact that it makes no sense at all. I hope not to come across another gag that's as crazy and as ridiculous as that again - chances are that I might come across another mad one.

There are also other animals that notice the carnival, and even an ostrich who is standing behind a fence with a "Race" advertisement poster hanging on. The ostrich is very Donald Duck sound-like and also a group of mice use their slingshots to tease the ostrich. 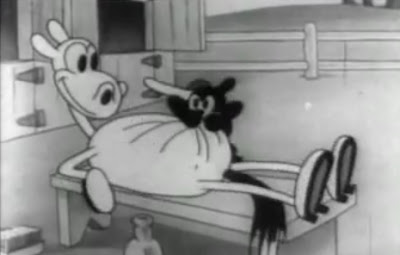 Bosko enters a farm where he enters through a shack, and there is a group of cows and other farm animals doing dances, a horse playing skip-rope and also a type of cat massaging a goat. Of course, they are preparing for a race and the farm animals are exercising. Bosko is also getting ready for the race, too. Instead, he's using a machine - while the other racers are using horses or goats. 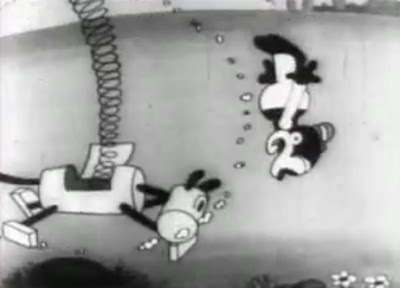 So, Bosko tries to get the machine of the horse started by twisting it's tail over and over (another repeated Harman-Ising gag) and then the machine turns all wonky, and Bosko falls off, as he is getting late for the race, while everyone else is ready. 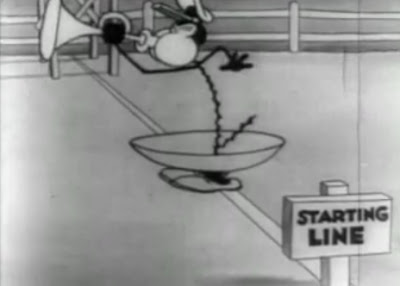 So, a bird who blows the trumpet as the race is about to begin, plays the horn with so much energy that it gets much thinner and thinner, the whole body itself. This is another popular gag by Harman-Ising that was later used in many cartoons like Lady, Play Your Mandolin!

So, Bosko realizes that he's late for the race, and he fixes the horse machine, adjusting the seat so he can sit properly and then it gallops onto the racetrack. In the meantime, Bosko has a rival who appears to be a Mafia type looking jockey on his horse - laughs at Bosko's machinery horse that is shaking, and Bosko blows raspberries back at him in vengeance. 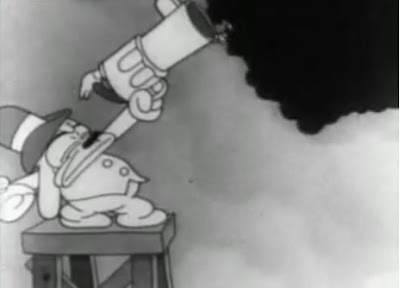 So, the umpire who is standing on a long ladder fires while the race, is ready and as the race gets started. Bosko's machine gets even more wonky and he tries to get the machinery horse moving, and instead it goes backwards until it hits a hut and poor Bosko, his machine's smashed into pieces. 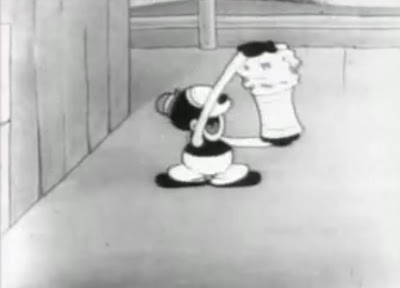 Bosko picks up the pieces and he grabs them into a piece into a type of jar and shakes them like as if he's making a smoothie, and gets the pieces back together and continues to ride along. That gag sort of works, as it shows that Bosko is involved in a climax where he's in a race, and he has little chance of winning and he has to quickly fix them and continue the race.

While he is still racing, he encounters his enemy, who is on the horse and even his rival throws a hand grenade at Bosko, which causes him and the horse to explode into pieces, and the pieces join back again. That is quite neat timing there, I have to say. Bosko tries everything to win the race and not get defeated by his rival, and even if it involves him cheating by running on the ground and holding onto the horse. 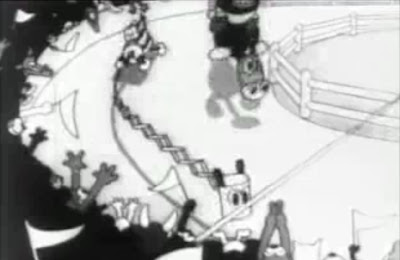 So, as it is a tight draw between Bosko and his rival - Bosko manages to win the finishing line, as the horse's head stretches and touches the finishing line. As Bosko wins and finally defeats his rival. The machine goes wonky again and Bosko falls off as the seat becomes unadjusted, and that's all folks.

This cartoon isn't really much "singing and dancing" here, as I do categorize the shorts in that era. It's more of a plot with a story. The first few minutes concentrates on nothing in the story, and then there is finally a story where it involves a horse race, and there are a few climaxes in there. Despite the fact that there is a creepy part with the "hot dog", the cartoon wasn't too bad I have to say - more or less - a bit bland.
Posted by Steven Hartley at 23:22