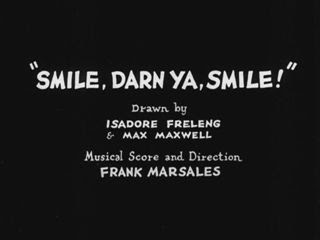 Well, this is the second Merrie Melodies in a row (as well as being the second ever Merry Melody), and it's also the second appearance that we see of Foxy and Roxy. 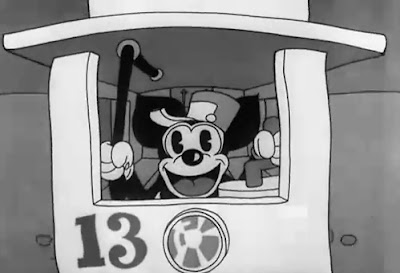 The cartoon starts off with Foxy on the number 13 trolley, and he sings the title song, Smile Darn Ya Smile in a happy attitude, and he rings the bell a couple of times, while singing the song. While he hits the bell, a cat behind the trolley uses it's tail to hit the bell a couple of times. I've noticed that Foxy's voice changes in this short, as it was a bit of a higher voice last time (with the line "Oh lady, play your mandolin!"), the voice actor here is unknown and I wonder if anyone else knows? Also the indicator on the trolley joins into the tune. 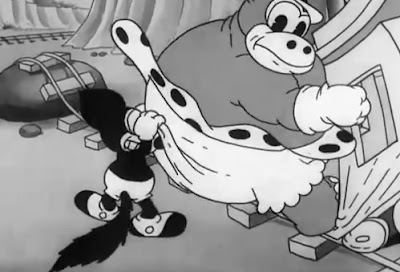 As there is a fat hippo that walks along, and then Foxy appears to stop at a junction and shouts "All aboard!", and then the hippo puts her umbrella away, and tries to step onto the trolley, and since he's so massive she can't even fit into the trolley, and so Foxy has to step inside and try to push her in himself. As that didn't work (and the hippo nearly squashed Foxy), he pulls out a pin from her ha and jabs it in to her stomach and she burtss and gets smaller and thinner, and that her blouse doesn't even fit her. She complains to Foxy (and it's speaking English backwards) and she walks off disgusted. 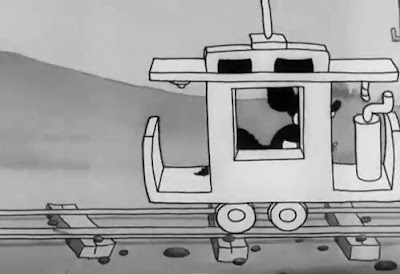 So, Foxy laughs at the burst hippo as he walks off, and so Foxy jumps back on the trolley,  runs with it, and then jumps on top of the car with wheels and jumps back on, and he gets back on with his job. 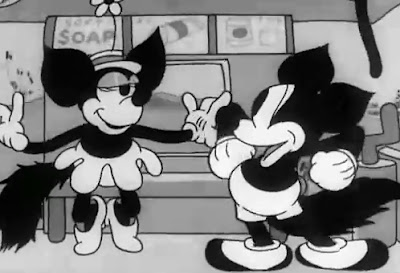 The next trolley stop has Foxy's girlfriend Roxy who pops along and joins with Foxy on the trolley trip along and they start to sing the song Smile, Darn Ya, Smile as well - as a singing duet. But at first they meet it each other, they sing a well-known song Good Morning to You, and they even say a line to each other "I'm glad to see you," feels very soppy to my tastes. 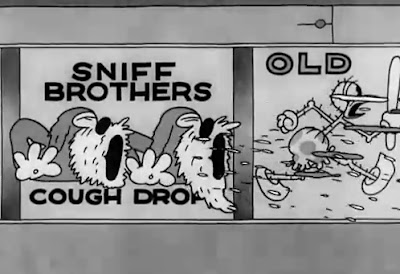 Even the advertisement billboards come to life themselves, with a dog from an ad. called "Narrow Collars", and then there are these two other animals in an ad. called "cough drops" that have a cold and then they sneeze so violently that the bird in the advertisement on their right - all of the bird's feathers come out. That is a very clever gag itself, and I like it very much. So, the bird hits the dogs in the heads with a bat one at a time with the word being sung "smile (bonk on the head) darn ya, smile (bonk on the head)".

There appears to be another dog in a billboard sign with the ad saying " Risk Tires", and laughs at the scene going on in the advertisements on their right, and then a skeleton from a grave in a billboard sign laughs at that as well, the slogon on that billboard said "Ask the guy who owns one!" Oh, I should point out that the billboard gags were by Bob Clampett, at least according to him in an interview by Michael Barrier and Milt Gray, and Clampett would've been 18 and his first screen credit as an animator didn't happen until 1934. 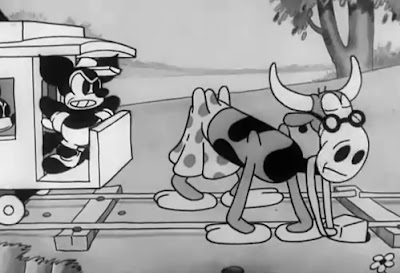 So, Foxy and Roxy continue to ride along the tracks and then they come pass a cow with spectacles that is just standing in the middle of the road just chewing, and Foxy wants him out of his way, and he brings the bell and nothing happens, until the cow spits at the trolley, and the front part breaks down, and then Foxy pulls it back up and fixes it. 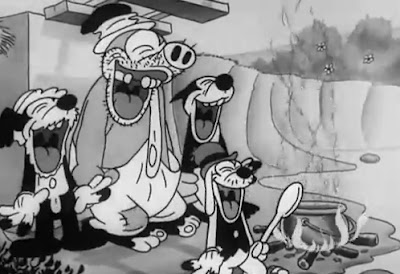 In the meantime, there are a couple of tramps who are just underground the railway tracks from the delayed trolley where Foxy and Roxy are, and the tramps start singing the chorus to Smile, Darn Ya, Smile and while they are singing the verse, there is one scene of a chicken in a pot singing and then the dog tramp hits him on a head with a kitchen spoon. I've noticed a background error, that in the layouts during the shots of the tramps singing, the first shot shows a pot boiling, and in another shot with the hobos - the pot isn't there, and then the next shot with them after that, the pot returned. Sounds like a mistake made by the crew.

As Foxy thinks that time is wasting, and is asking for the cow to move, and as the cow won't move, he steps out and thinks of an idea and then his idea comes, and that is to move the trolley to step back, and then make a run up and dive under the cow, and then they make it - even though the cow walks away uninterested, which is an often repeated attitude in a Harman-Ising cartoon. 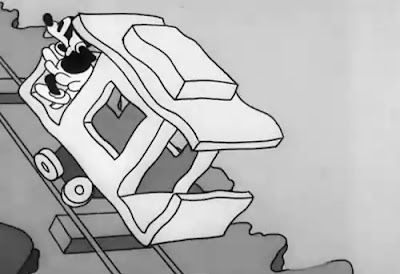 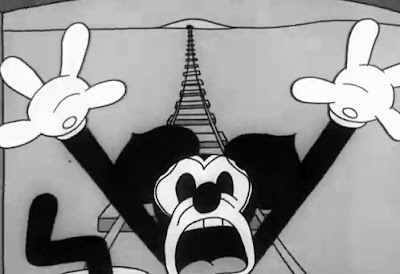 Roxy is still crying for help, and Roxy is trying his best to figure out how to control the machines to halt, and nothing is working at all, which leaves their lives in danger and that the trolley could crash any minute. Foxy and Roxy are in panic, and as they are going through different caves, it was reused from the short Box Car Blues, and as I got before in a comment; the tunnel scenes were from Trolley Troubles an Oswald cartoon by Harman and Ising in 1927. So, Foxy is now crying for help, and then in a shot, the tracks end at a steep cliff and the trolley falls off and Foxy screams, and his mouth goes right at the camera, and... 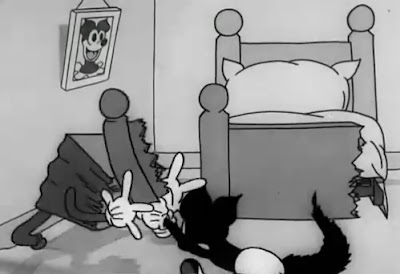 Foxy is back into reality, and all the danger scenes of him and Roxy were just a dream, and he falls off the bed that was part of the dream. The radio is still singing, Smile, Darn Ya, Smile and Foxy is sick of hearing that song, and he smashed the radio by ripping off one of his bedposts, and laughs with a quick iris out and that's all folks!

This cartoon was probably a better cartoon than Lady, Play Your Mandolin - it was actually a cartoon that I've heard of since I was 9 years of age, and I've always wanted to see that, and the Foxy cartoons - but it wasn't the best to my surprise when I did first see it. I've sort of always wanted to review this, and I have now.

I supposed that Harman-Ising had a directing habit of recycled animation, and it was part of the Great Depression where they saved money, and I guess some of it works and some of it doesn't work. The story has a similiar plot to shorts like Sinkin' in the Bathtub and Box Car Blues.
Posted by Steven Hartley at 22:36