A new Merrie Melodies cartoon that hasn't got Foxy in it, this time it's another brief character, Piggy. 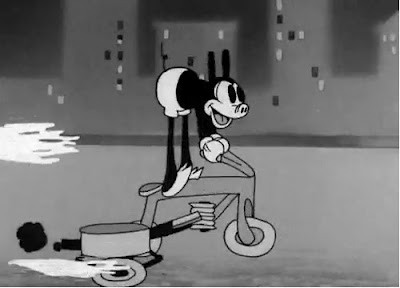 The cartoon starts off at a music hall where there is a lion conducting music and there appears to be a jazz session going on (there is even a rabbit who taps the conductors' butt cheeks for drum rhythm), and then the music continues. There is a huge crowd gathering in the theater. Meanwhile, Piggy (our new character) is riding on a type type of motorbike is driving to his girlfriend's house, Fluffy.

As soon as Piggy parks outside Fluffy's house, the fumes almost explode and Piggy jumps. We see Fluffy in silhouette powdering, putting makeup on, and humming to music. There is a gargoyle on a fountain that Piggy is standing near, and he pushes it's belly button and then the gargoyle comes to life playing horns (which could be another type of doorbell??). Fluffy is ready for the date out and then they go on the motorcycle. 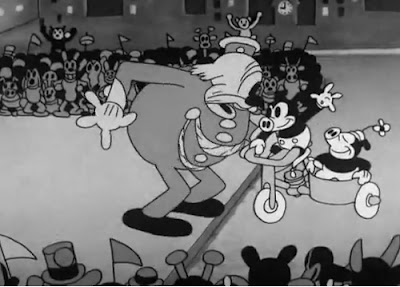 As soon as Piggy and Fluffy arrive outside the theater with crowds in the background, the motorbike has a bumpy stop and the usher laughs at the motorcycle and at Piggy and Fluffy, too. The usher realized that it was rude to laugh and covers his mouth, and then allows Piggy and Fluffy to go through. They both ignore the usher and then the car ignores him and walks under his leg and then dust comes out of his exhaust pipe (like a fart?) and then the dust from the motorbike covers the usher in black, and it's a black face stereotyped, and he shouts to the audience "MAMMY", they used the repeated gag that was used in earlier Bosko cartoons - AGAIN?? Ok, this is getting tiring the whole "Mammy" concept.

Notice that the crowd in the background at the start of the scene are cheering and waving their arms around, for a while there is ahuge freeze frame that lasts seconds, and until the usher cries "Mammy" the crowd start laughing. In my opinion, this is a very bad freeze frame, I guess that the crowd had to be quiet and not too much, and that animation wasn't go great in 1931, but not a freeze frame that matches so badly. I also noticed that the scenes of the crowds cheering feels like that there were no "inbetweens" placed on the key drawings. 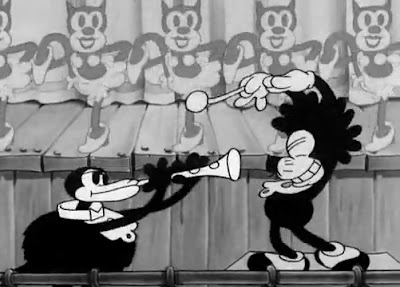 As soon as Piggy and Fluffy enter the music hall, they come to the front where they see a hippo playing a trumpet (part of the orchestra). He pulls his bib and then it rolls up and hits the hippo on the neck. The hippo is complaining (this is speaking in a different language backwards?), and then Piggy and Fluffy laugh.

On that picture above, there is something that bugs me, and it's the dancing cats doing the can-can. What puts he off is the colour used ion the stage, I mean - what are they? Are they ghosts? The colours don't match very well, and it makes me think what type of ink did the inkers use? 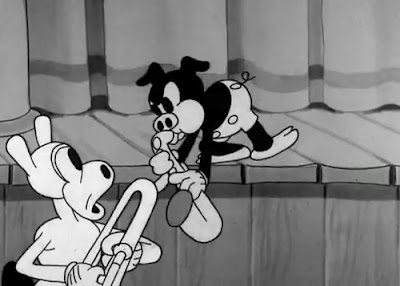 As soon as the music finishes, everyone in the hall applaud and enjoyed the music. All, except Piggy who razzies at them and comments about them, "you don't know what you're doin'", and I guess what he means is that they have no taste of music, and don't even know what bad music he thought they were playing. Fluffy seemed annoyed by Piggy taunting them, as you can see in the facial expressions.

There is a trumpeter in the orchestra, who seemed offended by Piggy, and communicates to him by playing the trumpet with the sound going "Oh yeah?", and then it seems that Piggy and the trumpeter communicate towards each other through the woodwind instruments, Piggy using the saxophone, and the other with his trumpet. 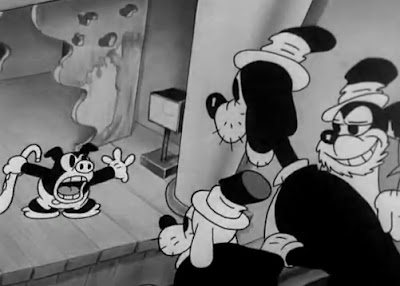 Meanwhile, there are three drunken dogs on top of a balcony, who appear to be making annoying sounds and laughing, and then one of the drunks sing a verse on You Don't Know What You're Doin' and the other drunks join in. Piggy starts to sing the tune too, and they are singing the song through argument. Huh, I don't know the lyrics too well, but the title song would work for an argument. 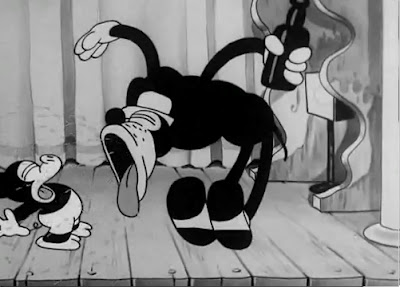 After the drunks have finished singing, there is a round of applause from the audience who liked their singing, and they throw objects up as part of the cheering. One of the drunks jump off the balcony and lands on stage with Piggy. The dog takes a drink out of his booze and then shows his breath on Piggy's face, and causing Piggy to go dizzy. The breath causes Piggy to go drunk, I never really thought of breath of alcohol can get you drunk, mind you I've never drank alcohol so I don't know. There is some good acting here, and the fact that when the dog shows his stinky breath, it really looks like it smells bad. 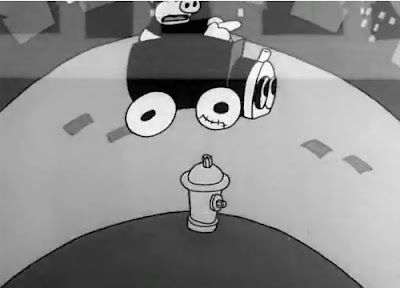 Piggy and the dog both step outside int he streets, Piggy is holding out a bottle of alcohol and pours it in his tank like gasoline, and then the car starts to breathe (voiced by Orlando Martins), and then the car starts to run like crazy. Piggy starts to chase after the dog, with a crazy animated background, and the whole part is mind of mad, and what you would see if you took drugs. The roads are even animated when there is a big hill and then when there is a small hill, it's sort of like a real acid trip, this sequence. The crazy music even adds the finishing touch. Also, the drunk also walks along wasted following the car. 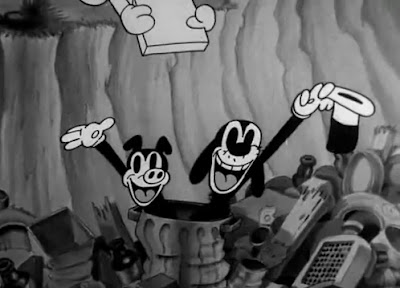 While Piggy is finally in the car, he seems to have some hallucination where there is towers and buildings that are dancing too, although I don't know if this is being shown as a hallucination. The hills are being animated for no reason, that once it goes high up, the dog slides backwards. The dog sees some type of monster (ToonZone confirms it as a sewer drain) and the dog screams right at the camera. Piggy mysteriously falls out of his motorbike and falls down and lands in a car with the drunk dog, and then the car stops at an edge of a cliff, drops them in trash bins, and then they finish the finale - and that's all folks!

This was an interesting cartoon to watch. I thought that the beginning parts were sort of bland and a typical Harman-Ising cartoon, while the second part was like an acid-trip with the crazy animation of Piggy and the dog drunk, and the crazy backgrounds. This wasn't a bad cartoon to watch, I'd say - even though it was crazy.

I must admit, I've never really was fussed about the idea of two pig characters and that they look cute. Personally, I find pigs kind of ugly - and I prefer the concept with coupled characters like foxes, mice, cats, etc. A male pig and a female pig just doesn't suit me in my taste.
Posted by Steven Hartley at 23:40