Today's cartoon informs soldiers of the potential dangers of booby traps. As indicated by Bob Bruce's narration, some booby traps are "more alluring and ingenious than others." For entertainment and educational purposes, much of the devices and traps are exaggerated - a hint for soldiers to take no chances. 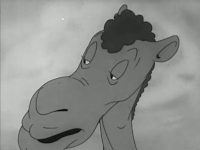 For the cartoon premise, Snafu's duty involves patrolling the North African desert. Although the base was abandoned by the Axis; a lot of traps remain intact to deceive the ignorant. Snafu however, mimics childishly: "I ain't no boob and I won't be trapped!".

Snafu's careless regard of duty is wonderfully emphasised by his carefree skip jump. To begin with, Snafu is almost deceived by a camel with a contact mine for an udder. Although Snafu realised the danger before it was too late; it serves as a foreshadow for what lies in store for him. Soon afterwards, he discovers a desert bordello, featuring multiple attractive beauties. Driven by sexual desire, Snafu lures himself inside the chambers - blinded by the potential consequences.

Much of the traps established in this cartoon are burlesqued with sexual imagery. Snafu has already been established as a character with sexual desires - and how it corrupts his concentration. Snafu's sexual frustration becomes his undoing. It's fitting that Bob Clampett is assigned to direct this entry - who utilises his more juvenile, sneaky humour to its fullest extent. 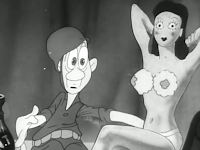 Clampett uses the term "booby" cleverly throughout the cartoon. Earlier on, the narrator remarks: "If you are a boob, you will be trapped!" - leading to Snafu's denial of his "boob" persona. In the hands of Bob Clampett, a lot of fun can be made from the word. 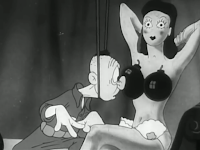 Clampett later takes the "booby traps" concept literally during the harem sequence - by putting the 'booby' in booby trap. A lot of the saucy, risque humour serves as a hilarious plot device to fool Snafu.

Snafu is seated next to a barely-clad woman - increasing his arousal. He attempts to hit her on, "Hiya, toots! What cooks!". Snafu anticipates an action of slapping her rear end, but his hand gets a bad reaction from the impact - met by Rod Scribner's funny expressions, as seen in the screen grab. 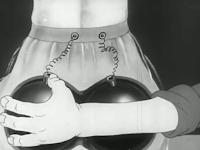 In a revealing close-up; Snafu's hand moves around the curves of the buttocks to observe the texture. Unbeknownst to Snafu, the cheeks are replaced by circular bombs. He flicks the iron of the bombs - and impersonates Jerry Colonna, "Something new has been added!".

The girl's brasserie drops - also reveals her breasts to be explosive bombs! Snafu stutters with astonishment, utilised by Mel Blanc's hilarious delivery, "B-b-b-booby trap", and screams! The sequence remains hilarious as it's built entirely on visual gags, to enhance the alluring qualities of a booby trap. It still remains a fascinating insight of the liberties Clampett took, without the interference of the Production Code. 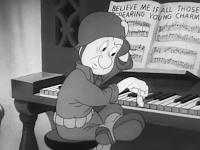 The cartoons also features one of the most recycled gags in the Warner Bros. cartoon library - Endearing Young Charms. The 1808 song, written by Irish poet Thomas Moore, has been immortalised by the WB shorts. Snafu encounters a piano, with a music sheet for the song. He attempts to play the first few notes - but hits the wrong key, which happens to be connected to a bomb device! 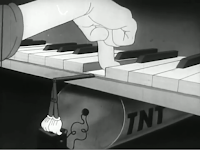 After hitting the wrong note several times, Snafu quickly gives up: "Ahh, the hell with it! I never could get that last note anywho!" - and moving on to the next booby trap. 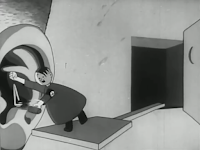 Warren Foster repeated the gag several times in some of Freleng's cartoons, notably Ballot Box Bunny (1951), and Show Biz Bugs (1957). The gag might've originated in a Clampett cartoon - but overtime, the gag was refined and timed out better by Friz Freleng for comedic value.

The gag was used to enhance funnier conflict, whether it involved Yosemite Sam or Daffy Duck. In this situation, it highlights Snafu's naivety and ignorance.

The gag continues its purpose later in the cartoon, when a Hitler-esque mechanical figure chimes the correct notes of the song inside Snafu's ear. And so, Snafu rushes inside the harem; to play the correct notes - only to end with his demise! Snafu's vulnerability towards booby traps is further exaggerated in the final gag. Even in heaven, Snafu's harp is a booby trap!

Although Clampett only wound up directing two Snafu cartoons - Booby Traps showcases some of his most risque humour that serves as his pride in his work. By putting the "booby" in booby trap; some of Clampett's more juvenile tastes adds up to a charming cartoon - supported by hysterical character animation and pacing. The use of Snafu's sexual desires to multiply his danger - works wonderfully in comedic values! At the same time, the message still serves its purpose. Each soldier must be very cautious whilst patrolling the enemy's barracks - no matter how sexually frustrated or one soldier can be.
Posted by Steven Hartley at 16:11 1 comment: