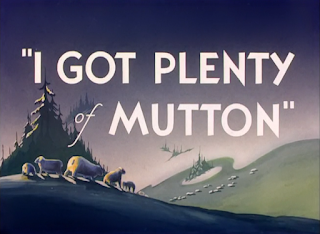 It's no secret that American civilians faced tough conditions on the home front during WW2. Rationing was enforced at a greater scale, from food resources to tires. But there was no shortage of humour, as far as the WB cartoons were concerned. A scenario involving a wolf, suffering from war-time rationing, paves the way for comedic opportunities - which will be broken down in this cartoon.


Once Frank Tashlin upgraded to making Technicolor cartoons (when B/W production ceased on the Schlesinger shorts); he slowly starts to turn his attention less on cinematic staging; and more on design and timing. His flamboyant cinematic style peaked with his B/W magnum opuses: Porky Pig's Feat and Puss 'N Booty. Maybe Tashlin felt he exhausted himself on the technique; and wanted to look for other forms of innovation. Regardless, it would still provide a unique flavour to his cartoons.

In the case of this opening sequence depicting the wolf's suffering of wartime rations, Tashlin isn't thinking just cinematically. Instead, it's how character animation and direct staging can provide entertainment. It's no secret that Tashlin was also an avid designer, and the wolf in particular has an impressive, funny design that evokes starvation - especially on the deformed chest that's hunched from the rest of his emaciated body.

The opening sequence that serves as exposition for the wolf's starvation, is enough of a showcase for Frank Tashlin's versatility and calibre. From the newspaper on the table, the camera pans to an elaborate layout of the wolf's hands pumping out water into a pot. The camera pans to follow the wolf, walking from the foreground into the background, to place the pot by the fireplace.

Tashlin's timing comes into effect in a scene of the wolf shooing away the rats, who are stealing the wolf's rations by drinking from his weak meat broth. An appropriate multiple effect drawn on the wolf is applied to capture the wolf's incessant pursuit of survival. The wolf turns the cauldron over, realising his broth is now significantly rationed to the point of a singular drop of water.  Tashlin's timing comes to aid as the wolf gets ready to take the last drop until a rat zips into the scene, and on top of the wolf's nose - taking the last drop for himself.

Tashlin's keen eye for entertainment results in how nicely executed it is. For instance, when the wolf pulls out the tureen from a dish - a mist of steam flows around the plate; obscuring what's on it. The steam unveils to reveal a pitiful, singular pea. The effect alone is both hilarious and powerful. The audience knows his predicament too well.

The wolf's frail design is taken advantage of in the following scene as he eats the pea. His frailty is so severe that the pea struggles to slide down his throat - as it zigzags across. In a vertical setup, the camera pans down to the body, with the pea landing at the bottom of his stomach and bouncing gently. With no animation on the wolf from the neck below, Treg Brown's sound work has nice touches to the entertainment values of this scene.

Tashlin's starvation sequence is a nice blend of how he directs a scene both comedically and powerfully. Some of the gags are quite sadistic, but it's executed in a light-hearted way to overlook that. Carl Stalling's score is foreboding in a sense of echoing the macabre subject of starvation. And yet, Stalling has time to apply his musical touches for comedic value - like the pea-eating gag.

And so, the wolf's delight - a newspaper headline reveals that dogs are being drafted for the war effort. An amusing photograph illustration reveals the emotional parting of the sheep dog and his flock; the latter who likely sense a premonition.

The wolf takes this chance to prey on the flock, and put an end to his starvation. Tashlin's feel for energy and characterisation are met with a series of fast cuts, to emphasise the wolf's full force and burning desire.

Tashlin already had roots with the technique, going back to his earlier directorial efforts like Porky's Romance (1937) or Porky in the Northwoods (1936). The effect was very encouraging, but less effective. By the time of this cartoon's production, Tashlin had already blossomed as a director - that the results proved successful.

Once the wolf leaps from the boulder to prey on the flock; there are a series of eclectic angles, ranging from wide-shots to close-ups. They all connect masterfully and the matter of seconds it takes, makes the result feel effortless.

Johnny Burton's camera department deserve special credit for successfully pulling off the point of view shot of the flock trucking in closer, during the dive. As a single frame, the flock are drawn within the background due to economic reasons. However, due to how quickly the shot goes; it doesn't detract from the experience at all.

After an excellent showcase of Tashlin's rapid-cutting endeavour, another niche of Tashlin takes form in the following scene. The wolf freezes at mid-air at the threatening sight of a fearless ram - who intercepts the wolf's ploy to eat the flock.

The staging of the two characters is both broad and angular. Much of the animation is kept in a held pose - save for the wolf's hysterically sheepish grin. The use of limited animation conveys the comedy in an innovative matter - the fewer the drawings, the better the impact.

The wolf quickly looks at the newspaper again, to discover the identity of the ram, as Killer Diller--the new caretaker of the flock. And so, this results in a typical battle of wits sequence; full of fun animation and layout work.

Tashlin's sense of design and caricature is used broadly in a sequence of the wolf setting up his disguise. In the scene, animated by Cal Dalton, the wolf takes on the disguise of a sheep. Dalton's animation is grotesque in a sense that it's fitting with the character. It serves a purpose. The wolf attempts to enhance attractiveness by applying makeup on; but to little effect.

The use of caricature and cartooning is a hysterical showcase of ugliness - especially when the wolf puts on fake eyelashes that are hideously long. Dalton's animation typically involved pudginess in the characters he drew - and it seems he was a natural choice for this assignment!

Once the wolf poses in front of Killer Diller in his sheep costume, he becomes his own victim! The scene presents a good case of role reversal between those characters - the wolf is in sheep's clothing, while the ram becomes a lusty wolf!

Although sexual burlesque was becoming all the rage in animated cartoons (most notably starting with Tex Avery's Red Hot Riding Hood); it was being skirted around Hollywood movies too, during the early 40s. For example, Billy Wilder's The Major and the Minor (1942) is played harmless from the Production Code's point of view, but the film as a whole it's riddled by such sexual tension and tendencies.

Killer Diller embraces the disguised wolf, and lusts seductively with a French accent. Art Davis' animation in this segment exhibits his flair for personality animation, such as the subtle touches of the wolf looking for a club to hit Killer Diller, which bursts into energetic animation of the wolf whirling in a drybrush effect, after striking the club on a tree branch.

The disguise flies off the wolf, causing him to frantically escape Killer's arms and return to his disguise - in a surrealistic, topsy-turvy pose that almost feels inspired by the Cubism movement.

The remainder of the cartoon deals with the wolf trying to escape Killer Diller's consistent advances towards him. At a time of war, the wolf attempts to dispose Killer Diller with an anti-aircraft gun, but the ram pulls him inside, to kiss him.

Unfazed, Killer Diller responds: "So what...so am I!" and howls. The sexually risque dialogue and hilarious topper of a closing gag also feels genuine. No matter what the circumstances are - love can be found in all sorts of weird places. The bona fide spontaneity and sophistication of the innuendo is what makes Warner Bros. stand out from the rest! And indeed, it predates the immortalised ending from Wilder's Some Like It Hot - which was surely coincidental. Great minds think alike!

For a cartoon that favours pantomime over dialogue; it could've been a natural assignment for Chuck Jones to direct; but Tashlin's masterful directing proves that any competent director is capable of handling such material! Despite the wartime themes, this cartoon still feels timeless due to its simplistic battle-of-wits formula. The writers at Warner Bros' ability to make light of real-world problems, like wartime rationing, is remarkable; especially when they take on a cliched narrative that becomes less cliched and more spontaneous. Amongst several sexual-oriented cartoons that occurred during this era, Frank Tashlin's take has a more sophisticated quality; whereas, say, Bob Clampett's is more gross-out, and Tex Avery's more boisterous. Overall, Tashlin's tricks of the trade resulted in a highly entertaining, spontaneous cartoon that emphasises why the Warner cartoons are worth a damn! 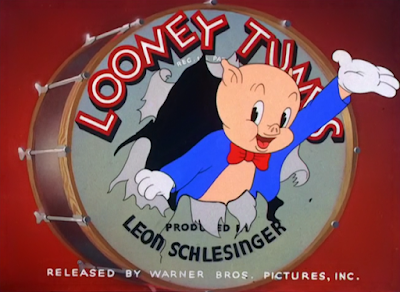