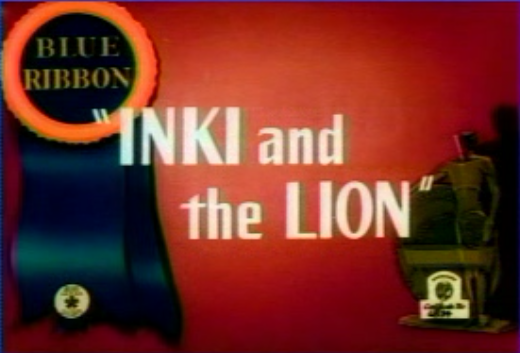 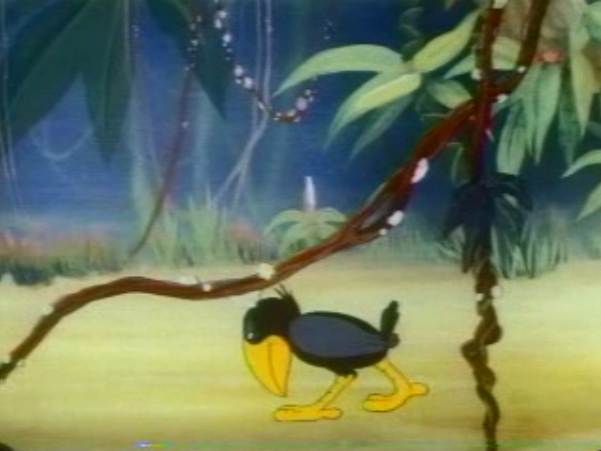 The Inki cartoons tend to show a patterned formula which is almost identical in every short. The shorts would begins with Inki hunting more vulnerable animals with his spears, but the Mynah bird catches his attention. The Mynah bird, whose leitmotif is Fingal's Cave, hops and walks in sync to the score.

The bird is symbolic in the Inki shorts, having a supernatural ability of being undefeatable. Inki would turn his attention towards the bird, but at some point in the short, he would face a more terrifying animal, which is usually a lion (an exception would be Inki at the Circus).

Despite having the exact same formulas, Chuck would attempt to make short slightly different whether it would mean using different scenarios or different deliveries in terms of gag approach.

This short, is mostly a repeat of Inki's first appearance, The Little Lion Hunter, in terms of story but Chuck invents some new situations and approaches along on the way. According to Mike Barrier's Hollywood Cartoons, the first Inki short happened to be successful amongst audiences, that Leon Schlesigner requested Chuck to produce another short. You could say this formula is almost prototype compared to the Chuck's Road Runner shorts, where the scenario and situations were no different each short, but just varying gags and ideas. This short is very much a repeat from its predecessor.

Watching the opening of the short, Inki is seen chasing after a monkey who hides on top of the canopy of a tree. Inki rushes to search for the monkey, relating to a gag where both heads are out but don't meet one another. Besides the opening formula being repeated, notice how Chuck Jones' timing and the animation being produced in his unit is becoming more liberal. 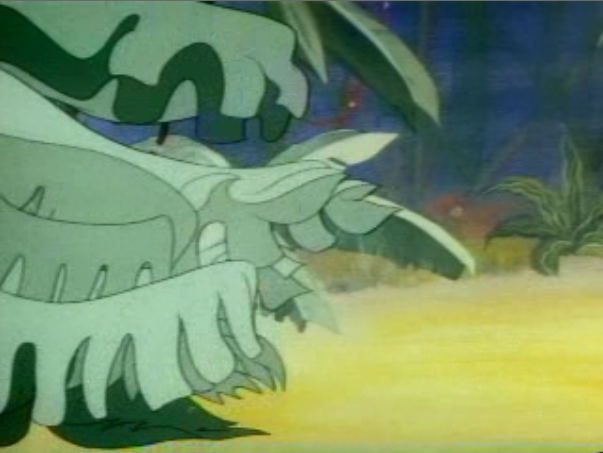 Jones shows a more comical approach for Inki such as the spear gag, where he vibrates rather jerkily.Chuck's timing is evident when Inki hears out for the rustling, crashing noises resulting in an appealing airbrush effect to emphasise his speed, when he rushes behind a tree.

When the rustling and violent effects from the shrubs continue, notice how the animation is much more broad and comical, which shows how Chuck is attempting to make his animation more humorous than Disney-fied. And so, the rustling from the bushes only lead up to a gag that actually pays off for Chuck. The Mynah bird approaches and does his hitch step, which only emphasises on the power he has, for such a tiny bird in comparison.

Chuck Jones also appears to try and find a comical approach in terms of power as well as force, which only pays off in some aspects. In the first part of the gag, Inki is seen hunting out for a baby cub who is licking its paws beside a tree.

Inki prepares to aim his spear towards the cub, but finds a larger lion's hands hold onto the spear, and knocking Inki over to the ground.

The gag itself is a little clumsy in terms of timing, as the approach isn't delivered well, as Inki didn't use enough force in order to achieve that effect, making the gag not realistically effective. The other gag, however appears much later on in the short's ending shot. Inki and the Minah bird shake hands, but the Minah bird's hand show a very firm grip which takes complete control over Inki's body, and leaving him to the ground. This was a more better approach as this once again emphasised on the Mynah bird's power, and the whirling effect made the gag more believable in devilry, whilst the spear gag didn't. 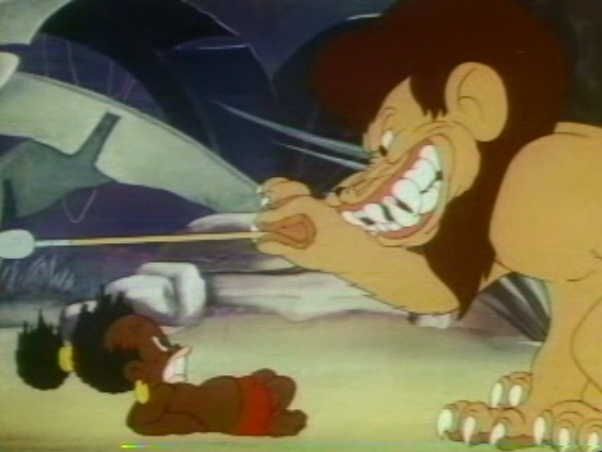 Following from the spear gag, Jones uses a great opportunity which would make up from the poor gag delivery. Inki's encounter with the lion is artistically rich in terms of Inki's point of view shots. The lion faces him upside down, but as Inki turns his head, the lion turns 180 degrees to its normal angle, thanks to the geniuses behind Smokey Garner's department.

Both Inki and the lion then respond to one another with a sheepish expression which only Chuck could master. Inki responds first with a sheepish grin towards the lion, but the lion's grim shows a much more intimidating grin, due to the largeness of his teeth, and gums. Whoever animated the scene, certainly captured the fear of this perilous encounter, the lion's teeth are very intimidating in terms of proportions and realism, and there is a great contrast in terms of size between those two characters. Inki, standing up sweating with fear, then makes a little twirl his foot before he skids out of screen. Another trait from the Warner directors, especially Chuck, where a character would attempt to act innocent by curling their foot before leaving, it makes great character animation. 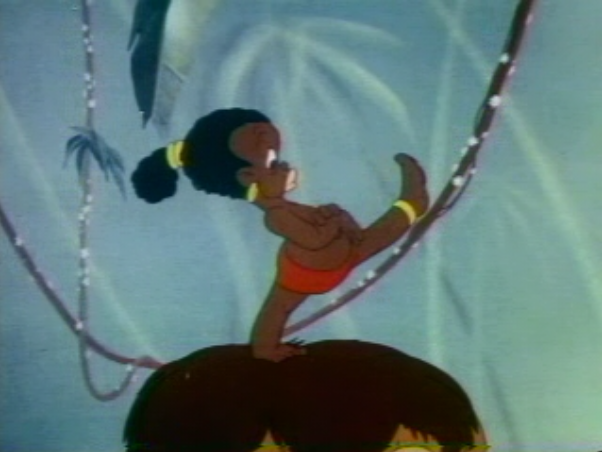 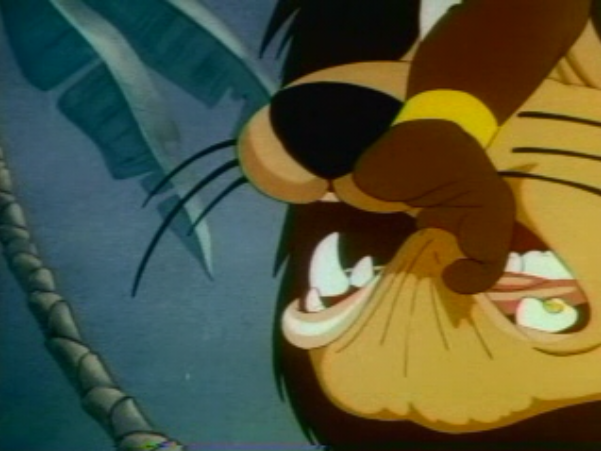 Believing that he has escaped from the lion, he proceeds to climb down the lion's head, but finds that his foot is touching the lion's tooth from his mouth. The rich character animation and gloss is evident in the scenes, to add tension.

This is a challenging scene to animate, as Inki has to act through his foot. Inki grabs hold of the lion's skin where he places it over the lion's tooth, in hope that he would be able to escape easily, despite being in a perilous situation. Inki then turns towards the right and then exits on top of the lion's head. This time he is hiding on top of a log, with the Mynah bird standing on top of his head. Inki now turns his attention towards the Mynah bird, in hopes of capturing it with his spear.

The cave sequence, without doubt is one of Jones' longest-paced sequences, where the action occurs for "long periods of time". To start off with, Inki was following the Minah bird who ends up walking inside the cave. Trying to trap the Minah bird, Inki uses the huge stones to block the entrance of the cave.

After a series of crumpling up stones to block the entrance, Inki weirdly mistakens the lion's behind as a stone in which he attempts to  push his behind to the last gap from the cave. The gag itself is flawed because of the terrible contrast with colour between the rocks as well as the lion. 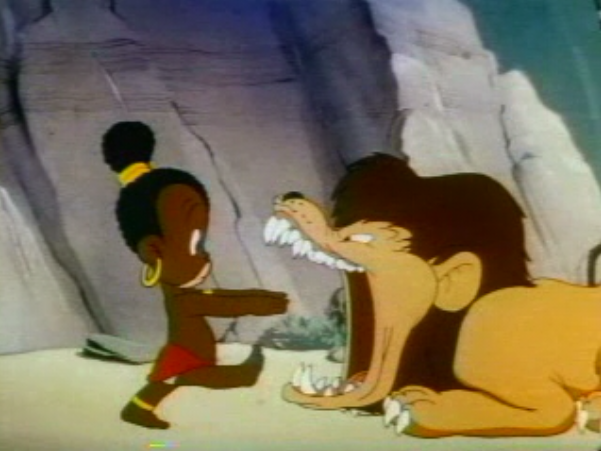 Had the cave and stones been painted like soil, then the gag would have probably worked better. Unaware of his danger, the lion looks Inki smugly, in which Inki's double-take leads him inside the cave.

Inside the cave, Jones only uses the eyes and teeth putting a lot of emphasis of black-and-white to emphasise darkness inside the cave. The animation itself is communicated well, when most of their body is in silhouette, and the sheepish expressions they make really work well. Inki then rushes outside the cave again, scrambling all the stones frantically, but finds he's been outwitted by the cunning lion. The scene then follows through a very confusing and somewhat incoherent sequence where the lion is attempting to entice Inki to walk inside the lion's mouth. The incoherent part follows when Inki ends up somewhat in a trance, and walks straight towards the lion's mouth. The gag itself doesn't pay off, having no indication or a source that casued Inki to almost go in a trance.

Only the Minah bird can stop Inki's trance from the lion's enticement. The Minah Bird breaks open the rocks from the cave, hopping to Fingal's Cave, and the lion stares at Inki out of curiosity. After the Minah Birds hops out of the scene, the lion turns towards Inki, cornering him by the wall. The lion, attempting to charge at Inki without mercy, finds however he has the inability. The supernaturalness and the power of the Minah Bird has prevented the lion, as his tail is revealed to be tied to a tree stump, therefore making Inki safe. Inki, realising the Minah Bird had saved his life, walks over to thank the Minah Bird who, as mentioned earlier, responds with a firm handshake to leave Inki whirling, emphasising his powerfulness. Though the Minah Bird doesn't have much other action other than his hopping routine, the handshake feels somewhat acceptable, and in character.

The short is very much parallel towards the first shot, so it is nothing much different in terms of story, except just new gags along the way. It feels somewhat typical to name the short Inki and the Lion, as it's no different to the previous short's title. Artistically, Chuck Jones does manage to keep it rather fulfilling, not only the animation, but the use of camera angles like the POV shots, as well as the use of colour contrast, even though it worked well in some areas, and others it didn't. The opening sequence I felt showed a lot of promise of a much, improved Chuck Jones when looking at his comic timing and liberal movement in animation. After the opening, however, it felt too slow and much like Chuck's usual cartoons he was making around that era. Overall, the short is nothing new from Chuck in terms of gags and story, and it feels as though I've already seen this short only two years previously. 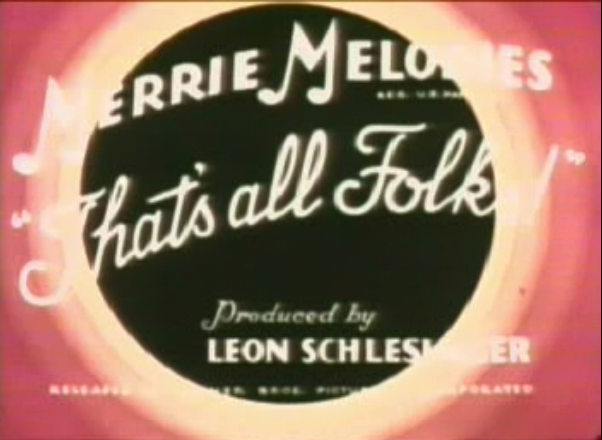