Sam Armstrong might not be strongly associated with Warner Bros' cartoon legacy - but he certainly contributed his fair share to the Golden Age of Hollywood animation. Armstrong was present during the glory years of Disney's most lavish feature productions - having worked on Snow White, Fantasia, Dumbo and Bambi. His brief tenure at Warner Bros. however, is largely overlooked.

He's only credited for layouts on two shorts: Hare-Abian Knights (dir: Ken Harris) and Really Scent (dir: Abe Levitow). Both cartoons were released in 1959, and the studio was past their prime then. 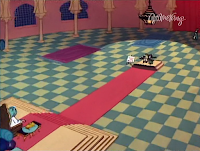 Neither cartoons are particularly outstanding. Hare-Abian is simply a filler cartoon that showcases Bugs Bunny's better performances - through clip shows. While that era might've been staled by economic factors, the layout and colour styling maintained dynamics and atmosphere.

Armstrong's layout work in these cartoons certainly channels the UPA influence that took the Hollywood animation studios by storm in the 1950s.

Whilst the influence is unanimous; Armstrong's staging evokes the talent and profession that forever earned his solid reputation as an artist and director at Disney.

Samuel John Armstrong was born on November 7, 1893 in Denver, Colorado, to parents John and Nettie Armstrong. His father, a native of England, was a travelling salesman. By 1900, the Armstrong clan resided in San Francisco. Armstrong's art training took place at the Philadelphia School of Industrial Art. According to Sam's draft registration from 1917, he worked as a commercial photographer for the Los Angeles Express Tribune. He lived in Tacoma, Washington from 1918 to 1929, where he worked as an art editor for the News Tribune. In 1923, he founded the Armstrong School of Art in Tacoma. By the 1930s, he had moved to Santa Barbara where he painted a mural for Amy C. du Pont's home, nearby Montecito. For more information on his mural work, see Yowp's post here:

For most of his life, Armstrong lived with his mother - and he resided in Glendale during the 1930s. The U.S. 1940 Census indicates that Armstrong and Nettie (his mother) lived in Valley Spring Lane. At one point, he was a neighbour of Adrian, an infamous costume designer for a number of MGM features. 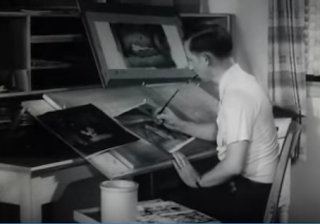 Sam Armstrong joined the Disney Studios in the publicity department on June 6, 1934, and soon afterwards he transferred to the background department. He painted backgrounds for various shorts, like The Country Cousin and The Old Mill.

Walt clearly admired Armstrong's talent, as he was blessed with the position of supervising the backgrounds for the studio's first full-length feature, Snow White, for which he was responsible for "approximately two-thirds of the key backgrounds." For the promotional film, A Trip Through Walt Disney Studios, filmed in July 1937 by Bill Garity - Armstrong is briefly seen painting a watercolored background for an interior of the dwarf's cottage.

In a rare 1939 interview that was recently published in Didier Ghez's Walt's People - Volume 20, Sam went into great detail about the background process that embellished Snow White. He spoke in great detail about the experimentation of colour and the search for a subtle atmosphere, which would be a huge step up from the Silly Symphonies.

In one passage, he said: "I had many, many conferences with Walt about the thing he had said all through the earlier inceptions of the work that he wanted the color kept almost monochromatic. He felt that we had overplayed our hands in coloring the shorts and that in Snow White, it being a long picture, and still being an unknown quality, in cartoon form, he thought it would drive the audience out of the theater if we used the type of coloring that we used in the shorts up to that point."

Sam was later made a director on the "Toccata and Fugue" and "Nutcracker Suite" segments in Fantasia. Don Lusk, an animator on the "Nutcracker" segment, saw a different perspective of the director, when Joe Campana and myself spoke with him on September 9, 2017. He recalled:

"His mother would bring him to work, and his mother would pick him up [every day]. He was the director [on the fish ballet], but I never knew anything he directed. Walt directed it. Sam didn't know anything. I don't know what the connection there was. We'd go into the sweatbox and run [the rough animation] I'd done. And Walt did all the talking. Sam never said 'boo'. I don't think he knew how to say it."

Unfortunately, Armstrong isn't remembered fondly by some of his former colleagues. Maurice Noble thought he was a "selfish, ambitious person". He also recollects his brief tenure at Warners: "One time, many years later, I was working at Warner Bros. and that's the last time I saw Sam. They were considering hiring him for something, to do some layout work or something like that. It turned out that he was too ingrained with the Disney snob. And he couldn't fit into what we were doing at Warner Bros. He came in and saw me in my room a couple of times. Then all of a sudden he disappeared and that's the last I ever saw of Sam." Although Armstrong's career at Warners was relatively short-lived; none of the layouts for those two cartoons suggest his failure to adapt to the stylised look.

Armstrong left the studio on September 12, 1941. Little is known about what jobs he took between leaving Disney's and his brief tenure at Warner's. In 1951, he did illustrations alongside ex-Disney employee Riley Thomson for a Woody Woodpecker children's book, Peck of Trouble. Joe Campana's research indicates that Armstrong might've worked briefly for John Sutherland - but when he worked there, or how long his stay was - I don't know. He never married. There are several conflicting sources regarding his death - but based on Joe Campana's reliable research, he died on January 24, 1977 in Los Angeles, California.

(Thanks to Yowp, Didier Ghez, David Johnson and Joe Campana).
Posted by Steven Hartley at 04:52 4 comments: