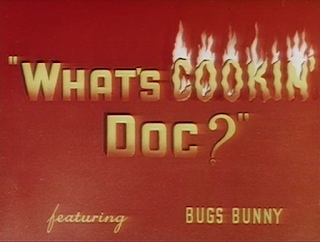 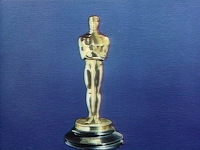 The Oscars are a mixed bag of opinions. Some will consider it a prestigious ceremony that sets the standards by which all movies are judged. Others might see it as politically driven or biased - especially Bugs Bunny in this Bob Clampett cartoon. 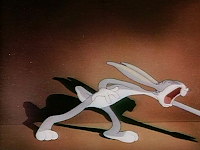 The Warner Bros. cartoon studio didn't win an Oscar until 1947, for Tweetie Pie. The shorts had been nominated beforehand, but were always overthrown from the multiple Oscars won by Disney during the 1930s, and MGM's Tom and Jerry series throughout most of the 40s and 50s.

What's Cookin' Doc feels like a subtle allusion to the studio's lack of success with the Oscars; with Bugs Bunny portrayed as a symbol of disdain. I don't doubt a lot of cartoon studios felt that competition was biased - as expressed from Bugs' words; "It's sa-boh-ta-gee". For the film's premise; Bugs Bunny is competing for an Oscar awarding the Best Actor in a lead role - but angrily demands a recount after the category is awarded to Jimmie Cagney. Cagney had won an Academy Award a year prior for Yankee Doodle Dandy. 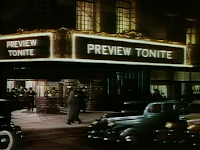 The Oscars as a subject of satire in a Warner Bros. has comedy merit - with Bob Clampett being an interesting choice for director. Unfortunately, it appears this short is a victim of Clampett's haphazard management skills. It's no secret Clampett was typically a cartoon or two behind the studio's schedule. His wartime filmography consists of both masterpieces and "cheater" shorts.

This cartoon is frustrated by its obvious use of cutting corners. New animated footage is reduced extensively - with stock live-action footage and extended clips from older cartoons compensating the cartoon's screen time - and likely its costs. 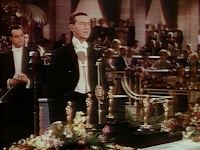 The first two minutes are made up of newspaper/magazine cuttings and live-action footage taken from establishing shots of Hollywood, featured in David Selznick's A Star is Born (1937). Technicolor footage from the film works effectively enough in its attempt to deceive audiences from the idea of stock footage.

Despite economic constraints hampering the cartoon - Clampett at least tries to benefit this with the occasional gag. In one scene, a wolf howls at the night sky; a deliberate misplacement from night shots of Hollywood landmarks. The narrator gets caught up in the moment: "Well, how did he get in here?"

Later in the cartoon, a clip from an early Bugs Bunny/Friz Freleng cartoon: Hiawatha's Rabbit Hunt eats up a part of the running time. The clip is meant to showcase Bugs Bunny's "best scenes"; which involves Hiawatha attempting to cook Bugs - whose crudely drawn in one of his earliest cartoons. Of all Bugs Bunny shorts prior to 1944 - is this really the best example of Bugs' funniest moments? Unless, in Clampett's case - it could be savagely ironic. 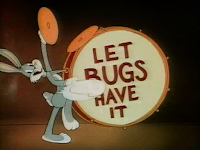 Bob Clampett portrays Bugs Bunny as arrogant and egotistical, in a similar vein to Tortoise Wins by a Hare. Both shorts showcased Bugs' frustration and delusion. Clampett experimented with different personalities and behaviours for Bugs, for the sake of his directing style - that either worked or backfired. For this short, at least Bugs' ego problem is built from strong characterisation. 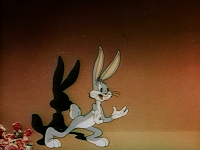 Bugs Bunny is deluded to believe that the voting system is rigged - as he demands a recount to the Academy voters. Bugs' pathetic attempt in staying humble is wonderfully felt as he says: "I'll leave it up to youse intelligent people in this audience, whether I deserve the Oscar or not!".

Bugs' arrogance is displayed comically as he charades across the stage - in a desperate attempt to plead the audience. He starts off in boisterous fashion as he bangs on a drum, reading: "Let Bugs Have It"; and soon showers them with free cigars. But, the audience "give it to him" by throwing an abundance of fruit and vegetables at Bugs. 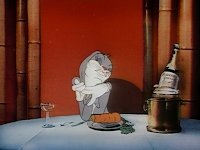 The minimal use of animation in this cartoon is blessed by Bob McKimson's top-notch draftsmanship. Like Falling Hare, McKimson's gives Bugs at the dining table humanistic qualities through his animation. Bugs' interaction with the audience is believably communicated. Beautiful little touches like Bugs acknowledging the ceremonial fanfare to the audience, is enough to give him your undivided attention.

Bugs is self-confident by the thought of winning an Oscar, "it's in da bag; I'm a cinch to win". Bugs begins mimicking iconic Hollywood stars like Katherine Hepburn, Edward G. Robinson and Jerry Colonna, not only by their mannerisms - but in caricatured form, too. 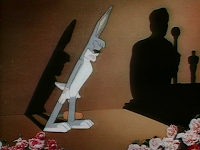 Animating caricature is difficult enough, but McKimson's ability to morph Bugs' face into movie stars, without losing its appeal, is an astounding effort! For a character that consists of familiar stock poses, it's a surrealistic, unorthodox gag only Clampett would dare to tackle, and quite possibly achieve - thanks to McKimson's draftsmanship!

McKimson's animation continues to shine in the following sequence of Bugs self-assuringly insisting the host's comments of "consitently high performances" are directed at him. The host, seen in silhouette, points out the "actor's" attributes for drama, comedy, romance and being "equally good in character roles".

Bugs' over-confident nature shines by wanting to prove he fits that profile through his zany charades. At one point, Bugs morphs and mimics the mechanical traits of Boris Karloff in Frankenstein. And so, Bugs breaks into a flabbergasted take when it's revealed that the Oscar was been awarded to James Cagney instead. Much of the attributes indeed fit with Cagney's screen persona - who had a knack for melodramatic performances, like The Public Enemy, or comedy such as The Bride Came C.O.D.

Some of Clampett's more dirtier gags goes unscathed in this cartoon. When Bugs tosses pile a film cans to "Smokey" (a nod to cameraman Smokey Garner); a "stag reel" is projected on the screen. The gag itself has aged through the years as attributed to many factors like the sexual revolution; but its context remains risque.

Bugs' defensive reaction as he yells, "HEY!" is priceless in capturing Bugs' embarrassment and pervertedness. To fool the censors; an illustration of a deer stag for the title card is a funny touch to hide its suggestive scenario.

For the final scene; Bugs is given a "boozy prize" Oscar, shaped in the form of Bugs himself. Bugs cherishes and caresses the statue; by romantically saying: "I'll even take you to bed with me every night". The statue comes to life, quoting Bert Gordon's Mad Russian, "Do ya mean it?", and puckers Bugs on the lips. Clampett's rapid firing spontaneity provides charm to that innuendo.

The newly animated sequences contains elements of Bob Clampett's eye for entertainment. Bob McKimson's animation is sublime for refining Bugs' egotistical persona. Despite some of its values, the cartoon holds up as a lacklustre in comparison to Clampett's better works. Its economical factors involving the forced use of stock footage and an old clip brings this short down in that retrospect. Clampett attempts to make up for it with some entertaining sequences of Bugs - framed in a way to make a cheater cartoon worth watching. Not a terrible short by all means, but without Bugs' appearance, there really isn't much to recommend in this cartoon. Despite what the title suggests, consider this an underwhelming short. 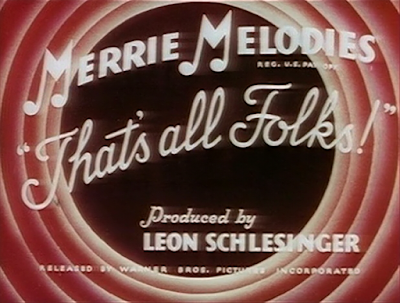