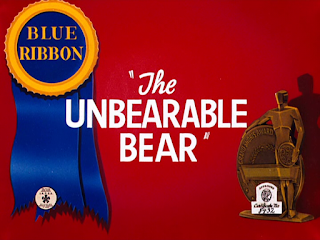 Once Chuck Jones had reformed into a talented, comedic animation director - it seems he attempted to take his own characters into that comedy angle...especially on Sniffles who was known previously for having mawkish, Disney-ish qualities and facing vulnerable situations.

Instead, he is given a different persona which is a throwback to the late 30s shorts of cute, inquisitive characters who are compulsive talkers that are a nuisance to those around him. 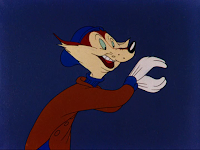 The persona is a throwback to the late 30s characters Tex Avery had conceived in shorts like I Wanna Be a Sailor, and of course: Friz Freleng's short-lived Little Blabbermouse character. It wasn't a funny or engaging personality back in 1940; but by the time the Warner directors were hitting their stride in 1943 - the characterisation was put into better use depending on what narrative was told. In the opening sequence of this short where a Cockney fox burglar attempts to steal money - the compulsive talking personality works. 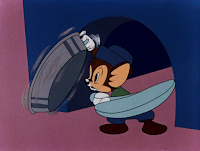 To some extent Sniffles' fast-talking becomes an important dilemma as far as story goes. In the opening sequences; a fox burglar's attempts at raiding a house unnoticed goes foiled when he encounters Sniffles as he attempts to open a safe lock.

Caught, the fox burglar spontaneously tricks Sniffles into thinking he's Robin Hood, providing an cover-up motive: "As robs rich blokes for the benefit of the poor, I am." For what it's worth, Cockey accents are very rarely performed by Mel Blanc - who as usual excels in the dialect and stereotype. Sniffles agrees to watch out for the fox and protect him: "I'll stand guard. If anybody comes I'll warn you, like this!". He grabs out a spoon and bowl and produces unwanted noises out of it. His naiveness would prove an essential role as far as story arcing goes - distracting the fox from his principal goal.

And so - Mike Maltese's story becomes even more episodic when the drunken husband bear returns home. Once he changes into his nightwear - he opens the box to bid an intoxicated "good night" to the fox hiding inside. Had the fox not been inside the box - it's a hilarious notion of the bear's drunken behaviour by bidding farewell to a box.

In a double-take; the bear zips back and points his pistol at the fox's mouth. As though the story doesn't get more episodic - the suspenseful scene is interrupted by a sleepwalking wife bear. 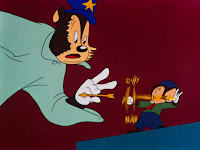 The police bear warns the fox: "Hold still, ya little runt! If we wake the missus now, we're a couple of dead ducks!". This is backed up in an earlier sequence that is complete exposition - explaining the husband's fear of his henpecking wife.

The wife bear was fast asleep in her bed with a rolling pin on her bedside, murmuring in her sleep: "Wait till I get my hands on that brood, I'll teach him to stay out all night - gallivanting around."

Meanwhile Sniffles misinterprets the sleepwalking wife as an enemy of the fox (who still believes he's as Robin Hood) and attempts to finish her with his small bow and arrow. The fox and the bear grab Sniffles and silence him while the sleepwalking mother is in their presence.

For an animated short, it's a rather complex storyline: a fox burglar has to avoid getting caught by tricking a suspecting Sniffles into thinking he's Robin Hood; while attempting to avoid himself from the hands of the police bear, whose avoiding his sleepwalking wife out of fear of waking her up. For a talented writer like Michael Maltese - he takes advantage at such a feat by conceiving potentially funny gags out of it.

As usual; the innovative "avant-garde" styling of the cartoon is expert work amongst John McGrew and Gene Fleury. McGrew's layouts for the opening sequence feel like cardboard props on a theatre stage; such as the trees outside - and the advantages of the interior scenes is it doesn't have too much background interference. It's Fleury's colour styling which makes a marvellous addition to McGrew's layout styling. 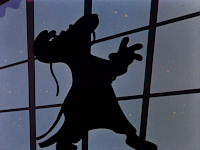 Scenes like the fox casually smoking his cigarette outside while waiting for the household lights to switch off - is beautifully and intricately staged in order to give the fox a more sinister appearance. The animation effects of the cigarette reflection is the perfect finishing touch. It shows two artistic masterminds laid bare.

The sequence of the drunken police bear staggering back to his home is another example of excellence graphic clarity. The action is entirely in silhouette; and the poses read well. Not only is the staging exceptional; but the lighting and tone blends in wonderfully - capturing that dark, vague feeling of being intoxicated in a dark room. It's another homage paid to the low-key lighting of motion picture filmmaking - as evident in the darkness of the windows. The darkness of the sky is kept to a blue shade so the colour contrasts of the silhouette action is kept subtle.

Chuck, who excelled in the pace of Warners, was never afraid to challenge himself as far as timing goes - as evident in the radio switching sequence. After his encounter with Sniffles; he attempts to carry out his plan by working out the code for the safe lock. Sniffles attempts to cooperate by switching on the radio - which he mistakes for another safe lock.

Alarmed by the infamous Frat Stalling cliche - the fox streaks into the scene by wrapping the radio with a pillow, and tying up Sniffles with bandages - to prevent such further disturbance. It's an appealing, intricate piece of drybrush work with a rapid appearance of 20 frames, and all on 'ones'.

Chuck Jones' experimentation for outlandish expressions are always key to not only giving his characters some extra personality - but also for striking effects. The double-take of the drunken bear ascending the stairs is an example; but the most valiant would be the fox's take to Sniffles' banging noises on the bowl. The fox reacts with a triggering effect that nails the essence of unwanted disturbance and the fear of getting caught beautifully. 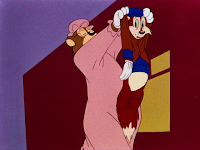 For the sleepwalking scenes - Mike Maltese and Chuck Jones work together in formulating some gags to reflect the wife's daily chores routine. In one scene, the wife unknowingly carries the fox hiding from the box and takes him outside to get scrubbed - mistook as a piece of laundry. The hysterical facial expression on the fox as he's being carried away speaks for itself.

The posing on the fox has some nice subtleties as he squirms while being hanged on a washing line.


Another great gag is centred on the wife bear carrying her husband after his long fall from the basement. She sleepwalks towards the fireplace and dumps him there on the floor. The husband raises his mouth to appear in the form of the bear rug - resulting in a funny visual gag from Mike Maltese's taste for irony.

For a climatic sequence; the sleepwalking starts to take its toll and threat towards the husband. Once the bear sobers up and makes direct eye contact with the fox - this builds up to a chase sequence around the house. In an attempt to rid him; the bear grabs an axe hanging on the wall - and hides behind the wall to inconspicuously finish him.

Maltese conceives some great delivery for some suspense-build up as the sleepwalking wife walks into the fray - causing the husband to almost strike his wife with an axe.

Meanwhile, Sniffles enters into the scene again - as he once again: mistakes the bear's actions as an enemy of "Robin Hood". He fires his arrow which targets the bear's rear end - causing him to hit his head on the wall-mounted shelf and leaving pieces of china floating in mid-air, awaiting its destruction. Incoherency and cartoon physics takes its toll when the bear and the objects abruptly halt in mid-air - as the sleepwalking wife walks past the scene. The bear motions again to collect the shelve pieces still standing in air.

After a series of chases with the fox - the husband bear is about to meet his fate as he accidentally strikes his sleepwalking wife with an umbrella (which the fox is clinging onto). At the summit of the wife's wrath - she observes the fox around her shoulders, which she mistakes as a sincere present from her husband.

The scene of the wife building up her wrath which only sinks down into happiness and affection is a brilliant team effort, from not only the animation but Stalling's musical score, too.

At first perplexed, the husband bear decides to play along as he turns back coyly while his wife admires the "fox fur" present. He goes so far along with it to the point he knocks on the fox's head, leaving him out-cold, for the sake of his wife's satisfaction.

The ending scene however, are another throwback to the Little Blabbermouse shorts where the compulsive talker will get justice from irritated characters who'd put up with him throughout the short. In this instance, the husband bear places his police hat on top of Sniffles. Despite an inventive approach of the compulsive talker in keeping up with the brisker pace of Warners - the ending itself feels somewhat uninspired and limp.

For a narrative which is very episodic - Mike Maltese masterfully paces and blends the story together whilst still making room for funny gags. Chuck continues to do an ambitious albeit successful job at directing and yet it appears he isn't yet ready to let go of his own characters like Sniffles or Inki - who slowed him down and gave him limitations artistically. While the compulsive talking personality works fine in this cartoon, the short also take much advantage of Sniffles' screen time - and appropriately limits his role in the cartoon...as the comedic values centred on the bear couple and the fox were too valuable. Admittedly, had Sniffles not appeared in this short - it's doubtful the short would suffer much at all. 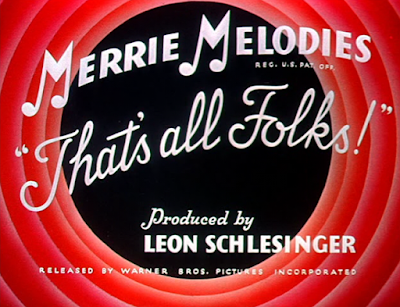