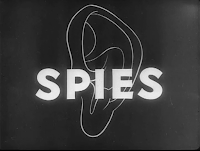 Synopsis: Private Snafu has a secret, and is determined to secure it. However, his loose tongue become an advantage for spies hiding at every corner.

Whilst Private Snafu is the epitome of little common sense within the army - Spies is the definitive representation of "loose lips sink ships".

The potency of spies was an integral lesson during the Second World War, especially through propaganda. British cartoonist Cyril Bird (known as "Fougasse" by pen name), satirised the concept in a series of propaganda posters called, Careless Talk Cost Lives. Many posters featured Nazi henchman or spies eavesdropping at highly improbable places of each locale.

Whether or not Theodore Geisel or the Warner Bros. staff were familiar of the posters is unclear, but through sheer creativity; their concepts of improbable hiding places are excelled. 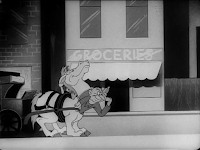 The short's premise is centred on Snafu receiving a military secret. We never see him being informed of the secret, as the exposition indicates he's already being informed; in order to keep the continuity and pacing at a brisker pace. Snafu is firm about keeping the information privately, but his incompetence and ignorance always gets in the way.

Geisel visualises the spying concepts hilariously and inventively that sets the comedy up wonderfully. Snafu impulsively talks about his military secret, underestimating the various objects surrounding him - like an unattended pram or a horse dummy.

In unison, several spies arise from their hiding locations, declaring: "The soldier's got a secret, and I bet we find it out!". Unaware a spy is hiding inside a phone box, he informs his "mother": "Hello Ma, I've got a secret, I can only drop a tip / Don't breathe a word to no-one, but I'm going on a trip."

So, as Snafu reaches a newspaper stand, he informs the owner he's travelling by ship - much to the interest of eavesdroppers caricatured as Benito Mussolini, Herman Goring, and Emperor Hirohito. Chuck Jones applies a very subtle effect of showing the trio's faces as front covers of the magazine. Once they lower the papers, they're facial features vanish from the print.

Ted Geisel's use of rhyming scheme, and Chuck's visualised gags are utilised together well. In Snafu's opening dialogue: "I just learnt a secret. It's a honey. It's a pip! / But the enemy is listening, so I'll never let it slip / 'Cos when I learn a secret, boy, I zipper up my lip", Snafu literally zips his mouth shut; making the gag visually appealing towards army recruiters. 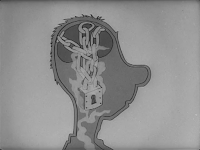 Other innovative forms of visualisation appears in a diagram of Snafu's brain locked with "a padlock and chain". It creates a stunning visual metaphor that blends with Snafu's determination.

The gag comes to greater effect in a latter sequence of Snafu getting intoxicated at a bar. The spirits pouring inside Snafu's body begins to evaporate, causing the vapour to steam towards Snafu's brain. The vapour circulates the padlock and chain to dismantle. Not only is the scene inventive for visual storytelling, but it's an accurate portrayal on how manipulative alcohol can be to one's mind. The suspense is built appropriately towards Raymond Scott's infamous Powerhouse, with Chuck's timing coordinated with great care. 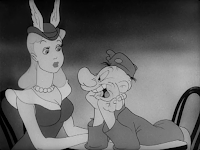 Once Snafu's consumption of alcohol has taken its toll; he drunkenly approaches an attractive woman, full of lust. As noted before, the sexual qualities of women is a key theme to the Snafu series. Although the blonde's portrayal as a sex tool to distract Snafu might be considered derogatory today - it still builds up the suspense fittingly. 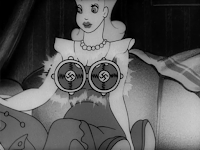 Snafu accidentally reveals the location of his trip as he lusts, "I hope I meet some babes in Africa, s'cute as you are!". Typing on a miniature typewriter underneath the table; the blonde spy hands the note to a messenger dove once disguised as a glamorous feature on her hat.

As derogatory and yet creative the gag is; the short emphasises the dangers of strangers resourcefully - especially with babes. Bobe Cannon's work in the latter sequence requires a great deal of analysis - and yet he pulls it off effortlessly. He wonderfully captures the subtleties of an undercover spy with limited movement - whereas Snafu is animated more loose in his drunken, staggering position.

Once the word reaches Hitler - the order is carried out to sink Snafu's liner. Composition and scope is used to its great advantage in the sequence of Snafu discovering the German submarines. The use of long shots of the submarines cornering the ship, or forming into a swastika creates excellent dynamics. 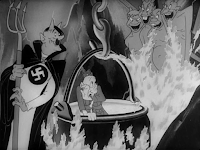 Alerted of the enemy, Snafu bellows: "Full speed ahead!" - but the ship whisks away with extreme force, to the point of Snafu falling into the middle of the ocean. Surrounded, the submarines fire torpedoes at Snafu.

This results in an elaborate layout of the ocean forming into a sinkhole; which is where Snafu falls. Johnny Burton's camera department apply a remarkably complex effect as the sinkhole vertically pans down to the fires of hell. Annoyed, Snafu wonders: "Now who in hell do you suppose it was that let my secret out." Then, the devil personified as Hitler appears, saying "What was that I heard you say my little sauerkraut?" The scene presents a good case of how the Snafu cartoons were beyond the control of the Production Code. Geisel takes liberties of this, like the use of "hell" as a pun; which compared to a Warner Bros. cartoon like Draftee Daffy, it could only be almost uttered.

Spies is represented as an excellent hyperbole and morale to the dangers of spying and eavesdroppers. Whilst it's all played up for comical effect with the spies' discreetness being improbable - the premise never fails to portray the consequences. The eavesdropping gags are used so inventively and believably to the point the viewer is persuaded by danger lurking at every corner. Geisel's writing on the short is sublime; from Snafu's antics right down to the memorable rhyming dialogue. The short makes it clear Snafu intends to be discreet on his secret, where his mistakes only make him human. 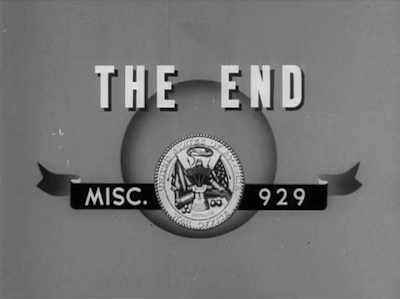