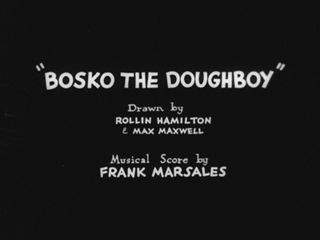 It's been a while since I last posted a review (about a week), and I'm back to posting more reviews for you all to watch. I've heard from others about Bosko the Doughboy recently and asked me what I thought about it. Wikipedia mentions that this cartoon is one of the best "Bosko" cartoons Looney Tunes cartoons in that Harman-Ising era. 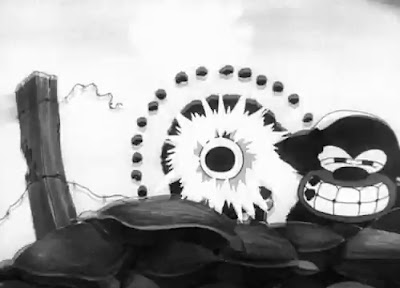 The cartoon starts off with machine guns firing and a lot of shooting is going on. The layout settings look like the cartoon is set in World War One (similar to Dumb Patrol). There is a shooter who appears to be the enemy that is shooting, and also shoots at the camera. There is a shot of a cannon shooting bombs one a time, and then a bomb flies from an off-screen cannon and explodes the cannon, and there is a gag on which the cannon quivers and twitches, until finally dying. That must have been some good acting  back in the early 1930's, even with weight.

There appears to be some type of ostrich that comes out of the parapet, and the bird has a bayonet and is about to attack, and then a bomb comes out of nowhere and explodes on the bird with a huge hole on his stomach, and he salutes before dying and landing onto a pond. There is even a band walking past the trenches playing music before getting exploded - gee, why would they be making a parade during a war going on? 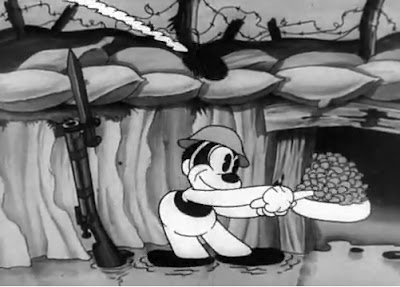 In the meantime, Bosko is under the parapet who seems to be enjoying his breakfast and eating some baked beans. He's enjoying his meal and he opens his mouth while eating, which appears to be a characteristic habit of Bosko. So, another bomb comes out of nowhere and appears to aim directly at Bosko's breakfast, and his food has vanished. All there is left for Bosko to eat was a tiny bit of cheese in a mousetrap, and I just wonder how he didn't snap his fingers by taking the bit of cheese on.

After Bosko's breakfast destroyed appears to be a tragic to him, he sits down under the parapet miserably, and then he pulls out a picture of his girlfriend Honey, and starts to kiss the picture. Another bomb comes out of nowhere and destroys Honey's picture and Bosko threatens revenge by shouting "I'll get you!" He starts to climb out of the foxhole with a bayonet, but a lot of bullets are fired at Bosko's helmet, and his helmet hits him back on the head and he falls off the ladder.

It's kind of strange for me to notice that a lot of gags appear to show bombs aiming directly at objects, and blowing up the objects and Bosko not being injured at all. 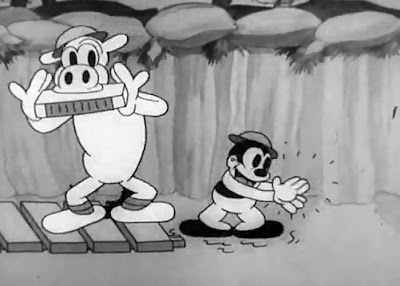 Bosko falls back down looking very dizzy, while there is another cadet member who chuckles, and pats Bosko firmly on the back and says "Cheer up, buddy", he seems to be a light-hearted character who doesn't seem to worry much about revenge and war. He gets out his harmonica, so he and Bosko start to dance into music played from the harmonica. They walk along the planks like a xylophone. 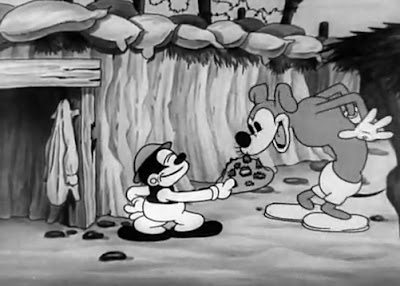 During the song that is playing, there appears to be another doughboy who is sleeping, and there is a flea who flies in and chews the doughboy in his pants. The cadet becomes very itchy and he starts scratching, also scratching outside by the wall. Bosko comes by with a wise idea to take the itching cadet's helmet off and hold it upwards (with bullets coming past shooting the helmet with holes drilled inside it), and the dog uses it as a back-scratcher, and lots of fleas inside fall out, thanks to Bosko. There are a lot of facial expressions for that itching dog. 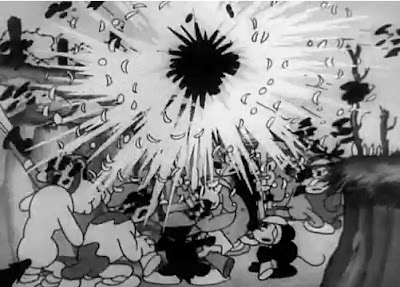 There is now a whole assembly line of cannons shooting out, and I have to say that the cannon shooting was wonderfully animated, and it reminds me of animation of World War Two cannons animated. A bird comes out of the trenches and steps up the ladder, so he plays his trumpet for announcement. So, all the troops run up with their bayonets to prepare for battle, and then the bird explodes from a passing by bomb. All the other troops march out and run to battle with their enemies. 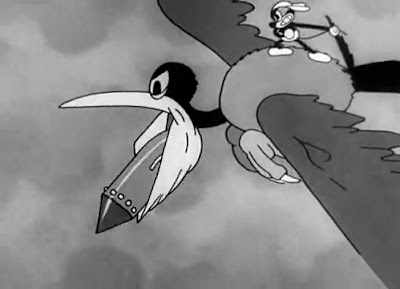 Bosko starts to walk out of the trenches and fight, and there is a good gag on which there is a war with animals: instead of war planes, they use pelicans to fly, with their beaks for bomb dropping. The pilot appears to be a mouse, and all the other big animals are having a battle over TINY MICE? Well, if that's the most craziest war ever, I don't know another bizarre one ;-).

As one of the bombs drop from the pelican, Bosko and the dog hide and scram - and the bomb explodes. The bomb explodes leaving the dog lying on a branch of a tree and Bosko's clothes tatty and ruined. So, as Bosko realizes that the dog is hanging onto a branch, Bosko grabs a bomb, and places it inside the dog's stomach and Bosko pulls his tail and the bomb shoots out of his body like a slingshot. The bomb hits the pelican and the mouse pilot, and then the pelican falls down in flames and it's MAYDAY.

Bosko and the dog laugh at the pelican falling down, but their timing with laughter ran out when a load of bullets are being fired directly at the dog's stomach, and parts of his body is being torn, and then there is nothing left in his stomach and he shrinks to a smaller size, and runs off hiding in a crater. 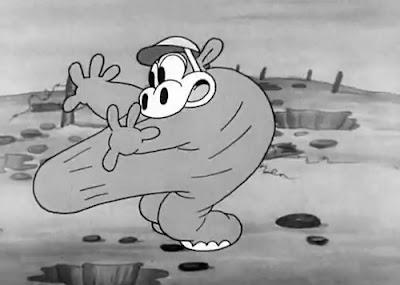 Bosko goes off with his bayonet and starts to fight his way through the passing by bullets, and he hides under a crater with a hippo cadet from the enemies shooting. The shooters firing at Bosko and the hippo are two baby birds firing with a machine gun in their birds nest. The hippo tries to be brave, and demands "I'll get him, buddy!", he runs out and tries to run through the bullets and he seems to be succeeding.
A cannon shoots out from a crater and a bomb lands into the hippo's entire body, and the bomb bounces at different parts of the body (I love the sound effects that go "boing" during the bomb bouncing), and then the hippo is dying and cries, "They got me Bosko, they got me", and then he falls down unconscious. 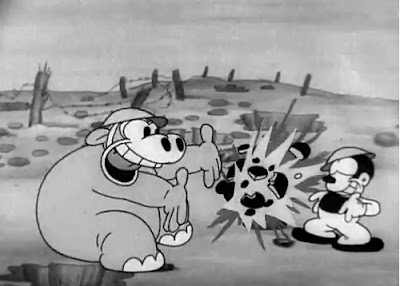 Bosko stands out of the crater, and remarks "I'll save you, pal", and then a whole load of bullets start shooting out. So, Bosko has to run through an army of bullets and dodging them. He uses his bayonet and he ties a piece of long underwear and runs out with it. A bomb manages to land in the long pair of underwear, and then the piece of underwear come to life and as the clothing walks to the cannon, the bomb falls out of it's hatch and then the cannon explodes. The war is mostly finished at the end of this cartoon, and Bosko runs up to the dying hippo and saves his life by unzipping his belly and placing the bomb out. Not aware that the bomb was near, Bosko and the hippo celebrate, and the bomb explodes in time, and Bosko was a "blackface" and cries "Mammy" and - that's all folks!

Now that this is the end of the cartoon, I have to admit that since this cartoon was considered one of the best Harman-Ising Warner cartoons, I have to say that that I don't really care about this cartoon much. It's sort of similar to Dumb Patrol but the story is different, except that the theme focuses on war. The gags were quite good, but it's not a cartoon that I care very much about, even watching it again.
Posted by Steven Hartley at 22:45