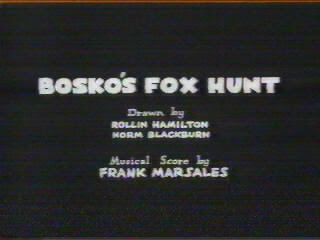 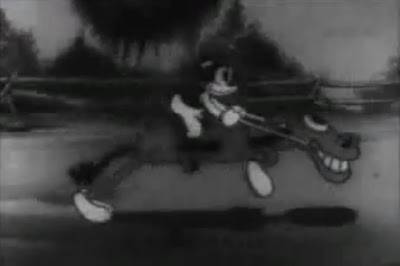 The short starts off with a group of dogs running through a field, and they are hunting for a fox, and it appears to be the chase is being leaded by an elephant. There is even a huge elephant who is riding a horse, and as the horse trots, the elephant almost squashes the horse while it trots, and then the horse's body grows back to normal size afterwards. I even wonder how the horse can hold such an elephant, most likely to have a strong back. After shots of seeing the dogs run, we see Bosko riding his horse whilst whistling. Looks like that Bosko is hunting to himself and not part of the gang. 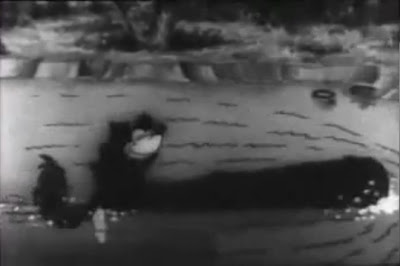 We see the fox who is running away (a naked version of Foxy, perhaps), and he doesn't seem to be frightened of the hunters, either because he's brave or he can outsmart all the hunters without getting killed. He crosses a lot of rivers and streams from the hunters. The fox jumps from rock to rock in the river, also jumps to logs, jumps off, and swims to land. The whole escape scene of the film was too long, for my tastes, but I guess the cartoon was too short it added time. 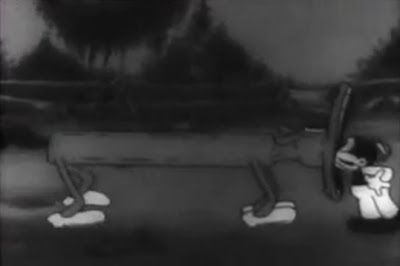 Bosko appears to be NOW riding a longer and scrawnier horse, who has a very wobbly body, and only able to jump through bushes, his body is very low to the ground, and so is Bosko. With the body very low to the ground, the body hits bumpy rocks, that also hits Bosko as he bounces and falls back on the horse. Bosko falls off the horse, and he sees a log just by him, and he places it inside the horse's body so it doesn't keep wobbling all the time. Gee, wouldn't that hurt Bosko's buttocks while he's riding - we'll see? So, Bosko continues to ride the horse, until the horse halts when he sees an edge of a cliff that goes across another bridge. The horse spits the ENTIRE log out of his mouth and Bosko continues to ride along looking for the fox. 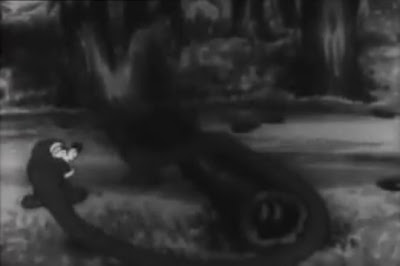 The fox continues to hide as if there is no danger coming whatsoever, so the elephant riding the horse, halts and uses his trunk as a trumpet to alert that he's located the fox. The fox is in distress, so he ends up hiding in a log, and just seconds of hiding, most of the hunting dogs run through the log without noticing. A dachshund comes by the log, and sniffs for any foxes about, he also kicks his rear end which almost covers the log. If you look very carefully inside the log, you'll see the eyes of the fox. The dachshund walks on not noticing anything, and the fox laughs, as he thinks he's too smart for them. 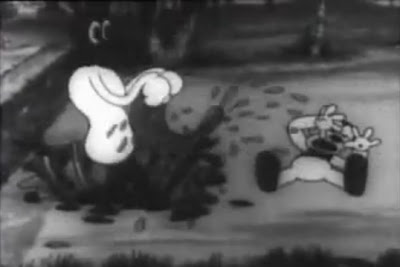 The fox notices Bosko coming by, and Bosko and his horse (who seems to have a better bodyshape now) is chasing after the fox - was there animation changes on the horses? The fox jumps over a bush, and notices a puddle of mud at the corner of the tracks. The fox pulls the mud onto an area where Bosko and the horse will jump and land - well, this is cartoon-land, and anything can happen. The horse jumps through the bush, and indeed lands into a pile of mud, with a SPLASH over the camera. The horse takes of one of his fur (like a jacket) and then twists it to get the mud stains off, and shakes the jacket, before going off camera probably to put it back on. Gee, it's been a while since I last saw a gag like that similar. 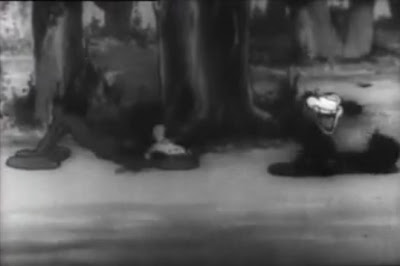 Suddenly, Bosko's dog Bruno (appears for the first time) out of nowhere (probably one of the dogs tracking the fox). Bruno comes up and licks Bosko on the face, but Bosko advices him to go and chase that fox, while Bosko will also try and shoot the fox with his shootgun.

There is now a chase sequence between Bruno and the fox, in which the fox chances directions to where he's running, mostly up and down. The fox also circles himself like a loop (also used in a chase sequence like Ain't Nature Grand). At one  point, Bruno has lost the fox (whilst hiding in the trees), Bruno starts to use his snout to track down the fox, at one point; he sniffs a tree root, but the tree grows legs and kicks Bruno in the face. The fox laughs at Bosko being kicked, so Bruno continues the chase after spotting the fox pop out again. 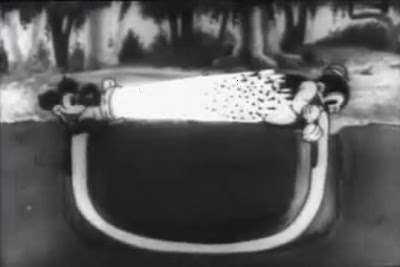 Bosko is running down chasing after the fox as well, with his shotgun. Bosko starts blasting out some bullets, but his shotgun goes all wonky that he starts mechanically turning and bumping himself at different directions. The fox hides in a foxhole so Bruno looks down to find it, but the fox comes out of a different and notices Bruno's bottom sticking out, and bites him in the bottom, which causes Bruno to scream, scramble and panic about.

Bosko spots the fox with his eyes, but the fox knows that Bosko has a shotgun, so the fox hides in his foxhole. Bosko knows that the fox is inside, and he sticks his shotgun down the foxhole. The fox notices that the gun is pointing at him, so he pulls the gun out into the other hole pointing at Bosko's rear, causing Bosko to fire and the bullets shooting him in the fanny. Bosko screams in agony, and cries "I'll get you!" 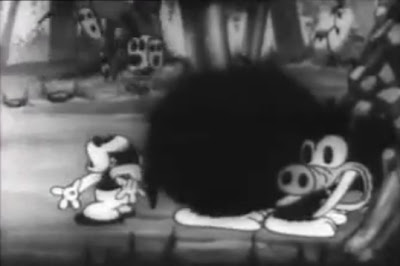 The fox hides in the cave (and that's the last we see of the fox), Bosko enters the cave himself looking for the fox. Bosko pulls a tail, thinking it's from the fox, but after pulling the entire creature out it turns out to be a huge warthog living in his cage, he goes ballistic about Bosko and Bruno and starts to chase after them. 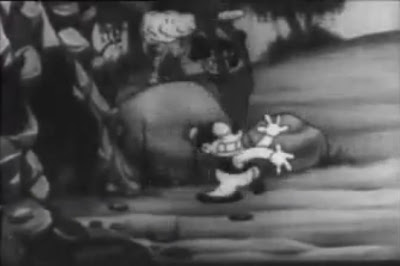 Bosko and Bruno hide in panic, as they make a hide inside another cave but the warthog follows them inside. For a few seconds, we hear a lot of violence from coming inside, and we can tell because there are special effects like dust and stars coming from the cave, and bashing. Bruno is knocked out of the cave, but he tries to step back in to fight back, but a hand comes out and punches Bruno out of the cave. We continue to hear violence, as Bruno steps behind a rock and hold a club. The violence has stopped, Bosko steps out of the cave and sorted out the fighting going in. Bruno, stupidly whacks Bosko in the head with a club thinking it's a warthog. Bruno licks Bosko in the fact, Bosko finds himself conscious again, then they both shake hands - and that's all folks!

I didn't really think too much of this cartoon, except I felt that the cartoon wasn't really about much about the first three minutes of it, until when the Bosko finally starts hunting the fox. It feels that the beginning felt slow because maybe Hugh Harman wanted to add more time, as it probably was an overall short cartoon while presented.

I find it very interesting that in years later, there would be two cartoons that would be similar: Porky's Duck Hunt and Porky's Hare Hunt, but those characters in there being "hunted" would later become very famous Looney Tunes characters - Bugs Bunny and Daffy Duck. Considering this cartoon was called Bosko's Fox Hunt we didn't see a "Fred Fox", or "Foxy the Fox" afterwards - probably because Harman-Ising didn't want new characters.
Posted by Steven Hartley at 21:29