As I've said, I'm going to be reviewing the first ever short in the Merrie Melodies series, as the past shorts was nothing but Looney Tunes, and that's how it originally started off at first. The name Merrie Melodies was an actual spoof name to a past series called Spooney Melodies (also produced by Schlesinger). The new series was used to promote new music for new pictures, and sort of "animated music videos" but with extra stuff inside it, Looney Tunes was now more of a series where it had adventures with Bosko. Merrie Melodies was made for that reason and with different multiple characters that were created.

The main plot in this whole short show a lot of drinking and folks in a bar all drunk, and singing. This cartoon was made three years before the Production Code of 1934, and that's why the cartoon focuses on a lot of alcohol. According to the documentary, Toonheads: The Lost Cartoons the cartoon was never reissued to theatres, and wasn't shown around the 1990's since it's theatrical release. 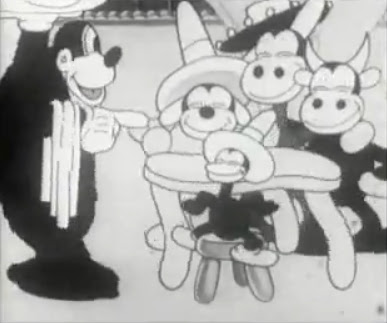 The cartoon starts off inside a Mexican saloon and everyone is singing into Lady, Play Your Mandolin and there are a group of drunks that are singing as well, and even the waiter who appears to be a type of ape, who sings in a low voice, "I'm a sinner, too". He also serves beer to a type of duck. While the song is still going on, the ape looks at the screen, and we see the ape right at the camera just laughing - blimey, wouldn't that frighten the audience. There is also a duck that is playing the flute and stepping on the piano keyboards making a tune.

So, the ape goes through a line of drunks who are drinking, and the ape appears to be dancing to some dance move, and there is also one shot of some hungry hippo who seems to be screaming at the top of his voice for no reason - probably asking for more. 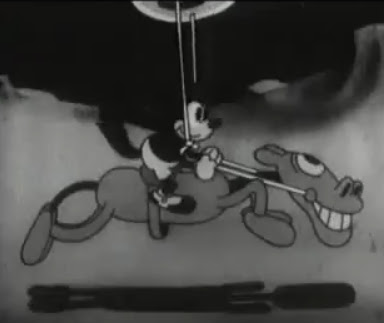 In the meantime, a new character from south of the border is heading his way and the character is Foxy, and it looks as if he's a gaucho. I supposed he was created as it's main character and somehow suddenly disappeared after the cartoon One More Time. Anyway, he appears to be in Mexico in the saloon with his sombreros and humming to the title song as well. Even the saloon building outside appears to be dancing to the music, which is sort of a spoof to the early Disney cartoons like The Gallopin' Gaucho. Foxy is sort of a similar design to Mickey Mouse, except the diffrerences are is the "fox ears" and the bushy tail.

Foxy also leaves his horse's neck tied up onto a bit of cactus, oh my - but wouldn't Foxy think of a better idea of leaving his horse and not have his neck jabbed onto a piece of cactus, because that's quite dangerous. 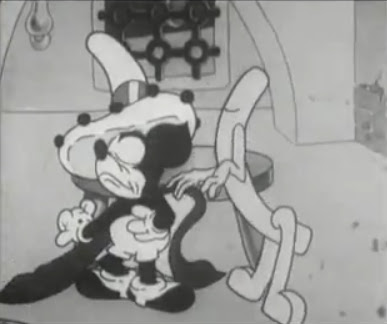 Meanwhile, Foxy is welcomed to a table, and there appears to be a hatstand that comes to life and offers Foxy to take his sombrero and instead of Foxy having to get his sombrero and jacket to the hatstand, the object and walks off with his items. So, the ape waiter comes up to Foxy and asks for what drink that he would order, and then gives him a glass of beer and then Foxy puts money on the table for the waiter.

The waiter extends his chops and then puts the coin inside as if it was a cash register. Foxy starts to drink the entire booze in one gulp and then he rests his feet up on the table as there is a show which is about to start, by a bird who uses his sombrero as a trumpet for an announcement. The bird uses so much energy, that the bird gets thinner and thinner in body shape (another Harman-Ising gag used in a seperate series). 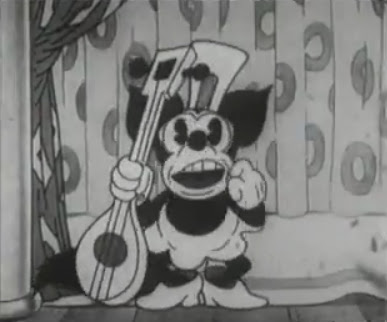 So, the curtains and there is a female fox who is performing tonight at the saloon (although the character is originally unnamed but in that show in the 90s called Tiny Toons - a show I've never watched; they had an appearance with that character and it was named Roxy), and the fox's name has always been referred to as Roxy, who is sort of a Warner Bros. take on Minnie Mouse. Foxy woos at Roxy, and shouts at the stage, "Oh lady, play your mandolin", and uses his hands to demonstrate Roxy playing a mandolin. Roxy says to the audience, "Oh baby, hear my song sin", and then she starts the song with "Lady play your mandolin - baby that that tune begin, when you sing that song of sin I'm a sinner too," and then Foxy repeats the verse "I'm a sinner, too", and then a fat hippo, and a mouse that lives in a tobacco spit bowl.

Foxy starts to singto Roxy back the lines to the song, and then starts to become a singing duet with Roxy in the song, and  whilst there is singing being heard outside, Foxy's horse (still attached on to a piece of cactus) razzies at the singing going on. 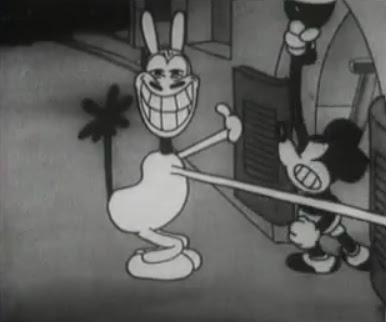 The horse then starts to untie itself from the cactus by pulling it's tail that brings his head back in it's usual body shape. The horse opens the saloon doors and starts to make irritating sounds inside (he's making trumpet sounds), and then Foxy walks by and hits him on the head with a beer bottle and knocks the horse wasted and drunk with alcohol, and uses his own body to play the trumpet. Foxy appears to be "singing the title song like Al Jolson". 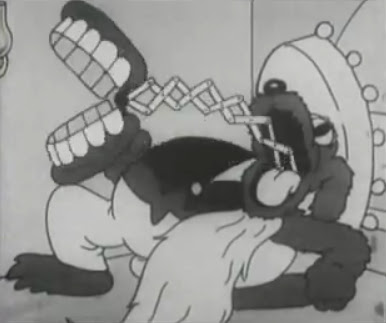 In the meantime, Foxy and Roxy continue their song and singing along to Lady, Play Your Mandolin. While the horse is playing the trumpet using himself to play it, there is an old, fat dog who is dancing, and there is gags there - like a mysterious mouse popping by and playing music on his sombrero. The next gag is his white beard that turns into a type of body shape and the beard dances, and then his teeth extend taller, and his "teeth chatters" to the rhythm. It seems to me that the drunk old dog has some problems in his body. 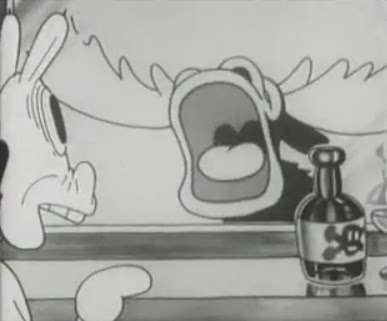 So, the horse enters the saloon this time and is all drunk and wasted, and starts to drink through the beer bottle, and even walking around the bar surrounded by drunks too (like what the ape did earlier), and then the horse looks inside the mirror, and instead of his mirror reflections, he starts getting hallucinations of scary monsters roaring at the mirror. 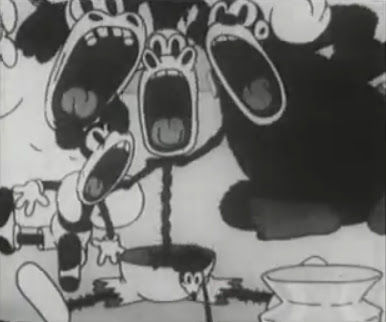 While the horse is walking down in a line with his booze bottle where the crowd cheer on him, and for some strange reason, the horse ends up in flames for no reason (either because he could spit fire), and then he starts to burn up, and then the flames extinguishes itself, and the horse is all burnt. So, the horse, a hippo, the ape waiter and Foxy all go around the horse and sing the final verse as part of the finale "Play your mandolin!, and then a mouse pops out from the horse's pants and puts a bin lid on top of a spit bowl, and that's all folks.
Well, that's the first Merrie Melodies cartoon reviewed, and its' kind of an interesting cartoon to watch, and it's important because of the standpoint of it's history as being "the very first Merrie Melody", but the cartoon itself isn't that great, and it's just basically singing and dancing (like a music video but animated), and that's probably why Merrie Melodies was created for that reason.
This was actually quite tough to review, especially that it was singing and dancing, and that it was the first Merrie Melodies, I started doing this review since this afternoon and didn't come back on it since tonight, and I'm now finished with it. Next up: Smile, Darn Ya, Smile!
Posted by Steven Hartley at 21:41