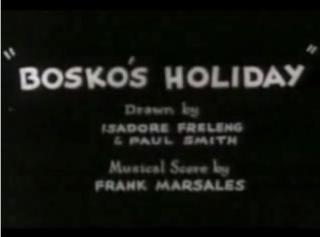 This is the first cartoon where the title card had Bosko's name in it, and since then all the remaining cartoons (asides The Tree's Knees) the rest of the Bosko cartoons would be named like (Bosko at the Zoo, Bosko's Soda Fountain, Battling Bosko, etc.) and this was also the turning point when the singing and dancing in Looney Tunes were no longer in the Bosko shorts when there was more story coming along. The "singing and dancing" shorts would come along in the sister show Merrie Melodies (which would have been expected to be first released on August 1931, a month after Bosko's Holiday). 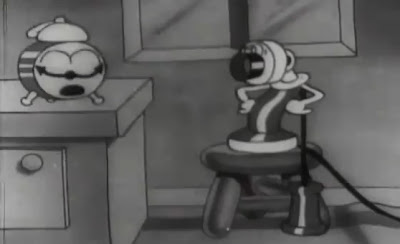 The short starts off with the telephone ringing loudly and even coming to life trying to get Bosko's attention to answer the phone, but the phone fails because Bosko is a very heavy sleeper, and it seems he has a holiday and is sleeping in late in his bed, or having a lazy day. While Bosko is fast asleep, the telephone sees his friend next to him - an alarm clock; also sleeping - so he hits the alarm clock to wake up Bosko early as he has a telephone call to answer. Notice how the clock snores with a "tick tock" sound - and that's how he snores, I like that gag idea.

The clock itself, tries to wake up Bosko by bringing a bell out of his head and shaking it hard with bell sounds to wake up Bosko, but Bosko is still sleeping heavily and can't hear a sound. The alarm clock also tries to wake Bosko up by holding onto a hairbrush and hitting his "bedpan". Much to the annoyance and frustration of the telephone and the clock, the clock uses one of his pointy clock hands to jab Bosko in the bottom and Bosko finally wakes by feeling something. 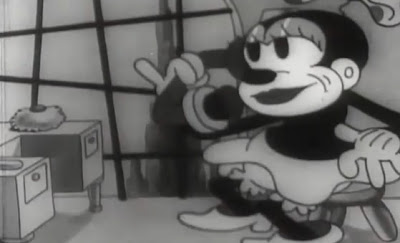 Bosko finally steps out of his bed after the jab, and he finally answers the phone - and the fact that he is very tired and can't really be bothered to answer the phone. But, he changes his mind when he realizes that it is Honey (his girlfriend) on the phone and asks Bosko that while they both have a day off, she suggests about having a day out together on a picnic. Bosko is happy about the idea, and then Honey asks him to make it quick on the journey and says goodbye, and then hangs up. As Bosko leaves to get ready and get changed, even the phone seems to ask him to get ready. Gee, could that be an early version of Voicemail ;-).

The dialogue between Bosko and Honey on the phone, the voices sound like children in recording booths that can't read their lines very well. Oh, just as I found out upon my research, Rochelle Hudson was only about 14/15 when she recorded her lines for Honey in this cartoon and obviously was a child. Johnny Murray, I have no idea when he was born and I don't know if he was an adult putting on a silhouette voice, or a child actor. If anyone has more information on Johnny Murray (the regular actor on Bosko, before being taken over by Carmen Maxwell), please make a note in my blog. 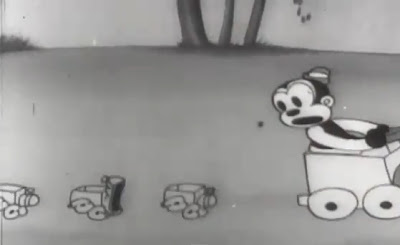 As soon as Bosko is ready and he jumps out the window, and he heads for his garage to go and fetch his car to head off to Honey's house. As soon as Bosko gets his car, and he gets the car ready (by using the same gag again - rolling the car like a cycle), and the car is sort of the same design from Sinkin' in the Bathtub. As soon as the car scenes, there are a bunch of tiny cars (children) and follow the car which would be their "mummy", and as Bosko notices them following them, he tells them to "go home", and they walk off scared of Bosko, and as Bosko sees them go he says, "Ain't that cute?" - those lines were reused from Ain't Nature Grand, and the concept of Bosko telling them to leave.

So, while Bosko is in the car, and it appears that the car is doing the driving while Bosko isn't doing anything. Bosko picks out his banjo, and plays some tunes in there, and while one of the strings loosened, and he replaces the strings by pulling out a mouse's tail which is an ornament in the car. The mouse comes to life, and is angered by Bosko's treatment of the mouse. As soon as Bosko arrives at Honey's house, the banjo strings comes off and then tries again to pull the mouse's tail off, but the mouse walks off in time and blows a raspberry to Bosko and walks off. 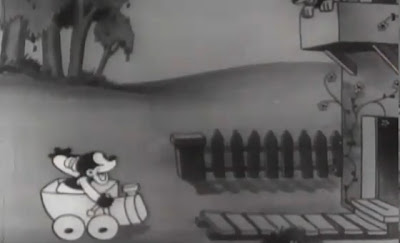 So, as Bosko arrives at Honey's front yard, and calls for Honey's attention as she arrives at her balcony and says "Hello, Bosko". It's kind of unsettling to see that the scene was actually reused from Sinkin' in the Bathtub, too. When they meet to get ready, Bosko extends his car to stretch and pick up Honey and they can begin their date by having a picnic. I always thought that frame grab (above) always somehow reminds me of the concept of Romeo & Juliett with Honey in the balcony, and Bosko on the grounds, you know what I mean. 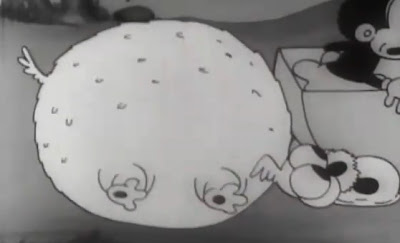 As Honey's dog is sniffing the exhaust pipe and even biting part of the wheel, the dog produces a lot of helium and is now a balloon-shaped dog. Gee, does that sound familiar from a gag like that in Hold Anything? Well, Bosko bursts the dog and is now shaped like a bursted balloon before going back to its normal shape. I guess that gag is useful enough and not reused. 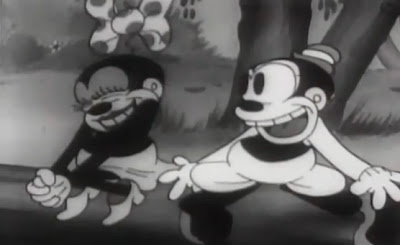 After that, Bosko and Honey step out of the automobile, and they cross a log through a river and sit on a broken log in the ground on where they are going to lay their picnic and enjoy the scenery. So, Bosko is enjoying his day out with Honey, and even rubbing her chin and trying to be romantic. He then whispers in her ear something (probably a dirty joke or something), and Honey doesn't like what Bosko said and ignores him in offence. 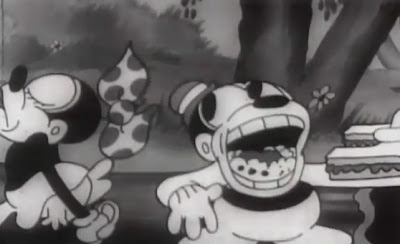 So, as Honey is cross with Bosko - and Bosko tries to stop Honey being mad and be more romantic with him again, so Bosko eats one of her sandwiches and complements on the way she makes food by saying, "Mmm - delicious!", I know this is a plan Bosko, but eat with your mouth closed! 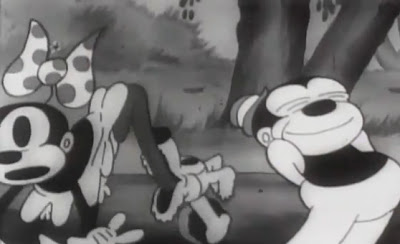 While Bosko's plan to flatter Honey is working, in the meantime: Honey's dog pops his head up and licks Honey's bum and Honey is suspicious that Bosko is trying to do something sexual towards Bosko (very disturbing), and then she slaps Bosko claiming he's the criminal, and she walks off disgusted, the cartoon ends with Bosko's annoyed comment "Aw, shucks" - and probably thought that his flatter to Honey didn't work - and that's all folks.

There is an interesting story that I want to bring up. About two years ago, I was on a different cruise and there was a British actress named Sue Holderness and she mentioned that dogs often "ruin the show". The dog licking Honey in the bottom is one of the reasons that ruined Bosko's moments, and that they can ruin the show. I think that this is what the cartoon is supposed to be about, and that dogs do tend to ruin the show.

What's I've noticed throughout this cartoon is that the gags were reused, true. But also parts of the animation was reused. It was slightly better than Yodeling Yokels, and the gags like the telephone and clock gags were original I suppose, but they were still part of the gags where objects come to life, that was used all the time in Harman-Ising cartoons. The most interesting part of that cartoon was the ending part, because like I said, "dogs do ruin the show" - well, cartoon dogs with a personality and character wouldn't always ruin the show, but pet ones do though, you know what I mean.
Posted by Steven Hartley at 22:36