Yesterday in one of my requests that if anyone knew more about the main stars in the Bosko series of Looney Tunes like Johnny Murray who played Bosko, and Honey played by Rochelle Hudson. Yowp has been very helpful by sharing his source in a newspaper article back in the 1930's, on Facebook, about Rochelle Hudson when she was roughly 14 (the newspaper article says she was 17). I do feel the need to share this: 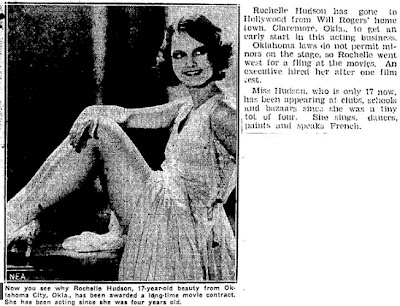 Article property of Yowp.
This newspaper article explains about Rochelle Hudson who seems to be pursuing a movie career (probably on Warner cartoons) when she used to live in Oklahoma City, Oklahoma. It explains that she's been acting since she was four years old, and has acted in "schools, clubs, etc.", it seems that now she's pursuing a movie career, and yet this article doesn't say anything about her involvement in voice acting Honey.
Yowp confirms that this newspaper article was written in 1930 and Hudson was 17 at the time, and yet the death records lists her birth as 1916, and if she is 17 in that article, she would've been born in 1913. Although, I suppose that Yowp made a point that she most likely lied about her age to go into the film business as she was "legally too young to do stage work in Oklahoma". So, in that case she most likely made up her age.
Meanwhile, it's great to hear a bit more on Johnny Murray that he was Richard Barthelmess' singing partner, and died in August 1956, at the aged of 52 of leukemia. I checked on Social Security Index, and it confirms the death year and month, and also confirms his birth date around June 1904, so it means that he was putting on a falsetto voice of Bosko.

I just felt I ought to share this, and I hope it's ok if I'm allowed to do this.
Posted by Steven Hartley at 23:23