This is the first Warner Bros. cartoons that have been part of a category called the Censored Eleven, because the cartoon stereotyped a character there named Uncle Tom, we'll find out more on this review. Also, the last appearance of Piggy and Fluffy. 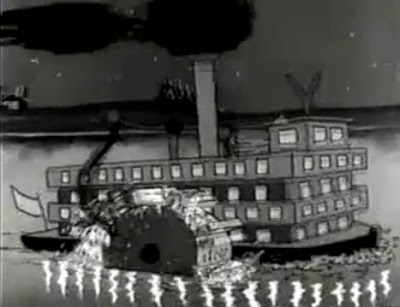 The short starts out with a riverboat saying through a river, and it appears to be similar to the riverboat that you see in Steamboat Willie, with the funnels blowing from one funnel to the other. The riverboat goes down some slopy waterfalls, in which the boat makes a shape while sailing down. There are also passengers on deck singing the title song, Hittin' the Trail for Hallelujah Land.  With the main guy playing the banjo, and another with chopsticks, and another with some type of harmonica. There are also huge whistles onto the riverboat, and even a hut that's attached or tuged onto the riverboat that does a small whistle. 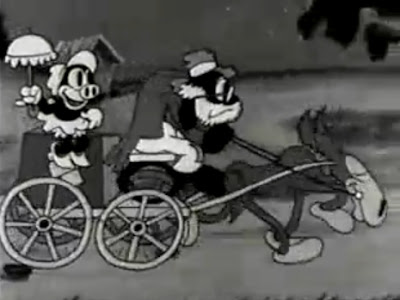 Meanwhile there is ol'Uncle Tom who is on a carriage riding a mule, and it appears to he his niece Fluffy is riding with him, comparing with the outfit she's wearing - this cartoon must have been set in the 19th century in the South part of America. They appear to be singing a bit of music I can't understand (Update: Yowp points out that the song they are singing is Camptown Races which was a famous song that used to be a sung a lot in the South part of the United States, and also popular to blacks back in the 19th century), and it seems that Uncle Tom keeps bumping on his seat, and his mule that whinnies. Fluffy would scream when she sees the riverboat, "Oh there's the boat, Uncle Tom", and he would whip the donkey that makes the donkey sounds. 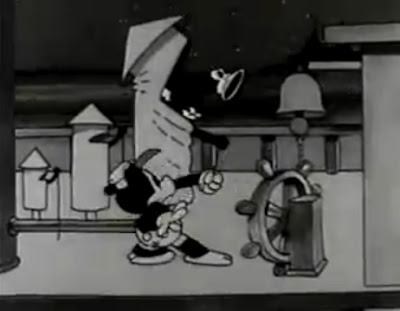 In the meantime, here is Piggy, who is steering the ship - and the scene where he's steering the wheel is just like another shot of Mickey Mouse steering from Steamboat Willie. Gee, Rudolf Ising sure liked to reuse old Disney cartoons made around their time back then. Piggy pulls the ship's whistles, and the biggest one has a crow that sticks out and makes a "coo-coo" sound from the whistle.

The ship finally docks to the harbor, and there are passengers waiting to board the ship that are cheering, Fluffy is one of them that boards the ship to get ready, and as she gets on, she says "Goodbye," to Uncle Tom. In the meantime, as the ship sails - there is a band that plays on the deck - again. 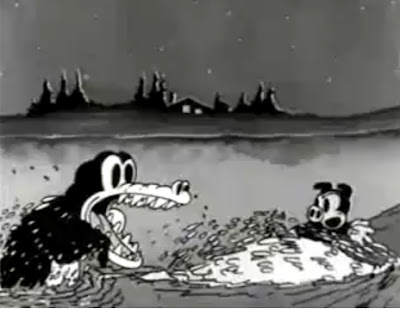 It appears to be that Piggy and Fluffy are dancing on the aft side of the ship, then Piggy accidentally falls off the ship, and he hurts himself from the paddle wheel, and he lands onto the water, and climbs onto what appears to be a "rock" from Piggy's mind. Nope, the rock turns out to be an aligator from the river, who swims after Piggy, and now Piggy is in trouble. He swims onto a log, and he uses his tail like a propeller to speed away from the aligator and back onto the riverboat.

The gag where Piggy spots what looks like a rock is similar to the one in Bosko Shipwrecked. 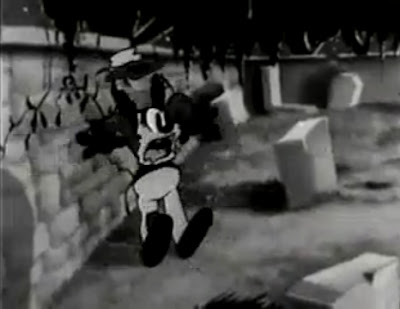 Meanwhile, Uncle Tom is sleeping on his carriage while riding on the mule, he keeps getting whipped on the face from the donkey's tail, so he puts a rock and ties it on his tale, so he doesn't get whipped. Apparently, the tail is so wrong, that the rock smashes Uncle Tom off the carriage and into a cemetery. Uncle Tom looks at the horrors inside and shouts "Holy mackerel!" Uncle Tom walks along the graveyard, and a tombstone opens with bats swarming out. 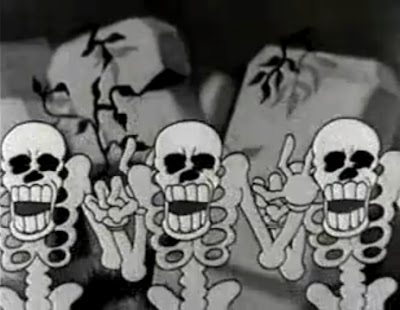 The skeletons start to appear, and haunt the daylights out of Uncle Tom. The skeletons are singing off Hittin' the Trail for Hallelujah Land and there is also a skeleton dog that comes out of the tombstone that barks. Uncle Tom then starts to panic and tries to run out of the cemetery, and there are skeletons chasing after him, and scaring him at different places of the graveyard. I must say that the whole skeleton sequence is very similar to The Skeleton Dance another Disney production made in 1929. 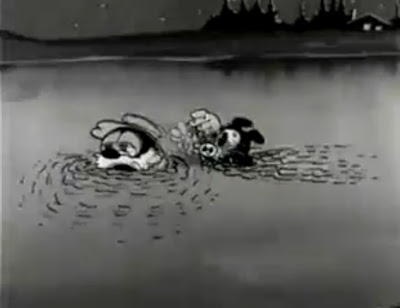 Uncle Tom jumps out of the cemetery through the broken pieces of the walls, and he finds a canoe and he jumps into the river with the rowboat, swims for his life and then drowns. Piggy sees that Uncle Tom is in trouble, and even he stands up and bravely announces, "I'll save Uncle Tom", and he's about to dive into the water, and his pants fall out in air, so he dives back, puts his pants back on and then he dives back. He manages to grab Uncle Tom who is drowning. What's interesting is that in the novel Uncle Tom's Cabin, it was said that Uncle Tom sold "down the river", and probably meant he drowned, and I assumed that it was used for this cartoon. 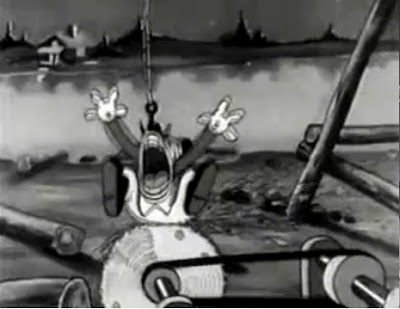 As Fluffy watches Piggy save Uncle Tom from the river, there is some type of villain with a curly moustache who takes Fluffy away from Piggy. Piggy rescues Uncle Tom from the river, and hears Fluffy's screams from the riverboat shouting for help. Piggy runs along to a "cargo hook" and he helps rescue Fluffy by attaching the villain's jacket onto the hook, and Fluffy steps off and joins Piggy on top of the hook. Fluffy looses the hook and the villain is being jabbed in the bottom by a buzzing saw, Piggy and Fluffy laugh at what is happening - and that's all folks!

That's the end of my review in this cartoon, when I saw this cartoon (already knowing it was part of the Censored 11) I didn't think the cartoon was VERY racist at all, but I guess the reason why it was in that group because it's stereotyping Uncle Tom who is a black stereotypes, and Uncle Tom was a character created by Harriet Beecher Stowe. I also thought the design for Uncle Tom didn't look very noticeable as a black person when I saw it, I thought it looked like another "ink" person, but with the mention of "Uncle Tom", it did give it away.

This was quite a crazy cartoon, and also quite an adventure, with the skeletons, and villains. They reused a lot of footage from Disney cartoons like in Steamboat Willie or The Skeleton Dance, which was largely noticeable
Posted by Steven Hartley at 23:05