The last of the Foxy cartoons - we haven't seen him very much, haven't we? 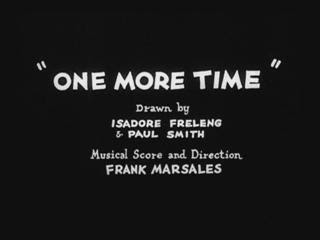 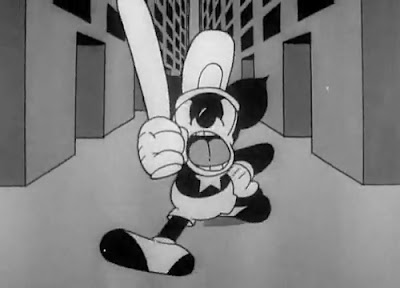 The cartoon starts off with Foxy and he appears to be a police officer and is in service on looking after the city streets and he's swinging his baton at the tip of his finger. As things were going well, there are fast cars that are zooming in fast and Foxy brings out his baton as a warning for anyone going over the speed limit, "One more time, just one more time!" Foxy shouts back at the cars, "One more time", again and then a mug from a bin pops up and shoots Bosko's hat into tiny pieces, Foxy gets him back by getting out his gun, in which it extends with a little mouse attached and hits him with a mallet on his head, until he passes out and Foxy closes the bin doors and it sounds like he replies, "No more crime big bully, no more crime."

It seems that the gag with a mouse hitting him on the head with a mallet is a type of gag aimed for younger audiences so it's not as violence as seeing bullets shooting out, or other gun shooting violence going on. 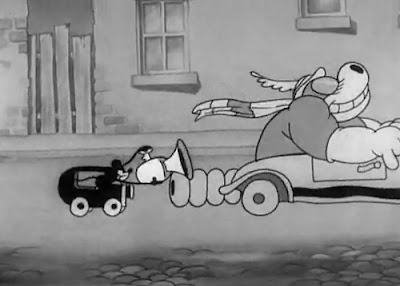 Meanwhile on the road, there is a a hippo on the road and it appears to be the same hippo from the previous Foxy cartoon Smile, Darn Ya, Smile! There is a small mouse who complains that the large hippo is in the way and honks the car at her, because the mouse wants to pass by. The hippo ignores what the mouse says, and won't let the small car past through. The fat hippo complains of the mouse driving in front, and the mouse laughs and razes at her. The hippo is furious and then goes at full speed ahead and drives through the mouse's car. 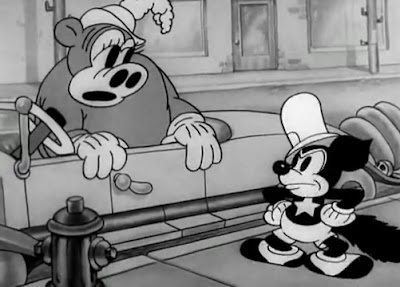 The hippo in her fast car almost runs over Foxy, and then Foxy starts to blow his whistle and blows so hard that his pants all down, and then he pulls them back up and runs to the car, to try and stop her. Foxy warns her that she is fined by saying "One More Fine", and then he writes a ticket of charge, and then the pencil point breaks while writing and sharpens his pencil by using the "hood-ornament" mouse in front of the car. The hippo starts to beg for Foxy not to fine him, and starts bawling and Foxy has had enough of the crying and then puts a bin on top of her head and walks out of the scene. Gee, is this what a cop is supposed to do? 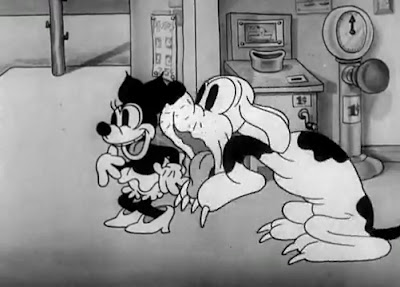 Bosko continues to walk down the streets and swinging his baton, and then his baton falls out and hits him in the head; he steps up and does a John Sullivan pose, and he was watched by his girlfriend, Roxy and his unnamed dog. Foxy stops preparing to fight and then meets Roxy and her dog, and then her dog comes up to him and gives him big juicy licks on the face. Roxy giggles and says "Ain't that cute?", and now that's gone to Merrie Melodies when it was a usual Bosko catch prase.

I have to say that the voice of Roxy just sounds a lot like an early Minnie Mouse, was it Marcellite Garner; the original voice of Minnie who provided the voice for Roxy maybe, or was it Rochelle Hudson used again, or a different actress? I don't who voiced Foxy, does anyone know? 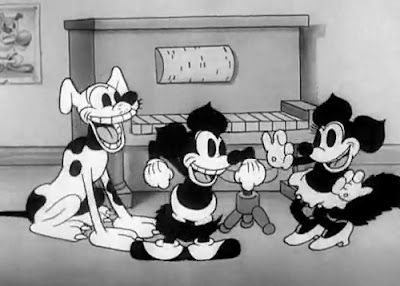 Roxy starts to play the piano and play the keyboards. Roxy's dog is still licking Foxy and then Foxy has enough and then he pulls his dog's tongue and ties it around his mouth so he wouldn't be licking anymore. Foxy uses Roxy's dogs teeth for the piano sheets which is clever, I guess. As for the song, I don't know the title for it. 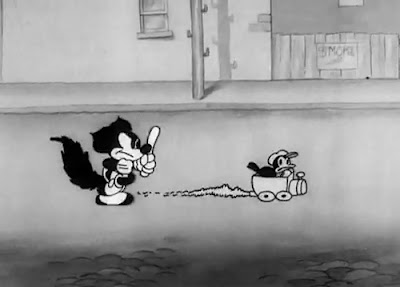 Meanwhile, there is a bird in a small car with a gun and appears to be shooting at a hippo entrepreneur, and then the hippo ends up facing a wall with nowhere to go. So, the criminal steals his golden watch from his waistcoat and then the hippo starts bawling. The police hear the scene and make their way to watch the criminal and then use an ornament cat as their siren.

Foxy is also chasing after the criminal bird and as the small bar goes under a log, and then the car gets bigger with bigger criminals at the back of the car, and then the car turns and chases after Foxy. Even the car exhaust pipes go off and Foxy is covered in black dust all over with only his eyes visible. One of the thugs spit on Foxy and then he tumbles backwards. Another thug gets out a hand grenade and throws it at the police van and explodes, causing the police to fall into some mud in the middle of the road. 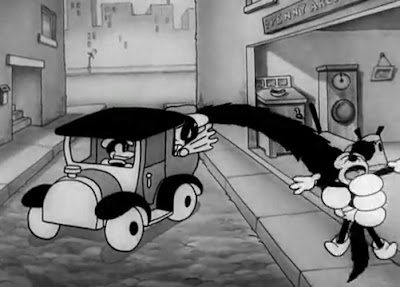 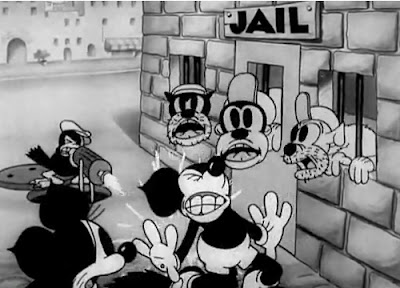 So, Foxy and Roxy ride on the mechanical horse and they go inside a prison cell where the van follows them. As soon as the van follows Foxy and Roxy, Foxy comes out of a manhole and closes the gate quickly and the criminals are locked up. Foxy and Roxy celebrate and the mugs in prison say the last verse of the song, "No more time!", and then the criminal bird comes out of the manhole with a machine gun and shoots at Foxy's bottom and he screams in pain and then - that's all folks!

Well, that was a rather good ending to end Foxy's short career in cartoons - being shot in the buttocks, don't mean to sound like Forrest Gump. I guess that Rudolf Ising didn't know Foxy's fate and maybe the audiences didn't like him in the theatres and his reign on Merrie Melodies was cut too short, and then that was his last cartoon, or maybe Rudolf just wanted to add new characters into every Merrie Melodies short.
Posted by Steven Hartley at 22:13