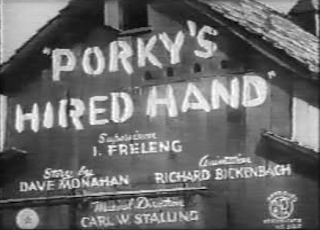 This time it's Freleng's shot to direct a Porky Pig cartoon, other than than being typically Bob Clampett. Like Clampett, Freleng also uses Porky very rarely in the cartoon, only making an appearance from the beginning and at the end briefly.

The main star of the cartoon, however, is a dim-witted pig named Gregory; and a streetwise fox, who breaks into the henhouse to steal some chickens. Dim-witted characters were already becoming more popular and frequent as the humour Warner cartoons started to become more evident.

Considering that Clampett or Tex are main examples on dim-witted characters of their creation, Friz Freleng and Chuck himself were also as capable as these two. Friz's interpretation of Gregory the dimwitted pig is pulled off rather well. Notice the particular voice put on my Mel Blanc for Gregory? It appears to be the standard dim-witted voice which Friz Freleng preferred when using dim-witted characters. You can hear examples of that in his cartoons in: Foney Fables, High Diving Hare, etc. Just as Porky has hired Gregory for the job, he attempts to ask him on what his assignment is, in which he responds dimly: "You said, uh, keep your eyes open and watch out for that fox. He's been getting too many of my chickens lately, he's a sly devel he is, and uh, and uh--".

Note the reference in the opening sequence of Porky reading the application layer. At the bottom of the 'P.S.' the line reads: Alright, so he ain't neat! Reference, anyone?

Despite Porky's lack of screen appearance. This is one of the many cartoons where Porky's occupation is a farmer. Too many numerous cartoons which base on that theme, that is is possibly the most popular associated occupation for Porky of all the cartoons he's been in.

As spoken, Porky doesn't really get very many opportunities in this cartoon, as the real stars of the cartoon is a quick-witted fox, and a slow-witted fox: an opposite attract pair.

The cartoon, as a whole, feels more or less like a Merrie Melodies entry; except that the short is in black-and-white; and that Porky at least has some screen time, which makes it into a Looney Tunes product. It's evident from almost up to this point that Leon Schlesinger was becoming a lot less strict with the policies between both cartoons; that even by 1941: one-shot cartoons were appearing in the Looney Tunes series; and by 1944: both series had lost their comparisons and differences.

Dave Monahan, and Freleng's interpretation of the fox has been cleverly constructed and satirised. Of course, foxes have a strong reputation for being very cunning and sly; and that's how we see the fox from his introduction in the cartoon. However, towards the end of the short--he had been accidentally outsmarted by the dim-witted Gregory, and even swallowing the key whilst inside the Incubator Room.  Considering that the fox wasn't "smart as a fox" from swallowing the room key...he then finds himself trapped inside the incubator where he then starts to go into a panic attack: "No. It can't be".

He then searches around his body, to search for the key...realising he has self-digested it. If that were a Clampett joke, you'd expect a little bit of bathroom humour, in a subtle way. Instead, Friz doesn't go down that path and then gets the fox to go into a over-dramatic phase: "Trapped! I gotta get outta here! I'll fry!" and then the fox proceeds to bang on the door. The whole setup was very amusingly built to this climax, as the writers managed to write up about Gregory managing to outsmart the fox by accident. It is a very looney concept where it implies the smart even fail at times.

The sequence where the fox corresponds with Gregory shows some great manipulation from the personality of the fox (even though he would later be out-smarted); where Gregory can easily be enticed into a hoax.

When the fox breaks into the henhouse stealing the chickens into a large sack; he is then caught by Gregory who is guarding the door and orders him to return the chickens back to where they were positioned.

Realising the character is a dimwit; he then walks away placing the chickens back into the back and even suggesting that both of them could be potential business partners.

Enticed by the whole idea, Gregory then calls over the fox where they discuss the possible idea, "Wait a minute, Mr. Fox, I didn't say I wasn't interested, but what about Porky?". The fox even suggests the name for their new "partnership": Fox & Gregory. Without knowing, Gregory then places the whole poultry into the sack where the fox then walks to where it should be the exit room, but instead walks into the incubator room. Notice how the sequence is constructed rather uniquely; there are several short scenes in that sequence which fade to black and then fade in during dialogue scenes. It's an unusual piece of pacing which is promising and intriguing and even paces the sequence very evenly.

Of course, let's not forget to mention some of comic timing which was timed by the one and only Friz Freleng, in this cartoon.

Even though this may not be one of Friz's most notable shorts in terms of timing; there is no doubt elements will appear in the short. A great sequence occurs when the fox has broken inside the henhouse and starts to steal some of the chickens. The chicken then begins to start sleepwalking; with his arm raised and his legs taking big steps--am I the only person who misinterprets this as the goose walk? Of course, this wouldn't have been intentional.

The fox then dashes at the scene with the chicken landing in the sack; which shows Friz's genius of timing is evident. Also, Freleng takes advantage of Treg Brown's timing on the sound effect. It all blends in nicely in one sequence. Gregory is snoring in the farm, and as they snore: the chickens snore one-by-one separately and Gregory snores at the last note. You've got to love Friz's creative timing, as well as the ludicrous albeit charming gag by Monahan.

Then going down to the cartoon's climatical ending; Gregory then attempts to break down the door to the Incubator door; and just then; Porky arrives at the scene with a shotgun, after hearing the noise of the commotion. As he manages to open up the door with a spare key to the door: he then asks for anybody in there. Typically, you would expect the cartoon to probably end with a typical catchphrase from a radio show or a celebrity; but at least it ends rather cleverly when the fox has been affected from the incubator that he has shrunk, and then begins to berate at Porky with his "now" size and high-pitched voice. "You'll hear from my lawyer about this!"...a great line to end a particularly amusing cartoon.

Overall, as mentioned earlier, the cartoons in the Looney Tunes series were slowly beginning to take liberties once the strict policies (i.e. Porky Pig appearing in every Looney Tune) started to mellow. It would not be shortly after until the series would be converted to colour. Porky cartoons would begin to appear less frequently to make way for other big shots like Bugs Bunny and Daffy Duck. In 1940, Porky Pig was established with an everyman persona, which was established since his creation. It wasn't until a few years later when his character was revitalised to become more accustomed to broader characters like Bugs and Daffy. The short itself shows some great personality from the characters like the Fox as well as Gregory; despite the lack of Porky's appearance. The short itself is paced and executed thoroughly, indicating that the cartoons were building more promise and potential into cranking out hilarious cartoons, thanks to Friz Freleng--who has so far been the only director of the year turning out really funny cartoons, a tad more so than Tex Avery. 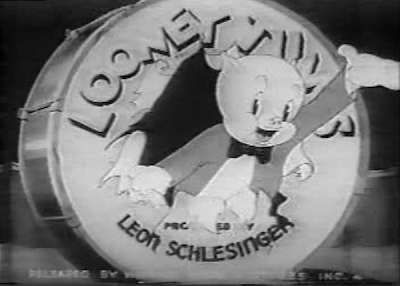