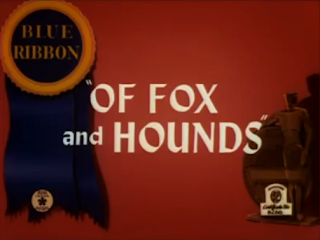 
Before the review can begin, as it appears to be (judging by the copyright catalog) the original titles for the cartoon had a sort of gag to it; where the artists responsible for whichever were credited as digits. A very typical interpretation by Tex, but at the same time a little pointless as enthusiasts don't get to know who the story was credited to, and the animator...but at the same time? Does it even matter? Tex's unit already consisted of Bob McKimson, Rod Scribner, Virgil Ross, Sid Sutherland and Charles McKimson; whereas the story credit was rotated, and at the time: worked in groups. However, it's most likely possible credits or possible writers for the short could have been Dave Monahan or Jack Miller, who were regular writers for Tex in this time period.

The original title card does exist (though it is seen as a small size) through a group of original titles owned by Tim Cohea (Sogturtle); though it would be great to see it blown up into a clearer and bigger size. 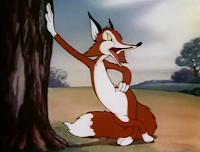 Had Tex completely abandoned the Bugs Bunny idea after A Wild Hare and interpreted it as a one-shot cartoon? Of course not, where did I get such nonsense! Obviously, Tex would direct a few more Bugs Bunny cartoons; until he left the Studio...but did Tex experiment the personality formula with other characters? Well, here is the cartoon which is being reviewed. 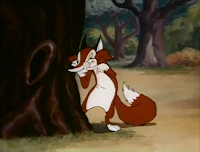 It was no doubt that A Wild Hare was (and is) a revolutionary cartoon for the whole Schlesinger Studio; but before Bugs would make more appearances--Bugs would use the quick-witted persona for other characters. Here, we see the fox...named George; who is merely Bugs Bunny in a fox suit.

He can manipulate his potential enemies, for example..the bloodhound, Willoughby. He can easily outsmart his opponents, including a slow-witted, stupid hound; as well as a fierce, grizzly bear. Compared to A Wild Hare this cartoon lacks as much creativity and the gags appear to fall a bit flat in this cartoon. It has quite a tepid construction to the story; where it really focuses on Willoughby being out-witted by the sly fox, and falling off the climax. Nothing too original, or as well as exciting. 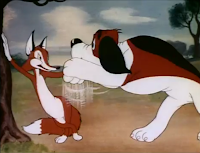 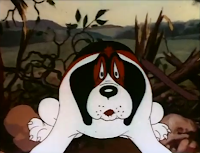 For what it is worth, the cartoon is a "first" for its reasons. For one, it is the first Warner short (or quite possibly Hollywood short) which is a satire of the very popular Steinbeck book: Of Mice and Men which was published in 1937. The parody between the two characters work so well, and the relationship is very rich and successful that this would revolutionise to more future cartoons using that similar formula (or satirising elements of it). 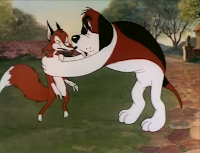 Also, this is the first cartoon which marks the first appearance of the short-lived character by Tex: Willoughby..who he had used in two other Warner cartoons: The Crackpot Quail and The Heckling Hare. With the 'Of Mice and Men' persona being more revolutionary in the cartoon, the contrast between Lennie and George. It's not so much on the book; but of Lou Cheney Jr's performance on Lennie from the 1939 Hal Roach film of the same name. 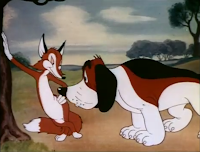 It becomes a very rich and believable concept from Tex. The fox being very cunning and sly, as they are known for, and whereas Willoughby just has the look and expressions of a dimwit.

It has an excellent satire that you are convinced you see George and Lennie inside of them, it can see through some excellent character animation by Virgil Ross when the Fox and Willoughby first encounter one another. This just about explains as to why the Of Mice and Men satire is revolutionary for the cartoon; as it would help upgrade the humour in the Warner cartoons by producing more clever burlesque, rather than just over-used, unfunny one-liners from obscure radio shows. 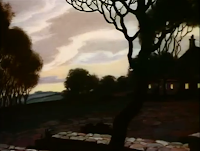 Johnny Johnsen's background paintings also punch up a notch in terms of detail and beauty. We've all seen his for for Tex's cartoons at MGM and Disney, who produces beautiful colours and designs for his shorts...but the panorama opening shows how rich it looks. Whilst Stalling plays William Tell during the opening shot where it is shown as early morning.

The colours of the sky show so much realism and truth to it. A background no nice, that Tex has used it twice: the latter for the MGM short Out-Foxed. Friz himself had also borrowed it for Foxy by Proxy--interesting how Tex still had access to re-use Johnsen's backgrounds when he was over at MGM; and yet Freleng could at Warners.

Note that even the backgrounds show a particular style throughout the film. Note the illustrated cover of the first edition of Of Mice and Men (by Ross MacDonald) actually shows some subtle inspiration in the backgrounds by Johnsen. Although it may not be very evident, but Johnsen's use of colour and the wavy trees give quite a strong connection to the illustrated cover--which could mean Johnsen was inspired by the cover.

On the animation side; Tex Avery is still developing on some characteristic cycles which he is well known for. Look at the run cycle for Willoughby when he running in the forest (supposedly chasing after the fox).

This is a great one which was hilariously animated (probably Bob McKimson) which shows how Tex could even be very wacky and exaggerated in some areas, even if he hadn't quite got into that faze. The cycle is used at least four times in the cartoon itself; which is used as a climax which then results into failure: three times he just falls off at the edge of the cliff, and the first he crashes into a tree "I'm gonna go catch the fox--'cos I know every tree in this forest!" and then he slams at the tree. Perfect timing. What's great about the run cycle is that it nails the dimwitted personality and low intelligence of Willoughby. It implies that Willoughby is that ignorant he cannot run properly. 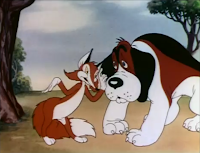 Despite the cartoon being a little revolutionary in terms of the humour, the animation as well as animation timing--the story of the cartoon, however isn't so much of spectacular as those three which I covered. 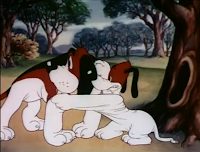 The cartoon is really split into acts where the fox outsmarts the dog; and there is really no twists or connections which follow in the cartoon. 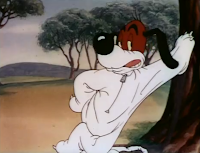 The first sequence shows Willoughby, dumbfounded of the fact he is speaking to a fox, and asks for the whereabouts. This means the fox responds: 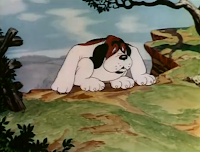 "Well, I tell ya what you do. You go down to that ol' tree stump, and turn right until you come to a ray of fence. You'll find him right on the other side. You can't miss him". Then, Willoughby runs in his characteristic cycle until he falls, and realises: "Y'know...THAT was the fox!". The next sequence, however, is just a repeat from the previous sequence, except the fox is in disguise of a hound costume.

He repeats the exact same instructions, and then Willoughby crashes again. Tex deliberately makes the sequence a pointless repeat, even by the own words of the fox: "My name's George. Here we go again". The animation, most probably done by Rod Scribner, shows some great character animation as well as weight of the costume, whereas the previous sequence showed great communication animation (by Virgil). Whilst the acting by Blanc and Tex (voicing Willoguhby) is top-notch; the sequence really lacks any depth (and humour) as well as a climax for what is to come, a little irrational. 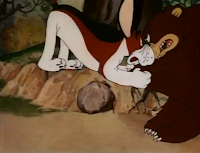 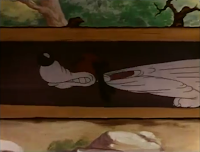 Then, the pace doesn't pick up until Willoughby follows the fox in disguise; but discovers however that whilst he is under the log; the costume stretches (as it is jammed from the log) and it rips open. So, George the fox then begins to run away from Willoughby, who realises it is the fox: "You know, George was spoofin' us. He was no fox all the time." Then this leads to a brief chase sequence; until the climax finally comes---Willoughby intimidated by an intimidated bear which he mistakens as a friend for trapping George the fox. 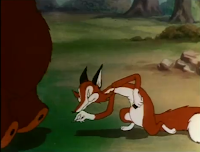 Tex's own use of suspense in the shots then becomes evident when Willoughby is hiding on top of a tree, frightened of a provoked, fierce bear. 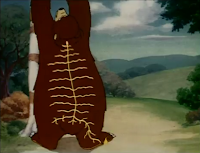 George, witnessing the intense moment, then attempts to save Willoughby by using his craftiness--the ol' hotfoot. He strikes a match and places it under the bear's foot. The pacing of the shots where the match almost strikes his foot is very effective, as well as Stalling who gives the suspense through music. As though Tex was hardly wacky in this time period, a wonderfully comically timed sequence occurs when the bear is struck by the foot; in which it reflects all the way to the bear's spine, and he dashes off. For the time period it was made in, it shows some great use of speed and delivery. 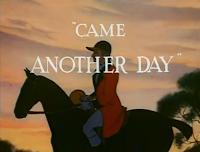 Then as the cartoon draws to a close; we find that Tex recycles and repeats animated sequences and bits of action and dialogue all to combine to the concluding gag of the gag. We find the realistic looking trumpeter on his horse; blowing to A-Hunting We Will Go, and all the other hounds follow. 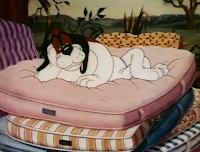 Just then, Willoughby (who has kept George in his kennel) then asks him to help find a fox in which George, responds the exact same words which he used twice previously; in which Willoughby responds: "Well, gee, thanks a lot, George! Thanks a lot!" kissing George.

Then, this results in the crazy characteristic run cycle, Stalling's music cue for the run and he falls off the cliff. This time, hardly a sound---just a little 'ping'. The camera pans down vertically, in which Willoughby (already planned) had landed softly on a bunch of mattresses and cushions, remarking: "Ya know, I ain't so dumb!". A few flaws in the sequence, Willoughby's ignorance and consistent response to George's overused prank just gets carried away; and having a whole sequence full of repeated elements all runs down together. Except, that the concluding gag at least had a continuous bit of logic towards it...and at least a smart move for Willoughby.

Despite the cartoon being revolutionary in terms of its humour; using the Of Mice and Men formula, as well as character relationships...the cartoon itself falls flat and runs down together. The story is full of contradictions, where the results are just weak. The whole first half of the short is incredibly slow, where two sequences are generally the same, and many elements (and sequences) are reused several times, just to get one big laugh--which was the ending shot of the cartoon. It was just one of Tex's little ambitions in hoping to get a laugh, but it wasn't one which he pulled off successfully. 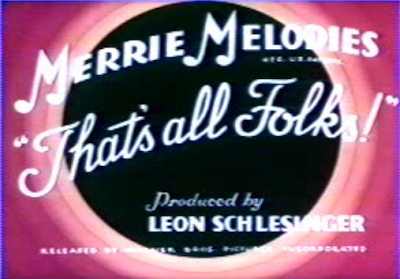