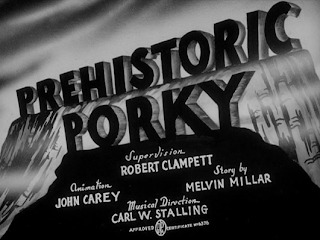 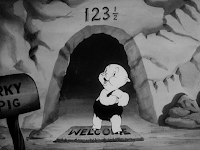 Unlike many of the Porky cartoons that were being released throughout this period; Clampett gives Porky a much larger role. In fact, he is definitely the leading character, even if Clampett had despised the character at that point. So it is at least a special occasion for Porky to be given more screen appearance than what Clampett or the other directors would give him, and it probably pleased Leon Schlesinger, too.

Porky plays the role as a prehistoric caveman who is portrayed as an everyman, and even has a pet dinosaur with a very generic pet name: Rover. 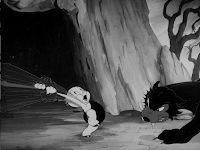 It's a very similar sort of revision from what was seen in Daffy Duck and the Dinosaur; in fact--a lot of the cartoon feels as though it has elements recycled into the cartoon.

Whereas Casper Caveman's quest was to hunt for a duck to eat breakfast; Porky's aim is to hunt for a sabre-toothed animal to create a new skin coat. Instead of being pestered much like Casper, Porky enters into perilous situation of the sabre-toothed animal, and no deaths occur in the ending. Despite a longer and bigger appearance for Porky, it really doesn't feature much spectacular climaxes, it reuses one of the oldest recycled story lines:  "Everyman character -- daily routine -- antagonist -- Everyman at peril".

As mentioned, the story of the short itself really does action, as it feels more or less a gag-oriented short. If you exclude the climax sequence at the finale; Porky's quest to find a new skin-coat really doesn't occur until midway through the cartoon; resulting the first-half with some slow-paced sequences. 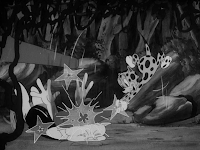 As he is on the way to search for the new coat after reading his magazine from the mail; this pretty much just follows up a string of gags.

He breaks up a group of incoming dinosaurs, one including a supposedly furious Tyrannosaurus Rex by kicking it in the shin, causing the T-Rex to whimper. Believing he has found a possible new coat; he picks up a leopard and poses for what the outfit would look like. With some strong, amusing posing of Porky by John Carey ("Good fit and sporty too"); he attempts to knock the leopard's head off with his club. Being too quick-witted, the leopard whacks him back and dashes off. 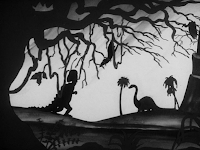 Despite being maybe not a spectacular element in terms of story, take a look at the artistic view of the cartoon. Clampett is certainly going off at a different approach and look for the cartoon, but its shown in a subtle way. The very first shot of the overview of a prehistoric jungle is very effective. It is all featured in silhouette, the dinosaurs, the background and the flying pterodactyl.

Mel Blanc's sound effects even give a very satisfying touch of a scene which is meant to show suspense and artistic control. It all blends in neatly. Notice how even later on in the short; another example for one very intriguing art direction appears in a long shot with Porky singing "A Hunting-We-Will Go".

The silhouette of the vulture is incredibly effective and bold. The layout and angle shows a lot of suspense and mystery in this prehistoric life. The background painter was most likely contributed by Richard Thomas, who worked for Clampett's unit around this era, but anybody know who would be doing layouts for Clampett back then? However that was, did an incredibly wonderful artistic job. It is very effective as it symbolises how jungles are very dark locations, and it is a great advantage to be used in a black and white short. 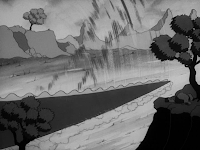 Being Clampett; he has also shown he is artistically ambitious in a few animated scenes. Despite the overlays and the layouts of the prehistoric jungle, Clampett attempts some challenging animated assignments to his unit. The segment of Rover, the dinosaur wagging his tail and thumping the ground would be an evident contribution from Clampett, which is a creative gag, but difficult to stage. 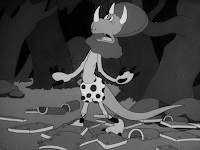 Of course; there are also the celebrity references which are evident of Clampett, as well as some childish jokes that slip by. The stegosaurus' body cracks like a shell where his underwear being revealed.

Despite those kind of gags, on the character designs: the constructions and proportions of the dinosaurs are very simplistic, and conservative. You would take a look at the designs, and believe they are pretty shoddy looking, and lacking basic construction, but so what? It wasn't the purpose.

Of course, this is nowhere as ambitious and challenging as the dinosaurs you would see in Fantasia (which was released the same year as this short); but it would have been a lot more time-consuming to pull off realistic looking dinosaurs, and Clampett wouldn't have felt it was necessary as they were only used for gag purposes; so cartoony and simplistic designs would have done the job.

Another gag which you could say is typical for Clampett, but you see it in quite a number of the early 40s Warner shorts (particularly in Circus Today or Goofy Groceries) where they use reversal of character personas. It features a supposedly menacing dinosaur who is snarling, but then breaks down into a very feminine-like character, giggling and quotes Kate Smith "Hello, everybody". You see it a lot in those early cartoons, and I imagine those type of gags just got tiresome and monotonous that it was no longer used since then. 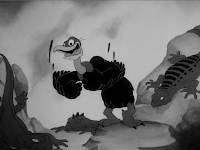 Being set in a complete different timezone. Many eons ago. There is no reason why Warners would not want to satirise their then modern day celebrities. Since he has already caricatured Ned Sparks as a moody vulture, and the dinosaur quoting Kate Smith. One of the vultures, caricatured as Jerry Colonna then goes into song singing These Are Wonderful Days, with the chorus sung by the Sportsmen. 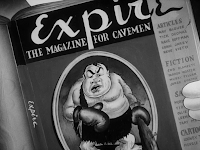 Being difficult to caricature Jerry with the character design of the vulture; a lot of touches impersonating Colonna are evident with his eyes as well as the mouth. The whole opening song is also typical of his lame opening sequences with characters or an off-screen chorus singing popular songs.

When Porky reads through the 'Expire' magazine; Tony Galento is caricatured on the front cover as the caveman. A very effective and amusing piece of caricature as he has the looks of a caveman; in terms of his build. 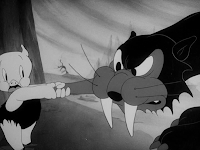 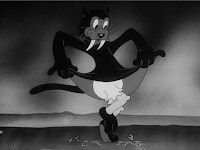 If the chase scene during the climax of the cartoon was going to be a very typical buildup; at least Clampett is willing to be full of surprises. As the finale starts up with a buildup; Porky is cornered to the wall where the saber-toothed cat is ready to finish him. Using his club as self-defence, it clearly backfires with the cat chewing on the cub and spitting the remains out as they turn into pegs. You would see that as a very dated and dry gag; but then that's when the climax kicks off. Clampett deliberately just interrupts the climax by adding a puddle gag, with the characters tiptoeing through a mud puddle, making sure they don't splash; all with subtle timing; from Carl Stalling's tiptoe cliches to Clampett's timing delivery, as well as bit of Clampett humour with the cat lifting his skin like a dress and we see his pantalets.

Just as Porky becomes cornered to the wall; notice how Clampett at least attempts to bring in suspense as you see fast-pacing shots of the sabre-toothed tiger roaring and Porky cowering all with intriguing angles. Some very juicy bit of pacing, which shows how Clampett is attempting to display the sequence as more than the typical piece of action. Porky, cornered and afraid, begs: "Please, Mr. Tiger, I didn't mean any harm, I was only tryin' to get a new suit!". The saber-toothed tiger, making a slight take, goes into more humanised mode, and responds: "Why didn't ya say so? I can get it for ya Wholesale!". The ending line, being a reference to the then 1937 novel: I Can Get It To You Wholesale written be Jerome Weidman.

Overall, Prehistoric Porky in some aspects shows Clampett is showing some effort and less slack with his interpretation of the character as well as the whole attitude towards his cartoons. Since it was quite evident he was bored the character, resulting in him turning out very bland and lazy outputs--Clampett goes into a different turn...at least in the cartoon anyway. He gives Porky a bigger role for starter, even if he is has a very straight-forward, bland personality here. He is also willing to accept challenges in terms of art direction and layout, which is already evident in the jungle scenes and camera angles. It has his weak spots; the story lacked construction and effort, which would have made Tubby Millar responsible for that reason. Once again, Clampett gives Porky another attempt to shine, and he does a pretty satisfying output even in the low point of his career. 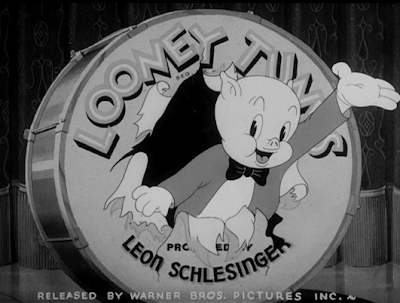