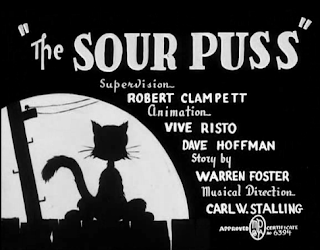 Sort of a little remake of Porky's Duck Hunt; well not quite, but the concept of the fish character certainly supports that statement. Instead of a screwball duck; we have a screwball flying-fish. It appears to be that Clampett, running out of fresh concepts for Porky, is going back on one of his earliest achievements...Daffy Duck.

Of course; Daffy Duck would gain fame after his debut, Clampett gives it a shot with creating the flying fish character. However, it is most likely the flying-fish character was just intended as a one-shot, just used as an opportunity to get some laughs for the audience.

Notice how the black and white cat in this cartoon appears to have had his design used several times in Clampett's cartoons; but they slow some slight variations, and of course, different personalities--but the design is what shows some resemblance: especially with the round snout, black fur and the proportions designed very similarly. See the cartoons Porky's Poor Fish and Pied Piper Porky--both cartoons feature a black-and-white cat: the first being a villainous cat, whereas the latter is victimised by a mouse. Here, the cat is shown being victimised by the flying fish.

Without doubt, the flying fish character certainly has the persona of Daffy Duck, at least in his earliest cartoons. From Daffy's earliest cartoons; you see he has a crazy manoeuvre where he moves around the lake and whoops excitedly by impersonating Herbert Hoover. Of course, Woody Woodpecker would have a similar routine (and laugh); but here it is shown differently for the fish. Whereas Daffy's craziness in his earliest cartoons had some charm to it, here it is just downright annoying. As soon as the cat picks up, supposedly believing the flying fish is dead, he shouts: "That's what you think, chum!" and then begins to laugh with a irritating tone.

He blasts out laughing, "Aren't I funny? It's killin' me, etc." and constantly tries to get an edge off the cat. Consistent pranks and gags are played at the gags, and it's all the same kind of gags that have been used in cartoons frequently. The fish spots the cat's nose underwater and punches his nose like a punching bag. The other one is a little more creative, but generic: he plays his tail like a cello. Which does create a great vibration effect on the animation.

And so, after an mischievous antics with the cat; some more gags then victimise Porky; and that's where some original gags kick in. The yo-yo gag itself shows some fine execution and timing in the animation which you can see for yourself in the GIF at the right.

Then, this turns into a little climax where the cat is conned by the flying fish where the fish uses its (wings or fins) to disguise it as a shark's fin. Porky, able to have already witnessed the fish's trick, believes it is already a shark.

The cat knows that the fish's conduct is another prank; and watches the fin swim around the pool. Ready to grab out the fin to outsmart the flying fish; the cat has already been outsmarted back. It turns out there is a real shark swimming under the law; which causes the cat to double-take and scram out of the scenery. Then, impersonating Lew Lehr (and even caricatured) the shark concludes: "Pussy cats is de crawiest peoples!".

The cartoon short itself has a very slow introduction; as well as the way it has been constructed. The first half of the cartoon is set back at Porky's home at night; whereas the second part takes place at the countryside during fishing season.

Porky is seen sitting at home by the fireplace where he is reading his evening newspaper.

After a little gag which appears in the page first seen of the newspaper of the Wall Street economy failing (supposedly again); it turns out that what is screaming the newspaper headlines on the next page is fishing season beginning the next day.

You would have expected that the cartoon would then move to the following day; but considering Foster and Clampett want to save that for later on in the cartoon; a lot of padding would be required. The padding then turns rather dull already from the first scene. The cat is awakened when Porky asks him with excitement: "Guess what we're having for dinner tomorrow?". The cat, already sour-looking and moody then starts to slowly impersonate a chicken. Porky then dismisses the answer, and reveals it is 'fish', even impersonating the animal figure. And so, this causes the cat to go completely ecstatic, which will be analysed a little further on.

One of the problems from the first sequence with the padded areas; is evident when Porky just rushes out to try out his fishing outfit. You'd get the first impression he was going to go to fishing right away and inform his cat that they are going to go fishing...which would have worked.

The fact he is only trying on the outfit and informing him just appears to be amateurish and it slows down the entire cartoon. Then the scene where the cat goes into an ecstatic mode over the thought of eating fish tomorrow.

He bounces around the room where he shouts out "Fishy! Fishy!" for quite an extended amount of time. In between, he causes a confused canary to commit suicide ("Now I've seen everything"); he kisses a mouse, and then puts around Porky to show how content he is.

The excitement feels a little bit extended whereas it feels it should have been shortened to the right pace. Don't get me wrong; I see how Clampett is going to go off his boundaries by creating a take which is wacky and edgy; but its just the pacing that stands out as the problem. Though, in-between one gag which makes up the whole long opening: the canary committing suicide. This shows how even in this part of his up-and-down career; he is even pushing the boundaries. Here, we are actually viewing a cartoon character killing himself, the delivery of the line, the execution is all very amusingly put and even controversial to television censors. Of course, this is the gag which Clampett would love to use several times more.

Then late at night; the first half still shows some padding where we get a whole sequence of Porky and the cat asleep. Porky sleeps rather normally, counting sheep. The cat, however, puts a lot of emphasis on his desire to eat some fish that he counts fishes. Later on in the morning, he has finished counting, and his mouth becomes very tired. Though to start off it seemed a little bit of a pointless sequence (which it is); the acting of the cat struggling to count further shows some realism in the acting and some comic exaggeration; especially since the cat counts to 1 million.

The cat, himself, in the morning scene looks very human in terms of his proportions and acting. As he grabs out a bottle of sleeping pills from the shelf, believing he is going to self-ingest himself; he pulls out the cork which appears to have a hammer inside and just whacks himself on the head to wake up. It's not so much that he hits on the mallet on the head is creative, but the fact he pulled the cork out of the bottle (and forming into a mallet) was very cleverly animated.


******
The cartoon, as a whole, showed some of Clampett's new charm in certain areas whereas in other areas it shows some of Clampett's old charms. Some of Clampett's own original ideas are only seen in little areas, and one of the examples would be the canary committing suicide. This is evidently the most original gag of the entire cartoon, and it is a slight turning point in Clampett's creativity...as he finally starts to push the boundaries to even further than what he would usually dare. Then of course, I speak of his old ideas that were charming. The flying fish was an attempt to impersonate Daffy Duck, but the character as a whole was very weak. Even though the fish had a wacky personality, it showed no appeal at all. The laugh was incredibly irritable, and its as annoying as one of Ben Hardaway's rabbits. The story, as mentioned, was in fact paced at odd areas. The first half showing a lot of padding, and a lot of action at the second part. Porky, as usual, doesn't appear to get many opportunities in the cartoon, whereas he is playing, pretty much, the same role as he had done three years earlier.
Posted by Steven Hartley at 16:27