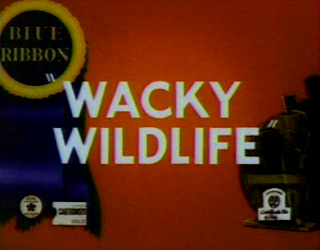 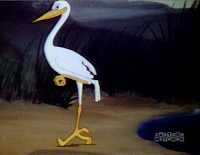 From the many travelogue cartoons that have been directed by Tex so far (and also including Africa Squeaks); this is one cartoon which doesn't appear to associate with a theme too much. No doubt the theme of this spot-gag is based on wildlife; but at times there are certain aspects which some sequences could have belonged in other spot-gag cartoons that Tex had directed. 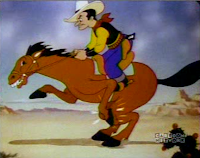 Several examples of that is evident where the cowboy is seen riding in Texas with his horse. The horse and the cowboy appear to be riding in close-up but as the camera trucks back it turns out the horse is impersonating with his hoofs faking a horse ride.

Whereas the whole gag setup is amusingly done; the scenery looks as though it doesn't really belong to the theme of wildlife; especially since there is a cowboy at the scene. You could say it would fit in to Detouring America, or some of his other spot gags. Also, a lot of his previous spot-gags had featured previous scenes which showed wildlife creatures: (i.e. The Isle of Pingo Pongo, Cross Country Detours, etc). It feels as if there some leftover wildlife gags that weren't used previously and were all crammed into this one cartoon; considering the cartoon lacks any form of narrative. 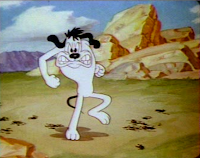 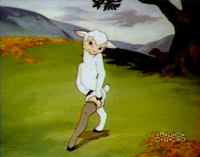 Also, Tex also has the tendency to recycle a lot of elements that he has used in his previous cartoons. Some of them are recurring gags; whereas others are just recycled. A great example occurs towards the end where we find the dog towards the end acting incredibly wacky with frustration. It is clear he is very angry by tearing out parts of his own hair. The narrator questions about his wildness, in which he breaks out: "What makes me wild? What makes me WILD? LOOK!" Camera then pans towards a group of lumberjacks cutting off the last standing tree after what was once a whole area full of them. It is an odd gag which appears to have appealed to Tex; but this is quite possibly the most subtle version of all his dog gags. The acting of the furious dog by Mel Blanc is top-notch as well as the whole pacing and comic deliverance.

Not to mention, other recurred gags are seen only briefly in the brief sequence featuring a field of lambs. One of the lambs, however is noticed by a narrator who comments: "Ahh, there's nothing like a good leg of lamb." Of course, Tex is pushing the boundaries--the lamb then reveals her leg which is proportioned like a human. The lamb is wearing a stocking with the music cue It Had to Be You played in the background. Watching a dirty joke involving animals is just beyond creepy; but luckily here it only lasted a matter of seconds, unlike in Cross Country Detours it had lasted over a minute. 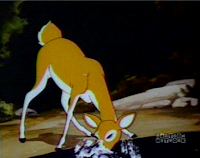 If I were to pick point my favourite scenes in the cartoon; it would have to be the first two sequences. To me, they're excellent in terms of its setup and satire. They are both very hard animated scenes to do in different aspects. 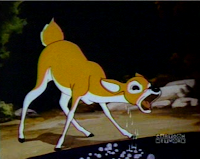 The first sequence is far more broader than the latter. You get a very shy looking deer who is approaching the lake shyly, and "sips quietly". Of course, the gag is...the deer is drinking like a slob in the lake; and Tex's timing could have not been more perfect. Carl Stalling also blends in greatly, too; he  brings some great, quiet music which reflects on the timidness of the deer, and then cuts straight to the music cue of (I think) How Dry I Am--when the deer drinks like a slob. Mel Blanc puts in a very pleasing touch of the deer's embarrassed burp; "Excuse me." 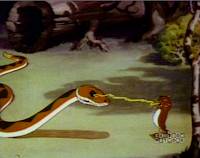 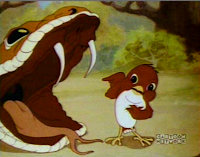 Then, to focus on the following sequence: which is also great on its setup. Snakes are infamous for their hypnotic powers, as told by the narrator. Here, the snake hypnotises the bird. Some great effects animation of the hypnosis bolt; probably by Ace Gamer. Just then, the bird slowly begins to approach and walk inside his death as the snake has his mouth wide open. Carl Stalling's cue enters as the sound of death drums brings in the suspense. Just then, as the hypnotised bird is about to walk inside the snake's mouth, he immediately tricks the audience responding: "If ya think I'm goin' in there! You're crazy!", and turns the other way around instead. 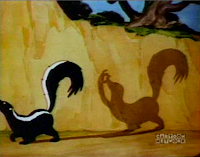 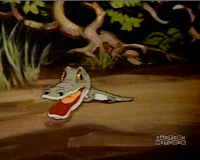 Then, there are examples from Tex's gags which are more generic and a little exaggerated. The skunk gag, however, is described as a specie which every mammal or person would want to avoid. The gag is even the shadow is covering its scent which is incredibly exaggerated in its subtle way. Then, there is a swamp which is infested with a group of hungry alligators. One of the alligators is swimming out of the river, with a very small body but the head proportions being accurate. The narrator asks: "Say, what in the world happened to you?"; with the alligator responding: "Well, I've been sick". A little weak gag which really lacks a funny conclusion to it. Anyone know whether the 'I've been sick' remark references anything, or if it was just a funny quote written for the short?

Then, despite the thin narrative and the weaker gags; Tex has already exerted his animators to realism. The animation of the animal animation looks very well (at least, a little too real); whereas the backgrounds by Johnny Johnsen show some great detail and arcs. 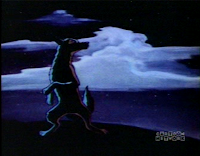 A great example of how the animation has shown some rapid improvement is seen during the camel walking.

The narrator describes how the camel can spend days in the desert without drinking but interrupts, "I don't care what you think, I'm thirsty". The cameral shows some great weight, which is one of the key techniques that animators struggle in animation. Johnny Johnsen's backgrounds show some great backgrounds; as well as some great airbrush work. Note the reflection in the water at the very beginning of the cartoon; which is very colourful and glamorous artistically. Also, Johnny creates a great illusion for the night scene for the wolf crying at night. Wheras the wolf shouts: 'Hey Mabel, come on out!' (reference, anyone?). 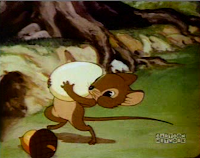 Now to reach some final pieces to analyse particular sequences. Both the sequence with the field mouse and the birds have a particularly lengthy sequence with a monotonous piece of action where you wait for the gag to appear. Both punchlines are just unfunny and pointless. The field mouse approaches an egg and keeps on replacing it with a chestnut, vice versa. 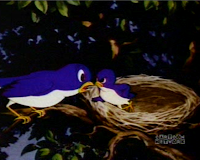 The action appears for about 30 seconds; where the mouse picks up the egg to the other side, picking up the chestnut to the other side...and it all repeats.  You are already at the point where you are bored of the gag, but then the mouse pauses the action and remarks, "Monotonous, isn't it?" and proceeds to carry on with the action. A pretty poorly paced gag which didn't really take much advantage to its punchline.

A gag similar to the field mouse gag was used for the birds berating towards his mother. Of course, you can hear nothing but the twittering of a bird; and communication is difficult to make out what it is. After berating the baby bird on the nest, he responds in a tough attitude, "Aww, lay off the bird talk, ma. What's on ya mind?" and spits in anticipation. One of the last voices to have ever been voiced by Berneice Hansell whose childlike voice was just turning out of fashion for the Warner cartoons, and even cartoons in general. The punchline and even the voice by Hansell didn't take advantage of the sequence as well.

Wacky Wildlife is presented as a rather fragmental spot-gag by Tex. There are elements which feel rather disconnected to the theme of 'wacky wildlife' whereas there are also gags which feel abstract, albeit some very good ones at the opening of the cartoon. Much of the gags had recycled elements from previous cartoons or just recurring-stringed gags which doesn't make the notion of the cartoon appear very original at all. Though, Blanc's voice work was very top-notch as he managed to save and take advantages for certain sequences which were flat in terms of its timing. Nevertheless, it is a very rich Warners short artistically, even if it is a far cry from the ambitious Disney Studio, who were expanding their talent; but it appears even the unit had a flair for studying and animating the anatomy of the animals with such realism, including the fawn. It's just a very straightforward spot-gag cartoon which lacks any basic construction but only has some moments of charm and true satire. 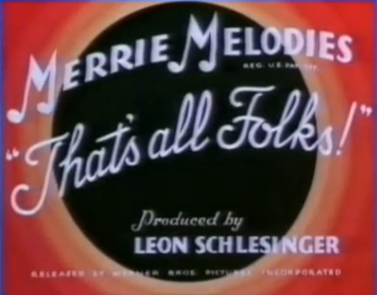