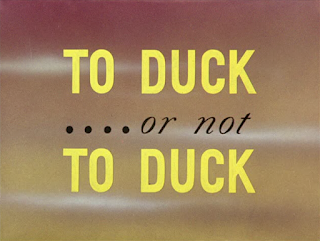 By this point at the Schlesinger studios; Daffy Duck or Elmer Fudd had become so established it gave the writers an opportunity to expand their roles in the Looney Tunes universe. In this case, Ted Pierce takes the chance of penning the first Daffy/Elmer collaboration. It makes a fitting combination to expand Elmer's activities as a hunter, asides from hunting "wascally wabbits".

As far as colour styling goes; it's an unusual blend. The sky colour has a sepia wash look to it; which is seen all through the short with Technicolor-painted characters like Daffy or Elmer applied to the backgrounds. Another example of experimenting with layouts and colour styling; this short's takes on a dangerous task to pull it off accordingly; that only Gene Fleury could tackle. 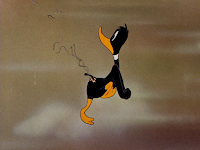 Chuck Jones was still heavy with smear animation in light of The Dover Boys. The opening sequence of Daffy flying up the sky is an example alone. Humming to himself casually; he narrowly misses the gunshots fired by an unseen hunter. He uses the clouds to protect himself.

As he carries on, he makes a snide comment on the shooting: "Confidentially, those hunters couldn't hit the broad side of a duck." As he eats those words; a bullet strikes Daffy's tail-feathers - he them hams it up reacting melodramatically and falls.

Bobe Cannon does a stellar job on a complex animation assignment as the scene shows how involved Daffy is, as well as the various actions he pulls across the scene (like his "invisible bicycle" trick). Daffy falls to the ground; but lands safely by the softness of a pillow and is retrieved by Larimore, Elmer's hunting dog. Daffy's brief "resurrection" on lecturing Larimore on how to retrieve a duck adds to the touch and charm of Daffy's persona. 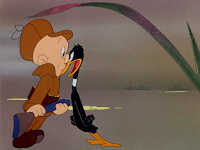 And so, Elmer apologises to a motionless Daffy Duck, but proudly acknowledges he's a "gweat sportsman". Daffy retorts to Elmer's comment and slowly awakens, offended by his biased comment ("Listen, sport! You don't know the meaning of fair play!"). Daffy bullies and dominates Elmer further on, by removing his hunting equipment and stripping him to his boxer shorts. He proves Elmer's weak without his weapons, and so challenges him to a "fair" fight.

The sequence proves that the Elmer/Daffy alliance in the short has merit. It sheds more light on Daffy, and Ted Pierce's writing works so well around his character it would seem slightly out of character in 1943 for Bugs Bunny to perform. 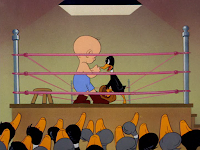 Daffy's domineering is elegant and spontaneous, especially as he strips most of Elmer and cornering him. It's a funny foreplay of a smaller, defenseless character bullying a bigger, equipped man so effortlessly and entrancing.


Another tough but effortless piece of animation by Ken Harris; who nails Daffy's domineering personality. Both characters express a lot of personality on screen; and their actions read very clearly - especially the vulnerability on Elmer. Harris navigates through Chuck Jones' and John McGrew's layouts beautifully - particularly in the scene of Daffy cornering Elmer to a wrestling ring, which for some reason is located in the middle of a swamp - and already surrounded by duck spectators. 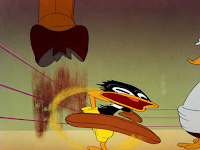 Daffy's unconstrained personality is nailed milestones ahead in the sequence showing the start of the fight. Both the duck referee and Daffy are in league together in making it a very unfair fight for Elmer.

Before the match begins, the referee exhorts the two opponents to "fight clean". His forth-wall "wink" is a fitting touch to indicate his conniving trick. The referee carries out the rules of the game; and asks for "no rough stuff". 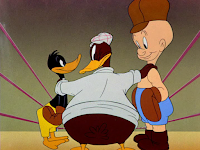 So, the referee uses Elmer as an example by punching and assaulting Elmer each time he demands: "None of THIS! Or THAT! Or like so!". Ted Pierce takes advantage of his interest for violent, physical gags; and uses them comically and appropriately to make the fight unfair on Elmer's behalf.

To be reassured; Daffy recites the off-limit rules of the fight by repeating the referee's actions and regulations and injures Elmer even further. It's a hilarious piece of action by Daffy; as Mel Blanc's delivery on the character makes him appear law-abiding and innocent, which is of course contradictory. It's a hilariously conceived gag implies the ducks are hypocritical and unfair, much like Elmer. 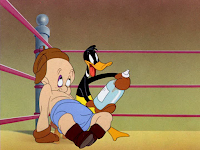 More of Ted Pierce's physical ideas kick into gear that fit into Daffy's spontaneity. An example occurs once Elmer is knocked out at the corner of the ring; encouraging him to fight back: "Give it to him, champ! Let him have it, champ!". Spontaneously, Daffy feels the bald texture on Elmer's head. He suggests, "How about a little somethin' to stimulate the scalp?". He produces a hair tonic bottle, and knocks him out-cold again.

A cross-dissolve manipulates time as a weary Elmer walks over to shake Daffy's hand before another fighting round. With the mannerisms of a screwball; Daffy plays on Elmer's mind asking "Which hand do you take?"...resulting in a little game of guessing the right hand.

Once Elmer picks the hand; Daffy reassures him before he smashes him with a mallet. Although the gag is a tad predictable; Daffy breaks the forth wall prior to the outcome, commenting: "Ain't he a dope?" which obviously implies Elmer's falling into a trap; but it's his gullible nature what makes the delivery of the gag work. It's a funny little sequence that conveys Elmer's naiveness wonderfully, and Ted Pierce's good gag sense forth-wall lines blend together. 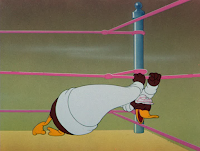 Despite funny characterisations and gag sense in the cartoon; Chuck Jones' direction still has flaws that adorn the short. His pacing is a little sloppy in the sequence where the referee introduces the two opponents. First, the transition from a threatening Daffy to the announcement of the fight is too fast-paced and abrupt; as it doesn't manipulate time with a cross-dissolve. The sloppy timing is evident from Daffy taking Elmer to the ring; that cuts right to an establishing shot of the duck spectators surrounding the arena. 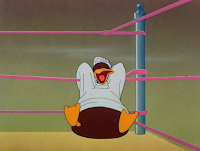 As the duck referee is about to introduce Elmer; he laughs mockingly at his appearance: "He's a dog! You can have him! What a trap!" and breaks into hysterical laughter, and hangs onto the rope to control himself. Mel Blanc's delivery on the laughs is irresistible and entertaining; although it slows down the sequence slightly. 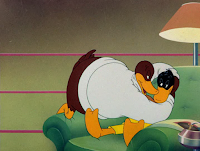 The following scene where the duck referee introduces Daffy Duck, paces slower than the laughing sequence. The duck referee looks at Daffy with absolute admiration. He admirably caresses and snuggles onto a pampered Daffy as he announces him as: "Daffy 'Good to His Mother' Duck".

It's a funny sequence alone to express an obvious comparison: the referee shows strong favouritism towards his own specie, being Daffy. But as part of the story, the sequence is slightly over-written with a little too much filler that doesn't quite fit the tone with the rest of the short.

The gags in the short that are probably the most innovative and better accomplished are the gags focused on Elmer's dog, Larimore. Between the introductions from the referee; the duck spectators boo in unison at Elmer; while Larimore cheers on Elmer - which results in brickbats getting thrown at him by the duck spectators. The reactions reverse after Daffy's introduction; with the ducks cheering on him, while Larimore boos at him - getting the same reaction from the spectators. 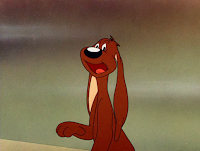 Chuck's layouts and Ted Pierce's writing create a hilarious visual juxtaposition that fits the cynical humour in the Warner Bros. shorts. The duck spectators are a large crowd adorning the arena; indicating the number of support Daffy has. Meanwhile, Larimore is the only supporter of Elmer - and sits in a completely isolated stand. Chuck's timing on the objects flying at Larimore couldn't have been executed better or funnier.

Another great little line occurs when Larimore spectates the wrong-doings in the fight. Breaking the forth wall, he observes: "Y'know there's somethin' awfully screwy about this fight...or my name isn't Larimore. And it isn't". Of course, he's been called that all through the picture. 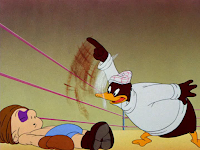 After being knocked out again from Daffy's mallet; the referee unfairly declares him knocked-out by rapidly counting to ten. He declares Daffy Duck the winner, where he receives a standing ovation from the duck spectators. 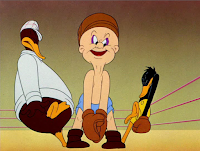 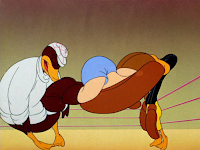 Elmer, regaining consciousness, steps in and complains about the violations of the rules. Finally getting even with the two ducks; he recites the rules of the game and performs similar violent actions towards them, as he makes his point.

A decent closure gag for the short; the abrupt ending and sloppy pacing around the short has marred the cartoon slightly. The fight sequences aren't paced or executed very well as it shows little or no build up to a climax; as it's merely a string of gags of Daffy tricking Elmer Fudd. While Elmer gets even with the ducks - the ending gag feels somewhat rushed and out of place - given that the short has a slightly smaller running time compared to the average animated short.

To Duck or Not to Duck contains some funny elements of characterisation with the occasional perfectly-executed gag; but putting it altogether it's a slapdash effort for Chuck Jones. With a decent introduction and a great build-up that leads Elmer and Daffy to the wrestling ring; most of the short's problems are laid on the fighting scenes. The pacing is very inconsistent and unorganised that was sometimes sluggish or too abrupt. It appears Ted Pierce was more interested in conceiving physical gags rather than fixing the structure of the plot. Pacing problems asides - it points out the potential and opens the possibilities the Elmer/Daffy Duck pairings that resulted in far superior cartoons which later followed. Audiences might've taken it for granted upon its first release; but today  - Jones' short doesn't hold up too greatly as a first effort of a Daffy/Elmer pairing. In all, the cartoon is passable and an innovative effort of pairing the two iconic characters. 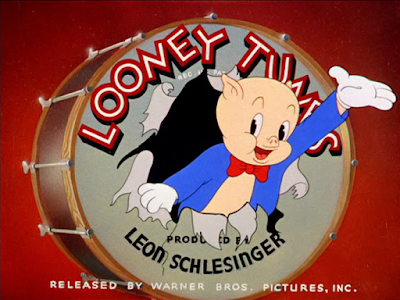