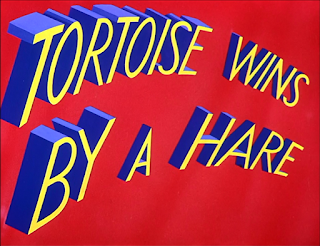 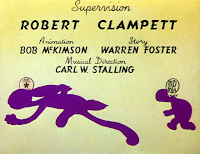 How often is Bugs Bunny portrayed as a loser? Rarely. As mentioned in the original Tortoise Beats Hare review; Tex Avery had already begun experimenting with Bugs' personality from his standard streetwise persona. Once Tex left the studio and Bob Clampett inherited his Merrie Melodies unit, Clampett takes the opportunity to reuse Bugs' "sore loser" personality and take it to different heights - thus, creating a sequel from Tex's fable parody. 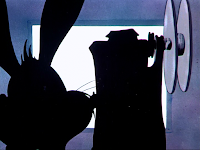 The opening sequence has a combination of fresh and reused material. Much of the opening is stock footage from the previous Cecil Turtle short, which observes the race between the two opponents as well as the petty tricks the rabbit performed. Not only does it cut corners and keeps within budget constraints - but it also creates good exposition for what is yet to come - and the frustration Bugs Bunny feels. 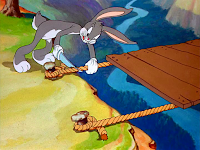 Additional narration masterfully voiced by Mel Blanc is kept to the style and energy of Clampett's direction as he excitedly commentates on the race which makes up for the more conservative pacing from the original Tex short.

Up until the closing of the commentary - it's interesting to see how the footage had been deliberately manipulated by removing Cecil's cunning tricks as indicated in the original ending - therefore replacing it with new animation of Cecil boasting about his triumph. 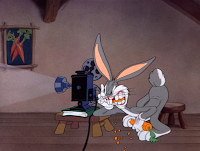 Following that - Rod Scribner delights the viewer with a tour-de-force piece of character animation that helps convey Bugs' frustration and confusion perfectly. It's no easy ride for any animation professional to animate a character whose goes through a wide range of emotions and mood swings. Bugs finishes watching the reel outraged and astonished: "How does he do it?" as he spits out bites from his carrot and vigorously kicks the projector away. 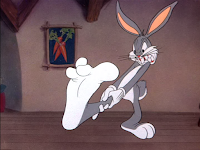 Bugs paces around his home, bewildered: "I can't understand it! It's against the laws of nature. We just ain't in the cards! A toitle beatin' me, a rabbit?!". Then his emotions switches to arrogance and pride: "Yeah, I'm an athlete. I've got an athelete's physique. Sure! I got an athlete's legs. Coitenly, I even got an athlete's foot!" and shows off his foot - with the proportions of a human foot. 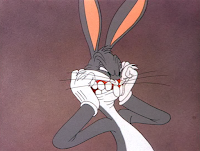 The opening sequence is an excellent piece of exposition that reveals Bugs' motives and a rare observation of his true colours - or at least how Bob Clampett interprets him. His soliloquy indicates that he feels threatened and disgraced of being outwitted, and is determined to restore his pride: "How does that moron do it? I'll find out his secret, if it's the last thing I ever do!"

The subtle animation switch from Scribner to Bob McKimson in the dialogue ("And I will, too") creates the perfect mood change, as McKimson could capture that appeal into Bugs' sudden relaxed attitude - while Scribner could push the poses and hit the accents abruptly to express his temper in an over-animated way. 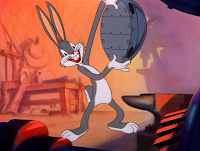 For a character whom the audience have grown to love for his streetwise, mischievous nature - Clampett's meddling of his standard personality gives him a dark side that movie-goers hadn't likely experienced, and perhaps feel empathy for. Since Cecil Turtle is portrayed with low cunning that drives Bugs to insanity - the audience would root for Bugs' second chance to win that race. 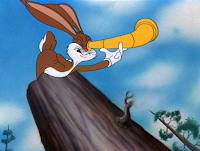 To get what he wants - Bugs takes every chance possible by disguising himself to get information out of Cecil Turtle - which eventually created identity confusion from the rabbit population. Determination for Bugs to win is not only centred on the rabbit himself - but the majority of rabbit spectators who are willing to cheat, putting their arrogance above everything.

Bugs' optimism and motivation to win has poisoned his mind, to the point he overlooks the subtle tricks Cecil planted on him. This is evident when he designs the "modern design and streamline" shell. Once he dresses behind a curtain, complete with a swim cap on his head - Bugs could become a victim of his own disguise. This indicates that Bugs thinks he's becoming craftier than before by learning from his mistakes; but is oblivious to the potential traps Cecil has lied in store for him. 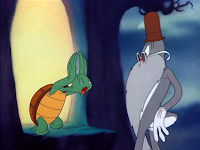 Cecil's superior craftiness is essential in the sequence featuring Bugs' disguise as Bill Thompson's Old Timer character from Fibber McGee and Molly. Bugs disguises himself as an elderly critter in an attempt to seek information out of Cecil's secret method for beating Bugs Bunny, as asked: ("Tell me, Johnny! How come you always beat dat rabbit!").

Cecil, who can see through his disguise, deliberately gives him a false answer - hinting he has another cunning trap set for Bugs Bunny. Cecil claims: "The secret is modern design, y'know, streamlinin'". He reveals a blueprint of his "air-flow chassis" - which is very clearly a design of a turtle shell, which Bugs dimly sees past. A masterwork of character animation and story arcing - Clampett's bad habits of abrupt cuts are revealing in the part where Cecil explains his comparison to how "rabbits are built all wrong for racing" compared to turtles. Whether it was an intended cut or a deleted piece in-between - it's a mystery.

Taking advantage of Bugs' unintelligence, he carries on further by criticising the "ridiculous ears" as just "wind resistors". Clampett's timing has a funny touch to it as Bugs attempts to discreetly write the information in a typewriter hidden under his heard - indicating that Bugs' disguise and role play has no subtlety at all. Before leaving, Cecil makes one cutting remark which foreshadows the rest of the short: "Rabbits aren't very bright, either." 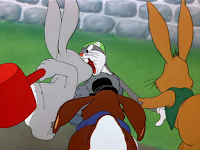 "Rabbits aren't very bright". Warren Foster takes advantage of the quote and builds it as a running gag and a recurring problem for Bugs. While Bugs is winning at the start of the race, the rabbit spectators mistake Bugs' "modern design" costume as the turtle. In an attempt to sabotage the race - the rabbits paint the road lines to a corner facing a brick wall; giving Bugs an accident. 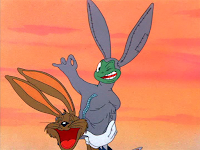 Assaulting Bugs, he protests: "Toitle Shmoitle! I'm the rabbit!" - but the close-minded rabbits are too ignorant to see past the disguise and continue attacking him. So, Cecil reinforces the misconception by disguising himself in a rabbit costume and munching a carrot, staying in character: "Yup, that's the turtle alright!". So, the rabbits allow the disguised turtle to continue the race freely while Bugs fights his way to finish the race. 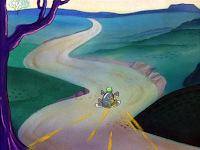 The problem worsens as when Bugs speeds past the rabbits to outrun the turtle. The muddle between both identities thus turn Bugs' race into a nightmare as the mobster rabbit shoots at his shell - where the ricocheted bullets spare him, followed by underground explosives that delay his speed.

Foster's genius at conceiving misunderstood situations results in Cecil winning the race and once again - outsmarting the rabbit. 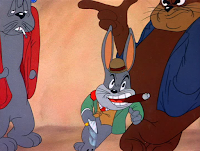 The misunderstanding between the identities plays a key role in a mini sub-plot that centres on a group of rabbit gangsters. Prior to the race, an exposition sequence reveals that Bugs isn't alone in his motivation to win the race. The rabbit bookie comments, "We bettin' everything we got on that rabbit to win. In fact, we don't even think that the toitle will finish, do we boys?" - hinting a devious plot that would foreshadow Bugs' foiled disguise. 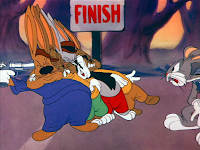 Building up to the cartoon's climax - Bugs overtakes the turtle in the race and wins again. By a twist of fate, the gangsters hide behind the finish sign - mistaking Bugs as the turtle. At his near moment of triumph; it's crushed as he is pounded by the mobsters; while the other rabbits give the race to Cecil. 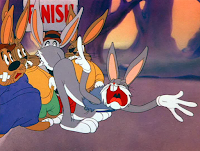 Defeated and confused, he finally cracks as he shreds his disguise away and cries out: "You fools! Whatt'ya doin'? I'm the rabbit! The rabbit! Look, I'm the rabbit!". The finale is another beautiful showcase of Rod Scribner's over-animating that nails Bugs' devastation perfectly - expressing a lot of imagination in Bugs' shape to get a performance out of it. Upon realisation, the gangster rabbits say: "Meh, now he tells us!".

Knowing they've lost their entire fortune on gambling; they take a pistol to their temples simultaneously and commit suicide right at the finish line as the short abruptly cross-dissolves. Their suicide at the finishing line itself is a visual metaphor - marking where their lives will "finish". A cynical, dark ending itself - Cecil's comments on rabbits being unintelligent and his trickery had lost to several lives. 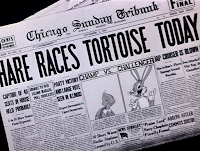 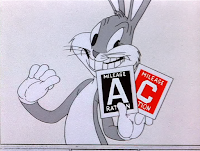 (For those interested in the hidden gags; the newspaper scene is full of it - though WWII-related.  Perhaps the most alarming in the shot of the front paper is the mini-headline reading "Adolph Hitler Commits Suicide" - a fact which was foreseen two years later. Ironic, how the petty race tournament makes bigger headlines than the suicide headline. In the close-up of Cecil and Bugs, he shows off his "A" and "C" ration cards - hinting it's his "secret weapon").

What also makes the short so rich asides from characterisation and storytelling - is Clampett's take on speed and energy compared to Avery's fable. Whilst Avery had Tortoise Beats Hare built towards a gradual climax rather than speed; Clampett takes complete advantage of that. The energy helps convey Bugs' arrogance and pride perfectly throughout the race sequence. 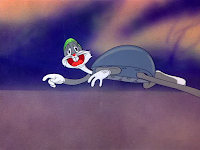 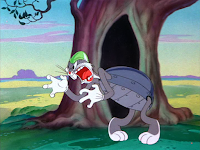 Just prior to the race, there is a great piece which captures the arrogance persona. This is evident when Bugs slaps Cecil's face into a tangle - to emphasise he is the dominant bully, and brawny - compared to the brainy Cecil.

Bugs' "modern design" costume also helps capture the energy and speed of the race - as Bugs runs a big streak by easily outrunning the turtle. He bursts with excitement as he shows off his costume and goes into funny poses, which displays too much confidence in his part. Clampett even manipulates the speed to the point where Bugs' speed goes completely out of frame. This example occurs as Bugs speeds close to the finishing line as he races rapidly past to the point where the camera loses track of him.

Comparing the sequel to it's original predecessor - it's remarkable to see the major difference in the Warner short's sharp-timing and broader energy in a span of just two years. The sequel is completely focused on frustration and motivation; which is blended perfectly altogether in every department. Clampett's energy and timing is spiced up wonderfully. The time period couldn't have been more perfect; as it was made during the Second World War - when animation from the major studios became more cynical and vibrant due to that effect. Warren Foster couldn't have depicted a more compelling and hilarious scenario to indicate another of Bugs Bunny's failure. The characterisation and circumstances scattered in the cartoon is incredibly well founded, it's easily up a couple of notches from Tex's animated short. For an animated short, Cecil has so much character written around him: a conniving trickster who takes Bugs Bunny to a level or degree that audiences hadn't considered or experienced before. 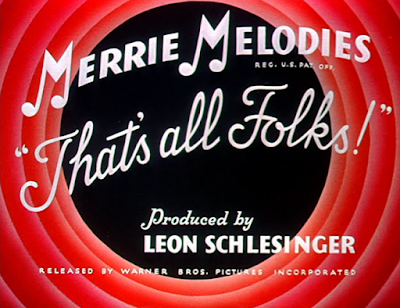