As World War II had hit hard at the United States - it gave the opportunity for many animation studios to make satirical anti-Nazi cartoons to mock the enemy. At Warner's, Norm McCabe made an allegorical short depicting Hitler, Mussolini and Tojo as ducks in The Ducktators. Friz Freleng pulls it off similarly in this cartoon; but told from a cat-and-mouse perspective. 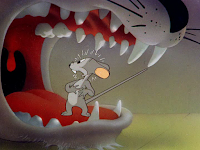 The short itself is a satire depicting the cat's low cunning; which parallels Hitler's double-crossing schemes against the Allies; the most infamous being the non-aggressive pact made between Nazi Germany and the Soviet Union in the summer of 1939.

Another notable example occurred with British Prime Minister's Neville Chamberlain's "peace in our time" speech, concerning the Munich Agreement. Remembered for it's ironic value, Adolf Hitler's continued dictatorship and the invasion of Poland followed with declarations of war from France and the United Kingdom. Whoever wrote the short (Mike Maltese or Ted Pierce?), it's an innovative portrayal of two feuding sides, like the mice and the cat, attempting make an appeasement without decreasing the enemies' power. After being double-crossed, the Allies are forced to declare war.

The opening sequence establishes a fitting exposition of the mice's peaceful times. Raiding the kitchen; they celebrate their carefree liberties by singing Ain't We Got Fun? as they engage in several activities around the room - like skiing down window blinds.

Their fun is at the brink of danger when a snooping cat observes them through the window. One timid mouse notices the cat's presence and panics as he takes caution to the grey mouse.

The grey mouse responds with an imprudent attitude: "Aww, there's nuthin' to be afraid of. He can't hurt us. He can't get in here!". A moment later; the grey mouse's words are eaten as the cat effortlessly makes it into the kitchen - creating a panic across the kitchen. The attitude itself reflects the behaviour of other Allied countries who overlooked Hitler's wicked policies. This resulted in the majority of Europe invaded by Germany at the start of the war. To some extent; it can be linked to the Japanese attack at Pearl Harbour - which immediately followed on the nation's declaration of war.

Upon the invasion of the kitchen, the mouse watchman cries: "The cat! Lights out!"; creating a blackout across the kitchen - another key element of the Second World War. The mice run across the rooms in an attempt to save themselves from the cat and back to their mouse-hole.

The grey mouse, however, walks into a trap as he finds him approaching into a set-up mouse hole, masqueraded as the cat's mouth. Whoever painted Friz Freleng's backgrounds on this short (most likely Paul Julian - 13/04 edit: I stand corrected; it was Lenard Kester - see comments) - the blackout scenes create a very subtle tone to make it not completely dark on screen - but by adding value blends to interpret the actions happening. The silhouetted mice in the background helps fit the mood and effect required for the scene. 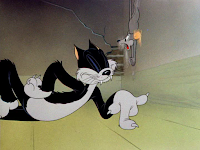 The conference between the cat and the grey mouse is very compelling in developing characterisations. The personalities read very clearly: the cat is conniving; while the grey mouse is cowardly and greedy. Once the mouse is cornered by the cat; he entices the grey mouse by acting friendly ("What's the rush? I'm not going to hurt you") and offers him a slice of cheese.

Immediately, the mouse is enchanted by the appetising piece of cheese as he attempts to take a bite. Graciously refusing him a piece; the cat manipulates him by making an appeasement: by offering him an endless supply of cheese in exchange for the mice to serve for him. The grey mouse, initially reluctant, is once again distracted by the scent of cheese which the cat uses as bait to manipulate and control him.

It's a great satire on dictatorship as the cat plays all the elements of a dictator: full of low cunning and manipulation. Henceforth, the mouse lives up to the title: becoming a 'fifth-column' as he cowardly agrees to side with the enemy for his own desires. 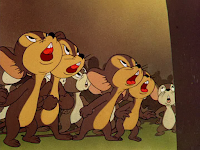 In a bid to portray a seminar as riveting and innovative - and yet advancing the story: the solution is answered. Instead of a hearted argument which is typically portrayed in conference sequences for war films; the mice's two leading arguments are dealt in a song battle. The feud sung in the melody of Blues in the Night is itself a bizarre, uncanny concept - but it's hilariously executed that it's accepted easily. 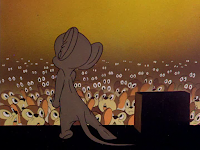 The grey mouse sings to the mice committee in an attempt to convince them to fulfil an appeasement policy with the cat. The alternate lyrics are written with little references to the song like: "Dat catty done told me / out there in the kitchen" or "that cat is a two-face / A treacherous thing who will leave us to sing 'the blues in the night'". The parody is so inventively written that the sequence itself surpasses without being too corny or in bad-taste.

The right touches are blended well in the sequence as Friz Freleng's right frame of mind of dynamic staging comes together neatly that would otherwise be difficult to pull off in animation. An example appears like the rear shot of the grey mouse appealing to the mice committee. It's a great piece of composition that captures the rally-like appearance as well as its charismatic nature.

The shots also cut to the cat who eavesdrops the song battle - nodding with approval over his crooked plan working accordingly. The cat's take at the defending mice rebelling against him ("That cat's a rat just the same!") has a nice touch to it.

And reluctantly, the mice agree to the appeasement. Falling under the power of the cat; he has their rights breeched as he enslaves them so he can live luxuriously and pampered. Some reluctant mice attempt to revolt, with one deliberately filing his nail hastily - but this results with a flick on his head.

Like Hitler, the cat's two-faced backstabbing persona is revealed as he starts to take complete advantage of the mice's fear and oppression. Whilst ordering from the menu, he slyly remarks: "Did you ever have a feeling that you a--wanted something, and...but you didn't know what it was?".

Making up his mind, he asks for a "nice, fat, tender mouse". Alarmed, the majority of the mice make a run and retreat back to their holes. The grey mouse, attempting to remain the cat's good graces, finds himself a victim of circumstances. The cat hungrily glares: "You're a nice, fat, tender mouse. You'll do". The grey mouse makes a lucky escape and returns to his hole - resulting in the rest of the group to declare war on the cat.

The grey mouse's fifth-column personality appears to play a key identity; as he's the only grey-coloured mouse compared to the other brown mice - hinting he's the outcast and likely traitor of the group.

As the mice prepare for war; the allegorical satire turns to a more patriotic and hopeful note. As the war wouldn't end for another two years - it's ideal that Friz would have the Allied mice win for the sake of sticking to its principals and patriotism.

Friz Freleng's montage sequence of the mice troops is heavy with war propaganda. Not only is it evident in the off-screen chorus singers singing We Did It Before (And We Can Do It Again); but the "Buy Bond" posters, too - a common propaganda poster for animated cartoons.

Gags that are standard to the style of Warner Bros. coincide with the nationalistic sequence; as evident in the shot of an assembly line of mice troops having their troop hats installed. The machine appears to be out of action, as one mouse unexpectedly gets a boater placed on top of his head. 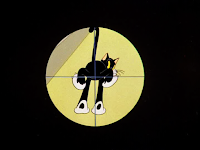 For the battle sequence; it's a fitting combination of great gagwork and what Friz Freleng's masterful direction of comic timing and staging has in store. The cat is being chased by a mechanical-like bulldog; controlled by the mice. To keep it inventive and entertaining; Freleng includes a great POV scope shot of the cat's ambush - while the mice off-screen are trying to coordinate the target at the right position. 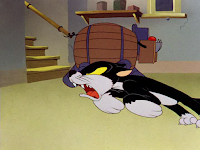 To make the mechanical-bulldog come across as great effort; the mice pull an extended pair of false teeth to bite the cat's tail. Stalling's frame of mind for action fits accordingly as he uses Johann Strauss' Perpetual Motion for the battle sequence.

Freleng's staging ideas makes the chase all the more exciting to watch - as the cat and the mechanical-bulldog run at different perspectives animation-wise. The cat finally surrenders when a mouse finishes him by turning on an electric razor to trim almost all of his fur.

Victorious - the mice troops finish into a finale of We Did It Before. Their victory is almost marred when the uncooperative grey mouse cuts in, attempting to claim partial credit: "We dood it!" (quoting Red Skelton). In response to his starting of a war; the mice throw a piece of cheese at him.

Although it might be a tad dated with its patriotic overtones and it's allegorical message - its satire depicting the cat-and-mouse routine shows it remains an all-round creative, prescient effort. The characterisations of the cat and the grey mouse are convincingly portrayed that the dictatorship satire can go almost unnoticed by a modern or younger viewer. To some extent, the short is a throwback to the earlier Warner Bros. shorts of the 1930s; like Bingo Crosbyana or A Sunbonnet Blue where a group of allied small animals work together to defeat a bigger foe. Except in the case of Fifth-Column Mouse, the short has tempo and magnetism that the source material can be reworked to fit with a new audience compared to a decade earlier. 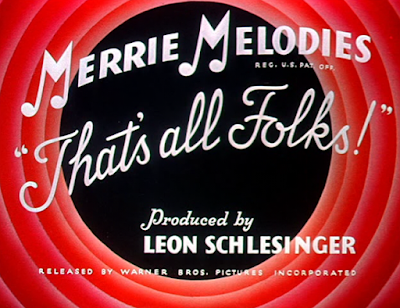