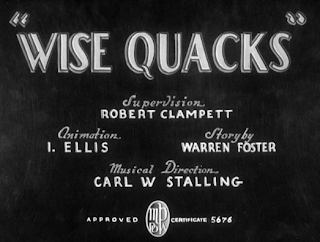 As noticed in this cartoon; Clampett has already given Daffy Duck a new look. Notice how he appears to have shades that are spread around his eyes, and even the ring collar on his neck is still zig-zagged (though he used it already). He would only use that design twice; again in Porky's Last Stand. I can only assume the remake of Daffy wasn't popular amongst Clampett's peers and the audience that his usual design was brought back. Also the first cartoon where you see Daffy Duck is a married man, which of course -- has been used for story ideas from time to time. 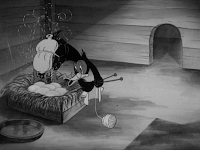 The cartoon begins as we find a barn which belongs to the residence of Mr. and Mrs. Daffy Duck. We find Mrs. Duck who is seen quacking happily towards Rock-a-Bye Baby and is also knitting a shirt for her ducklings that are yet-to-be-born. Mrs. Duck looks over her nest to see if they're ready but no luck yet. I would imagine Bob Clampett himself is providing the quacking sounds of Daffy's wife there. 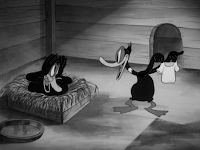 Daffy Duck walks into the scene and his wife hides the shirt, and Daffy is already very suspicious of what she is hiding. She blushes, and doesn't want to show the finished shirt towards him.

Daffy gets his hand out and gestures 'Lemme look'. She then finally hands over the shirt which Daffy looks at with satisfaction. Afterwards, Daffy then jumps with excitement over the fact of having children. In the next sequence - a newspaper headlines reads in the local paper (Barnyard Bulletin): Mr. and Mrs. Daffy Duck Are Expecting a Blessed Event. At the bottom, the journalist is rather personal and remarks: isn't that ducky? Which is just one of Clampett's silly puns. Note the journalist of the Barnyard Bulletin is Jimmy Piddler (parody of columnist Jimmy Fiddler).

It turns out the newspaper shot is a POV shot as Porky's eyes close-in on the newspaper article, as well as the camera. He then speaks enthusiastically: 'Daffy Duck's expecting a baby?!' He continues on: 'Gee, my ol'pal Daffy a father. I can hardly believe it', and then the whole Porky dialogue scene gets really tedious as you feel as though - you get the point. Luckily the dog expresses it sarcastically, 'Amazing' which is how I would feel.

The next sequence we find a pacing Daffy Duck who is pacing up and down waiting impatiently for his ducklings to be hatched. While he paces up and down he takes a swig of corn juice (which is urbanly just liquor that has corn in it). He continues to pace up and down and still keep taking corn juice, which becomes his quirk. 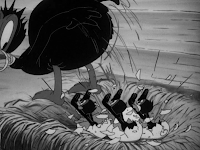 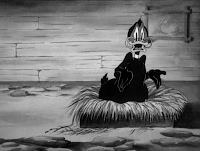 The lack of lip-sync in his scene shows its Bobe Cannon's animation. The next sequence we find a really impatient and worried Mrs. Daffy Duck who is getting very paranoid because her ducklings should already have been hatched by now.

Love the little subtle animation where she breaks the forth wall and shrugs. She walks over to the fireplace to warm her behind, and just at that moment: the ducklings immediately and finally hatch: 'Don't do it! We'll come out' - the delivery and gag itself is very amusing.   The ducklings then sweat with relief.

Porky walks over to pay a visit to see Daffy Duck's new ducklings. He stutters and sings: Rock-a-Bye Baby whilst on the way. Porky finds Daffy and congratulates him on the birth. He sees Daffy as intoxicated, and Daffy immediately hushes him as he's feeling weary. 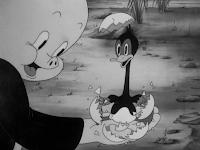 Mrs. Daffy Duck and her ducklings all walk out of the barn as they show they're gratitude in their characteristic walk. However, one other egg hasn't yet been hatched and so Porky picks up the unhatched egg.

He stutters and gasps, 'Uh-oh - here's one that didn't hatch'. He holds the egg that sits on the palm of his hand, and the egg immediately hatches. The timing of the top part of the egg flipping continuously feels a little unreal whilst the cracking of the egg looked real. Porky looks at the duckling, and of course...Clampett makes the baby duck look all cutesy with the baby duck giggle and even character designs that we're supposed to feel awe. Porky stutters and giggles, 'I bet you think I'm your papa'. The duckling nods but then responds 'Uh-uh' which shows the jokes on Porky.

Daffy is still feeling drunk, and so Mrs. Daffy Duck appears and smells Daffy and quacks; 'Have you been drinking?' Daffy then overreacts and exaggerates, 'Me drinking?' as though it never happened. Really funny when he just impulsively responds, 'Yes', and she whacks him with her rolling pin.

Meanwhile up in the sky is a passing-by eagle. The eagle looks down (in a bird's eye shot) and already the duckling is a victim. The eagle flies down and entices him: 'Hiya bud! Wanna go for a ride?'. The duckling nods but responds 'Yeah' and of course; it so appears the duckling's mind hasn't been developed. 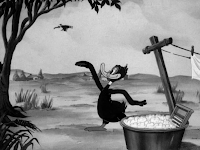 Meanwhile as Mrs. Daffy Duck is seen doing the washing with a washboard; the duckling is seen on top of the eagle waving goodbye to his mother. Mrs. Daffy Duck hears it, and then waves goodbye back....Wait, hang on a minute; HOW did Mrs. Duck manage to HEAR when the eagle was at a CLEAR DISTANCE and yet the duckling's voice was so quiet.

I mean, how is that possible; does she have a super sensitive hearing aid stuck inside her ear or something?? Anyhow, she makes a take and ends up in a panic-attack because of her son in peril. She spreads the news towards Porky and Daffy. 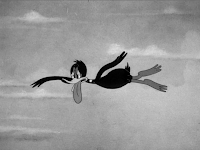 Daffy gets up and shouts with courage, 'I'll save 'em!' He flies up but flies back to take a shot from his corn juice jug. Then he whoops with excitement and flies frantically after the eagle. Also some nice cycle animation of the eagle flying away.

Probably one of the highlights of the cartoon itself is where Daffy is just speeding continuously and effortlessly, but then he pauses and just puffs exhausted -- stopping the action. Then afterwards he continues the chase scenes. That is also a trademark that has been used in later cartoons which is an example of the wildness the Warner cartoons had.

Daffy continues to speed very hastily, and is already in the front of the eagle. He grabs out his whistle and blows to pause the chase. I believe this is also a Bobe Cannon scene, too. Daffy is all drunk, and spits out: 'What's the big idea? Where ya goin' with that kid' and keeps hiccuping the word 'kid'. 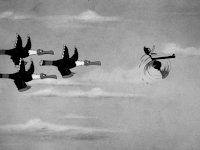 The eagle whistles for the other eagles in their cave, where its a bunch of eagles all chasing after Daffy. Daffy takes the duckling out of the eagle's hand and then whoops out of the scene very excitedly.

The eagle in front is charging up towards him, and then rugby tackles him, with the duckling falling to his death. Rather wacky of Clampett to have him Daffy being rugby-tackled in mid-air and yet standing on air. The mother duck and Porky both watch the baby duckling falling, and yet she panics with fear. What is the real need of panicking, why can't she just contribute something and save the damn bird. But no, it turns out Porky has to do it as the mother is just too useless to do anything. 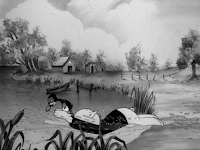 Porky runs at the scene and manages to catch the duckling which lands safely in his hands. Porky skids in the ground and then lands in the lake where the duckling is now absolutely safe. The duckling is already on top of Porky's head where water falls out of his ears, and the duckling titters.

Meanwhile Daffy is still running away frantically from the charging eagles, and makes a land back to the barn and tries to protect himself inside. He looks at the eagles charging towards him who all dash inside the barn, with one standing outside and flips a coin loitering.

Meanwhile at the scene - Mrs. Duck is seen still screaming at Porky in saving Daffy Duck as he is caught inside a barn full of massacre-eating eagles. Porky grabs out a club so he could save Daffy and bash the eagles. Porky enters the barn and asks Mrs. Duck 'Stop pushing me'. 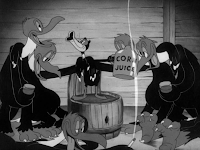 Porky walks inside the barn, and much towards his surprise - he finds that Daffy Duck has already had his way of dealing with the eagles. He got them intoxicated with corn juice, and has managed to save his skin that way. They are all intoxicated and all sing together How Dry I Am - a similar gag which Chuck Jones used earlier in Naughty But Mice.

As Daffy then sings his solo part of the song - he spots the shadow of his wife. Instead of hitting him on the head - she hits the bottle of corn juice which will prevent him from getting drunk anymore. 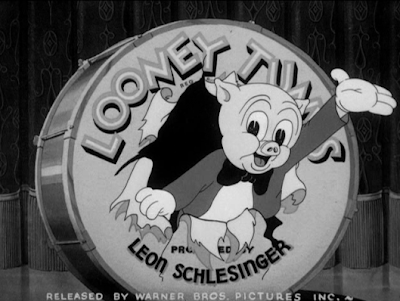 Overall comments: Daffy Duck plays a much bigger role in this cartoon than Porky was; and you can certainly feel that Clampett was trying to make a cartoon with only Daffy Duck as the lead...but with Porky being the co-star character it was a struggle as he just was only considered a straight-man character. The idea of having Daffy Duck drunk throughout the cartoon certainly adds up to how crazy he is and its also very funny though out the cartoon. The way he had his just deserts with the eagles is also amusing at the end, too. Porky is much of a boring character than he has been most of the 1939 cartoons, and in fact it really doesn't feel like he is in the cartoon, other than being a side character...it would be much better if he weren't included since he doesn't contribute to much, but of course Clampett had no choice.

Nevertheless, the cartoon isn't one of the highlights of 1939 but I'll give credit for some of the funny gags in the cartoon as well as comic timing. The comic timing of Daffy panting whilst chasing the eagle is just top-notch, and no wonder it was used much later on in their funniest era. This is also a cartoon where Daffy isn't really much of a screwball than he was in 1938. Daffy was surely a screwball duck in his earliest cartoons made by Tex Avery and Clampett but in 1939 he appears to have toned down a bit, but the wackiness still remains. The idea for Daffy Duck to be married is also amusing, and the concept has still been used for many other cartoons, but I'd say The Stupid Cupid and His Bitter Half are the most superior.
Posted by Steven Hartley at 09:28