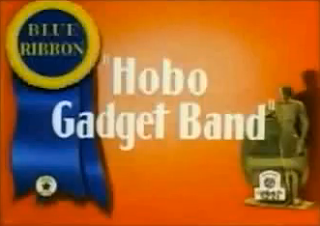 Dick Bickenbach's first animation credit for Warners. who spent there until around 1946 (though credits went until 1947). He had a much more notorious career over at Hanna-Barbera starting off as a layout artist for them at M-G-M and one of the original HB designers who was essential towards the creation of shows like The Flintstones, Yogi Bear, etc. Before that - he started off at Walter Lantz where he already had a few animation credits in 1936.

The cartoon starts off with a rather typical morning sequence that feels rather Disney-esque or other types of cutesy cartoons. A frog is seen in the log looking at the audience before jumping and birds are flying around. A peaceful morning. The horizontal pan continues as we find a sign reading 'Hobo Hotel' with a group of homeless people fast asleep.

It's interesting when studying the cartoon's time period, and even the language change compared to today as 'hobo' is not politically correct towards homeless people these days. But 'hobo' is pretty much a dated, informal slang for a migratory worker, who is pretty much homeless.

We find a homeless person asleep as a woodpecker steps out of the hole of the tree and pecks the supposedly broken alarm-clock. The opening pretty much displays the day of the life of a homeless person. The hobo wakes up, pulls out a window attached to a tree branch for some reason, and then walks over for a shower to rinse off. The woodpecker gag was creative but not so much the window part. The hobo then walks over to turn on the shower spout but there is already a lack of water. He uses the tip of his fingers to wash his face to prepare his day. Sure sucks when you have a lack of water for your water.

The hobo then walks over to the first-aid mirror for a supply of soda fizz. Afterwards we then hear his first dialogue performed by Pinto Colvig in his typical Goofy-esque voice. So, Goofy (I mean) the hobo then grabs out the sodium pill and places it in a glass of water as he remarks: "Just listen to it fizz" which is a dated ad reference to Alka-Seltzer.

The reaction towards the pill that contains sodium is so firm that it releases carbon dioxide on the water which then gives the hobo a fright. Well, I guess the gag wouldn't be funny for those who give a damn about chemical elements, where it wouldn't react as intensely with water - but considering I'm not great at Science, I'm not commenting too much.

A small sequence follows with the hobo's brief antics with the reacting glass of water which has sodium inside. After trying to stop the water from erupting continuously - the water ends up splashing the hobo on top like a fountain before he then falls feeling rather dazed.

A steam train arrives at the scene; which of course is a popular transport where hobos are able to hitchhike - but instead, a hobo picks up a clarinet and begins playing (I think) Kingdom Coming. A chef hobo walks over to prepare fish for breakfast with a live one in a frying pan.

More antics go on such as a hobo cleaning with a washboard, as well as a hair stylist in a barber shop but then accidentally has the hobo's hair out of his hand. Then a chef cook starts to bake some pancakes with a grill. Wanting four pancakes - he manages to squirt the last of the lot on the edge - what would make it a gag when it seemed like enough on there - it just doesn't make sense. Afterwards - the locomotive is steaming through the train tracks with the train engineer blowing on the whistle.

After correcting himself by pronouncing 'San Diego' - the hobos all run over to board the train in the theme of California, Here I Come. As they slide down the slide to enter a boxcar - the last hobo is too late and hits a tank on the train which is some amusing albeit unfortunate timing.

A hobo inside the boxcar of the train uses a handkerchief to fan down and then begins to play the clarinet like we saw earlier on in the cartoon. The clarinet then goes into song of The Old Apple Tree which the hobo dancers then dance to.

There is also some barn dancing going on in the rather dull barn dancing sequence where there isn't really gags going on. However, the train engineer is rather disturbed of the music and stops the train - with some really good effects animation of the tracks halting. The engineer then clicks the 'hobo eliminator' button which the boxcar shakes and reflects the hobos out of the train with the last one swinging a hobo out like a baseball bat which is rather cleverly animated.

After being shakes out the main hobo character of the cartoon (as it appears) then notices a poster on the sign. Some nice subtle timing on that eye-take. The sign reads there are judges looking for amateur musicians in Nosedale which is an advantage for the hobos who have the chance to perform and sing. The main hobo then shouts 'C'mon gang'.

Okay, I swear there has been some error on identity where it appears Pinto Colvig is voicing two hobos here - as I thought the hobo at the introduction was the main leader, but I may be wrong - but appears to voice two characters..which is just confusing as they sound exactly the same.

We then fade in to a radio announcer who announces the conclusion for an amateur hour and announces a gadget band conducted by hobos who have successfully made it onto the show. The song then starts off with a close-up of the hobo leader who is singing Junk Town Gadget Band which is performed through the broadcast.

That close-up is what I suspect is likely a Rod Scribner scene, but only suspect. Pinto Colvig has his own stardom as the hobo lead singer. The lead hobo singer walks over as a group of back-up hobo singers then sing with a group of locals in alternative location shots where they are listening to the broadcasted song. It's rather nicely displayed with different locations recurring to display the popularity.

A group of hobos then walk over as they begin their barn-dance move by getting to particular partners, and such. We follow on with several hobos using some odd objects for instruments (which I guess is meant to be entertainment, right? - even the harmonica bit?). The timing bit for the train tracks dance was rather well timed, but nothing much to comment for. The entire group then finish with the singing after grouping together.

After the whole performance is finished. Mr. Sneer (the broadcaster) then compliments and praises the overall performance by yelling it out as 'colossus, stupendous, etc.' which is similar enough to I.M. Stupendous in Daffy Duck in Hollywood.

He then shakes the hobo leader by the hand and walks out with them to award them a luxurious life and no longer living as hobos. He eagers the hobos as he lists them some luxurious goods such as champagne and ice-cream. Of course; ice-cream was just a treat for the 1930s due to being the Depression era.

After the hobo leader signs the contract with glee - with a funny gag of when he signs with an 'X' mark. They listen out for the train and rush out to catch the train still feeling the life as a hobo. The hobo leader rushes back in to rip the contract and to catch the train. Mr. Sneer walks out of the window to watch the train go by. That's just a rather stupid ending -- why would a group of hobos just go back on the train when they really had an opportunity - gee, how does a gag like that work when they eagerly wanted a better life and just going back on a train being bums again...just stupid. 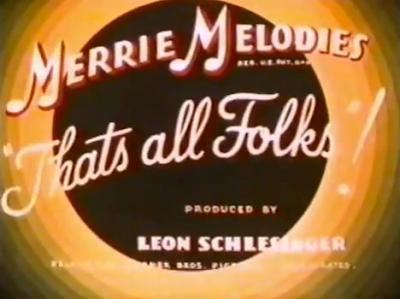 Overall comments: If you consider it - it feels as though Ben Hardaway has reworked the idea of hobo characters from a cartoon he had directed five years earlier: Rhythm in the Bow. Both cartoons aren't great, but this cartoon is a tad superior than the earlier cartoon, but they're both different stories. This cartoon is mostly just a bore. Much like many of the Hardaway/Dalton cartoons that aren't funny. This cartoon just blows through construction as it features really uninteresting and uninspiring musical sequences which still never completely escaped in Warner Bros. where they played popular songs. The cartoon had its hit and miss moments, some of the gags were rather amusing like the timing of the hobo hitting the tank which is certainly an advantage of comic timing - but thats about it.

I'll also give credit to the cartoon for displaying a good use of individual shots of hobos listening, as well the public listening to the song on different locations. Though used many, many times - its always rather decent to see in film. As Pinto Colvig did a fine performance (though using Goofy's voice) - I must say I don't like the way two characters have been identified with the exact same voice. The introduction of the character clearly feels like the character is the main character as we only focus on him waking, and the hobo leader clearly doesn't have an introduction apart from playing the clarinet -- it just leads to confusion, unless this is just one of those many continuity goofs. Having no opinion of the song sequence, it appears to at least striked appeal - especially towards this fellow on YouTube who has sang a cover version of the song which would be worth taking a look at.
Posted by Steven Hartley at 13:55