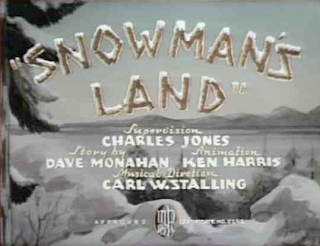 Here Chuck Jones tries out again for a different use of comedy. Here, it just feels like a combination of WB gags, and even Disney. Probably Chuck Jones' answer to Goofy. Cartoon release date: 29th July (my birthday as it happens to be). 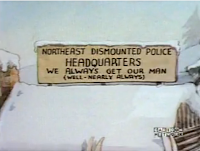 The cartoon already begins with an off-screen chorus who sing Song of the Mounted Police - a popular song written by M.K. Jerome and lyrics by Jack Scholl. During the vertical pan of the North territories of Canada - we find the northwest police headquarters. The motto for their headquarters reads: We Always Get Our Man (Well - Nearly Always).

Okay, I'll say it is rather humorous; at least they're being honest. There is already the line of Mounted police standing in a straight line - they all look the same, minus the goofy mountie...who is already obviously the same lead. 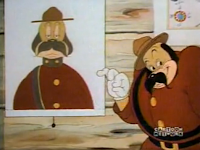 The head mountie finishes writing and reports to his head: 'Gentlemen, we are confronted with a serious situation. The countryside is being terrorised by a vicious outlaw:

Dirty Pierre: the scourge of the north!' In a close up-shot he continues: 'Now here's his picture'. He pulls down a slideshow which turns out to be the picture of himself. I'll admit that is definitely funny as it delivers embarrassment quite well; even the line 'A perfect criminal type' says it all; and even the analysis of the criminal type that implies he has the look of one. Nice sheepish expression of the head mountie when he feels embarrassed. Definitely taken from one of Chuck Jones' character layouts, as well as his expression. Afterwards, he pulls down the blind and analyses the criminal Dirty Pierre. Afterwards, he asks for volunteers to find him.

As much of the soldiers choose not to be volunteered; they all dash out of the headquarters leaving the Goofy mountie left behind. The tornado speed lines around him are pretty decent and syrupy of Chuck. The head mountie walks over to shake his hand: 'That's the spirit I like to see. You're a brave man. I salute you'.

He shakes his hand rather firmly that the Goofy mountie staggers which is some really funny personality animation. He then points him out the door, 'Get your man!'.

Also some nice timing where he tries to salute but ends up having his arm in a bit of a tangle around his body. He walks over to the door to exit. However, he slams straight to the door not realising he hasn't opened the upper half. He opens up the upper half but the lower-half closes and he trips outside. I can imagine Tex or even Clampett make the comic timing much better; but for this idea Chuck's timing is too syrupy, and it just reminds you of what you would expect in a 1930s Goofy cartoon. A local mountie officer walks over to him, and uses his foot to stilt him upwards. The Goofy mountie then regains conscious and chuckles like Goofy. Mmm, definitely Chuck following Disney's style - but at least their style of cartoon humour. 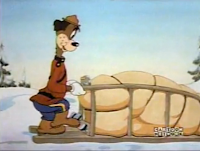 The Goofy Mountie walks over towards his sleigh and on his sleigh there is already a pedal. He uses his foot to push the pedal but already makes an annoying noise. Some nice timing on the dogs that are about to start up riding the sleigh.

Afterwards - the mountie then pulls the choke nob when he tries to get the dogs to start moving. An extended hand then appears and chokes the dog to start moving. Gee, THAT is meant to be HUMOUR?? Jesus Christ, that is so cruel to do that to a dog!

As we pan vertically - we find the suspect caught standing by a tree filing and fiddling with his nails. The Goofy Mountie then walks over which follows a really slow-paced sequence where he asks for Dirty Pierre - and obviously he's talking to him, and not taking notice of the poster.

He responds with a Mexican accent, 'Naw, I've not seen him'. The Goofy Mountie then tries to reassure, and test his patience, and its even testing my patience as the pacing isn't getting anywhere.

The Mountie then looks towards him, and tries to assure him if he looks like a criminal or not. The hand gestures and head-tilts pretty give away its McKimson's animation as he tilts and sways the head as well. The Goofy Mountie then reassures once more. Dirty Pierre screams in his ear: 'YES' and bashes him to the ground and walks back to his cabin. The Goofy Mountie steps out with a body of a snowman. He wriggles the snow off man and walks over. Man, that wriggling scene looks completely unrealistic.

The Goofy Mountie charges over towards the cabin and shouts, 'Come out or I'll break the door down'. In close-up, remarks: 'And I will, too' and at least that's Chuck showing influence from Tex. The Goofy Mountie makes a complete backup, and then starts to wind his legs where they appear to spin like a wheel and he zips straight forward and crashes the cabin where it all falls apart.

The Goofy mountie is attempting to open up the door but struggles to open the door, and so asks Dirty Pierre to help him open up the door. Despite being slow-paced; you must agree its nice to see Chuck at least try out comedy, and I love his attempt for wackiness and incoherence in this scene which is rather charming.

He walks over to open the door, and Goofy Mountie walks in and remarks, 'Shucks; there's no-one in there'. Dirty Pierre then remarks, 'Better take another look' and kicks him in the behind. Afterwards; the Goofy Mountie then charges back up and runs straight towards the door. Dirty Pierre opens the door so he can trip once more.

Dirty Pierre has already opened up the door where the Goofy Mountie runs straight through - he trips and ends up forming into a giant snowball. Dirty Pierre laughs at the scene, and boy you have to admit the laugh looks very unrealistic. The giant snowball ends up rolling right back and then Dirty Pierre ends up being caught in the snowball during the lengthy snowball sequence.

The result is the giant snowball crashes the headquarters of the mountie station. The mountie header and the Goofy one both pop out of the snow and the Goofy mountie shouts out, 'Look I got him, I got him!' He pulls out Dirty Pierre alright but is covered up like a snowman.

The mountie header makes a take, afraid and ducks down. The Goofy mountie does the same and also ducks down. Dirty Pierre has the snow shaken off him and he vibrates with the cartoon ending. 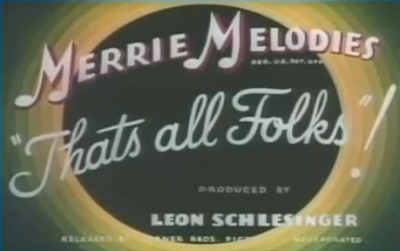 Overall comments: Of course - this is another cartoon (before Chuck entered the funny zone) where he even tried out comedy like the rest of the directors were and already capable of doing. I will admit; there were some gags in the cartoon where of course he was under the influence of the Warner guys, but its mostly Chuck just ripping off accidents and gags that you would expect from a Goofy cartoon. As he had experimented with the Disney style in his early years; you could say he is experimenting with the humour the early Disney cartoons had, other than trying to be cutesy. Much of the comic timing however, proved to be a lackluster for Chuck as much of the cartoon's timing fails to deliver laughs or even amusement for a regular WB fan, perhaps.

But, I'll admit you've got to give Chuck credit for at least trying. Chuck appeared to still be trying out humour, and it's kind of similar towards Daffy Duck and the Dinosaur except its probably the least-Disney-esque cartoon he made in the early era, and the cartoon had much more appeal. I'll admit - watching the cartoon in its first showing; the character designs and even style of the cartoon real did not strike to me as a Chuck Jones cartoons. There were character layout drawings in some of the scenes that clearly indicate its Chuck's style but much of the time - it really feels like I'm watching a style. The only thing which is evident is Chuck's sense of slow timing with gave it away. My theory is the character designs were designed by Charlie Thorson (who likely did the designs) and Chuck followed his designs which were adapted towards his character layouts. Nevertheless, if this cartoon is really one of his earliest for trying out humour (and appeared to never got credit for it) then the cartoon obviously never got enough exposure of the time it was released.
Posted by Steven Hartley at 16:52