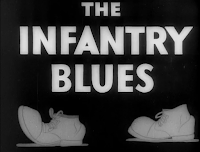 Synopsis: As Private Snafu complains about being assigned to infantry. With help from the Technical Fairy, Snafu's new duties such as fleet or tank duty turn out to have different kinds of challenges. 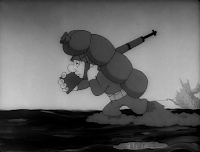 Grumbling and complaining about his war duties - wasn't it a one time formula on Gripes or The Goldbrick? Quite the contrary. One of Private Snafu's characteristic traits involves dissatisfaction and little understanding of the importance of duty - especially in a time of war. As mentioned beforehand, Snafu is a key example of not only showing incompetence whenever training or in combat; but also his lack of understanding on the army. 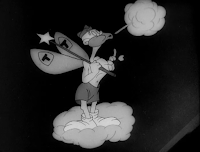 The Infantry Blues is another Snafu cartoon that's part of the assembly line on griping Snafu shorts. Snafu expresses desire for change - with the Technical Fairy to respond to his wishes. Snafu experiences his impractical fantasy that eventually leads to disaster.

This short, on the other hand takes a slightly different turn on Snafu's mistakes that becomes a nice change for the Snafu series. Chuck Jones has the highest output for Snafu cartoon than any other Warners director and yet he provides his versatility in this Snafu short alongside his regular Warner Bros. work. 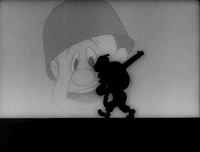 In my previous review on The Goldbrick, I spoke very highly of Frank Tashlin's understanding of shot composition and colour. Chuck Jones' dynamic ideas on Snafu's opening exposition are on par with Tashlin's creativity. For example, the opening shot of an assembly line of soldiers marching features strong silhouette. The silhouette of Snafu struggling behind, reads clearly by contrasting fit soldiers against sleazy Snafu. 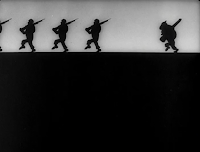 The camera trucks in on Snafu's slumpy walk - followed by a double-exposed shadow of Snafu's enlarged face, expressing resent towards his physical duties. Not only is the layout compelling in visual style; but it's an unorthodox portrayal of expressing emotion and melancholy in Snafu. 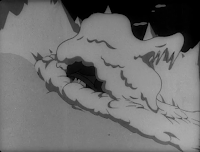 Theodore Geisel's use of wit and rhyme works alongside his frustrations as said: "Oh, the air force gets the glory an' the Navy gets the cheers. /  But all the dogface ever gets is mud behind ears."

Snafu's complaints are dragged out in an entertaining montage of the private's journey travelling through walls of snow, and treacherous jungles. In one gag, Snafu walks past a steep river, but comes out inside a crocodile's belly. While the gag itself has been used several times in animated shorts (Major Lied Till Dawn comes to mind); it's a funny portrayal on the burden Snafu has to suffer from being "dogface" - a military slang for a U.S. foot soldier during World War II. Although Snafu has griped previously on duty - he complaining about the disdain he feels about infantry; in contrast to the navy or the air force; which he sees as more honourable positions. 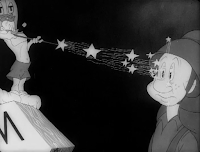 Once Snafu discovers that the nearest rest room happens to be a 18,000 mile trek - Snafu immediately expresses desire to change his army duties to the tank corp. Why would Snafu wait another 18,000 mile while he has an opportunity to use an empty pathway as a toilet? Perhaps Snafu's too stupid to think that way.

So, the Technical Fairy appears and answers to Snafu's wish to switch corps. The Fairy's incantation is a pretty amusing parody of the Sold American jingle, which finishes with: "Sold to the tank corp." The fairy shouts out the spell each time Snafu wishes to change corps throughout the short. It also works as a nice little personal touch from the Schlesinger studio.

Snafu's first exposure with the tank corps allows Chuck the opportunity to go broad with his comic timing and posing. To start off, Snafu expresses satisfaction of his tank riding through a smooth trail. Unbeknownst to Snafu, the tank jumps across treachery rocks causing him to bump vigorously inside the tank. 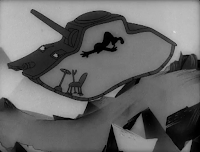 A close-up of Snafu reveals his eyes jumping all over the upper half of face - which is surprisingly very broad of Chuck Jones. The gag is then topped with more hilariously executed bumping action on Snafu. 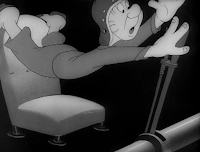 It's an example on how Chuck had improved so much in achieving better comedy, and showing the ability to explore broader gags. I can't imagine him allowing a shot like that pass in a lavish Sniffles cartoon, only a few years earlier.

The military tank shots are wonderfully executed too, not just in timing but in animated form. Animating vehicles is a challenge; but to see squash and stretch applies to the tank skidding to the edge of a cliff, and balancing perilously at the edge creates a beautiful result. The layout work of Snafu climbing out of the cannon, and hopelessly holding onto the edge is great in capturing perspective. Unimpressed by the dangerous duties of the tank corp, the Technical Fairy arrives to reassign Snafu to the navy. 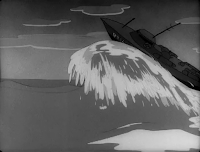 Once again - Snafu expresses further satisfaction towards the navy, as said: "Heave ho, me hearties - you're home for the open sea / This is twice as easy as the poor old infantry." And so, Snafu underestimates the burden of being a navy sailor. War-time threats for the navy like Kamikaze pilots or torpedo submarines are deliberately left out - while the perilous aspects are focused on nature. 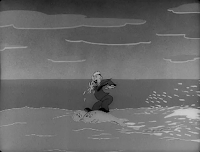 Snafu experiences another bumpy ride as his vessel skimps across choppy waves. This leads to Snafu being washed out of the ship, and water-skiing by standing on a pair of fish. The sequence largely consists of effects animation, which is more ambitious than character animation. The effects work such as water, are effective enough to enhance the dangers of naval services.

Dr. Seuss cleverly inserts a pun of Snafu shouting, "Give me air!", after coughing up sea water - once again dismissing the notion of working in the navy. At the arrival of the Technical Fairy - Snafu is once again reassigned to the air corp. 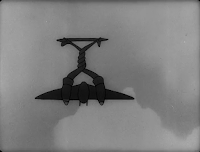 Based on his previous discomfort with the tank corp and the navy; Snafu establishes his own comfort flying an airplane - which he considers "the softest job of all." However, Snafu's incompetence makes the air corp a very difficult for him. He drives the plane  with great speed - to the point where he travels above Earth, beyond his control. 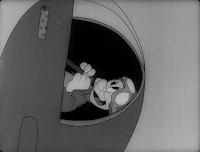 The sequence calls for some daring layout work, such as the use of vertical pans as well as a close-up of Snafu's plane turning upside down. Jones' use of fast-cutting also works effectively in creating the atmosphere of fear from Snafu's perspective.

Like the tank gag; Chuck's unit effortlessly pull of animated gags such as the plane twisting into knots, and unwinding itself. Snafu's plane leads him to fall back to Earth, and crashing onto the summit of a pointy mountain. Snafu falls off his damaged aircraft, and lands right back to where he was originally: a 18'000 mile restroom sign. 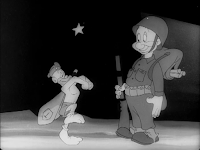 With the return of the Technical Fairy; Snafu has a change of opinion, and he reforms back into his infantry duty. Snafu's morale has proven that all wartime services have their own difficulties - however different they may be. And so, Snafu happily marches on; marching with pride to the service he feels fit for.

While we're used to watching Snafu end up in tragedy from his mistakes; this is a rare occurrence of Snafu learning from his errors without proving fatal. The short ends on a more light-hearted approach compared to the dark comedy that's set around the Snafu series - which is a nice change. It's one of a few occurrences where a light-hearted ending in a Snafu cartoon is actually called for.

The Infantry Blues is not only built on a solid morale; but it's also a clear presentation on how each military service having their own individual hardships. Snafu experiences each perils; and is given the chance to change his mind before it's too late. Not only does Chuck Jones pull it off comedically; but also ambitiously. The perils and hazards are done justice through inventive layouts, and Jones' timing. It's still astounding to see how Chuck could still produce high quality material, despite the Snafu shorts being extra credit to their schedule.
Posted by Steven Hartley at 17:53