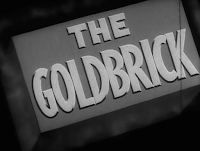 Synopsis: Fed up of his daily routine - a fairy appears and encourages Snafu to goldbrick from his duties.

Like Gripes, this short is based primarily on the importance on army duties. While Snafu previously griped about army training by wishing to change the system - here, his desires are to simply avoid his duties lazily. Snafu is a solid representation of army soldiers who don't fully understand the purpose of war duties - making him homesick of comfort and luxury. 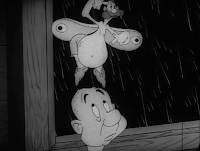 The short's opening scene briskly but clearly represents his loathing for duties. The scene opens with a peaceful Snafu snoring away in his bed - complete with a visual gag of Snafu's snores blowing up a pinup poster of a woman's dress, revealing her blouse. An unseen cadet blows his bugle into Snafu's ear - awakening him with force and disturbance.

Awake, Snafu complains "Another day, nuts! If I could only get out of drill." At this moment, a drill fairy puffs into appearance, but bears a chunkier resemblance of the Technical Fairy. The fairy introduces himself as Goldie the Goldbrick, with visual puns to show he has a "heart of gold" (made of 14 karats), and a "backside of lead". Could you trust a fairy whose body is made up of chemical elements? 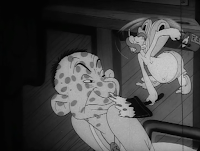 Goldie then entices Snafu to goldbrick, in a song sequence that parodies the song, Tit Willow, from the Gilbert and Sullivan opera The Mikado. It's fascinating to see how Carl Stalling could apply different ranges of musical songs into the Snafu cartoons, that was otherwise not featured in his Warner Bros. cartoon scores. 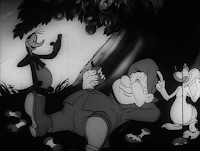 The parody lyrics, possibly written by Theodore Geisel, are witty with a lazy-like quality that could easily get Snafu in the mood. 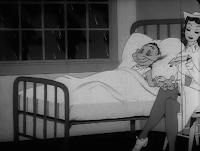 The song follows into a montage sequence that supposedly benefits the possibility of goldbricking - such as laying in a sick bay, or finding a stooge to carry out Snafu's duties for him.

Frank Tashlin uses the montage effectively with his great use of mise en scene and composition, as seen at the sick bay scene. The scene features a silhouette of army recruits marching in a rainstorm, underneath a macabre atmosphere. The camera trucks back to reveal a comfortable Snafu lying in bed, as he's cared for by an attractive nurse. It's a great use o pathetic fallacy set outside in comparison to a more homely, warm hospital bay - achieved by innovative layout work and Tashlin's great judgement in directing. 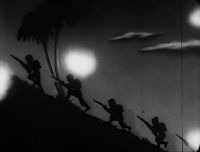 Once Snafu is ready for combat - time passes by where he is fighting in a Southern Pacific island. Frank Tashlin's cinematic touches fit appropriately with this sequence. For cartoon animation, he's very daring by experimenting lighting and composition. It's also clear that Tashlin takes inspiration from film-noir movies that took the Hollywood industry by storm in the early 1940s, utilising such styles of the genre like low-key lighting. 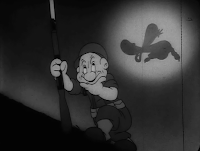 In several long-shots, soldiers are seen running up a hill, whilst exploding gun shots and explosives in their way - all achieved in silhouette. It's fascinating to see how Frank Tashlin (as well as the other directors at Schlesinger) were still at the top of their game - even when they had to work extra on Snafu cartoons to fit into the studio's curriculum and schedule.

Tashlin's unit also apply the stark contrasts of black-and-white very intelligently and subtly. In a scene of a tired Snafu climbing the hill, Goldie reappears in silhouetted form but within a luminous glow.

He further reminds Snafu to goldbrick, while in combat - which is the start of Snafu's undoing. Not only is the use of black-and-white applied appropriately, but a silhouetted appearance of Goldie also calls for visual appeal. And so, Snafu decides to goldbrick inside an unsuspecting hospital trap; set up by the "honourable" Japanese army. As he bunks on the bed - a hand device marks a cross on Snafu's helmet, which is followed by a mallet that strikes Snafu's helmet down to his waddling feet. And so, Snafu is ambushed by an incoming Japanese tank, adorned by the Rising Sun symbol. In an attempt to save himself by digging up a trench; Goldie reappears and corrupts his mind by goldbricking on the digging, to only "dig a few inches and crawl in and sleep." Goldie's ideas of slack grows hilariously absurd throughout the cartoon, to the point where digging a trench for defence doesn't require effort whatsoever. 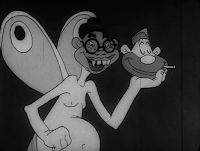 After only a digging a few inches and falling asleep, Snafu's rear end is still sticking about; noticeable enough for a Japanese tank to ruthlessly crush it to his death. Tashlin's timing and visual presentation of Snafu's death is innovative, by portraying a cloud of dust that unveils to reveal Snafu's grave. 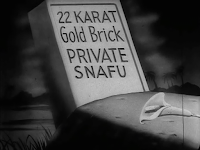 Goldie appears atop of Snafu's tombstone. He removes his mask, revealing himself to be a caricatured Tojo in disguise. In his finishing words, he sings: "Here lies the goldbrick / I now go find more. If find enough goldbrick / Japan could win war!".

For a cartoon ending that's built on morales - it's entirely built around dark comedy. Snafu's mistakes is so severe, that he doesn't get the chance to learn from it; making the overall ending morale rather biting in context. It's a nice little use of irony from an American perspective to present a Japanese victory in a derogatory fashion. I'm sure the army recruits had second thoughts on goldbricking upon seeing this Snafu short.

In comparison to Snafu's Gripes, the short is an articulately funny portrayal on an army soldier's desire for comfort. Desire is crucial for an individual aiming for something, but Snafu is after the wrong desires. The Snafu cartoons are not only brilliant in providing sharp lessons to recruits via comic timing and adult humour, but they also excellently (and exaggeratedly) portray the worst consequences possible. This cartoon is a prime example of that. The cartoon's ending represents the utmost liberties the Schlesinger studio had from studio censors. Not only is the dark comedy used so savagely, but I'm sure Production Code censors would've heavily frowned upon on a Japanese victory - that's only applied as a potential threat if army recruits try to go the same way as Snafu.
Posted by Steven Hartley at 19:06