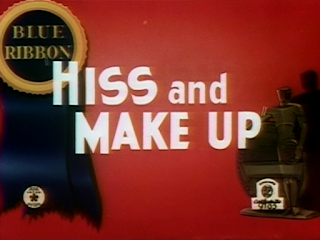 I apologise for becoming neglectful to this blog lately. This year has been my busiest so far regarding university work, which has led to months of hard-work and distractions. As a treat for Easter Sunday, here is a new review, for an underrated Freleng short: Hiss and Make Up. I've noticed how my output in this blog has been declining, which I intend to improve on - at least a little. 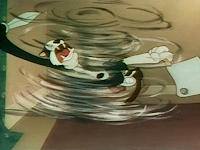 Cat vs. dog/mice/birds routines are a popular genre in classic cartoons. Bill Hanna and Joe Barbera excelled at the formula for the Tom & Jerry series. Michael Maltese was clearly attracted to the formula - as he used it sporadically during his animation career. Maltese always tried to explore innovation within the cliche - by making the stories more character-driven rather than formulaic. 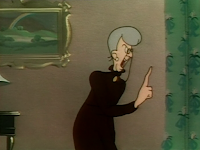 Hiss and Make Up is no exception. The premise is kept straightforward and to the point. The elderly owner of a feuding cat and dog (named Wellington and Roscoe) is fed up of their fighting habits, and threatens to throw one of them outside a snowstorm if they don't "kiss and make up". Intimidated by her warning, the pets attempt to snake each other out - by building traps to frame one another. 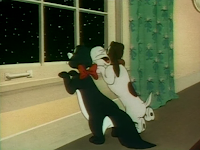 Maltese makes it clear that neither Wellington or Roscoe should be sympathised or rooted for by the audience. Both characters have the same motive, and they're equally bad as each other in terms of low cunning and selfishness.

The elderly woman is a sort of precursor to Granny - a regular character of the Sylvester & Tweety shorts. It's the same voice provided by Bea Benaderet in her first released WB cartoon (based on Keith Scott's research, her first recorded voice going by production order is Little Red Riding Rabbit).

Maltese's develops the characters with realistic personalities to the point where the cartoon already establishes that Wellington and Roscoe will never get along as friends, which is natural. The pair never attempt to patch up their relationship - but instead try to frame each other. Maltese is a master in understanding character psychology, which is left open to a lot of gag opportunities - with Friz Freleng's masterful direction skills to enhance them.

Wellington and Roscoe's relationship could easily be summed up in one scene of the elderly lady forcing the pets to "kiss and make up". The pair are immediately hesitant, but begrudgingly kiss by their owner's orders. Immediately after kissing each other, they spit out in disgust. Gerry Chiniquy's posing and facial expressions perfectly captures the essence of hatred and spite the pets have for each other.

Character animation provides great clarity in an earlier sequence of the pets slowly restoring their conflict. As the elderly woman is sewing and singing Carolina in the Morning, Roscoe the dog makes his first move by carefully sliding Wellington's tail towards the leg of the rocking chair. Wellington yells in pain on impact, which startles the owner. She immediately suspects Roscoe, attempting to look innocent.

In the following scene - Wellington is craving for retribution. Every angst in his expression is wonderfully portrayed through the animator's hands. And so, Wellington produces fly noises through his mouth, without making it obvious. He looks at imaginary fly supposedly landing on Roscoe - and then smacks him with a flyswatter.

It's a wonderfully rich piece of character animation which is reliant on pantomime. Every expression reads and shows clarity in Wellington's motive and hunger for vengeance. The pantomime is extended further, when the elderly lady watches Wellington beating Roscoe. In a desperate attempt to look innocent; Wellington picks up the imaginary fly from Roscoe's head and acts disgusted by its 'remains'.

Friz Freleng's masterful timing comes into play since the opening scene of the cartoon, featuring Wellington and Roscoe fighting in the lounge. Freleng applies an elaborate drybrush effect featuring only the cat and dog's face very briefly throughout the cartoon action. The scurry effect works well to add emphasis of the pets' fighting nature.

Freleng's ability to time cartoon action into music is used to its finest advantage in a sequence of Wellington stamping paw prints around the house. He uses a flowerpot to stamp the soil, which he prints around the room - all timed towards Raymond Scott's Powerhouse.

The Scott piece had exploded into a popular music cue around the cartoon's production time, and Friz knew how to execute it well. The effect is given the extra touch through Treg Brown's timing with sound. It's a beautifully timed piece accomplished through the work of several departments around the Schlesinger studio. It's far from economical.

Michael Maltese's expert use of gag buildups is embellished in the sequence of Roscoe planting mechanical mice toys around the kitchen as bait to set up Wellington. Upon Wellington's arrival, Roscoe bangs loudly on a frying pan - leaving the cat on a chasing spree of the mechanical mice; as the owner is disturbed from her slumber.

Wellington rapidly places the mechanical mice into a bundle, and sits on top of them prior to the elderly woman's arrival. Maltese only builds the gag after the impact, making the payoff more unpredictable and hilarious in execution. As the owner pets Wellington, the mechanical mice zip through the kitchen, with the cat sitting on them - leading him down to the basement.

Another sequence with a great gag setup is the "mad dog" sequence. Mad dog, at the time, being a colloquial term for rabies. In order to find an excuse to kick Roscoe out of the house, Wellington sets up Roscoe by rapidly planting shaving foam all over his face; which is masqueraded as rabies.

The elderly owner shrieks "Mad dog" in panic, and starts beating him with a broomstick all over the house - until he exits through the door. The disease was a common fear by the public during the time period - and the delivery captures the panic convincingly. 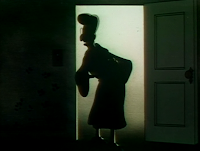 Friz Freleng was always capable of embellishing rich visuals whenever it was called for, like in the blackout gag. In a sequence of Roscoe attempting to clean up the paw prints; he hears the sound of his owner coming down the stairs. In a desperate attempt to hide the evidence - he turns out the lights and runs outside to look through the window.

The shot of the elderly owner opening the door in darkness is beautiful in colour and atmosphere. The light highlights around her is rather meticulous in creating effective lighting from the hallway in the background. As she turns on the lights, Roscoe shouts "Hey, put out that light!" - disguised as an air warden. 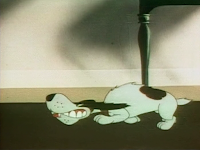 The gag might be wartime related; but it's an excellent showcase of Friz's unsung abilities as a director - asides from his comic timing.

Freleng's strong point of view as a cartoon director can never lose the audience's attention to the story. In a scene of Roscoe about to pounce on Wellington, Freleng uses intercutting of the sleeping Wellington and the approaching Roscoe.

The suspense builds each time Roscoe moves at a brisker pace. Carl Stalling's expert ability to apply music into animated action helps achieve such result. And so, the scene cuts to Wellington awakened by Roscoe's intrusion with the fight beginning. Not only does the effect work great in suspense; but it's a great showcase on Friz's attempt to continue innovating his craft, by keeping up with the trends of other Warner Bros. cartoons, like Frank Tashlin.

Mike Maltese goes his way of not writing a conventional cat-and-dog feud short. One result is the presence of a canary; who would later play an important role in the cartoon. The canary is first seen as an observant of Wellington and Roscoe's recklessness, and is given the burden of dodging incoming pieces of china passing by its cage.

At one point, the canary is used as bait by Roscoe to set up Wellington. He places a couple of the bird's feathers in Wellington's mouth; to deceive the elderly owner - and trapping the canary inside a jar; only to foil Roscoe's plan by whistling its presence to the owner.

Once the feud continues to escalate; the canary becomes a nervous wreck. The expressions of the canary undergoing its own breakdown is priceless; and only to be topped as he swallows an aspirin pill.

The canary's role becomes prominent as he begins framing Roscoe and Wellington, by deliberately destroying furniture items and wrecking the room. At this point in Warner history, it's unusual to have animated cartoons seen through the perspective of background characters. It adds more depth and dimension into a typical cartoon formula, which is excelled here. Michael Maltese would use the plot device several times later (like Roughly Squeaking).

Once Wellington and Roscoe realise they're being set up by a destructive canary; they ally together to attack the canary. Caught by their house owner, the pets are tossed outside in the snow. Roscoe observes Wellington smiling, which not only confuses him, but the viewer, too. This motivates Roscoe to speak his only line in the cartoon: "How can you sit there and smile when we're out here in the cold, and that double-crossing canary's in there!".

The cat nods in disagreement to the latter part of Roscoe's dialogue, and reveals the canary trapped inside the cat's sharp teeth - in the style of prison bars. Whoever animated the close-up shows a great understanding of staging and visual clarity for the payoff gag.

Maltese's ending presents a good case on how justice is brought to every character. Roscoe and Wellington, both as bad as each other, are punished equally as they're left to freeze in the night. The canary, who snaked the pets, is brought to justice when Wellington has the last laugh.

For an overlooked cartoon of Friz Freleng, it's an innovative take on the cat and dog formula. Michael Maltese creates an interesting perspective that makes the cartoon less conventional and more compelling - such as the canary plot device. His characters are established well enough to devise gags that will keep the audience focused throughout the cartoon. Friz never fails to fall behind on keeping up with the growing standards of the Schlesinger plant. Not only does he excel in executing comic timing, but he keeps the short visually appealing - such as the use of fast-cutting and beautiful staging. Overall, it's a solid one-shot cartoon that holds as a beacon for Freleng and Maltese's growing reputation within the studio. 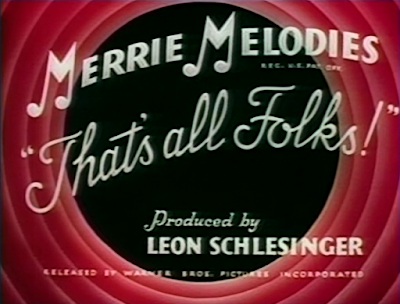