After two years of a handful of Bugs Bunny/Elmer Fudd cartoons, Friz Freleng and Michael Maltese collaborate together, and intend to take it to a different direction. The opening shot of Elmer reading a book indicates that Elmer has failed many times to capture Bugs Bunny, and this time he is going for a psychological approach.

Whilst reading and walking along the forest, he researches some in-depth information about self-hypnotism. He finds an opportune moment once he encounters an endangered bear. The bear traps Elmer to the ground with his foot, in which Elmer remarks: "Now's my chance to twy ouwt my psychowogical expewiment!".

Elmer uses the experiment and causes the bear to go into a trance. Elmer gains control as he commands the bear, "You are in my power. You are swowly going into a twance. You are gettin sweepy, sweepy, sweepy..", and hypnotises the bear.

Michael Maltese has the sequence start as an introduction to indicate that Elmer was successful at performing hypnosis, therefore creating a nail-biting moment as the practice could be seen as a potential threat to Bugs Bunny.

Elmer's command creates a hysterical moment. Of the power Elmer had with self-hypnosis, he commands the bear to act like a canary bird. The bear begins to fly and picks up the mannerisms of a canary. The scene itself is very surreal gag-wise - but it's otherwise a very creatively conceived gags that lives up to Maltese's reputation as a genius writer and gagman.

The effect also applies to Elmer Fudd, who was hypnotised later by Bugs Bunny himself, and reacts with the same spasms as the bear. If you compare both scenes to the GIFs shown, note how both scenes are timed identically. It's clear Friz only had to time the spasm effect once for each character, and perhaps make a few slight alterations as to how the characters should drop to the ground.

Dick Bickenbach, the animator on both scenes deserves a lot of credit for a lot of solid effort in the early 40s Freleng shorts. The analysis for both scenes are a brilliant example for aspiring animators; as the drop emphasises the contrast of size between those characters. The bear's drop is animated with a heavier weight, which is emphasis through squash and stretch, whereas Elmer's drop is more poised, and less heavy.

By the time Elmer encounters Bugs Bunny, the audience are reassured that nothing Elmer could possibly achieve would be a threat to Bugs Bunny. No matter if the experiment worked on the bear, Bugs won't succumb to the trance. Instead, Bugs cordially mocks Elmer's practice, commenting: "Heh, Dracula."

In an attempt to add suspense to the sequence, Elmer lowers his head towards the hole, where a sleepy Bugs slinks down. Bugs' pose makes his next antic or Elmer's feat unpredictable.

Elmer commands, "You are getting sweepy, you needn't twied to escape, I have you in my cwutches. So come outta there!". And so, Bugs' plan to outwit Elmer works when he raises a baloon with rabbit ears attached to them, leaving Elmer to float up in the sky. Perhaps the best double-take Mike Maltese could conceive for a situation like this, is when the bear appears out of the blue - still acting like a canary. It's a priceless bit of delivery, and the slow build up to the gag is incredible.

Some action scenes that follow make up for some excellent piece of comic timing and gags by the masters. Elmer falls from the sky, and Bugs carries out a basket for him to land safely. The weight and timing of Elmer's fall is incredibly rapid he shoots straight through the basket - creating a hole in the ground. It's a funny piece of exaggeration that makes the crash look physically pain.

Gerry Chiniquy, an animator who has a reputation of animating in a not-so fluid style but is very precise at capturing Freleng's timing to the best standard. The shot of Elmer attempting to pull the gun from the hole, but resulting in a tug of war battle with Bugs is a fine example.

Chiniquy found a clever method at achieving this. Elmer tugging the gun back and forth is mostly a cycle, and the motion itself is very jerky, especially when he hits the accents - but it is all for an animated effect. The sharp accents of Elmer being pulled creates a very convincing force which adds to the struggle.

The screen grab featuring Elmer in out of Bugs' hole at the same time, shows how crafty Chiniquy was in capturing Freleng's timing. Not only is it a sharp effect but it requires less inbetweens that way. The gag is carried out further to the point where they challenges the laws of physics. It's a popular trait of animated cartoons, but this one shows ambiguity. If Bugs and Elmer are both holding the gun - but who is pulling it back into the hole? Subtlety and incoherency is what makes such a gag like this outshine.

Midpoint through the cartoon, Bugs gives in from pranking Elmer and is willing to cooperate. This leads to Elmer's hypnosis experiment backfiring, and he goes into a trance. This creates another dilemma and golden opportunity for its climax. Bugs commands Elmer to act like a rabbit.

After only a handful of Bugs Bunny shorts for two years, both Freleng and Maltese are already poking fun at the Bugs/Elmer formula, by taking the short to a different turn which hadn't been done previously. The personalities of Bugs and Elmer are deliberately role-reversed for a comedic and golden sequence, and it exceeds expectations.

With the mannerisms of Bugs Bunny, Elmer begins to pester him by copying his moves such as kissing him on the lips...much to the annoyance of Bugs. He shouts, "Hey doc, come outta there! You can't do that! Who's the comedian of this picture of this picture anyway!".

The sequence of Bugs pulling the gun back and forth from the hole is a deliberate echo to an earlier sequence. It's a great reprise of a gag to show how Bugs Bunny has become vulnerable. Defying the laws of physics unintentionally, he continues to pull at the rifle while Elmer watches him as he eats a carrot, and using Bugs' catchphrase. It's an excellent climax constructed by Mike Maltese who explores and experiments further with the cartoon formula, and writing those scenes makes Bugs feel more human than what was done beforehand.

If there is a sequence that doesn't quite meet the expectations of Maltese's writing and Freleng's direction - it would be pointed towards the scene of Elmer hiding behind Bugs Bunny. From what was in Maltese's storyboards for the short, this would've led to a potentially hysterical moment in the cartoon. The results were somewhat baffling.

In a medium two shot of Bugs Bunny and Elmer, Bugs is eating his own carrot while he is still confused over Elmer's behaviour. Unknowingly, Elmer tricks him into eating more carrots, which he is carrying; and at one point Bugs is eating three.

It's a difficult gag to pull off in animation, and solid draftsmanship would've been required if the scene was to pull off convincingly. This is a case where Freleng gave the scene to the wrong hands of an animator.

Gil Turner, who animated that short, animates a very unattractive looking Bugs, and the acting is incredibly sloppy and awkward. You'll never find a more conservative and amateurishly drawn Elmer Fudd (unless you count the MUCH later generation - post-1964). It's possible that he was a victim of poor assistant work, but it's a pity as the gag could've worked so much better had it been assigned to a more solid animator, such as the likes of Dick Bickenbach.

While Elmer appears to be unable to defeat, he meets his downfall when he dives down the rabbit hole - confronting an angry Bugs Bunny. Freleng's economical ways of directing is put to great use, especially when an unseen hypnosis effect occurs - making the situation unpredictable and suspenseful.

All that appears is the sparkling effects appearing above the hole, making the action incredibly vague from the eyes of an audience. Once revealed, Elmer Fudd returns to his normal mind, and escapes from the forest in fear of Bugs.

Bugs exclaims, "Hows about that? Thinking he could hypnotise me? Huh!". Maltese deliberately creates a punchline to end the cartoon, which would contradict Bugs' statement. Bugs looks at the time and comments, "I'm due at the airport." Without realising, it turns out Bugs Bunny had been hypnotised into believing he was a Douglas XB-19 experimental aircraft bomber. His final line, "I'm the B-19!" sums up that Elmer finally had the last laugh, except since Bugs isn't aware he's hypnotised - it makes the gag look so subtle, that the gag could easily get overlooked.

In conclusion, The Hare Brained-Hypnotist is one of the finest and most enjoyable Warner Bros. cartoons produced under Leon Schlesinger's management. Since his first appearance in A Wild Hare, and up to this cartoon, it's clear that the Warner staff have become more comfortable in establishing Bugs Bunny's personality, and their confidence is growing with funnier and unique situations for Bugs. Michael Maltese breaks a few boundaries by taking liberties of the typical Bugs/Elmer formula, which after a handful of cartoons, had already become a cliche. Friz Freleng is no amateur when it comes to staging and planning out a sequence, and here he nails almost every gag right down to the frame. The Bugs-Elmer mimic gag is slightly flawed, but that can he ignored as the other sequence perform a lot better. The idea to parody it so soon leaves an amazing legacy of marvellous Bugs Bunny cartoons to come. It's fitting to see that Elmer has returned to his slimmer form, after a few shorts experimented Elmer with a heavier character design. 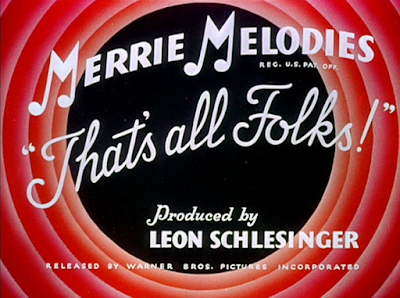