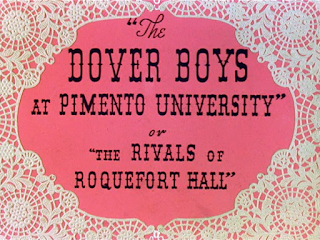 It would seem like blasphemy to ignore the innovative art direction and stylised animation in this cartoon, which is what stands about from the cartoon. An advanced layout artist, John McGrew's beautiful layouts in this cartoon work well in the atmosphere and tone of the short wonderfully. The backgrounds have a very ostentatious look to it, which sets the style and culture of the Gay Nineties well.

Lest not forget the different turn Chuck Jones has made as far as animation styles go. Not only does he depart from the classic Disney formula, but also as far as standard animation formulas go, later on being a prime inspiration for UPA.

His experimentation of capturing  the stiffness of late nineteenth century photographs as well as satirising the mannerisms of the people from that society. It benefits greatly in the limited animation style on the characters. It's somewhat natural that producer Leon Schlesinger was disturbed by the art direction and style of the cartoon, as background artist Gene Fleury recalled in a Michael Barrier interview, "I suppose what really upset him was the fact that the characters were human--not just one or two, but all of them."

On the other hand, it's also a direct parody of the popular book series of the early 19th century, The Rover Boys, by Eddie Stratemeyer (or Arthur M. Winfield), which consisted of three mischevious lads (Tom, Sam and Dick) at military school. Here, the lads are named as a take-on on the phrase "Tom, Dick and Harry", with the latter being called 'Larry', instead.

They're portrayed as the most popular boys at Pimento University, which in abbreviation is known as P.U..resulting in a funny pun. The gag is extended further where an unseen chorus sing about P.U. and its scent in the style of Sweet Genevieve. "A pox on Yale, poo-poo-pa-do" is a funny little line adding to the pompousness of the university. The limited animation cycles of the Dover Boys seen riding in their own individual forms of cycling is quite an achievement for what Chuck's unit pulled off, as each character required certain limitations of movement.

Tom, being a sturdy fellow, required movement for cycling the pedals his feet, whilst keeping his figure stuff, Dick's entrance required very little animation as the big wheel does the action, whilst Dick stands still and only moving to tip his hat. For Larry, he requires the most movement due to his small, stubby appearance.

Admittedly, Dora Standpipe's movements feel a little awkward, but only particularly in her introduction scene where the Dover Boys meet at her female academy. The idea she's "their fiancee" adds to the incoherency and charm of Warners humour.

The movements feel somewhat awkward in the shot of Dora descending down the stairs to join the Dover Boys. The movement feels somewhat more mechanical than it does satirical, and whatever the animation was attempting to achieve: it doesn't feel somewhat right, especially in limited animation.

Dan Backslide's introductory sequence is mostly exposition, set in a stereotypical motive for a comic villain of that time. Known as a "coward, bully, cad and thief". It's without question he is caricatured directly by animator Ken Harris, who has been mercilessly caricatured in many cartoons.

Giving Backslide a green-skinned colour is an excellent combination to his personality, emphasising his green envyness to the Dover Boys, and of course easily identifying him as the villain type. The cloud of smoke on top of the pool table has an unusual yet nicely exaggerated quality to it.

Noticing the Dover Boys escorting Dora Standpipe outside the saloon doors, it's revealed that he has long loved her; only to make a cutting remark that it's because of her "father's money". The sequence is also an excellent showcase for the smear animation which is used extensively.

The smear works brilliantly for elements of Backslide's character that requires that rapid piece of timing, particularly on his remark about Standpipe's wealth. Backslide's memorable dialogue goes as: "Confound those Dover Boys! Oh how I hate them! I hate Tom! I hate Dick! And I hate Larry. They drive me to drink!".

Chuck's pacing is top-notch and comical of Backslide hastily necking down a number of shots poured by the barman. Bobe Cannon's animation of Backslide in this sequence is broadly acted, giving him a stiff posture, which itself is a feat as he has Mel Blanc's effective vocal performance to blend well in animation.

Perhaps the finest use of smear animation in the cartoon is the memorable hide-and-seek sequence, animated superbly by Ken Harris. The Dover Boys and Dora Standpipe engage in a juvenile game of hide-and-seek, where Dora is counting by a tree, while the Dover Boys frantically try to find a hiding spot in all sorts of places.

Hiding in a saloon and noticed by Backslide, he takes his advantage and sets out for Dora: "Then Dora must be alone and unprotected!". Backslide takes the opportunity by carjacking a runabout, and disguising himself, making the Harris caricature more revealing.

The line, "A runabout, I'll steal it. No one will ever know" is certainly a hilariously delivered piece of dialogue, but it feels somewhat ruined as the line alone has become a Internet meme.

Ken's sequence with Backslide noticing Dora counting by a tree, ripping it apart by taking her, features some excellent and a fluid use of smear animation which is less wilder than Cannon's in the saloon sequence. It all amounts to a great gag, where he rips the tree and places it in the car, until he realises the mistake, and returns the tree to its base.

Chuck and Ted Pierce take the opportunity of topping the sequence with one gag after the other, making the scenario loonier if possible, especially when Standpipe doesn't notice Backslide's plan, and carries on counting despite the tree being physically removed from the spot. As Backslide returns to the tree, he grabs a "how to" book on removing ladies from a tree, with a blue plan all coordinated. And so, he extricates Dora into the car, leading up to a damsel in distress sequence.

As Dora is taken captive by Backslide, he drives her towards the mountains in a supposedly deserted hunting lodge. To avoid being so cliched with a "damsel in distress" scene, unpredictable and nutty gags blend in perfectly. As Dora panics by banging on the door, Dan creepily sneaks up behind her.

Out of the blue, Dora picks him up effortlessly and tosses him out of the scene, causing him to crash. This is a great satire of woman's attitudes of that time period, as they were mainly portrayed as meek and passive, whereas Dora can easily challenge Backslide, and yet still cry out in distress.

The recurring line "Help, Tom! Help, Dick! Help, Larry!" (which was spoken by Dora earlier) is nicely parodied as Backslide personally calls for their help, unable to take her beatings.

It gets somewhat wilder during the climax, as everytime Dan tried to creep up behind her, she would kick him with both her legs behind, and even whirl him around before she throws him away. The cries for help are eventually noticed by a group of scouts who hastily travel afar to deliver a telegram to the Dover Boys. Stalling's outstanding ability to choose a musical piece to coincide an action is taken at great advantage, particularly the underscore of "William Tell" sets the action and energy perfectly. Chuck's edgy piece of timing works well in the scout frantically waving the flag at different signals, giving it a jerky look.

Alerted by the telegram, the Dover Boys make the way on their unicycles to rescue Dora Standpipe. The action is wonderfully paused when the Dover Boys abruptly arrive at the front porch of the lodge and sing sentimentally of saving Dora before the burst in.

Typical elements of Warner Bros. humour works well in the scene of Tom yelling "Unhand her, Dan Backslide" at different directions, including a mounted moose head on the wall. And so, he goes into a forth-wall line: "Hey, we're getting in a rut".

The shot of the boys pounding Backslide like a punching bag has a rare drybrush effect which isn't commonly practiced in animation, as the effect itself is remarkable. the trio prepare themselves for Backslide's ultimate defeat.  Tom threatens, "Oh, you haven't  been thrashed enough yet?" with the trio anticipating a strike motion simultaneously and ultimately knock each other out, leaving them unconscious. Therefore, contradicting and parodying the "hero of the picture" formula.

Despite the short featuring an intensive and unique approach to animation, it shouldn't be overlooked at it still has elements of gags used numerous times in a Warner cartoon, particularly in Avery cartoons: like a vague running gag in which the punchline is revealed at the close.

The gag of course, is of a washed-up looking sailor who randomly interrupts a key scene by shuffle jovially in rhythm to While Strolling in the Park One Day. To me, what makes the gag stand out from the cartoon is the animation itself; as it's the only piece of animation that doesn't blend in with the stiff, ostentatious style; especially as it moves very fluidly.

All the more, it adds to the nonsense and classic Warner humour. Since the sailor serves no purpose in the short, the vagueness of the gag is paid off on his behalf, when he escorts Dora away in her arms. Furthermore, Dora also shuffles with the sailor and they continue to do so as the short draws to a finish.

A very celebrated cartoon for its innovative use of background designs by John McGrew as well as a limited animation approach, it's the cartoon where Chuck has gained the confidence of being a established, comedy director with a taste of unique visualisation. The comedy and its execution shouldn't be overlooked as it's been achieved in many groundbreaking ways. Not only a fun parody of The Rover Boys, it's also a great satire on its portrayal of how well-mannered and stiff upper-lip college kids were portrayed in that nineties period. Finally more comfortable with his pacing, his sharp timing is well executed with the extensive use of smear animation which is benefited greatly in the sequence of Backslide kidnapping Dora, and on the other hand: Dan Backslide's opening sequence. In many ways, the gags themselves function much like any Warner humour, particularly the running gag of the sailor which is without doubt inspired from Tex Avery's spot-gag cartoons. All in all, Jones has created a short which is a visual breakthrough in animation, as well as being very entertaining simultaneously. 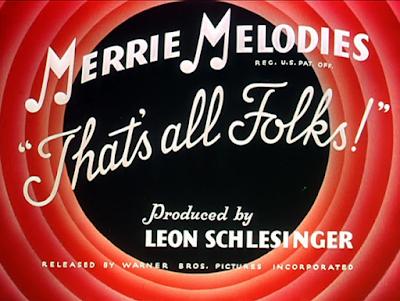