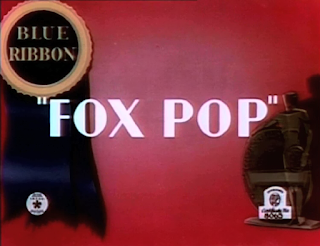 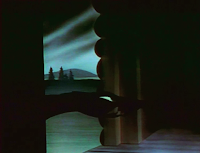 Despite finding a flare for comedy in a couple of his last shorts, he hasn't quite gained complete confidence; which is exactly what resulted in Fox Pop. Since he could go no worse than Bird Came C.O.D. - the short is another experiment of his growing confidence. 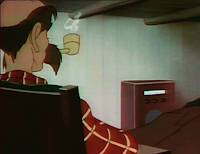 The opening sequence already sets up Chuck Jones' artistic tastes as a director. McGrew's art direction is beautifully staged to create a suspenseful opening. A fox appears from behind the bushes covered in silhouette, as well as surrounded by a bleak atmosphere. 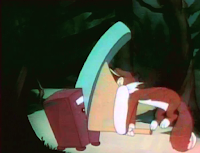 Chuck's sense of staging is a unique approach, and it adds to the suspense beautifully. The scenes cut more rapidly back and forth to the fox sneaking closer towards a cabin, as well as to a rear shot of a resident smoking a pipe. The gag's revealed once the fox's identity is revealed, and a window view shot shows the fox stealing the man's radio set.

This contradicts the atmosphere and pacing of the opening scenes, as well as not giving the fox a threatening image. If The Dover Boys is long-credited for one its earliest uses of "smear animation", this short has used it earlier, but unlike "Dover" it isn't used extensively in the cartoon. It's noticeable in the scene of the fox chopping up the radio set with his pickaxe, leading to two suspicious crows watching him. Asking what's wrong with him, the fox responds rhetorically: "What's bitin' me? What's bitin' me?", and recollects his story: transitioning the plot into a flashback. 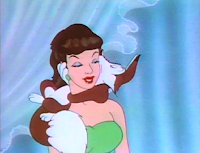 The flashback begins with visual interpretations from the fox, all of them which are cleverly conceived. The scenario begins with the fox looking through some leftover food in the bins, until he eavesdrops to a radio ad for the Sterling Silverfox Farm (a reference to a particular clothing company?) 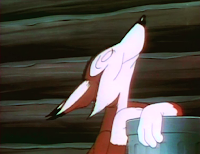 The radio advert announces: "Ladies, this is the year for foxes. Yes, foxes have really come in on their own. Wherever you see smartly dressed people, you'll see foxes this season."

The fox however, misinterprets the message and fantasises the several locations foxes "can be found". He pictures a leash of foxes walking on Fifth Avenue, Hollywood Boulevard, Miami, etc. Likely being either a Mike Maltese or Ted Pierce story, they create some funny visual metaphors that adds to the incoherency of the fox's interpretation. The visual gag is blended in wonderfully when the announcer mentions that women "will insist on having a genuine fox around her neck", with the fox imagining himself literally around a dame's neck. Misunderstood, he willingly sets off for the farm. 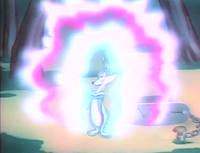 Chuck's great use of visuals as well as his love for visual gags won't go unnoticed in his shorts. A lot of the times they fit the tone of the cartoon. This is particular in the prison break sequence. In an attempt to enter the farm, he disguises himself with luminous silver paint. The luminous in the paint creates a great hyperbole as the fox literally glows strongly when his disguise is revealed. As it was an attempt to create an alarming effect, the colours for the glowing effect feel a little out of place and perhaps a tad bright and overdone. 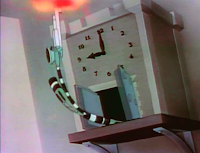 From the farmer's point of view shot, he watches the fox's glowing figure, and envisions himself as an elegant fur coat sitting on a stand. And so, the fox thrown into a prison cell, where many of the other foxes are places, ready to be slaughtered. After a discussion with another fox prisoner, a prison break is due to begin. 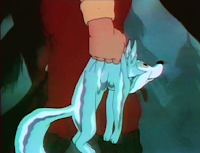 Chuck Jones' preferred use of sight or sign gags over dialogue gags is evident in the cuckoo clock scene. His love for sign gags show up when the cuckoo appears with a sign "On Your Marks", the next "Get Set", and fires the pistol spontaneously to create a good gag effect. For a quiet environment in the farms, the gag works.

It's interesting how he considered dialogue-heavy television animation "illustrated radio", and also said in many of his cartoons; the sound can be turned off and the story can be followed. Yet did many shorts in his greater years that relied on dialogue. Could The Ducksters be watchable without the sound on? 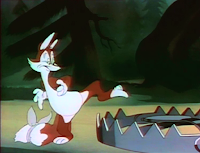 Chuck's timing is also coming along nicely, and is starting to use it for his own unique style. This is primarily seen early in the sequence, where the fox attempts to trap himself inside a giant bear trap.  A favourite trait of Chuck, he likes to test the audience's patience before the punchline can be delivered. 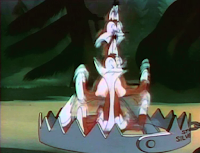 In this case, the fox walks over to the trap, and cautiously stretches his leg to the trap, but moves it back in hesitation. Instead, he walks back several paces and quickly makes a turn. He runs for it, and dives on top of the bear trap, but it doesn't go off to no avail. The crash effect on the fox creates an appealing vibrating look, thanks to the sharpness of Chuck's timing. 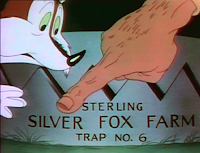 After hopelessly trying to set off the trap, he creates a diversion of walking away, leading the trap to close inanimately. Chuck nailed the piece of timing of the trap closing, adding emphasis to the trap outwitting the fox. The fox wails, "Let me in. I gotta get trapped! I gotta." Forcing the trap open, the fox disguises himself trapped as he stages the scenario by yelling for help: alerting the hunter.

Mel Blanc's French accent on the farmer creates a funny piece of dialogue when he forces the fox away, showing only an interest in silver foxes. Although having a human character not seen from the legs above is a common cliche in animation, it works well in this case, giving him a more intimidating feature. He shouts, "Get out of my trap, ragamuffins!", and kicks him away to a pile of old cans: which is how the silver paint entered the story. 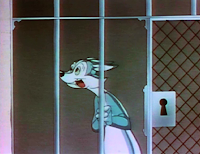 Led inside a cage, the fox relaxes in a state of luxury, for he is reserved to a "Mrs. Van Dough". This follows by a unique piece of layout by John McGrew which is complicated but fulfilling when two characters exchange dialogue. Instead of cutting back and forth to individual characters in dialogue, the camera pans from one character to the other. 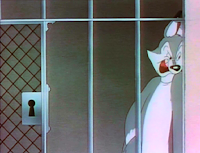 The conversation is exchanged between another fox (voiced by the great Frank Graham) who is in a cage next to him, filing his nails. He informs the disguised fox of a breakout on the farm at 9pm. 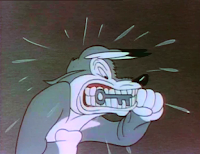 The fox's dialogue however, suffers from a sluggish pace and repetition. He responds with confusion, "Gettin' outta here? Outta here? No, no, I just got in here. I'm practically sold already. To, er, Mrs. Van Dough. He--he said so."

Some great posing and attitude on the tough fox who points his thumb at the fox, with an expression indicating he's crazy. Chuck's standards of quality character animation is beautifully expressed when the tough fox tries to reassure him to escape, or otherwise he'll be killed, hence the fox pantomiming a cut throat. The part also suffers from a piece of filler, such as the fox pathetically mimicking a cutting throat gesture. After he attempts to hesitate out of it, he indicates there's no "key". The shot of the tough fox biting hard on the nail fire, and creating perfect replica of the key is beautifully animated, adding some weight to the effect; making the gag much more believable and superbly executed. A slow sequence, it's a top-notch job by animator Bobe Cannon, who specialised in broad acting scenes, which he appeared to pulled off effortlessly. 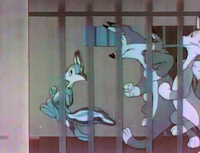 After the tough fox has unlocked all the cages, a large group of foxes pass through the hallway where the tough and painted foxes get lost in the crowd. The disguised fox uses it as a distraction to deliberately fall behind and remain in his cage. Relieved, a tag lands on his face, where to his discovery; he isn't wanted but only his skin. 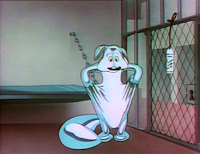 Confused, he remarks: "Skin? Cape? Cape?! Me? How do they get it off me?" At that moment, he hears a trapper sharking his axe, where he finally discovers the hard truth. Chuck Jones creates some funny and effective poses for the fox, and it's adds to great effect in a close-up of the fox reacting with fear.

Bobe Cannon's loose animation on the fox's melodramatic experience adds to the drama. His touches on the fox weakly stating, "I don't wanna be no cape" is a comical delight, as he loosely stretches his own skin. As much as how Chuck's character layouts fit wonderfully to the trauma and horror of the fox, it seems Chuck is a little uncomfortable with dialogue scenes, especially in terms of the pacing. Blanc's dialogue feels uncomfortably slow and forced, as the timid delivery doesn't match the persona. 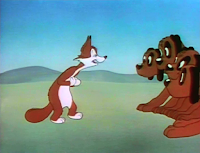 After the fox sets himself free, we are followed by a brief chase sequence of the hounds chasing the fox. After jumping in a river, and swimming across; the silver paint washes off the fox. At this point, he stops the hounds and points out that he's not really a silver fox, and reveals his true colours. 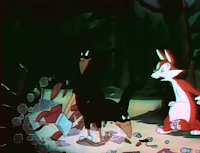 After a hopeless attempt to convince the hounds to spare him, they all retaliate and respond simultaneously: "Silver schmilver! As long as you're a fox!" They all group together and fight the helpless fox. 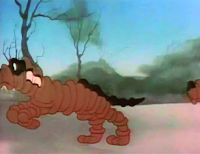 Ending the cartoon with a sophisticated punchline is the epitome of the Warner Bros. legacy, and it's proven to be an essential foundation to their humour of the 40s and 50s period. The colloquialism of the "silver schmilver" line adds to the cynicalness of the gag, which could've ended the short on a laughter scale.

Instead, the cartoon fades to its present tense, as the fox concludes his story to the crows. Not only does it create an amazing waste of a funny ending, it feels like Chuck had to stick the formula, by ending the short in its present day. The crows realise the bad side of his story, and volunteer by smashing the radio with axes. The cartoon's final gag is a lame punchline to the cartoon's conception, giving the short a weak send off.

Although Chuck had changed to making funny animated-cartoons from Disney-esque shorts, it's understandable that the transition doesn't happen naturally. The short could still count as more of a trial, before he achieved the standard Warner humour in Dover Boys. Chuck still managed to master a few techniques along the way, particularly his experimentation with timing on the bear-trap scene, as well as a beautifully suspenseful opening that was all built up for gag purposes. Much of the dialogue isn't as juicy as the Warner cartoons were turning out to be, but some lines stand out like the dogs' retaliating to the fox. Not exactly a fine effort by Chuck Jones, it's milestones ahead of his previous failures earlier in the year, such as The Bird Came C.O.D. but it's not as sophisticated or as well executed as recent triumphs like The Draft Horse. 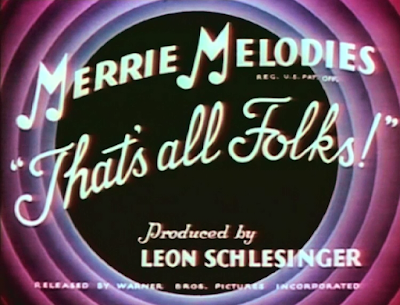