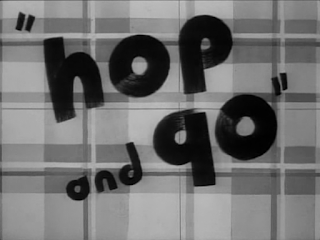 Norm McCabe rarely had the opportunity to develop a personal style like Chuck Jones or Bob Clampett; as he was typically lumbered with war-themed shorts. However, McCabe's take on a one-shot cartoon with a plot not heavily reliant on wartime references states his potential.

Millar and Don Christenen's story is in the same vein of a standard Warner Bros. short: a dim-witted kangaroo named Claude Hopper boasts about being "the best darn hopper in the whole world"; and two eavesdropping Scottish rabbits decide to use him for their own amusement.

The opening sequence indicates no sign of McCabe's lowering standards. For example an impressive camera shot features the camera hopping in rhythm to Claude's hopping action - an effect used similarly in Friz Freleng's Hop, Skip and a Chump.

Carl Stalling composes a little hopping rhythm which gives some added personality on Claude, and of course, Pinto Colvig's singing voice in the persona of Goofy is always entertaining to hear. The layouts on the opening shot and Claude Hopper hopping in perspective indicate Dave Hilberman's enjoyment of problem solving on complex layout work.

Characterisations and personas are also typical in the spirit of Warner Bros. in this short. Claude Hopper is portrayed as ignorant based on his heavy size and Pinto Colvig's Goofy persona. There's also a subtle reference of Colvig, too.

Claude brags to the rabbits about his hopping by declaring, "I've got a certificate to prove it", with the certificate reading "This guy is a goof" - a possible reference to Colvig known as the original voice actor for Disney's Goofy.

The Scottish rabbits, on the other hand are depicted as much smaller and slender in size - adding some craftiness to their low cunning. Mel Blanc is always reliable for giving some added personality (like the Scottish dialect on the rabbits) to characters who are portrayed as conniving, if nothing else.

Their contrasting size and personalities are put to good use in a sequence involving Claude Hopper's attempts of accomplishing the longest jump. As Claude leaps; the rabbits are hanging onto the end of his tail. Once Hopper lands, they leap from his tail and land on the ground in front of him. So, the rabbits take advantage of his gullibility by measuring the other rabbit in front - deceiving Claude into thinking he's been narrowly beaten.

Astonished, Claude attempts the jump once more but finds he's landed in the exact position as before. In an attempt to break the record one last time; Claude empties various heavy objects from his pouch to reduce the weight. The scottish rabbit takes his chance by placing a piece of bubble gum underneath Claude's tail.

McCabe's comic timing plays along nicely by giving impact and weight to the strength of the gum. Treg Brown's resourceful sound effects add to the right touch, also. Falling back from the stretchiness of the gum; Claude falls backwards and crashes onto a pile of junk that had fallen from his pouch - once again, outsmarted by the rabbits.

At the same time, Norm McCabe continues to fulfil his potential as a director - by using dynamics and uncommon styles of pacing and shot angles for sequences requiring it. Dave Hilberman's layouts are better appreciated in scenes involving Claude hopping on the branch of the tree, and landing backwards on a birds nest - resulting in the birth of a baby bird screeching "Mammy!" to Claude.

McCabe's use of dynamics are most revealing in the sequence where the rabbits attempt to loosen a giant boulder. The boulder is intended to land at one end of a log - in hope for Claude to have a grand leap.

Not only are the great compositional shots effective but also appropriate in its visual storytelling. For the scenes of the boulder falling - McCabe channels a little of Chuck Jones from this era (see My Favourite Duck and Flop Goes the Weasel).

The falling boulder is witnessed by each character with the aid of rapid pacing and several quick shots to make the anticipation gag more effective and dynamic. A daring feat to accomplish, McCabe's timing proves competent as he navigates through Hilberman's layouts wisely and effectively.

The boxing match sequence is another example of depicting both character personalities and use of creative pacing, as analysed earlier. Although the payoff itself is a little weak in creativity and execution.

The rabbits speed past Claude, creating him dizzy spells. Out of nowhere, one of the rabbits pulls out a fighting canvas effortlessly. This is also an occurrence with Claude's "goof" certificate.

Claude's bragging and boasting continues to do no favours as he considers himself an athlete. A taste of cartoon logic is taken for granted as one of the rabbits unexpectedly pulls out a switch from the fighting pole - causing one of the ropes to arise; causing Claude to spin around the rope in the style of an acrobat. The execution feels a little weak as the sudden appearance of a switch seems to not depict the rabbit's slyness as seen in the long jump sequence which follows after.

Some gags use some cliches typical of the Warner Bros. style of humour. This is evident in the sequence of Claude Hopper after being rescued from his collision with a tunnel.

He is brought back from the river, where one rabbit uses his tail like a hand pump; while the other rabbit rinses himself (with the dripping water coming from Claude's soaked hair) whilst singing Singin' in the Bathtub - a popular song choice whenever a character showers or bathes. The scene of the principal rabbit washing his hands on the water's pouch like a sink is a decent visual gag itself; and the unexpected delivery of the rabbit pulling the plug out for the water to fade is hilarious itself.

Like many McCabe shorts; the finale sequence is heavy on war-related references. Although some of the gags have aged overtime; some of the visual effects work still hold up well. Claude has begun his long continuous leap and on the way he encounters several war planes, as well as references to food rations - like the bizarre "price ceiling" pun.

McCabe completely manipulates time and length of his leap as the sequence cross-dissolves into nighttime. The colour styling and tone of a silhouetted Claude beneath a night sky is incredibly stunning and rich in style. As Claude strikes a match - the light reflections on Claude enhances the quality.

Claude encounters a calamity as beam lights flash right at him; as an unseen enemy targets and attempts to fire ammunition at him. A silly, funny little gag in the style of Avery or Clampett occurs in between as Claude attempts to shout, but to no avail due to the loudness of the firing. Then, he bellows: "Sorta noisy, ain't it?" as the firing halts momentarily.

Unaware that he is carrying a box of dynamite the rabbits planted underneath his pouch - he panics as he begins to lower at the ground. And so, Claude successfully hops out of sight as the box of dynamite detonates - creating mass destruction of the site.

As the smoke unveils - a smug Claude remarks, "Well folks, I guess we know who's champeen now!". In the following long shot; it's revealed that Claude placed the dynamite in the city of Tokyo - making him a hero for unintentionally causing destruction for the enemy. Without doubt, a hysterical ending for war-time audiences and film enthusiasts although the gag would date very quickly once the Japanese surrendered only two years - making the ending seem out of plate for contemporary standards.

A good change from Norm McCabe's usual war-related plots - although Hop and Go only contains some good elements in vein of the definitive Warner Bros. humour. Although the characters are stock personalities - they work well enough to create elaborate, dynamic sequences like the boulder and Claude's enormous leap finale. McCabe continues to expand and search for his personal style. It's a real pity this became McCabe's second to last short for Warners; diminishing his chance of being in the spotlight of other Warner stalwarts like Freleng or Jones. Despite such elements, McCabe's use of war-time references have dated the short and making the short underrated. 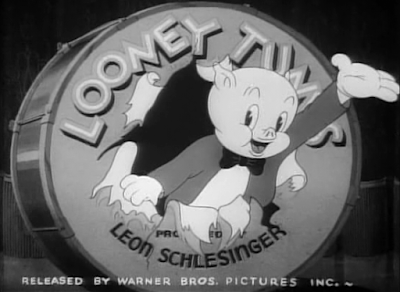