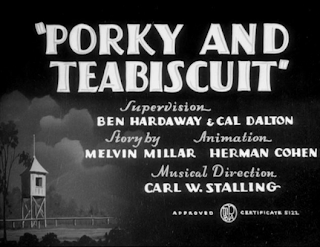 It appears the concept where Porky Pig has a father as a farmer was a concept still used even to this cartoon. Tex Avery started it off in 1936 in two cartoons, and Bob Clampett tried it out at least once - and Hardaway/Dalton here. It appears that NONE of the crew have completely finalised Porky as he is still playing as a child actor.

The cartoon starts off with a farm where the company is called Phineas Pig & Son and it appears to be a type of sign gag with lettering that Ben Hardaway was interested in. Porky's father then steps out and tosses a sack over to the cart. He looks for his son, "Now where's that no-good son of mine?!" and then calls for Porky. Ahh, it appears that his father is rather negative towards his own son, at least the comment he said.

It turns out Porky is riding in the farm on his toy horse which he calls - Cheesecake. Nice little set-up where we believe he's really riding. He walks over to his father, as his father then asks him to deliver the sacks over to the race-track. It catches Porky's attention whereas in the cartoon he aspires to be a jockey.

He leaves the scene as he is ready to begin. He jumps his excitement, and he then walks over to the car which is loaded with sacks. He is about to start up the fumes and the car - but it starts out in a rather dodgy form. It then melts for a while before it continues to ride along as normal. The sound effects of the car starting up is probably my favourite Treg Brown sound effect - but most of it would be first heard in one of the following cartoon Naughty But Mice. Porky's car then spins around the haystacks and then he arrives at the racetracks where the horses are inside the barns. He walks over to catch his money. 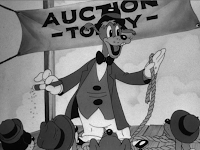 Afterwards - Porky walks out with the dough (11 dollars) and counts his amount before placing it through his pocket. Porky already sees an auction where it is already attracting a crowd. He runs over to see what is there. The auctioneer is already standing in front of the crowd as he is carrying onto a piece of rope and is calling out for the numbers for bidders. 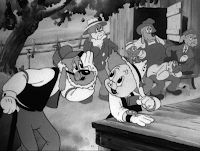 Porky and an old timer watch the auctioneer. The old timer asks, 'What time you got, sonny?' Porky looks at his watch, '11 o'clock'. The auctioneer then hears the number being mentioned and gets the wrong idea. There is some good story construction where the old timer doesn't hear and Porky shouts out the number. The auctioneer sells the horse to Porky.

Porky then objects: "But I didn't buy this rope!" - and the auctioneer's response is: "Take it easy, sonny. Just look on the other end and see what you bought". He walks over holding onto the rope and finds he already has a very healthy, fit horse.

Porky looks at the horse with amazement as he shouts, 'Oh boy - a racehorse'. An assistant walks over to collect the horse and responds, 'Pardon me' and takes the racehorse away. He then walks over and he makes a take where he realises that the bid he won was a nag. The nag costs - the whole setup, I feel was at least rather amusing - as we can only feel sympathetic towards Porky. Porky realises the problem and he runs over to the auctioneer who is about to drive away. He demands for his money in return but the auctioneer ignores him. 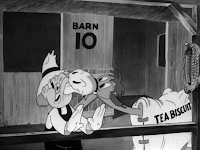 Porky walks over to the barn feeling rather dejected. He thinks to himself, and even criticises the low quality of the nag, and even expresses concerns of his father; "How will my father hear of this?" The horse (tagged as Teabiscuit) then walks over and licks Porky's cheek. Of course - that is a reference to a famous racehorse named Seabiscuit. Porky then tries to move him away, but then a Negro stable buck walks over, 'You better hurry up - you already got 15 minutes before the steeplechase'.

Of course - it's rather politically incorrect in today's standards to even show he's a Negro barn worker. There is a pan towards a sign that announces of the steeplechase and the grand prize is $10'000. Porky changes his mind and immediately is set out to change him in costume.

Porky places him inside a barn and asks him to stay whilst he changes into a jockey outfit - the question is if he even owns a pair. Meanwhile at the races - the caller then uses his gramophone record to play the race announcement call. Upon hearing the call - Teabiscuit immediately departs the barn as he about to enter the arena.

The band for the event are already playing - and Teabiscuit walks over to the band and watches the trombone that is being played. Teabiscuit uses his head to watch the main slide of the trombone moving up and down. Meanwhile there is already a youngster who blows up a balloon and then it bursts as it hits his behind - this already turns Teabiscuit scared and leaves in such a scurry which is some pretty funny animation. Teabiscuit already leaves the scene in such a hurry. 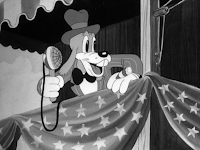 The big race is about to begin as the referee begins with "On your mark...get set...go!" and then fires his pistol - the race begins. One of the racers looks and finds that the horse is already clamped onto.

The jockeys attempts to unclamp it and the horse just dashes off immediately. Meanwhile there is a commentator (and I think was voiced by Joe Twerp even if it is the same spoonerisms). The commentator comments on the actions and then announces the typical line for horse racing "There they go!". As the race already begins - Porky and his horse - Teabiscuit already rush over to the crowd who are watching the game. Porky asks, 'Which way did he go?' The audience point left with their thumbs.

As Porky tries to catch up with the other competitors - he and his horse end up dashing past some bearded men as they then find (after the dash) their beards are all tied up. As Porky and Teabiscuit attempt to catch up with the crowd - the racers all race past him leaving Porky and Teabiscuit almost stranded. Porky and his horse almost realise the mistake and they then ride back to join in the race.

Porky is now in competition with a racer in front of him - there is a perspective shot which runs in a cycle where Porky tries to overtake the horse but the jock racer blocks him from trying to take over. Teabiscuit finally succeeds by biting the horses' behind and he overtakes - now that is certainly funny.

Meanwhile there is a driver at the scene who enters a 'Slippery When Wet' area. Porky and his horse then enter the 'slippery when wet' area where they slip. They crash into a barrel where the horse is caught inside the barrel - and Porky. Porky pops out and notices that the jockey is about to overtake him. Porky and Teabiscuit escape from the barrel - where the barrel is left bouncing around and traps the jockey and his horse.

As plans are going rather smoothly - Teabiscuit then hears the sound of the orchestra band that are playing. He is caught with the sound and he brakes. He runs over to the band watching what they are playing. As he watches the main slide of the trombone move - Porky is rather annoyed and attempts to get Teabiscuit moving.

The drama continues as the race jockeys are riding closer and closer with a perspective shot which is certainly rather convincing and effective. Meanwhile the mischievous boy with the balloon appears again as he blows the balloon. The balloon then lets go of itself and ends up inside a tuba. Porky tugs at the horse with the reins trying to force him to get on with the race.

The balloon on the tuba then bursts and the horses whinnies loudly that he exits the scene. After all the zooming and pacing - he then finally ends up pass the finishing line, and wins the race. The host declares him the winner. As posies and a wreath are thrown at him - the paparazzi then walk over for a picture. Teabiscuit whinnies and exits the scene - afterwards - we find he then plays the trombone. He plays it rather well before going off coughing rather violently. 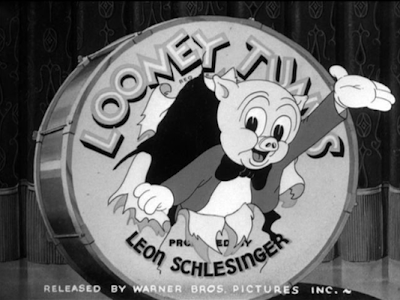 Overall comments: My overall impressions of the cartoon is I feel I don't have too much problems with at all. Even though it may be a rather bland cartoon, with a basic storyline and even a typical 1930s Porky entry - I have to say my thoughts on this cartoon was it wasn't too bad. We know from at the beginning that Porky aspires to be a horse jockey, and he accidentally wins a nag at an auction - but somehow the nag is able and fit enough for the race. Some of the cartoon's pacing I thought was rather decent as I feel the speed in this cartoon was serviceable. I do find that the reactions of when Teabiscuit has a balloon burst on his behind to be a funny use of comic timing. The animation drawing of the overall cartoon was a little sloppy on some edges.

It appears to be a quirk in these Hardaway/Dalton cartoons where somehow the cartoons are badly shaped and sized - some of the shots with Porky show he looks way too tall and it is a terrible match. I thought the posing of the real fit racehorse was some solid drawings. Most of the gags in the cartoon weren't special - even at the racehorse. None of them has its merits as they feel like the gags you would expect in a black and white Mickey Mouse or Bosko cartoon. The Joe Twerp commentator is probably what made the racehorse scenes at least appear to look more like a late 1930s cartoons even though it wouldn't have happened without Hardaway's influence of Tex - I'd gather. Porky's father in this sequence is certainly shown as a rather rotten character at the beginning - as I find him rather likeable. Even they had to change Porky's poppa's design - when before that he appeared to actually have a definite design from Avery's and Clampett's cartoons.
Posted by Steven Hartley at 15:12