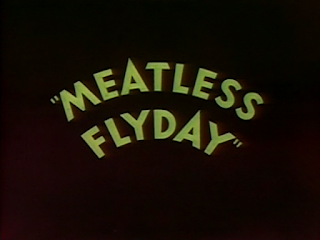 
The premise of a malicious spider preying on helpless flies was already a cliche in cartoons, by the time Meatless Flyday was in production. The source material can be traced back to John Heywood's pseudo-epic poem, The Spider and the Flie in 1556. Mary Howitt's opening line in her poem of the same name: "Will you come into my parlour? said the spider to the fly", remains one of the most recognisable quotes in English poetry.

By the early 1940s, the Schlesinger studio began inserting twists to old cartoon formulas, ranging from cat-and-canary shorts like Puss 'N Booty. The "victims" were being portrayed as hecklers to the antagonist, which called for stronger gag dynamics and hilarious characterisation.

Michael Maltese's take on the spider vs. fly formula is enriched by some aesthetic characterisation for the short's antagonist. The spider is portrayed as a jolly, loveable rogue - whose sinister motive marks as a deliberate contradiction to his personality.

His persona echoes Tex Avery's laughter and mannerisms, that he previously portrayed in shorts like The Bear's Tale and Ghost Wanted. Tex had already settled at MGM in 1941; so the character's voice is performed by Cy Kendall. Kendall is best remembered as a prolific character performer for over a hundred features, and his Tex "impersonation" works fine. A part of myself suspects that the characterisation has traces of Thockmorton P. Gildersleeve, despite the lack of his signature laugh.

The opening scenes establish conventional traps plotted by the spider, but his bubbly personality almost overlooks them. His first plot is to entice the fly with a sugar cube, attached to a string. He jovially laughs: "Come and get it". It's already indicated that the mute fly is a heckler to the spider, as he advances towards the sugar cube to pick it up. The spider, holding onto the piece of string, is caught by the force of the fly, who holds the cube on top of the ceiling.

In an impressive 3/4 down shot, the spider is hanging perilously from the thread. But, the spider cuts the rope with scissors - leading to the spider's fall as his head is clobbered by several sugar cubes. The spider's jovial personality increases his likability by laughing off his foiled plan and addressing to the audience: "Caught me off my guard."

The following sequence sets up another scenario, only to be foiled again by the heckling fly. The spider is seemingly watching the fly perform a trapeze act with the kitchen hooks - and awaiting his fate. The spider still finds some humour in the scenario as he mocks the fly, "Look at him, tryin' to heckle me! A poor man's Bugs Bunny". So, he laughs some more!

In the spider's first attempt to eat him, the fly narrowly escapes a close call. He stretches his tongue like a rubber band and releases it, causing him to stagger. In the second attempt; the spider is hanging onto one of the hooks; and momentarily traps him. A la Bugs Bunny, the fly kisses the spider and gives him the hot-foot.

Michael Maltese's lighthearted approach to the spider enhances the comedy to more the standard scenarios, seen in the earlier sequences. The spider finds himself in greater peril compared to the previous scene, once he's falling from the hook with his burning feet.

Even when facing calamity, he continues to find amusement from it. He laughs and speaks to the audience: "Look folks, I'm a Zero!". It serves as a funny metaphor that implies the spider is portrayed as a kamikaze pilot, plummeting to disaster. Instead of destruction, he's clobbered again by sugar cubes.

For the following sequence; Friz Freleng's use of direction and dynamics turn to a more menacing approach. The first few shots puts emphasis on the spider's hand preparing another plot for the fly: which involves painting a buckshot, to disguise it as candy. It's nicely executed in staging to emphasise peril. 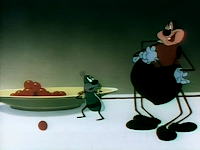 For a moment, the plan succeeds as the fly gulps a handful of buckshots down his mouth. The weight of the buckshots make it incredibly difficult for the fly to leap out of sight - resulting in a small chase scene.

Freleng's crisp timing starts to takes its course, once the spider casually holds a magnet out for the fly. As he attempts to resist, the power of the magnet increases to the point when a door forcefully opens; leading to knives and other cutlery speeding towards the spider. Freleng's timing turns to a brutal effect as the knives supposedly finishes the spider off.

The camera pans to reveal that the spider narrowly evaded his end. Friz adds an additional piece of horrific value, when a meat cleaver supposedly slices off a part of his leg. In a close-up, the audience are reassured that his toes remain intact, as they pop up from his partly-cut shoe one-by-one.

Freleng's timing solution works to great effect in a detonation gag. The spider spots the fly posing as a figurine in the ambiguous feature of a wedding cake in a household. The spider poses next to the fly's disguise as a groom, and cackles with cruel irony: "Hello, Sweetie-Face". The scene is at first depicted in close-up of the spider, but the camera trucks back to reveal a firecracker the fly replaced off-screen. The spider menacingly says, "How about a little kiss?" to the "fly", unbeknownst to him. As the spider kisses in anticipation, the cracker detonates. A classic testament of how comedy is executed through clarity and staging.

Friz Freleng's masterful timing is highlighted in an elaborate chase sequence, of the spider and the fly's chase through an electrical conduit. The chase is comically interpreted through effects animation. The fly is visually represented as a yellow light; and the spider being red.

Some wonderful touches are added for comedic effect; such as the fly's take, which reads as "Yipe!". The pair chase run down the conduit separately, creating a figure eight until they crash into each other.

Soon, the effects animation depicting the chase becomes more absurd. At the center of a conduit, random pieces of imagery like flowers and other assorted things start to flash to Carl Stalling's score. The gag is reminiscent of a neon billboard gag, seen in Freleng's Light's Fantastic. It also serves as a forerunner for the mine sequence in Chuck Jones' Beep Beep, many years later.

The multicoloured flashing lights catches the attention of an air raid warden, who yells: "Put out that light!". And so, the lights flickers out in succession - leading the pair back inside the house. It's probably an animated highlight of the entire cartoon. It's beautifully elaborate and funny, to the credit of Freleng and Stalling; and the effects animation.

For the closing sequence; the spider finally catches the fly. The scene fades in to reveal the spider scraping his knife, ready to feast on the fly. The audience are expecting a twist that intervenes with the fly's demise. But, the payoff is a tad disappointing and predictable. The fly points a calendar to the spider, which reveals the date to be "Meatless Tuesday": a WW2 government campaign to encourage the public by rationing their meat for the war effort.

The spider responds with great irritation and angst, that he takes the matter over to the U.S. Capitol. The final shot of the Capitol's window depicts the spider's off-screen complaints to government officials: "You can't do this to me! You just can't!".

It's a satisfying and humorous gag to close the cartoon, but a part of the problem of its predictability is that it links to the cartoon's parodying title: Meatless Flyday. The payoff would've been executed had a different title been suggested. Despite my nitpicking, it's plausible that WW2 audiences overlooked that detail.

To conclude: Meatless Flyday, despite being relatively short, serves as a nice potboiler; enriched by funny characterisation. Michael Maltese's forward-thinking approach to story makes a somewhat tired formula feel fresh and inventive. A portion of the gags are heavily themed with wartime references, but the premise itself has a timeless quality. As discussed, the electrical conduit sequence wonderfully showcases Friz Freleng and Carl Stalling's timing - which is a challenging feat from a lot of levels. Despite the jolly, Tex Avery-persona used several times in cartoons - it never fails to charm. 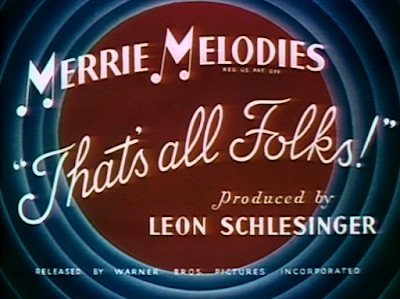