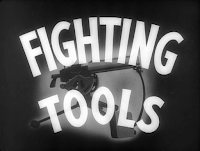 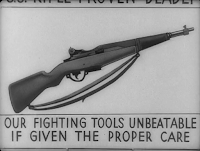 To some extent, the cartoon is both propaganda and satirical. It has propaganda elements incorporated into it - such as: a U.S. front headline bragging about their soldiers having the best artillery in the world. However, there is a hint of honesty in the article - perhaps, to prevent unwanted arrogance from army recruits. It's reported that the U.S.'s fighting tools are superior - but only if they're handled properly. Bob Clampett has Private Snafu as a guide on how to screw up. 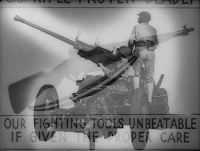 The propaganda tendencies are fairly deliberate - in order for satirical sequences of Snafu's arrogance and incompetence. Watch out for the small Hitler suicide headline on the front page, a hidden gag which Clampett appeared to take pride with - by using it previously on Tortoise Wins By a Hare and again in What's Cookin, Doc?

Bob Clampett applies an attractive montage of the different fighting tools the U.S. army have - with images of the artillery split between illustrations and photographs. Although the effect was used for propaganda purposes, it's a intentional setup on how Private Snafu would react to the news - with arrogance. 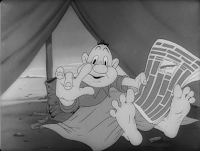 Indeed he does, the scene cuts to animated form of Snafu bunking in his tent reading the same newspaper. The ultimate comedy of errors sings with pride and arrogance, "I'll be the world's greatest hero - with these guns, I've have nuthin' to fear-o!". Throughout the short, Dr. Seuss' rhyming scheme is sung in the style of The Gay Caballero. A part of me ponders on whether the choice of melody was Clampett's or Theodore Geisel's vision. 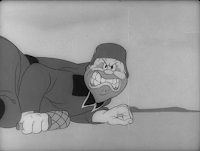 The following scene cuts to a shot of Snafu's tent - surrounded by various fighting tools - like his gun and cannon, indicating his assurance of safety and invincibility. The scene features beautiful posing and animation acting by Schlesinger's master animator Bob McKimson.

Meanwhile, a mean looking Nazi soldier is crawling across the field, with a hand grenade attached to his hand. His offended reaction to Snafu's line: "My wonderful guns, will moider dem bums! / an' I'll bury them in their latrin-o!" is priceless in both caricature and exaggeration. 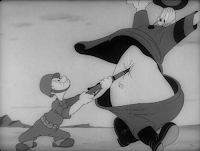 Once Snafu finishes his little song, he senses presence in the wilderness and pulls his shotgun digged in soil - the first sign of inadequate care on weaponry. Similar to Chuck Jones' The Infantry Blues,  a comedy rule of three is utilised throughout this cartoon to showcase Snafu's incompetence and his struggle to maintain his confidence. 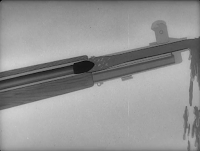 As "cheeky" as Clampett goes, Snafu prods his gun right at the Nazi's rear end, yelling: "Stick 'em out, or I'll blow ya brains out!". Got to love the irony of Snafu's dialogue, as Snafu's gun is pointed elsewhere besides his brains. 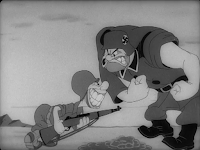 The Nazi soldier reacts wildly to the weapon as he raises his arms, staggering. Watching the soil dripping from Snafu's gun, the Nazi regains his courage, commenting/singing: "That rifle looks just a bit goo-ey / If you 'tink I'm scared you're plum-screwy!".

A close-up diagram of Snafu's bullet desperately trying to shoot away from the bloated soil, shows controlled, solid timing - followed by an amusing squirt effect justified by Treg Brown's sound work. Intimidated, Snafu gives the soldier a Warner-esque sheepish grin (animated by Rod Scribner), until he bashes him with his gun, without second thoughts. 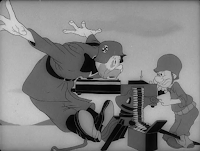 The following sequence of Snafu's attempt to frighten the Nazi soldier with a machine gun; is structured similarly to the previous sequence. Snafu will at first, intimidate the Nazi. At a moment of arrogance, he'll fire the machine gun at him. He'll keep doing so at the cost of overheating the gun into deteriorated condition. 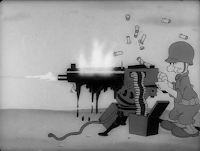 So, the German soldier would return and sing: "That gun was neglected - no water connected!". Snafu's characterisation is established well by enhancing a morale that arrogance can be a factor of inadequate care. 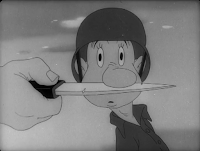 The Nazi points out how their weaponry also work fine and are given the proper treatment and care. From what appears to be a rare insight on Nazis' strengths by American propaganda - it ends up poking at them, by revealing a close-up of a Nazi revealing a rusty pocket knife.

While the propaganda is still fairly biased, the timing of the Nazi revealing the pocket knife is effective and daring - with Treg's "boing" effect to enhance some comedy. Snafu timidly comments, "Yipe" - until he runs away from the Nazi - and onto Snafu's last chance of treating artillery with proper care.

Like the previous two sequences; the following follows a similar structure. This time, the Nazi encounters a much more threatening weapon, the cannon. Notice how in each sequence; the weapons become more threatening.

Clampett's sense of comedy saves the German soldier from doom, as we encounter a hysterically camp-ish mouse - with sublime work by Virgil Ross and Mel Blanc's delivery. Ross adds some wonderful touches of the mouse swiping the dust from the cannon with its finger.

The Nazi learns further about the cannon's unstable condition as a group of ducks (resembling Daffy Duck), fly away from it - complaining about its stench. Clampett's charm is also enhanced as a baby duck, impersonating Katherine Hepburn, comments "Rally they are!" on the cannon's rusty state. 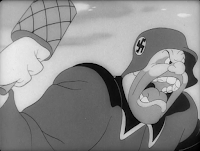 In response, the Nazi blows inside the cannon - causing the dust and debris to fly inside Snafu. Realising, all his tarnished weaponry is hopeless against the Nazi - he attempts to make an escape on his Jeep, but struggles to start the engine due to low car battery. 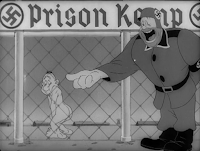 Clampett applies some nice dynamics of close-ups with the angry Nazi, that inter-cuts with a frantic Snafu struggling to start his Jeep. At that moment, he tosses the hand grenade - which meets Snafu's doom - but not by death. 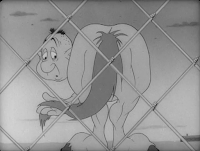 The closing scene features a full-frontal naked Snafu held captive at a Nazi concentration camp. Clampett exploits the freedom he has from Production Code censors, by applying his juvenile tastes into nudity. The Nazi soldier has the last laugh, singing: "Like all careless gents / He vinds up behind fence / Snafu is the vorld's greatest zero!".

Ending with an Axis victory - Snafu looks at his buttocks, which morphs into a mule's rear end. The lesson learnt, to treat your fighting tools with the right care. While Private Snafu meets a tragic consequence as per usual - at least it's more light-hearted and humorous a la Bob Clampett.

This Snafu cartoon represents one of only two that were directed by Bob Clampett. I'm curious whether it's attributed by Clampett's habits of falling behind schedule - indicating his minimal output on Snafu shorts. Even so, he remains faithful to the series' premise, by offering his directorial talent to create more innovative disasters for Snafu. Although the Snafu shorts are built largely on dark comedy and morale - Clampett appears more interested in entertainment value and toilet humour. At the same time, he creates a fair balance of cartoon action and morale. Despite his low output on the Snafu shorts, it remains a fine effort.
Posted by Steven Hartley at 16:42