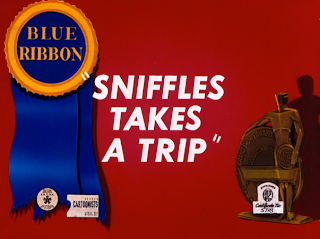 After Chuck Jones has already established Sniffles as a Merrie Melodies star in 1939; he had intended to use the character into rather Disney-esque situations which would require perilous adventures; we've already seen him in threat of a hungry black cat whilst drunk, and in threat of an owl, and this time; threatened by nature. 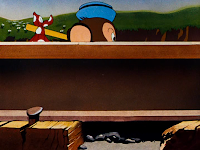 Outside the metropolitan area; where the rural surroundings dominate   the view from an audience's perspective; its displayed as rather peaceful and remote. Hummingbirds and butterflies fly around the scene to display the countryside's poetry and beauty. Its peace is only to be interrupted by a singing Sniffles who is walking around the rail tracks singing.

Sniffles walks around the tracks; where in close-up you can only see his head bobbing up and down. He sings a very cutesy song about how he will enjoy his 'healthy holiday' and lists the activities he will do. 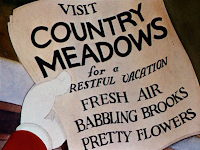 It features very uncreative lyrics that are just full of whimsical pandering, and of course; he has an irritating singing voice. He climbs on top of the rail where he the goes into a brief finale as he holds a note from his vocal chords.

Just as he finishes off singing; a crow then crows on top of a sign which heads to the direction of Country Meadows. Sniffles remarks the bird is "a robin"; when it clearly isn't..unless it was supposed to be funny. The crow then flies out of the sign; and then a rather slow sequence appears where Sniffles looks at his brochure to find directions towards his destination. He holds out his brochure in a point of view shot; where he looks towards the sign; which is done with the camera pan effect. This part of the sequence is really intriguing to me that it differs from what you typically see in a Warner cartoon. It isn't the technique or backgrounds or anything like that; it's Carl Stalling's music which plays underscore. It's  such a unique taste for Stalling that he creates such wonderful poetry of the countryside with music, and you wouldn't generally associate the music cue to Stalling; as he rarely used flutes.

Sniffles, amazed as he is very near his destination point exclaims 'Gee willikers!' with joy. He tosses the brochure out of the way; picks up his bindle and carries straight on towards Country Meadows. Just as Sniffles climbs over the rail tracks and off out towards the countryside; he then walks off to the wrong destination, but easily mistakens the area for his destination. 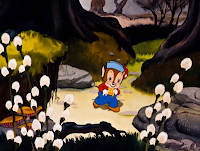 In the following long shot scenes; Chuck Jones makes the Sniffles walking scenes less attractive towards an audience member where the backgrounds were intended to dominate the scenes to create its fascination for Sniffles.

It's also meant to show a liking towards an audience member, appreciating its attraction. Just as Sniffles walks through the woodland areas with admiration, he once again quotes: "Gee willikers. This is the life".

As he grabs out his binoculars from his bindle (it almost looks thats all he has carried inside his bindle). From the binocular's point of view; he moves the camera very slowly towards the close-up of the pretty flowers which Sniffles love looking at. He comments with joy: "Boy, oh boy. Really out in the country".

Just as he moves his binoculars throughout the scene; in a close-up he then encounters a fly which looks horrifying from Sniffles' perspective.

Through Jones' layout drawings; he creates a rather fitting illusion to show the fly in close-up and an attempt to make the monster look a little bit scary by showing the veins from the fly's eyes. The moustache is also a rather fitting and light touch. Sniffles then makes a reaction out of the fly from the binoculars and staggers. Sniffles stops reaction when he peeps through is eyes to discover it was only a fly. "Shucks, only a little fly". He then scares the fly away with a gentle "boo". So much delicate drawing on Sniffles in that scene, particularly with the hand movement, that it's all preciously handled.

Afterwards; Sniffles decides to take a rest which is a part of his rest and relaxation. He pins a hammock and ties it between two tree trunks. After tying the hammock up; he hops on top where he stretches his arms enjoying the relaxation. "Yes, it certainly is peaceful, this afternoon".

Just as he is about to doze off; a woodpecker flies on top of the trunk upwards where the woodpecker tends to his business: pecking.

It's a rather realistically looking woodpecker and Treg Brown's sound effects are so unique and creative, and creates such believable effects with sound. Sniffles gets a jerky reaction from the hammock shaking; and he realises it was due to the woodpecker's pecking.

He protests: "Hey, don't do that!"...then the hammock then goes into a complete swirl where Sniffles merely only looks like an airbrushed effect. It may not be hilarious comic timing from Chuck, but the colours of the airbrush are very effective, and fun to watch. Sniffles finds himself completely tangled inside the hammock. The woodpecker pecks again, where Sniffles hits his head to the ground; ends up in a complete swirl until he's completely out of the tent. He walks completely dazed from that effect.

Sniffles then finds another spot where he ties the hammock; as he mutters about the woodpecker. Believing its a safer position for him to sleep him; the camera pans upwards where we discover its a large crane which Sniffles has tied the hammock at the crane's legs. The crane then begins to start walking; and Sniffles' hammock then moves at different angles due to the crane walking to the pond. 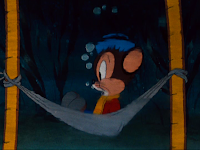 The crane walks inside where it sits on top of the pond. Meanwhile underwater; Sniffles is seen underwater, asleep and unaware of being under the pond. Sniffles then stretches and yawns as bubbles flow out of his mouth.

After noticing the bubbles for a while; he then makes a 'take' realising he is underwater before he climbs back up into the surface. Possibly the only popular song used in the music cue (Well, at least the only one I know is) is I'm Forever Blowing Bubbles which is heard during the underscore.

Sniffles climbs on top of the crane to save himself from being drowned in his sleep. He climbs all the way on top of the crane's bill. He analyses and observes the eyes as well as the proportions. Afraid, he runs off but almost falls off the bill but hands onto whilst dangling.

Great POV shot of the crane staring straight towards Sniffles with a threatening look which causes Sniffles to drop into the water. The splash scares the crane and flies out the scene. After Sniffles drops, he then spots frog's eyes out of the water, which he mistakes for an alligator. "Shucks, an alligator! Huh, an alligator!". Then Sniffles realises, "Gosh, an alligator!" and runs out of the pond. Sniffles hides behind a tree and watches the frog swim towards a lilypad, where the frog is fully identified. Sniffles sweats with relief as the camera pans upwards at a beautiful sunset setting. 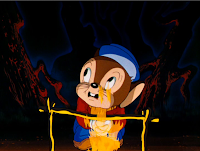 As the sun fades down; nightfall has already arrived. Sniffles; sitting all alone in the dark sits by a fire which he feels rather insecure about its environment. He looks around the darkness of the forest as he hesitates: "Yeah, it certainly is peaceful out here tonight in the dark, alright. It's sure nice and dark, alright".

The backgrounds create a lovely illusion towards Sniffles' fear of being the dark and also a insecure feeling. Sniffles listens out for a bird sound and makes a little reaction. From his perspective; its a group of little birds walking through the dark; all in silhouette.

Carl Stalling's own music during the underscore of the climax is also completely different as it has a much more unusual use of suspense and force. With the eyes from the trees glaring at Sniffles; it's pretty evident a lot of this was heavily influenced from the scary forest sequence in Snow White. Notice how each reaction shot of Sniffles was all animated originally as one scene but Chuck cleverly split certain takes into individual shots. After all the intenseness and glaring in the forest; Sniffles snaps and then rushes out of the woodlands, afraid. His hat flies off as he runs out of the dark forest, back onto the rail tracks and back to the city. The camera pans upwards where, as discovered, Sniffles took the wrong direction. 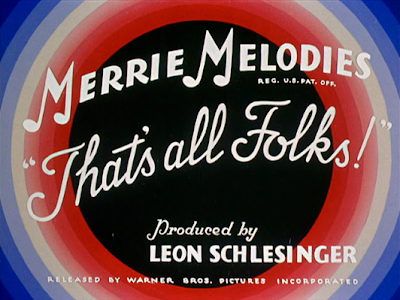 Overall comments: This Sniffles cartoon is one of the most unique; as well as one of Chuck's most Disney-esque, gentle shorts of the slow-paced era in his career. In many aspects; it feels a lot different towards a Warner cartoon. One of the main differences which I still heavily incline to believe is Carl Stalling's music he provided throughout the score. Sure, in Chuck's other syrupy shorts: Stalling's music cue trademarks were still evident, whilst here it feels like a complete new world for Stalling's music. A lot of his music is soft, full of suspense as well as effective. He uses flutes for the opening sequence, as well as a unique musical score for the dark sequence; before the climatic stages where Stalling's traits are evident in the ending shots.

Artistically it is also very well unique; the backgrounds are full of richness as well as colour; and Chuck's cinematography as well as staging is evident. He has a good use of dramatic staging in POV scenes where he wants the harmless characters to look believably speaky and to show we feel for Sniffles' fears. He's also shown good arrangement with the shots; particularly in separating Sniffles' scenes as well as point of view shots of the flowers, creatures in the daytime; and also nighttime. In spite of its artistically challenging short and being one of the most unique shorts in the Warners catalogue; its also a rather unspectacular short in terms of its story. It's really the same formula which is evident in the Sniffles cartoons; where Sniffles ends up in peril but mainly by his fears and insecurity. If it was definitely intended to be; Chuck's approach to the short being gentle and soft feels sort of like Chuck took 'softness' at a bit of a stretch.
Posted by Steven Hartley at 16:09