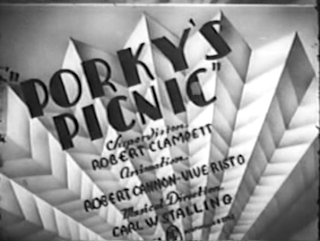 
250 reviews reviewed which means that roughly one-quarter (25%) of the entire WB original collection  have been reviewed. 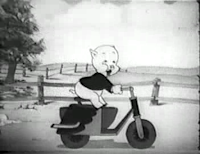 The cartoon begins with Porky who is riding on his sidecar and announces to the audience: 'I'm going to see my girlfriend', and then he struggles to stutter out Petunia's name. He continues to stutter her name which then gets really annoying to the point you want him to get on with it - then he mentions, 'I sound like a motorboat' which is just a very cheesy line. 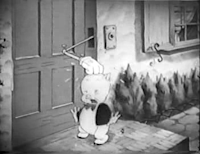 That brief opening itself reminds me a lot of what the old early 30s Bosko or Mickey Mouse cartoons looked like; where Porky feels as bland as those characters and the atmosphere feels the cartoon was made in the wrong time period.

Afterwards Porky parks his sidecar at Petunia's house in a bird's eye view. Porky walks over to Petunia's porch and at first, he combs his hair to make his appearance dandy. The way he just walks over to Porky's door with the pandering is just enough to make me lose my interest as I already know it's really weak for Clampett's standards. This whole scene just make Porky feel like a softie and it's just been padded in. Porky then rings the doorbell. An extended hand arrives out and knocks on the door (and Porky's head) in the theme of Shave and a Haircut. The hand knocking on Porky's head is cute. Petunia walks over the door and looks at Porky with an ecstatic voice, 'Why Porky!'. 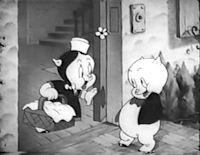 Porky then asks Petunia whether she would be interested in going out with Porky for a picnic at the park - and she replies enthusiastically, 'Would I?' and she quickly dashes up the stairs to get her basket and back down in about a second. They get ready to leave holding each others hands. She comments: 'It sure is a lovely day for a picnic'. Meanwhile, Pinky is seen inside the house asleep, but wakes up and lowers the baby chair and walks out with it. 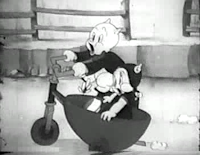 Meanwhile on the road we see Porky driving whilst Petunia is sitting on the side of the side car. A honk is heard off-screen so Porky moves over to the right. It turns out that Pinky is the one riding who is honking as he rides on his scooter and grabs out a horn and honks it which is a little bit of Clampett humour. 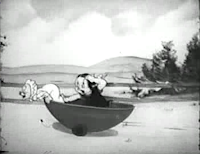 Petunia gasps: 'Why its Pinky!'. Porky rides over and his scooter knocks a rock but Porky catches him on time. Porky then asks Pinky to behave and encourages him by telling him the story of Glodilocks and the Three Bears.

As Porky already starts the story - Pinky takes the screw out of the sidecar (attached to Porky's gear) and then they are both disattached and both go through different routes. All of the gags here are extremely weak and the cartoon isn't getting anywhere! The way Pinky just screams and squeals like a baby is obnoxious enough through Berneice Hansell's voice effects. Meanwhile there is a steam locomotive steaming by and the '515' train is obviously the famous reused animation which started off in Rhythm in the Bow - but who gives the monkeys? 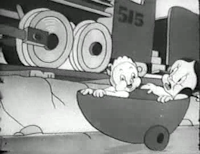 Pinky and Petunia are still stuck in the sidecar where they are near the steam train but do find themselves at risk when they are about to go through the crosstalks. Please, help me '515' train and run them over so I don't have to put up with Pinky or even review this cartoon. The traffic light makes a signal for the train to 'stop' but Petunia covers her eyes believing she will be hit. 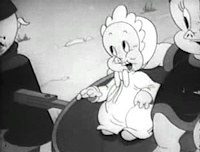 The train then makes a complete sudden stop and the sidecar continues to cross the tracks without any damage whatsoever. Oh man!! Afterwards - the sidecar immediately attaches back into Porky's gear.

Hang on a minute - how can it physically happen when the screw driver isn't even there?? Its crazy!! After being attached - Porky finishes off the rest of the fairy-tale, and not even knowing what they both went through. Pinky then completely fakes her interest by describing it as: 'that's the best story I never heard' - now...how does that make sense? Its not even funny, and the voice is just more annoying to hear than to laugh at Pinky faking it. 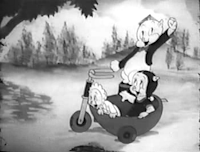 Porky and his lot then arrive at the city park where the sidecar stops and they arrive at their spot for the picnic area. Petunia comments: 'Well', then Porky: '..here...', and Pinky: '...we are' which s just odd. Porky then stretches his arms and suggests, 'Guess I'll take a...' and dashes over to the hammock and finishes the last word: '...nap' which I don't understand what the purpose of that was. 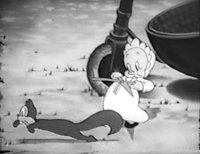 Meanwhile there is a squirrel standing near the sidecar who have picked up an acorn. Pinky is already carrying with him some shears, and yet, for no reason (or maybe sadistically) tries to decapitate the squirrel's head which then follows into a sequence.

I don't see how THAT is even supposed to be humorous or funny---it's just cruel and unpleasant! It's more unpleasant when the squirrel hides under a tree stump and the squirrel's head pops out and there is a sequence where the squirrel has to avoid having his head cut off by the shears--geez, murder!! Petunia arrives at the spot and then drags him out and wraps his knuckles for wandering off. Well, I'd thank Petunia for once for saving the squirrel, but to even telling off for trying to kill the squirrel - Jesus! She takes Pinky over to the tree where he can have his nap whilst Porky is resting on the hammock. 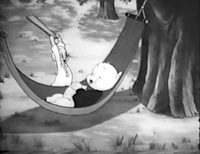 Porky is snoring in his hammock - and once Petunia is away; Pinky will play. Pinky creeps over to Porky's hammock and tricks him as he whacks him with a paddle but dashes back pretending to be snoozing. Porky wakes up and shrugs not even suspecting Pinky. Clampett is reusing that gag which he has used before in Porky's Naughty Nephew except with different conclusion.

As Pinky walks over in an attempt to whack Porky again; Porky immediately wakes up with Pinky caught completely. Porky asks sternly; 'Pinky, what were you going to do?'. Pinky responds: 'I was just going to...' and then he whacks Porky with the paddle a couple of times. Okay, I'll admit that is kind of funny as it does hugely resemble the Looney Tunes humour; but it could've been much funnier if it were one huge whack...but hey, early days. Porky looks at Pinky as he walks away. Porky looks at Pinky and comments sarcastically: 'Cute kid' and pantomimes throat being cut. 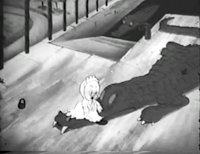 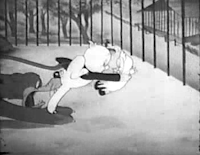 Porky is awakened by Petunia as she screams with fear: 'Porky! Porky! Look at Pinky, etc.!' and she is already panic-stricken as she points to Pinky in the zoo area. Porky leaves his hammock and dashes through the zoo area, and even makes it through the alligator's cage (misses the snapping jaws).

Porky zips around the zoo cage-to-cage looking for Pinky and spots him inside the lion's cage sleeping with the mother lion and her cubs. Pinky waves towards Porky as part of his mischievous plan. Porky quietly creeps over to try and retrieve Pinky. The lion wakes up instantly with sudden timing which then follows into a repetitive chase sequence of Porky and the lion running around the cage in circles. Okay, but what is really much point of this chase sequence - he managed to creep through the thick bars - why couldn't he have just ran straight out and not running around the cage like a cretin? 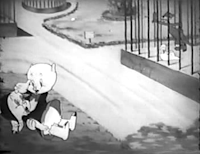 Petunia immediately faints and Porky quickly zips out of the cage so he can fan Petunia to try and make her conscious. He runs back in -- and tells the lion the chase can still continue. Of course, knowing this is all supposed to be funny and goofy...but what bothers me is he leaves by escaping through the bars when actually he could have just escaped through them the very first thing after the lion woke up. 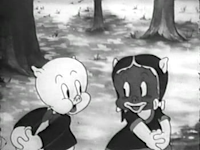 I'll admit the timing of the lion being trapped and tangled by the bars is really neat and firm timing there. Porky runs at the spot, and even returns back with Pinky towards Petunia in a type of American football manoeuvre.

Porky's face is now completely covered in mud; and Petunia embraces Porky and smooches him and her face is also covered in mud. The mud in Petunia's face of course make her appear she is racially stereotyped there. Pinky looks up and then spots the same squirrel he tried to decapitate earlier. He creeps up towards the squirrel with his shears and the squirrel manages to trick him by whacking him with the paddle. While it serves him right, I think Pinky being whacked by the paddle - just wasn't enough justice for him.. 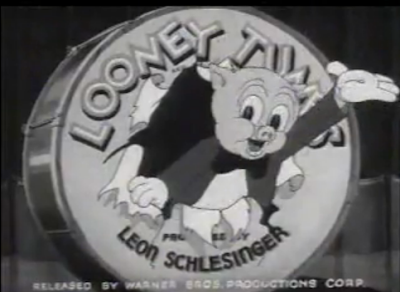 Overall comments: This cartoon is so far and by far one of the weakest cartoons that Clampett have ever made. It's completely clear by this point he couldn't care less about the pig. Here, it appears he just plans on treating Porky like any bland straight-man characters that even Mickey Mouse or Buddy could turn out with funnier results compared to this cartoon. Then again, the cartoon probably would've worked better as an early black-and-white Mickey Mouse or Buddy cartoon, even though I already produced a picnic cartoon. Porky Pig certainly feels like an out-of-date character of his time and even the introduction of the cartoon is suffice enough to show you how bad the cartoon is going to be. If you thought Pinky was obnoxious in Porky's Naughty Nephew - then obviously, he is even worse in this cartoon. Also, the cartoon also appears to have hardly any gags at all - at least no funny gags.

The only gag which I would give credit is when Pinky whacks Porky in the head when he answers Porky's question - the way it would've been executed from the script would sound like a funny gag but Clampett didn't exactly present it in a hilarious form. Petunia Pig is also pretty pointless as a regular character in the series, and I'm glad she was dropped out after Naughty Neighbours - and appeared to have made some career in comics afterwards. How come if Clampett was extremely bored of directing Porky cartoons, and yet would decide to make low-quality cartoons and even make Porky feel a lame director? I guess we'll never know, other than through an educated guess he was fresh of ideas on making Porky funny -- but then again: Porky didn't become a very funny character until about 1941 or 1942. Overall the entire story of the cartoon is really meandering where it feels like a completely unfocused plot and even cartoon itself.
Posted by Steven Hartley at 15:44