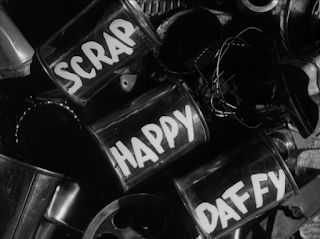 Although the cartoon is showered with propaganda tendencies - the premise operates like a standard Warner Bros. cartoon. Daffy Duck is devoting his time collecting scraps for the war effort; but Hitler attempts to thwart his plans by sending a billy goat to destroy his scrap pile.

For a concept relatively straightforward, Frank Tashlin never shies away from his innovative direction and artistic abilities. Like Porky Pig's Feat, he attempts to give the cartoon a cinematic scope, without losing the entertainment value - a feat he excels at.

The opening sequence is a prime example of Tashlin's attempt to combine entertainment and patriotism fluidly. Daffy's purpose is to encourage audiences in cooperating with the war effort. By doing so, he sings the popular wartime song We're in to Win, and lists out numerous items to be used as scraps.

The sequence is largely informative; and Tashlin compensates this by adding visualised gags - like having Daffy climb the scrap pile, like a mountain. Frank ic bathing suit; acknowledged by Daffy's wolf-whistle.

To enlighten wartime audiences, the Warner staff don't hesitate to ridicule their enemies. Tashlin inserts a visual pun of Daffy's mirror reflections morphing into the Axis leaders: Hitler, Mussolini, and Tojo; as they each yell "Freedom's foe" with their stereotyped accents--causing the mirror to shatter.

Tashlin also applies a hilarious cross dissolve effect to mock Hitler; that is perfectly clarified visually. Once, Daffy finishes his song, he remarks bitterly: "Well, how d'you like that? Schicklgruber?"--the name being a reference to Hitler's father's original surname. The camera pans to the rear end of a mule facing sideways. The scenes changes through a match dissolves to Adolf Hitler reading a newspaper.

Hitler rants in the German tongue, which is comically translated as "Non aryan duck". Hitler's anger goes so far, he ends up shredding his carpet like an animal! And so, he orders for the scrap pile to be destroyed.

This follows into an elaborate montage sequence, of Hitler's officers forwarding the orders: "Destroy that scrap pile!". Tashlin's innovative use of dynamics fits wonderfully. He applies silhouette and closeups of officer's hands; which enhances the suspense. The choices of composition are almost on par with master filmmakers, like Alfred Hitchcock or Leni Riefenstahl.

A standout example of Tashlin's use of dynamics is evident in a shot of the submarine captain. He commands the same order, "Destroy that scrap pile", but the camera pans right across the officer as he points with his finger, to indicate a command. It's a remarkably complex layout; but the animator's use of mechanics produce great results.

Asides from his cinematic techniques; Tashlin's cartoons had strong art direction a lot of the time. The layouts of the cartoon, possibly by Dave Hilberman, follow a graphic, avant-garde approach which the animation industry wouldn't fully endorse until the formation of UPA. Tashlin, and Chuck Jones are notable exceptions in this era. The scrap pile is an innovative design that suggests a constructed look to it.

The background work is very experimental and somewhat underestimated in this cartoon. A lot of the backgrounds are painted in rough form without the use of normal linework, but was applied afterwards. A similar technique wouldn't become popularised until the 1961 Disney feature, One Hundred and One Dalmatians - under the art direction of Ken Anderson and colour stylist Walt Peregoy.

Other creative uses of colour is evident in the sequence of Daffy Duck unknowingly staring at his own reflection in the dark. He mistakes his own eyes for the billy goat, and he holds up a bayonet as defence. He orders: "Put your hands up. You criminals are all alike. I can see it in your eyes. Just a stupid ignoramus. A numbskull. A nitwit. A nincom--"; Daffy strikes a match to realise he's talking to his own mirror reflection, resulting in a late delivery of "--poop".

Once the submarine fires a torpedo directed towards the scrap pile; the weapon opens to reveal a billy goat contained inside. The sequence showcases Tashlin's comic timing wonderfully; such as the action of the goat goose-stepping.

Treg Brown's sound effects are put to great use; like when the goat eats up the scrap pile, in the action of a typewriter. Once the goat swallows a handful of junk, his stomach struggles to fully digest, and he begins to hiccup; which Brown utilises with an effective rumble sound.

Other indications of Tashlin's timing skills is seen during the mallet scene. Daffy has hidden himself inside a pair of glasses, that is portrayed so subtly in animation. The glasses were formed in the shape of Daffy, which the goat ruins by tossing them away.

Daffy's hands arise as he strikes the goat's horns with his mallet. Sheepishly grinning, the goat retaliates by shaking his head vigorously; whilst Daffy is still attached to the mallet. An interesting cross-dissolve effect fits in, where multiple uses of Daffy Duck are used to emphasise his struggle with the goat.

A trait of Frank Tashlin that's most revealing during his 1940s stint at Schlesinger's, was his ability to push poses to the extreme. The effect is applied during the fast-cutting scenes of the billy goat charging towards Daffy Duck. The timing and animation (by Art Davis?) adds a lot of character personality. The speed of the billy goat suggests a disciplined, intimidating mammal; whilst the goat's comical and clumsy skid suggests otherwise.

This is soon followed with a sequence of Daffy Duck, disguising himself as Tojo by wearing glasses and wearing the stereotyped grin: "You wouldn't hit a guy with glasses, would ya?"

Another creative piece of animation that works as a visual gag, is the scene of Daffy's neck peeking out from by the fence. His head pokes out from underneath his combat helmet, as he remarks: "Saboteurs, I betcha!". Only a gag like that could read in animated form.

While the cartoons were plagued with wartime references naturally, elements of cultural references are still blended in. Perhaps this was used to balance out the propaganda. In one sequence, Daffy Duck encounters the hiccuping goat, and attempts to help him.

In an attempt to help, Daffy produces a remedy by placing a sodium pull in a glass of water; quoting "Listen to it fizz" - a direct reference to the Alka-Seltzer advertisement popular of the time. After the goat consumes the drink, his hiccups get more violent each time - leading to Daffy's discovery that the goat serves the Nazis - as indicated from his swastika ornament.

At a moment of defeat from the billy goat; Daffy has an epiphany. He encounters the spirits of his former descendants; who are dressed as American pioneers and historical figures like Daniel Boone and Abraham Lincoln.

Admittedly, it's one of the weakest elements of the cartoon. The cartoon changes in tone and style, from the short's usual brisk pace, to an ending that's over-patriotic.

The descendants encourage Daffy by singing in the style of Yankee Doodle, about determination. Then they all sing in unison, "Americans don't give up!". The line work on the descendants are creative in style, but the sequence itself is rather forced and cliched in patriotism. The majority of the short set a brisk pace style of Daffy Duck's antics with a Nazi goat, with entertaining sequences - but the patriotic scenes of Daffy's descendants feels out of place.

The heavy of patriotism escalates only further once Daffy has an epiphany. He leaps up in the sky, and forms a superhero guise parodying Superman - "Super American". By today's standards, the sequence can be open to interpretation.

One viewer might believe the persona displays a sense of arrogance of the nation - as the scenes emphasise America's power and strength. This is especially evident in the scene of Daffy fighting off the naval officers onboard a Nazi ship; by punching the firing bullets away.

However, it could be seen as a satire on American propaganda; by overcompensating the nation's pride. Preferably, I'd like to see it as satirical. The satire is even more revealing as the scene of Super American cross-dissolves back into reality; with Daffy Duck wrestling with a pipe. Daffy Duck recovers himself after being wrenched by water, gasping: "It was all a dream". But, a camera pans up towards the scrap pile; where a Nazi submarine sits atop. The Nazis yell in unison, "Next time you dream, include us out!". It's a wonderful piece of witty writing that is either open to interpretation or plain wacky.

Scrap Happy Daffy feels more like a patriotic, propaganda cartoon and not so focused in mocking the Axis powers, as evident in cartoons like Daffy - the Commando or Herr Meets Hare. Frank Tashlin at times, uses propaganda cleverly in the short. The opening sequence of Daffy's propaganda song balances comical humour neatly, and the 'Super American' climax is a clever piece of satire on America over-compensating their power through propaganda. The sequence with Daffy Duck communicating with his spirited ancestors, however, is a bit forceful. It feels out of place compared to the satirical propaganda scenes. One could argue it was deliberately written in that patriotic style to build up the hilariously flamboyant Super-American scenes. Tashlin's expert use of applying cinematic techniques,  innovative layouts and the distinctive Warner Bros. humour more than makes up for the little flaws here. 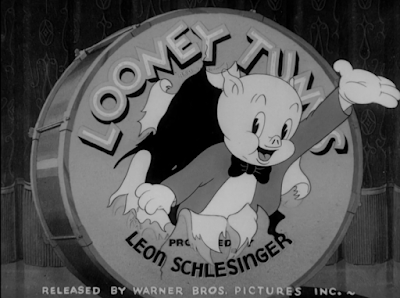