...even if she's as glamorous as Barbara Stanwyck!

Despite the hardships of the Depression, the "screwball comedy" genre typically involved wealthy people who could afford to behave eccentrically. Nothing could be further from the truth in Preston Sturges' The Lady Eve (1941). If you haven't yet seen it, you're in for a great viewing experience. It's an intelligently conceived plot; rich with characterisation, as well as satire and allegory.

The film's sexual themes and gender role reversals have been analysed constantly by critics and film scholars. However, this post's focus is on the animated titles, played at the beginning. In case few of you don't know, the work was sourced out to Leon Schlesinger's studio.

To those who haven't seen the film, it's heavy with references and allegorical imagery to the Biblical story of the Garden of Eden. The snake in the opening titles is a visual metaphor for the respective snake-like personality in the film. For example, Charles Pike (Henry Fonda) is socially awkward who shows an innocent fondness for snakes (whose pet is featured sporadically in the film). It contrasts with Jean Harrington (Barbara Stanwyck), due to her snake-like and deceiving personality, as she manipulates and snags the vulnerable Charles. 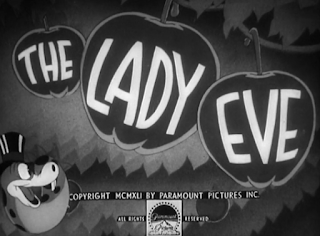 The animated snake slides in and out of the bushes, to grab three large apples to form the film's title. It's clear that Sturges wanted the animated titles to be symbolic of foreshadowing the twisted, deceiving elements that occur during the film. The apples are an obvious reference to the Biblical fable, which is loosely parodied in Eve. 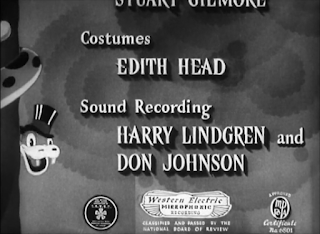 The snake slithers down the credits in a vertical set-up and a simple cycle. Credits include Paramount's most reputable costume designer of that era, Edith Head. The use of maracas as a replacement for a snake rattle is beautifully inventive and true to the screwball comedy form. 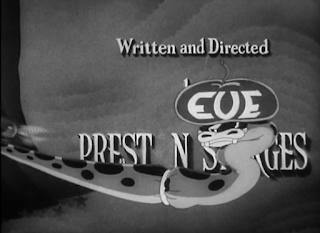 As the snake reaches the bottom of the credits, the apple "Eve" falls and hits the snake on the head, flattening his top hat. The gag is a rich metaphor adding depth to female dominance - a theme carried out in Stanwyck's sublime performance in the film. It also reflects a scene, early in the film, of Jean Harrington dropping an apple on Charles Pike's head, when she first sights him boarding a ship. The magic of Sturges' writing are blessed by such subtleties and connotations, as this.

If I had to hazard a guess, the animated snake strikes me as the work of master animator Bob McKimson. The snake bears McKimson's solid drawing and meticulous timing - especially evident as the snake attempts to pull his top hat up.

For me, the animation credits are a wonderful addition to the film. It enhances mystery and bona fide twists, that are yet to be unveiled. To view the opening titles, click here.
Posted by Steven Hartley at 08:12

Email ThisBlogThis!Share to TwitterShare to FacebookShare to Pinterest
Labels: Additional