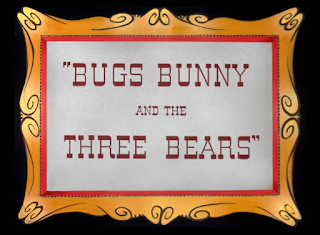 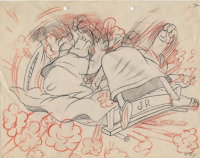 If Disney mastered in evoking fairy-tale fantasy for his features and Silly Symphonies; then Warners certainly mastered in satirising them. Several adaptations had been done on Goldilocks and the Three Bears in animated cartoons, particularly Ub Iwerks and Terrytoons. Tex Avery directed a "semi-epic" version, in The Bear's Tale.

For this cartoon, it's an unwholesome take on the more endearing tale. The three bears are portrayed as a dysfunctional family, each having a distinctive personality and defect. Papa Bear (or Henry) is depicted as the smallest sized of the clan, who bears (no pun intended) a Napoleon complex. Junior Bear is simply an overgrown, differently-abled child (a la Lennie Small), whilst Ma Bear is the long-suffering, passive wife, burdened with a deadpan expression.

The family portrayal is more cynical than the "ideal American family" image audiences might expect to see in a Andy Hardy picture. In this case, the three bears are the kind of family one might find in a rough and disreputable neighbourhood. One could say it's a prototype to the dysfunctional family comedy, long before Matt Groening popularised it in The Simpsons.

The opening scene introducing the three bears living in poverty is pure exposition. Their situation is already established based on their expressions: frustrated and hopeless. This is clarified through held poses for each characters; save Pa Bear drumming his fingers. Carl Stalling's wholesome rendition of In an 18th Century Drawing Room  nicely contradicts the sour atmosphere of the household.

Junior breaks the ice as he wails, "Dad, I'm hungry"; retaliating the abusive Henry to clobbering him on the head, yelling: "Shuddup, Junior! Can't ya see I'm thinkin'?" Already, the audience are aware of how run-down the family are.

Truck in on Henry as he ponders and thinks - (wouldn't it have been easier and less confusing to omit the mouth movement, since dialogue isn't called for?) And so, he pitches his new plot to his family: "Remember the story of the Three Bears? Well, why can't we do the same thing? But when Goldilocks goes upstairs to sleep...WHAM!"

But, Ma informs Henry that there isn't porridge for "Goldilocks" and only a handful of old carrots - a nice piece of foreshadowing on Bugs' part. Infuriated, Pa is forced to compromise: "Well then, make carrot soup!"

This scene, and like so many in this cartoon, suffers from poor assistant and cleanup work. Bobe Cannon's work in this sequence isn't met with justice and it's evident that his work needed a more skilled assistant. For example, the animation of Pa Bear on the table lacks weight and has a floating feel.

The following sequence explores the personalities further, based on how the three bears interpret their line readings during their reenactment of them having carrot soup. In the line: "My soup's too hot"; Ma delivers it in a scatterbrained manner, whereas Henry half-asses his line unenthusiastically. Junior Bear, however, slurps his soup sloppily and delivers the wrong line: "Somebody's been sleeping in my bed."

The timing of Pa hitting Junior with a spoon works to a tee, and the abusive comedy opens for some gag opportunities; which were used several more times throughout the short.

And so, Ma Bear awkwardly delivers her lines, "Now, let's all go for a...walk. And when we return, the--porridge will be--just right." Hysterically, the bears stroll out and back in the house; even putting on a performance that they're a healthy and functioning family. They end the masquerade once they hide behind a curtain under the stairs.

The scent of carrot soup soon lures Bugs Bunny inside the cottage and he starts to guzzle the soups on the table - forcing the bears to disguise themselves as bear rugs. It's a relatively slow-paced sequence on Bugs' part whose calibre isn't fulfilled. The only source of humour appears when Bugs calls for ketchup, and Junior unconsciously walks over to a nearby shelf and passes the ketchup to Bugs. In this case, the humour is coming from Junior, and not so much Bugs.

Ironically, as the cartoon's title suggests, Bugs is downplayed considerably in this cartoon, who functions like a prop. One questions whether Chuck Jones or Ted Pierce wanted to fully explore comical possibilities on the three bears more, but were saddled with Bugs based on the number of cartoons required to make on the studio's most popular star.

This cartoon is notable for its unusual use of long continuous shots - only ten cuts occur through the duration of this short. Was Chuck Jones experimenting artistically or was this an economical practice? After all, his previous cartoon Tom Turk and Daffy is bombarded with fast cuts that possibly ate up its budget.

A fine example of Chuck's long continuous shots is the bedroom sequence, starting with Bugs walking to the room wearing a nightgown, and singing King For a Day. It's a remarkably long piece of character animation tailor-made for Ken Harris, who usually assigned the hardest scenes for Chuck. The scene is 123 feet long, and its all a continuous performance. Surviving animation drawings reveal that this scene was animated in separate levels. Imagine the workload that had to be finished at a set time! And here's the breakdown of the rather long scene:

After Bugs' exit, the bears bump into the door and Pa yells, "Now don't forget your lines!" - followed by another of Junior's comic foils. Like the soup eating sequence, the bears reenact the story up to its point. The bears find Bugs Bunny sleeping in Junior's bed and they pounce on top of him for a beating.

A camera pan, however reveals Bugs to be unharmed. Ma Bear finds Bugs and confronts him, but he bluffs by expressing fake admiration and kisses her - in standard Bugs fashion. It's also the only moment in the cartoon when Bugs contributes something substantial and

Personally, I feel the long continuous action marred the cartoon's pacing in earlier scenes, but it's used effectively and busily for this sequence. It's a stellar performance from Ken Harris, whose work is the cartoon's one saving grace from its somewhat sub-standard animation.

It's clear by the time of this cartoon's production that Bugs Bunny already evolved fast as a character. To resolve the cartoon in a less predictable manner, his wits get the better of him. Bugs' fake flattery to Ma Bear consumes her to blinded affection. She protects Bugs from Pa and Junior, and hopelessly attempts to seduce him: "Tell me more about my eyes?".

And so, Bugs awkwardly tries to back away form Ma's seductive moves towards him. He attempts to turn her down gently, "Now take it easy, you've got me wrong! Just a passing fancy, etc." Blanc takes Bugs into an emotional arc during his dialogue, as Bugs finally has enough and yells: "Stop it! People are looking at us! Compose yourself! Stop!".

It's nicely written dialogue, performed to a fine standard by Mel Blanc, but unfortunately ruined by awkward character animation. The timing of Bugs cringing at Ma's advances towards him, in particular, is executed sloppily and the animation acting lacks clarity. Washam's timing and posing of Ma Bear is frankly not strong, and at times, confusing. Ma Bear comes across as lifeless from her expressions and the surplus of spastic, unrelated movement over Bugs' animation is rather distracting.

The cartoon's ending has the standard pacing and energy of a classic Warner Bros. short as Bugs attempts to escape from the nymphomaniac Ma. Door to door, he finds Ma posing in seductive, saucy outfits. The scene is timed well and Bugs' penetration through the wall is nicely executed.

Bugs escapes safely inside his rabbit hole until Ma's off-screen voice reveals she's hiding inside, once again saying: "Tell me more about my eyes" and kissing him. Mel Blanc delivers some wonderful, hilarious hysteria as Bugs leaps from his hole and runs into the horizon - screaming and panicking.

As entertaining as the sequence is alone, it feels out of place compared to the more uneventful and sluggish sequences seen earlier in the cartoon. Based on Pierce's philandering reputation, it's possible that the ending is a scenario of life imitating art.

Bugs Bunny and the Three Bears is a cartoon I want to appreciate more for its dysfunctional take on the three bears, that definitely had the potential for comedy gold, but it wasn't fully realised in this cartoon. The satire is there, but only marginally. The sluggish pacing throughout this cartoon proved to be a missed opportunity with the concept. The short isn't clear on whether Bugs or the Three Bears should be the focus; when you take into account on how relatively underplayed Bugs is. A healthy portion of the cartoon's gags evolves around the Three Bears, who by far, are the cartoon's scene-stealers. Despite the cartoon's flaws, the comedic opportunities for the three bears wouldn't be missed, when Chuck Jones (and Mike Maltese) would later return to the characters and turn out master-works (i.e. A Bear for Punishment, Bear Feat). 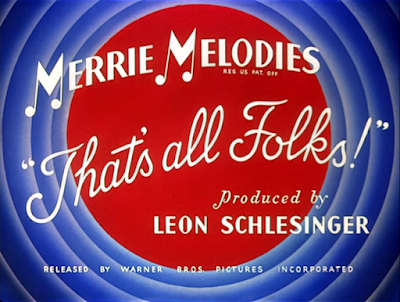