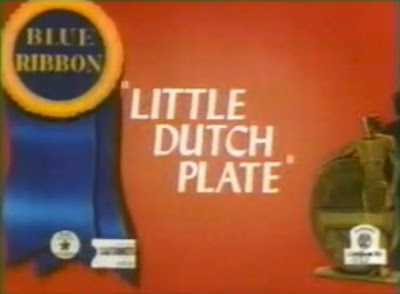 The second-to-last cartoon released before Tex Avery arrives; and let's cope with this cartoon and hopefully find the next cartoon a delight to see. As far as I know Friz Freleng and other directors don't immediately change direction skills when Avery arrives; as it probably takes Friz a year or two to finally improve. 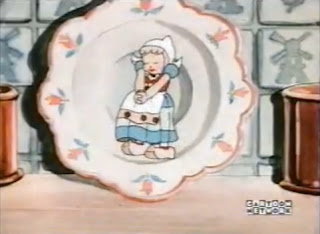 In a small, quiet town in Holland we hear the sounds of an off-screen chorus. The canals in the Dutch town are beautiful looking (if it were real life). We view inside a random house and look at the lovely Dutch plates that are inside. The optimistic voices are singing the song The Girl on the Little Blue Plate which is a different title to the short title, evidently.

The little Dutch girl inside the plate steps out of the plate as she is notices a salt shaker boy who is in love with the little Dutch girl with love-hearts popping out of his minds. The salt shaker boy then walks out of the shelf he belongs and walks along the kitchen table trying to walk in a sophisticated attitude. The optimistic singing comes from the Dutch ladies in the Dutch plates (coloured in blue) are singing the song with the kettle boiling to play the rhythm of the song. 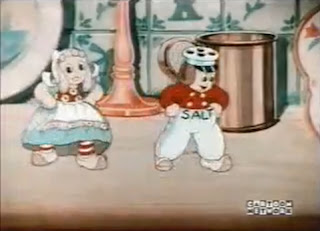 The next sequence is then a clog dance performed by the Dutch girl and the salt shaker boy. The animation of the dance they did is great animation in terms of the movement. They dance around and move around quite a lot (but I wouldn't say it would be loose animation).

Of course; you might think this is just an ordinary dance animated by "some animator" at Warner Bros. but as far as I know this is believed to be animation done by legendary animator Ken Harris. Greg Duffell (who probably knows about Ken Harris more than anyone else) told me that Harris got his breakthrough in animation with Friz Freleng and wanted to prove Friz he could animate; and Friz gave him a test scene on this cartoon to animate the clog dance. Friz was impressed and Harris was animating since then; but probably didn't join the screen credits list until 1937. Is there a source to back this up since this is coming from Ken Harris' words. Yowp? David Gerstein?? Anyone? 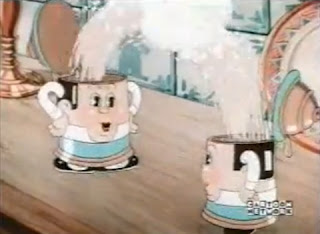 Two beer jugs with faces carved and painted on them join into the dance (at this point I don't know if this could still be Harris animation). The mugs then swap different swishes of beer to the other. More inanimate objects start to dance such as a pair of suspenders dancing with wooden shoes.

The next dancing sequence shoes blue Dutch ladies inside the dishes moving the dishes and they are sliding it in different positions. The gag at the end shows the Dutch ladies doing a hatstand at the end with their different types of blouses showing - and then they continue to dance off. I really don't know if that could be a Harris scene as well; in fact I don't know if he did the whole sequence. The Dutch girl and the salt boy dance off the lengthy dance sequence (probably Harris). 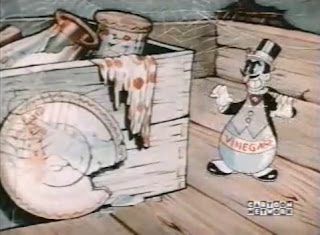 A vinegar bottle who is rather evil-looking with the villain's mustache; wearing a tuxedo and top hat. The vinegar bottle walks through the cob webs that was blocking his way and looks at both the Dutch girl and the salt boy in an envious, angry attitude. 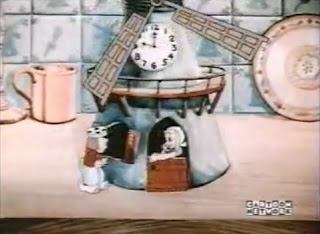 The vinegar bottle seems to be even more annoyed or jealous as he appears to admire the girl himself and wants her to be his lady. The vinegar bottle walks up to the Dutch boy and girl and their song is interrupted. 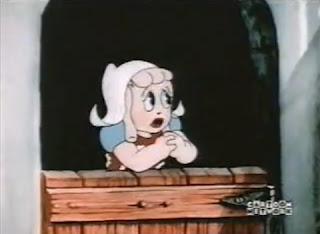 The vinegar bottle is singing to the Dutch boy and girl as he is holding out a mortgage paper that they are very low on their mortgage. It's hard to hear what the exact words are but I think I can grasp what it is. He seems to point to them that they have until 12 o'clock to pay the mortgage of the windmill or out they go.

Just a darn minute; since WHEN was that their windmill??? The girl was living in a plate and the salt shaker in a damn shelf the whole time so since when have they lived there and ran low on their mortgage; they would've lived there for a while for that to happen. This doesn't make much more sense to me. Anyway; the vine Dutch girl pleads the vinegar bottle to give her a "little more time" as she "hasn't got a dime" I think she is saying. if she's saying "dime" do they EVEN have dimes in the Netherlands (before the Euro currency came)?? This feels unrealistic for a Dutch setting. 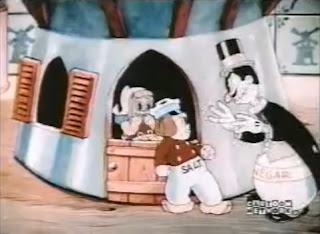 A cuckoo clock strikes with a cuckoo shouting that the sound of the bell means it will be 11.30. The figure then whacks the cuckoo which is the sound; to and it means they've got only half-an-hour left to pay the bill. The salt shaker boy promises to save the mortgage for the Dutch girl so she doesn't have to be married to the vinegar bottle man who used her to get married because of short mortgage. Now WHAT a rotten trick. The salt shaker boy walks up to the vinegar declaring him "You old meanie!" but the vinegar razzies him out of the scene. Looks like this villain is more cunning than the other ones since he's the landlord and comes up with an idea to marry the Dutch girl (which he wants to do) if she doesn't pay the mortgage. 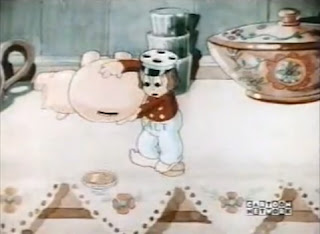 The time starts to fly very fast and it's already 12 o'clock and the cuckoo flies out with a figure banging the cuckoo and changes the time to 11.30 to give the salt shaker boy more time to pay the mortgage.

The salt shaker boy has been walking in circles for a long time but notices a piggy bank. So, he HASN'T noticed that piggy bank all along. Stupid. The boy shakes the coin out of the piggy bank which is only a penny which is useless and throws it away. THROW IT AWAY? Hasn't he even heard of the saying "every penny is worth"? 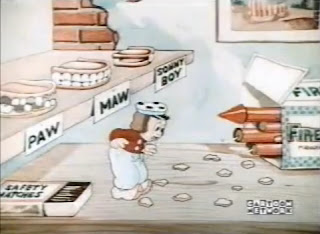 The Dutch girl is walking around in circles with the vinegar bottle self-satisfied as he looks at his pocket watch hoping for the salt shaker to never return. The Dutch bottle then looks at some objects that amazes him in which he is going to use. Instead of paying the mortgage which is hopeless; he seems to plan on killing the landlord. The salt shaker grabs out dynamite and places it on false teeth hoping for it shake out; but as it explodes. It doesn't work and only pieces of false teeth fall out.

The cuckoo clock comes out and gets whacked again (which appears to be the recurring joke throughout this cartoon) and the time is taken back to 11.30. The landlord looks at the time and convinces the Dutch girl; "He won't come back he never will; marry me and save the bill". The Dutch girl stomps her feet shouting "I hate you" three times. The landlord grabs the Dutch girl but she kicks him in the face. 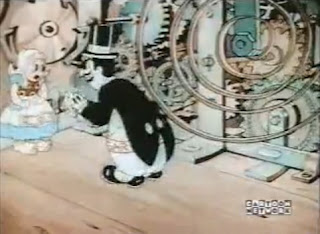 The landlord is furious as he has had enough of the behaviour of the Dutch girl as time has already ran out but he takes her inside a grandfather clock. The landlord then shouts "Now, you'll marry me" in which the Dutch girl still rejects.

Meanwhile the salt shaker boy has finished picking up the pieces of the false teeth lying about and places them in the sack. I imagine that he's going to fake it as "money". Back at the grandfather clock the landlord has already tied up the Dutch girl onto a log that is being cut by a table saw. The salt shaker boy then  approaches the windmill but can't find anyone inside there (not even the landlord or the Dutch girl). 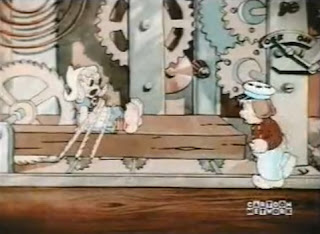 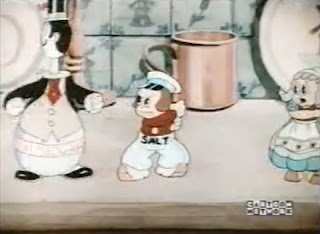 The final parts is probably the highlight of the cartoon and makes the gags work; and proves the hero doesn't always win. The headless vinegar bottle is looking for a head but finds one out of another vinegar bottle and it has a handsome face. 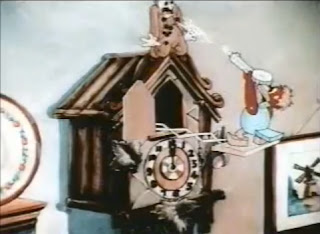 The next shot of the cuckoo clock the cuckoo pops out but turns around with his quick reflexes and shoots the figure on top until it dies. Now that is something which was probably hilarious at the time and it would be funny today as we didn't expect that to happen; and at least this is an example of Freleng coming up with better ideas in cartoons. The cuckoo continues to cuckoo continuously and... 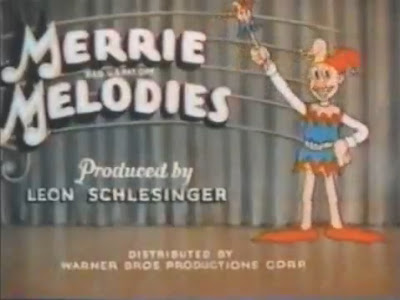 Overall comments: It was interesting to hear about the "claimed" Harris scenes in the dance sequence  whatr Ken Harris mentioned and it could be true. This isn't a really good cartoon itself but it saves the cartoon with gags and they do work that scene of the cuckoo clock shooting the figure was probably the highlight of the cartoon but I wonder if that was ideas from Ted Pierce? Of course; Billy Bletcher does the villain voice and don't be annoyed by the usual casting because he was the main "villain" voice actor of the 1930's and 1940s.
Posted by Steven Hartley at 11:00