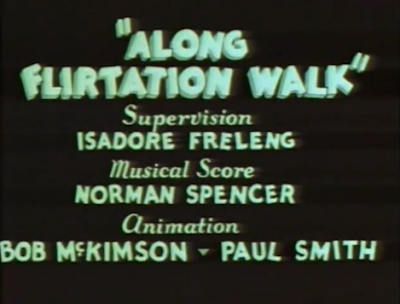 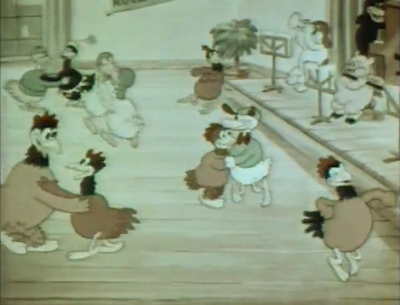 The cartoon begins with outside a college with the sign reading Plymouth Rock College and inside the college it appears to be packed with dancing going on. We zoom in for what we see is a poster that reads Tonite Dance and Rally for Big Game Tomorrow - Boost your Team. Mmm, I guess that it means they're having some celebration before a "big game" to take place tomorrow. We see from the windows are these silhouetted birds dancing inside the hall to popular music. Inside the hall are these different type of birds dancing.

Yep, they're dancing - alright. But the dancing isn't very special. I mean - they could've got something entertaining but instead the ducks and roosters are too human for that (no offense to Daffy Duck or Foghorn Leghorn at all). The roosters have then finished clapping as the song has finished. The next part shows these group of ducks who are wearing a jumper with each duck wearing a jumper to feature two letters to make the overall shirts put together in order reading "Glee Club". The ducks are then singing the the title song, Along Flirtation Walk. 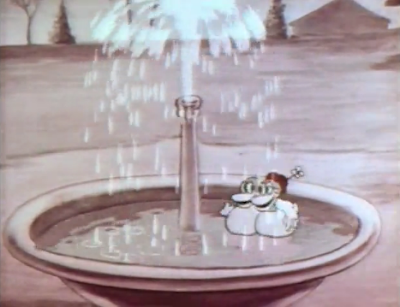 The next shot shows us another part of Plymouth Rock College in which it's called "Flirtation Walk" - which I guess is a type of park for flirtation and romance. There is a shot of these two peacocks sitting on a bench looking at each other lovingly. They don't want us audience to look at them (well - who would?) and they use their peacock feathers to cover themselves so that they can't see. The male peacock then turns to us audience sticking its tongue at us with that very funny sound effects. Come to think of it - was Treg Brown already around that this time the cartoon was made?

The next part then shows us these two ducks bathing together in a water fountain of love. There is another chicken in the background sitting on a bench rather lonesome. The lonely chicken is watching the two love-ducks together and that they are at the top of the water fountain. The "Glee Club" ducks have then finished their singing for the title song as the night has finished. 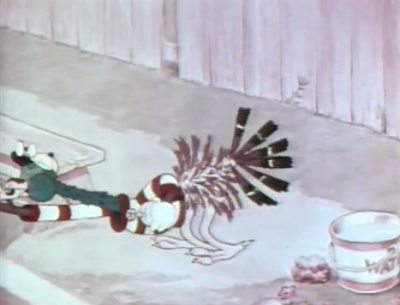 Our cartoon begins with the college stadium the next day - and the whole stadium is full of excited crowds. The orchestra band are ready themselves as they are waiting for the big game. Mmm, so does that mean they're going to play like some type of American football? The players wearing green jerseys walk out of the locker rooms to walk into the field while the rival team in red jerseys walk out in the other end of the locker rooms. They are all getting prepared for their exercises. Meanwhile; the chicken referee then starts to blow his whistle in which the animation is pretty exaggerated that the feathers are sticking out.

All of the chickens are then sitting in their chicken's nest. The chicken captain of the game then starts the game - and it turns out that the red and green team are on their nests trying to lay as much eggs as they can so that to see how many points they can score. WHAT?! That's the game?! Okay, I know that if the chickens played American football would be lame but THIS is worse! In fact - it's really tedious to watch. Apparently the red time are winning with their so far score of 41 points. 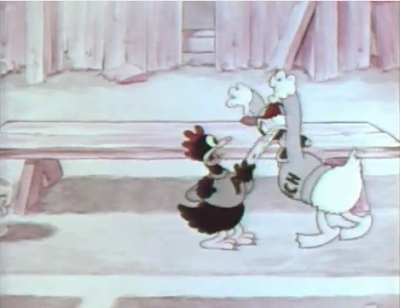 Meanwhile the green-jersey coach is walking around with his pipe probably worrying. The lonesome black chicken (who is probably a substitute player) asks if he can point the join. It's sort of hard to tell since that they're not speaking English and that you can only tell by hand gestures. The coach refuses by trying to scare him away I guess. As there is a break in the game - it turns out that Rhode Island Red University has 75 points while Plymouth Rock College is only scoring 30. The Rhode Island players are walking into the locker rooms self-satisfied, while the Plymouth Rock players are walking with their heads down depressed as they lost a game.

They then walk into the locker rooms all rather glum and upset. The coach who is puffing his cigar all the time looking at his team in a very disappointed manner until he starts to quack at them. Meanwhile, inside the other locker room there is some happiness going on from the red team and it appears to be that they are swallowing snooker balls - is it because they plan to cheat or something? The break has now finished with more band playing continuing and the teams are stepping out of the locker rooms. 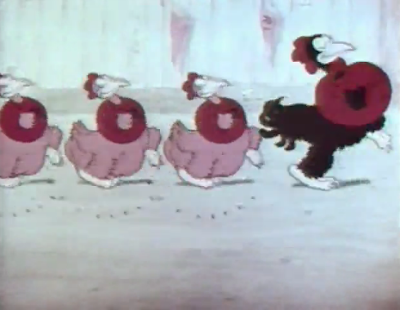 As half-time is over, the red team walk with their bodies covered in snooker balls that they swallowed. The green team walk out with an envious look that shows that they will try and defeat the red team - no question. The second part of the game is about to begin; and the red team are just dropping down snooker balls disguising them as eggs - but for some reason the snooker balls are shaped like eggs. The green team are still struggling as one of the eggs is already hatched with chicks going out. The referee blows the whistle and counts it as a penalty. The points for "Rock" college are lowered to 40. That is even more bad news for the team. 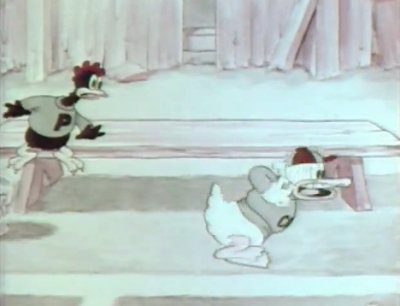 The duck coach is still walking up and down still worried whenever or not the team will do badly. The outcast chicken is still trying to persuade the coach to join the team but the coach refuses, still. The coach hears the whistle go in which the coach reacts with fear. He looks at the signs of the scores; and notices that the sign reads "5 Minutes to Play" - and that Plymouth Rock College are still at 40 points while Rhode Island Reds are WAY ahead with 98 points. The chicken then asks to finally try to join into the remaining 5 minutes of the game in which the coach grudgingly accepts. The lonesome chicken then manages to hatch so many eggs in that 5 minutes that the score is so close between 99 and 100. 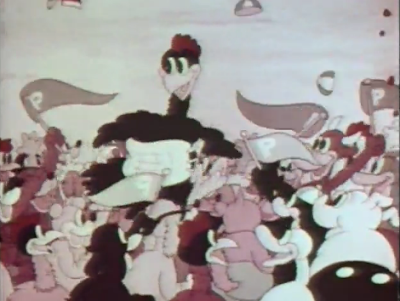 At the game has only about 5 seconds left - the chicken is being pushed by other chicks by being squashed by a girdle. Two legs then fall down in which the score is left to "101" to Plymouth Rock and "100" to Rhode Island Reds - which means that Plymouth Rock have JUST won. The lonesome chicken is now very popular for contributing to most of the eggs, so he gets most of the praise - and that's all folks.

The two-strip Technicolor process in there is really off-putting to look at and it looks rather close enough to black-and-white to me. I don't think this copy is from tape. I really dislike that idea for the "big game" to just show many eggs will be placed in for the scores - instead of some American football game. That is just kind of insulting in a way; laying eggs. A very tedious idea, too. I didn't like the overall cartoon at all as it was bursting with blandness of the animation; and that considering that the characters don't speak English - and just clucking a lot. I mean; how are we supposed to figure THAT out.
Posted by Steven Hartley at 05:24