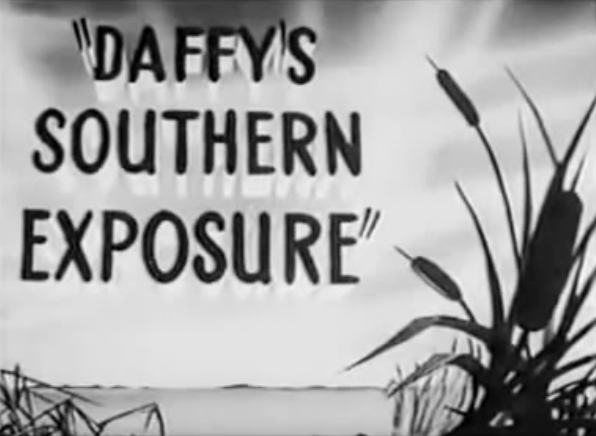 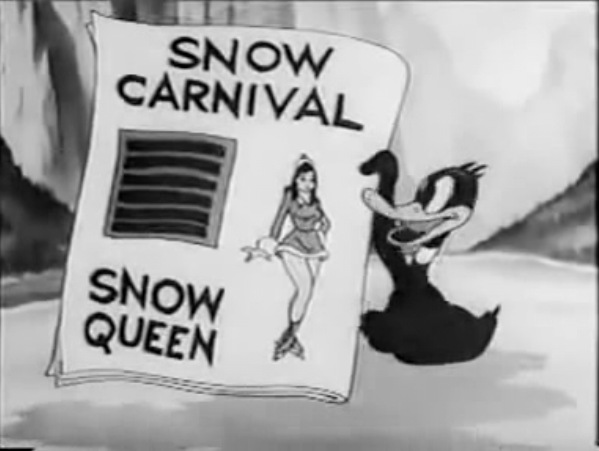 This is perfects the first Warner Bros. cartoon where Daffy's personality has been perfectly finalised. He is goofy, but he's also quick-witted and cynical. This was the standard persona for Daffy, until Chuck Jones tinkered with the character in the 1950s, refining his personality once more. 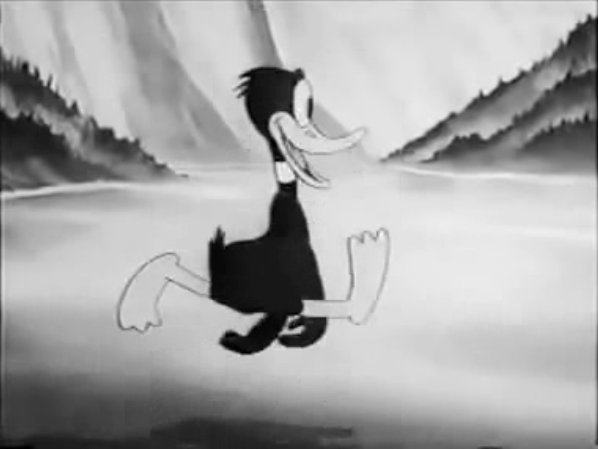 McCabe's interpretation of the character is wonderful. It's perfectly interpreted from the cartoon's opening, and he successfully carries that throughout the cartoon.In this cartoon, he establishes the fact that Daffy's a duck and not just an actor in a duck suit. His established scenario is in a lake, living like a duck. Daffy doesn't see the reason to travel south for the winter:

"Confidentially folks, I ain't going south for this winter. I'm gonna stick around and check up on this winter business!". The charm to Daffy's taste of lust is icing on the cake, as he reveals the front headline of the newspaper labelled "Snow Carnival" with one of the prime features being the 'Snow Queen'. He sees the advantages of remaining south by inheriting the lake on his own, while the other ducks have migrated south for the winter. This leads to Daffy doing a comedic dance around the lake. 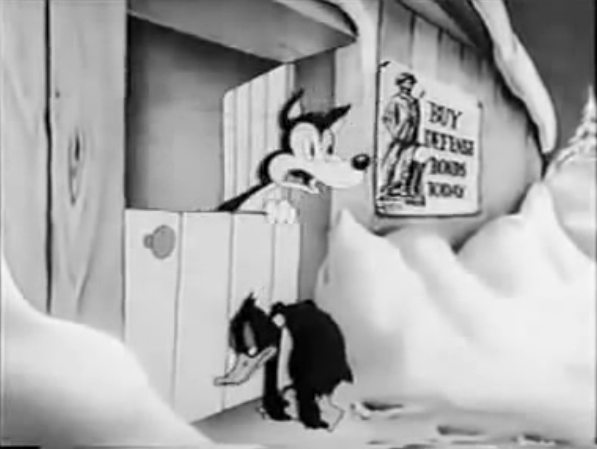 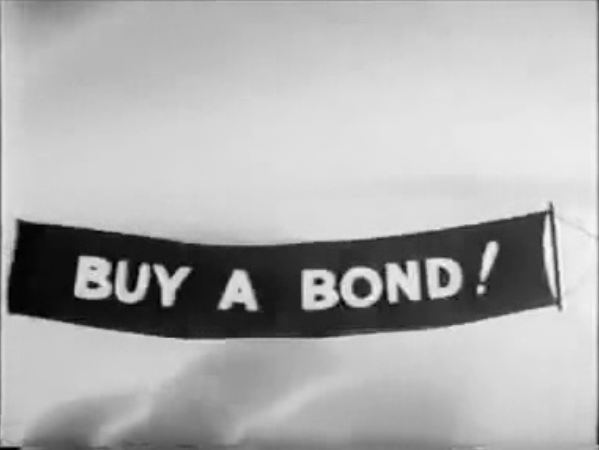 As America had entered into World War II, propaganda was being portrayed everywhere in the medium, even animated cartoons. The Warners crew would have to throw in a propaganda scene to fit into the short, such as the scene of the birds flying south. The birds carry out a banner reading: "Buy a bond!". You can also see it in the shack scene where a fatigued Daffy knocks on the door, but it's more subtle than that. McCabe appears to be finger pointed for using the most obscure references in his cartoons, like the bond reference; even though he wasn't the only one plodding them into cartoons. 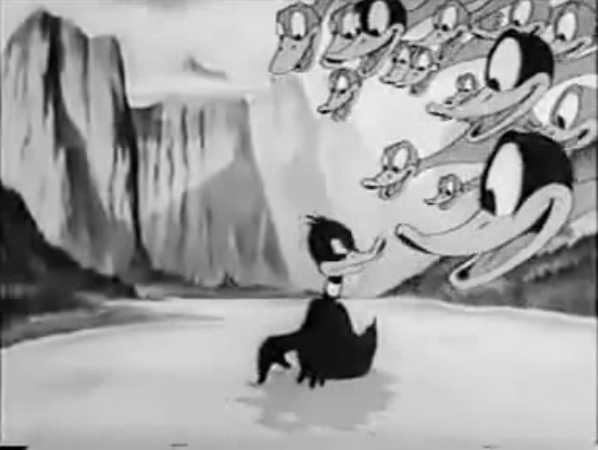 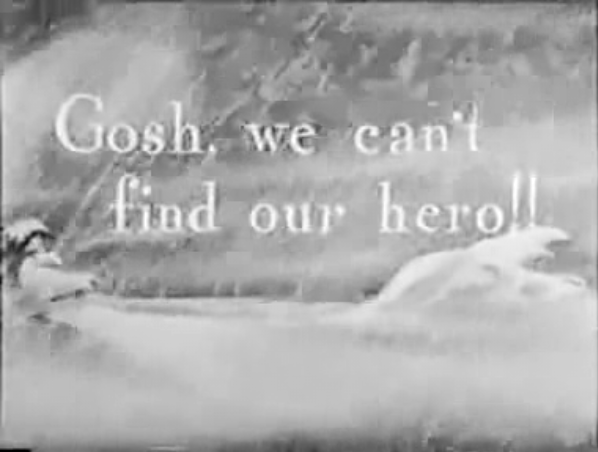 He does maintain gags which would be used from any director, partly in the scene where the group of ducks contradict Daffy's remark about saying south as they quote, "You'll be sorr-ee!"; referencing the game show: Take It or Leave It.

His own style of humour is evident during a blizzard sequence, where he satirises narrative titles which used to be displayed in old live-action movies, mainly in scenic shots. In this short, the title card begins with what audiences would expect: "Thru wind and snow / at thirty below / we find our hero" with each verse written in rhyme. The camera pans back and forth several times, until a narrative appears: "Gosh, we can't find our hero!". This is a greatly executed gag that shows McCabe can create timeless humour in his cartoons. 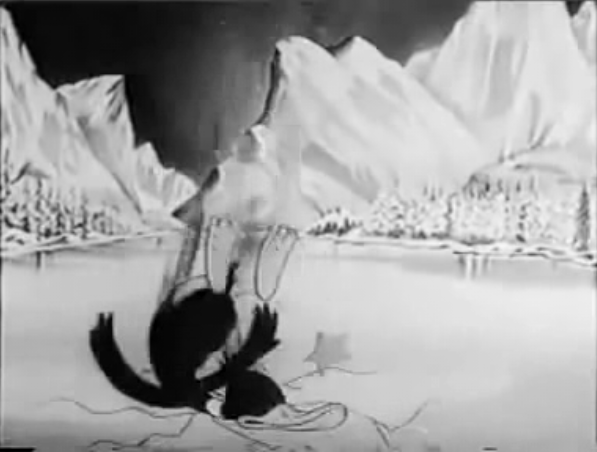 Then there is a kind where McCabe has his own different tastes of timing. It isn't like Freleng's or Clampett's, but its unique on so many levels. This is noticeable earlier in the film where Daffy takes a big leap and prepares for a big dive in the lake. 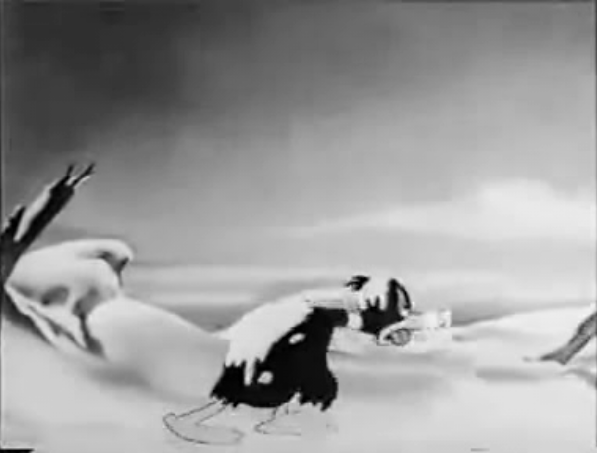 Just as Daffy is about to take a dive, the scenery of the mountains and lake flicks quickly with the sky turning to darkness, and everything turning into ice; leaving Daffy to crash on top of the lake. 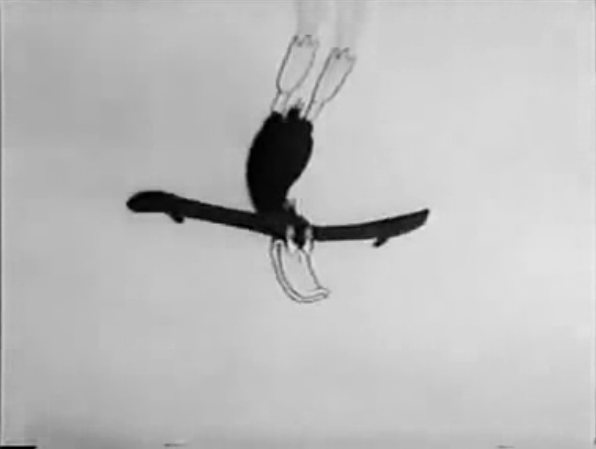 This isn't easy to achieve, and McCabe could be very daring at pulling off aspects of timing like this, and he meets the goal well. During the blizzard sequence, we find that Daffy Duck is stranded in the blizzard unable to be seen.

McCabe relies on a lot of snow effects animation for the shot; so the gag is that Daffy can be unseen, but only heard, facing starvation. He cries out in the blizzard: "I'm starving. Nourishment!", "Oh sustenance! Oh sustenance!". At that point, Daffy breaks the forth wall by having his head break through the storm directing the audience: "What'ya laughing at? I'm really hungry!". This is a funny crack from Daffy, considering that Daffy's sudden appearance and remark is unpredictable. The opaque snow effects adds to the gag to a tee. 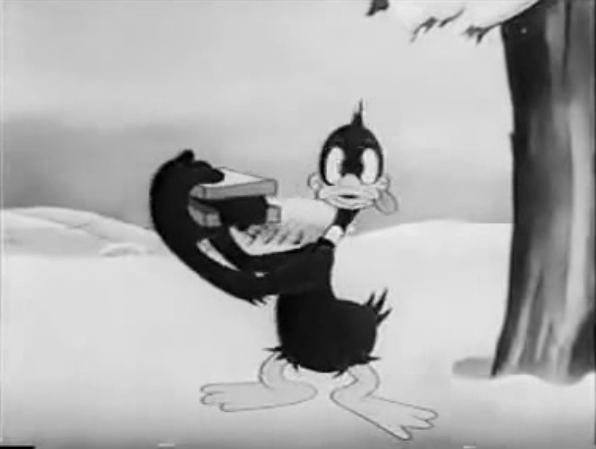 During the blizzard sequence, this leads to Daffy hallucinating as he imagines a winter tree being a T-bone steak, leading him to lick the tree. This leads him to almost eating himself as he pulls the some barks of the tree and uses his hand to make a sandwich ("Yum, yum! Hand sandwich!"). 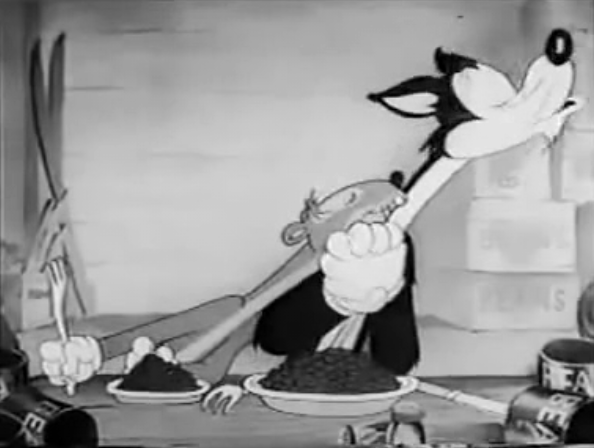 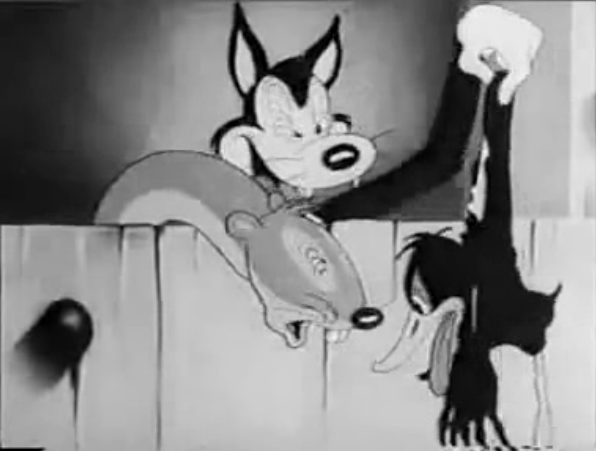 The scent then leads him towards a shack where the villains of the short are introduced: a weasel and a fox. Storyman Don Christensen relies on exposition for the two characters, who are fed up of being consumed of only baked beans.

The pan shot of the interior shack is great for creating domestic problems the characters are facing: the house is stored almost entirely of beans. The wolf complains about the consistency of beans being eaten every breakfast, lunch and supper. His alley, the weasel is portrayed as a silent character. Then he begins to crave for a "roast duck". The wolf begins to reminisce with desire: "Oh, for that fowl taste that my mouth wants". At that moment, they hear Daffy's knock on the door and lead him inside the mouth to create a diversion. 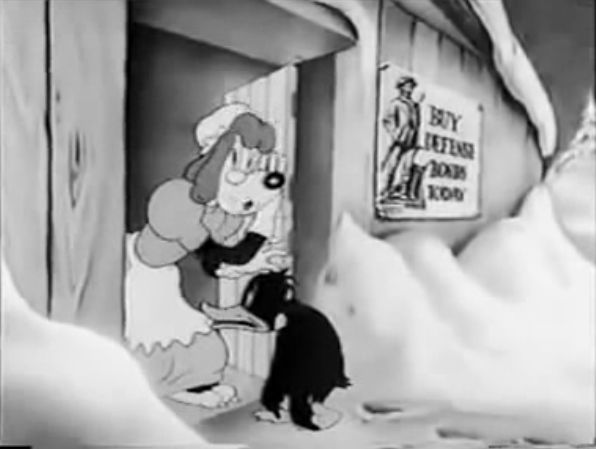 The sequence of the wolf and weasel is disguising themselves as maids is great satire on the villain's supposedly cunningness. The wolf's cutting remark, "Dear dear, who have we here? As if I didn't know" is greatly executed by Blanc, whose falsetto voice is always the charm. The double take where the wolf remarks, "What is your poison? (clears throat) What would you like to eat?" is also great in establishing the villain being a amateurish one. 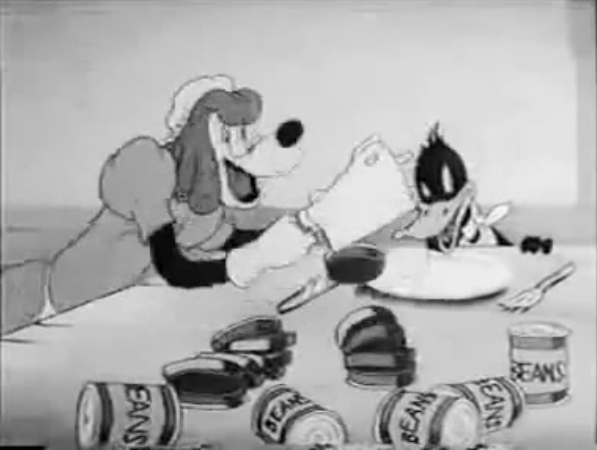 The sequence only gets better during the spoof of The Latin Quarter number. The wolf masquerades himself as a maid and pretends to provide some food for Daffy. Unlike many cartoons of that era which featured pointless song numbers for commercialisation, this sequence is all parody, and it's brilliantly executed by McCabe's timing and wit. 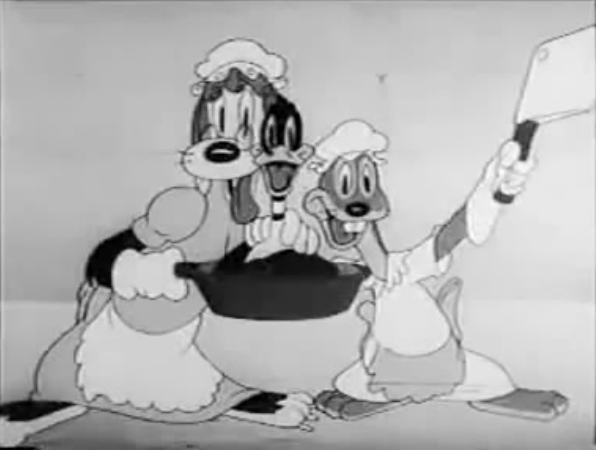 This was where the Warner directors actually got it right, by parodying the lyrics of a popular song so it can blend in with the cartoon's activity. McCabe also establishes that he shows skills in creating musical number sequences, and the scene is almost on par with Friz Freleng's great musical sequences.

The wolf's singing and picking up the cans is perfectly synchronised in humour, that it becomes a gag itself. It's also wonderfully executed during the scene where he is cutting the cans into slices, but he does it in sync to the melody. The weasel and the wolf also have to maintain their plan to boil Daffy while singing their song; which isn't easy to achieve in musical sequences: as there's a lot of activity going on. 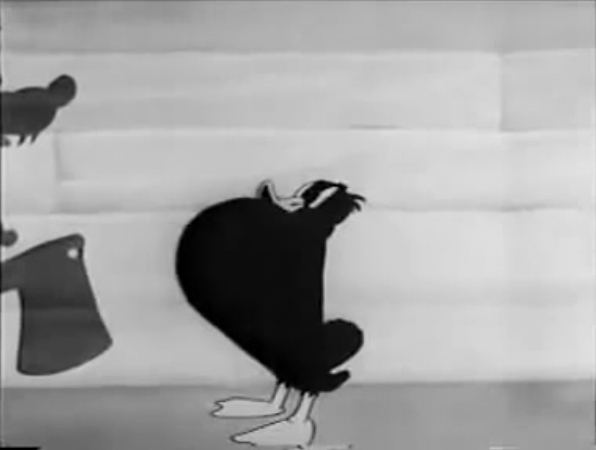 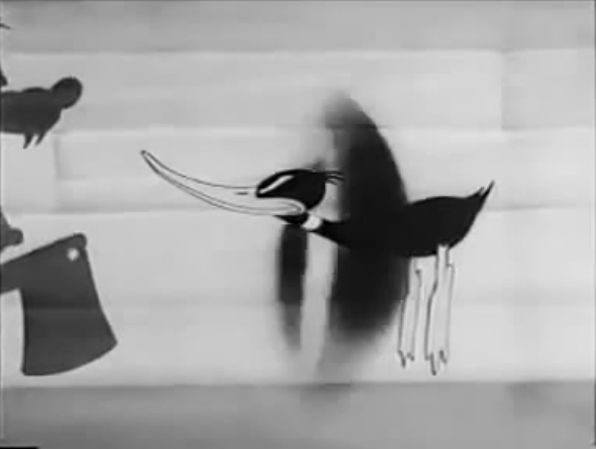 Upon realising that Daffy is targeted to be slaughtered and eaten, he leaps to his own hopeless defence. To add to the suspense and drama, the use of silhouettes helps convey how menacing the wolf is. To make the scene humorous and suspenseful, Daffy attempts to convince them not to cook him. He pleads: "You don't want to eat me. I'm not a duck, I'm a pigeon", and he attempts to pull off these disguises, by impersonating the figure of a pigeon and a hummingbird. This is greatly conceived to express at how useless Daffy's alibis are in such a perilous situation. Mel Blanc adds a lot of character to the panic-stricken Daffy, especially when he is hopelessly impersonating a mockingbird, which Mel captures in keeping character. 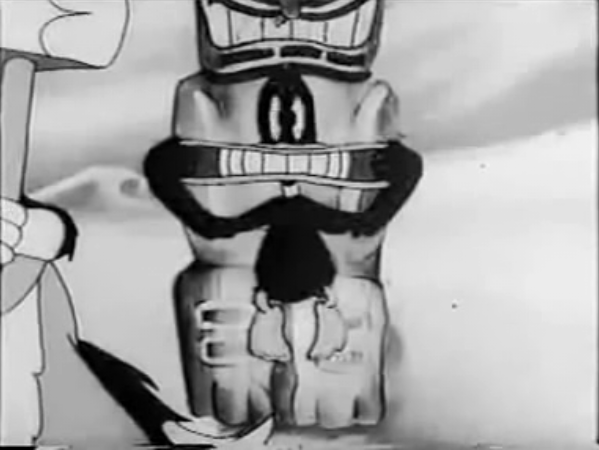 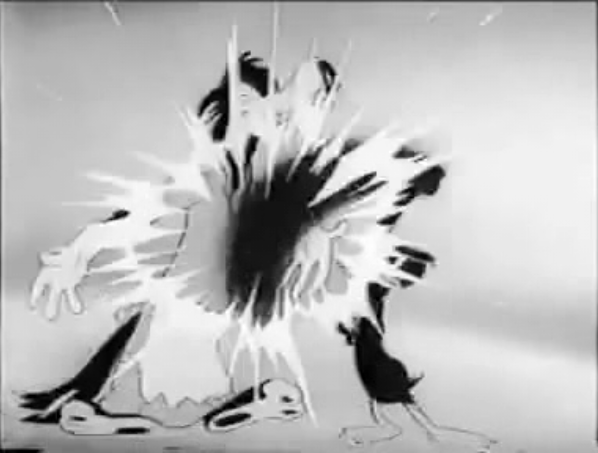 Resulting in a typical chase scene, McCabe makes the chase a lot of fun too. To start, Daffy hides to a nearby tree. Just as Daffy reaches the top of the tree trunk, he encounters the wolf. The gag of the wolf frantically chopping the tree trunk into a totem pole is corny but it works on its own. Daffy's pose on impersonating a totem figure adds to the charm.

Midway a chase scene, Daffy breaks the action as he addresses to the wolf: "Just a minute, bub, just a minute!". At that point Daffy socks the wolf's chin and zips out whooping. This is He disposes of the wolf as he pulls the lead from a log, which leads the wolf to slip off the other side, and to fall a long height. 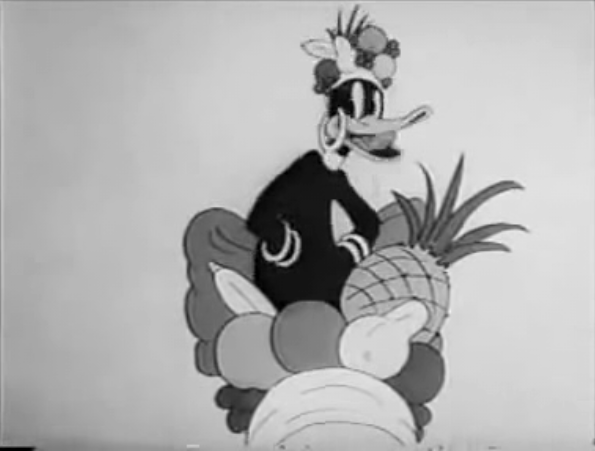 From the perilous situation he has faced, he immediately flees south from all signs which point down to south. Each different shot of the signs pointing south emphasises on the journey Daffy is travelling. The first shot is still set in north, the following in an American desert, and the last being a tropical place; where the sign emphasises the direction is south: "and we do mean SOUTH". We then fade to a shot of a Carmen Miranda caricature doing a dance, and we find Daffy living on top of her fruit hat. He has the last laugh and line, "Geez, I like the South American way. And I do mean South".

For a director who has a reputation of producing dated, wartime material: this cartoon clearly contradicts his reputation for he was perfectly capable of producing original cartoons in a cartoon world. McCabe is not afraid to explore anything ambitious for animated cartoons, such as a style of comedic timing which is hard to pull off. For a director who is very underrated, he definitely had style.  Norm McCabe nailed Daffy Duck's personality to a tee. As a character he is a lot more refined than his previous appearances. This short was made at just the right time, as the writers were producing much more funnier cartoons with energy and character, and this cartoon happens to be an example of what started the trend. 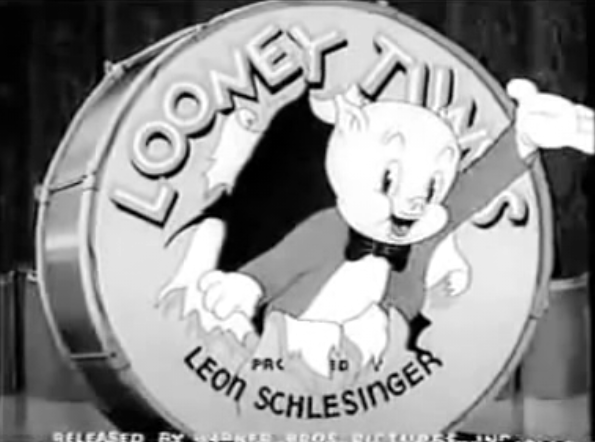