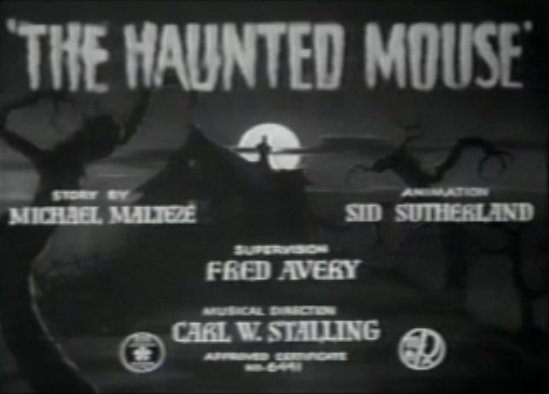 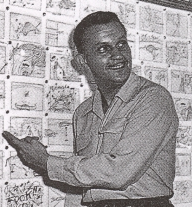 What perhaps most Warner enthusiasts have been hoping for, the first appearance of Michael Maltese, whose first writing credit appears in this cartoon. He is, without doubt, the strongest writer at the studio, and quite possibly the greatest cartoon writer whose lived?

He was excellent at using play-on words for strategy sequences, creating very human and believable characters in his writing, as well as writing excellent stories, period. Who else would create a bizarre but tour de force ending of the Father's Day presentation in A Bear for Punishment, or have a singing cat alley pester an annoyed Porky or Elmer in Back Alley Op-roar/Notes to You, and a whole lot more.

Maltese spoke about how in his early years in the Story department, he had been rejected by his gags from the "Kansas City boys", especially Bugs Hardaway, who claimed Maltese wasn't contributing material. I'd be curious whether Maltese wrote the story himself, or if this was all contributed with several other story men.

Not to mention, Leon Schlesinger was also becoming more relaxed with the system between the shorts, and thus allowing the directors and artists to show more creative freedom. Porky no longer appears in every black and white Looney Tunes short, whereas other directors are given more fresh freedom by directing one-shots as well as Porky cartoons, without having them being forced to Bob Clampett, who also would produce a few one-shots this year.

It's fair to say that by around late 1940 as well as into 1941: Tex Avery had started to gradually started to turn out more fresh shorts, rather than relying on spot-gag cartoons, which had been his standard trademark around 1939 and 1940.

I suppose the success of Bugs Bunny would have inspired Tex to produce more Bugs shorts, as well as creating alternate characteristics, but this short is a slight different turn for Tex, especially for Warners.

As mentioned in the synopsis, the plot of the short is of a famished cat who ends up being heckled by a spirited mouse, possibly due to subtle hallucinations. The concept as well as the plot itself feels like a entry that Tex would have produced in the late 40s at MGM, when he started to produce more bizarre stories and not relying too much on parodies on a certain topic, or especially spotgags. No doubt that Tex always used parody and spot-gags throughout his career, the short itself feels like he's paying homage towards the earlier bizarre and entertaining stories he turned out in his earliest Warners shorts.

You could also say this was one of Tex's shorts where he was attempting to create several more wisecracking personalities who outwit their nemesis, like Bugs. Previously he used the fox with a Bugs personality in Of Fox and Hounds, and would not long use the same persona in The Crackpot Quail. Hell, he has the early Bugs persona, where he kisses the cat in the lips, shouting "Guess who?".

You would say it is featured with the mouse, but the mouse is more of a menace than streetwise. He does have the streetwise personality when he gives the cat a spirited bowl of cream (which vanishes) and then starts to trick the cat, after he complains of an empty stomach, "I was sure hungry for that milk, 'cos my stomach's empty!", in the sequence animated by Scribner.

The sequence itself feels it shows some minor Mike Maltese contributions, especially with the interactions as well as the dialogue, "Holy cats, it IS empty!". Though, despite perhaps being a type of Bugs Bunny personality, the mouse is missing the streetwise Brooklynese voice by Mel Blanc, as the voice actor is Walter Tetley. Tetley, who was a child impersonator actor is mostly remembered for Sherman in The Rocky and Bullwinkle Show as well as Andy Panda, doesn't sound too ideal for the role as it feels the personality would be better off as an assignment for Blanc, though that's just personal thoughts.

Also note the use of double-takes that is featured in several of the sequences, and double-takes have been a prime formula for Maltese in gag setups (not only cartoons in general), and perhaps his contributions are evident for those sequences.

Excluding the double take in their first encounter, two prime examples appear where the dumb cat is seen yelling through a mouse hole at the cat.

The spirited mouse shouts out, "Hello jerk" which causes the cat to retaliate and ordering the mouse to step outside. The spirited mouse reappears and yells back, trying to fool the cat as well as to get the audience laughing. Another sequence is also evident where the cat, believing he has caught the mouse in his paws with the spirited mouse inspecting. Note the scene is one long shot, where two pieces of action appears at once. It both works off well in terms of delivery though the timing is quite slow, with not too much energy.

With a few contributions that feel more or less like the works of Maltese, the rest of the sequences just appear to be more or less of Tex's own contributions as well as his own gags, which show a lot of comic movement, with Tex taking advantage of some invisible gags. One of the more funnier and humorous gags appear when the cat can be seen tickling the cat invisible, and ends up breaking down with laughter.

Then with the more visual gags, this appears where the mouse grabs the cat's tail and then kicks the cat in the booty, at least how it appears to look on screen. A similar gag Tex would have used in his MGM cartoons, but the action as well as the timing is mild compared to what he could achieve.

With more fun from the haunted mouse as well as more Tex contributions, a typical and predictable hotgag then turns up, which is quite possible one of the oldest gags in general, like the banana skin. This then ends with the cat yelling in mid-air, though like the reaction better in Of Fox and Hounds, which showed great timing of the shock.

Despite having particular gags through the short that aren't too satisfying, by having gags that don't feel too greatly timed, as well as a lot of talkie scenes, it ends in a satisfying albeit dark matter, which is definitely what Maltese would have contributed to.

The cat dies, and becomes a spirit like the mouse, which therefore makes him a threat. Since the cat was not a threat to the mouse, having the cat die like the mouse becomes a lot more fulfilling as a gag, ending with great justice. This then leads the cat to abandon the ghost town, by changing the population name of the sign from '100' to '99' with that Tex-oriented gag.

And so, The Haunted Mouse feels more of a Tex product than it does with Michael Maltese's own contributions, at least in terms of story. The gags themselves appear more of Tex's own contributions whereas with Maltese, parts of the dialogues as well as building up to a factor would be his. Though, Tex being the director having a lot of control over his pictures, it would make sense a lot of contributions of the short were his own. By the time the short was released, did the story credits still get rotated or was Maltese actually assigned to the short? I suppose it is hard to tell. You can read more about Maltese's view on Tex in an interview in Tex Avery: King of Cartoons, by Joe Adamson, as well as Hollywood Cartoons. Overall, the short was average as a typical Warners viewing, but it was also a decent step for Tex as he is building more and more fresh material as well as more bizarre and funnier concepts. 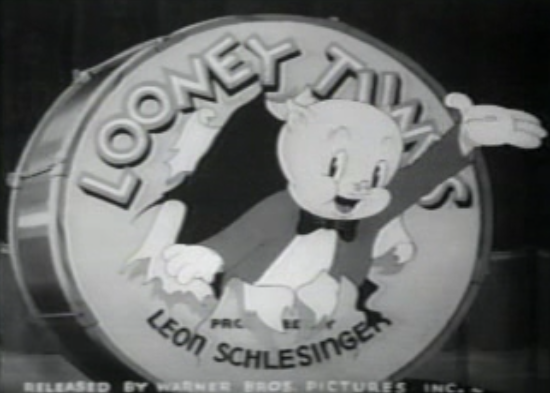