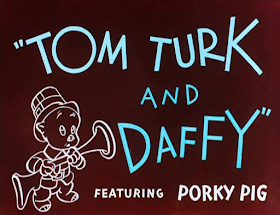 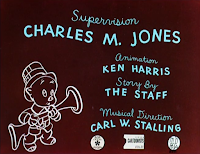 Before I commence with the review; I'm not going to theorise too much on the story credit for this cartoon. The context of "The Staff" credit has been forgotten overtime; much to the chagrin of some cartoon fans. Don't take my guess for granted; but I believe it was simply a joke by the Schlesinger crew. After all, would 1944 audiences really care on who wrote the cartoon? 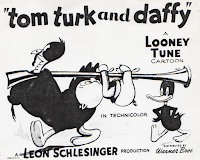 If I had to pinpoint a writer, I'd say Mike Maltese, or maybe Ted Pierce. Then again, Leon Schlesinger also employed gagmen in his service. Hubie Karp worked as a gagman for Michael Maltese, although he wasn't hired until late 1944. Any idea who might've worked alongside Mike around the time of the cartoon's production?

Onto the review: Porky and Daffy continued to be a successful duo in animated cartoons, that a hatful of story opportunities were open to them. For this cartoon, the locale is centered during the Colonial era. Porky assumes the role of a pilgrim, hunting for a turkey to feast for his Thanksgiving dinner, but Daffy intervenes by hiding the turkey from harm.

The opening sequence serves as exposition for the entire cartoon. In a wintery scenario, Daffy is contentedly building a snowman. Daffy reacts to the off-screen gunshots in a vigorous manner, as broadly depicted in the frame grab. Daffy encounters a desperate turkey, vulnerable from the shooting.

Some wonderful character animation from Bobe Cannon who depicts despair and cowardice in a comical fashion. The turkey cries, "Don't let 'em kill me! I'm too young to die! I've got my whole life before me: love, travel, good books!", and proceeds to climb on top of Daffy, whose weight burdens him, yelling and sobbing "HIDE ME!".

Daffy's nonplussed expression as he sinks slowly in the snow is priceless. It's a beautiful presentation of how one might respond awkwardly to such a plea.

Billy Bletcher clearly has a blast with his vocal performance for the turkey's plea - and wonderfully versatile in vocalising comedy. It's more refreshing from the standard, villainous voice; for which he was typically typecast in cartoons.

Ken Harris' animation beautifully portrays Daffy as ignoramus by showing that the character has no consideration for the turkey's well-being, by physically forcing him down potential hiding places; to no avail. First, he attempts to hide the turkey under a lump of snow and in another attempt down a rabbit hole.

Daffy's characterisation is portrayed in a hilarious fashion, as he jabs the turkey with a pole down the hole, until he reconsiders: "Nah, even more obvious-er."

Once Porky arrives and meets Daffy, he guards the snowman and attempts to stall Porky. To begin with, Daffy appears to be resilient and defensive; by declaring: "My lips are sealed." In a close-up; Daffy's "loyalty" is featured as a visual metaphor, with a dissolve of padlocks and a vice; supposedly closing his bill tight.

The opening scenes have already established the premise in a precise manner. Daffy hides a turkey, and defends him from hunter Porky. This paves the way for some comedy opportunities based on these characters. Daffy is clearly portrayed as careless and ignorant - so it begins to transcend that.

Porky walks away with disappointment, complaining: "I had everything ready for a nice, big turkey dinner." The following close-up exquisitely illustrates temptation and battling good vs. evil. Daffy is enticed by Porky's remarks about a roast dinner, so much so, that he desires it. Without being wholly corrupted; he forms like an angel, declaring: "I'm no stool pigeon." But, his halo disappears and devil horns appear at the thought of cranberry sauce!

Background colour play a pivotal part in Daffy's torn emotions. He's literally "torn" to the point when the colours are divided to coincide with the staging of the scene. A celestial blue colour depicts his willingness to do good; whilst a more vibrant purple colour suggests a sinister nature consuming him.

Chuck Jones' posing are broad and nutty in a sense, but Daffy's emotions feel very human in his hopeless attempt in fighting temptation; and his corruption. The point-of-view shot of Porky walking away is crisply inter-cut to evoke Daffy's increasing impulse.

Alongside mashed potatoes, chestnut dressings and greened peas; a favourite of Daffy's, candied yams, was also prepared for Porky's dinner. So, Daffy breaks down crying as he bellows: "The yams did it! The yams did it!". He impersonates a stool pigeon and begins to coo (squeal), indicating that Daffy is perfectly willing to reveal the turkey's whereabouts.

Daffy's breakdown serves as an unforgettable scene throughout his entire legacy. Succumbing to temptation and attempting to divert the blame correlates with the human mindset, and yet his betrayal is impeccably funny; right down to the animation and Mel Blanc's voice work.

Of course, like a Chuck Jones cartoon, Daffy directs the turkey's location to Porky with numerous signs, as though his desire isn't escalating any further. Dissolve inside the snowman, the turkey refers to Daffy as: "quisling".

The cartoon takes a different direction with the turkey plotting retribution for Daffy's treachery. The turkey steps in as a plot device to turn the conflict towards Porky and Daffy, rather than what the opening exposition established.

The turkey trails under a pile of snow and hides behind a remorseful crying Daffy. He sacrifices his own feathers to plant them on Daffy's rear end (without his knowledge), and gobbles to attract Porky's attention.

With the exception of Bugs Bunny, the Schlesinger cartoon writers knew fully well that their characters were dumb and unsophisticated. Despite just meeting Daffy a moment ago, Porky completely overlooks this and takes Daffy for a turkey. Daffy's denial isn't enough for the obtuse Porky; which puts him in a vulnerable spot.

Several gags during the chase sequence feel like a throwback to early Chuck Jones cartoons, which involved inanimate objects personified to challenge the character. This is evident in the scene of Porky getting attacked by Daffy's snowballs. Snowballs strike Porky from different directions, including two from opposite sides. Porky comes face-to-face with a large snowball, who mimics every  movement of his. Daffy arises and strikes him with a mallet.

Although Chuck had explored these gags several times in his earlier years (i.e. Elmer attempting to blow the candle out in Good Night, Elmer), the timing is advanced and the gag is kept spontaneous; with Daffy merging from the large snowball.

Further gags take advantage of the winter locale in the cartoon. Daffy fills up a bucket from a lake and tosses the water out of it. The running water solidifies into a piece of ice, and strikes Porky - with forceful timing to illustrate pain.

Daffy showcases his zany ability as he loiters by a tree and pours a glass of water over him, forming into ice. Porky's attempt to crack the ice with his gun creates a comical staggering effect from Ken Harris' animation.

Chuck Jones' innovative use of funny expressions are uniquely showcased in a scene of Porky that's remarkably broad. Porky has been fooled by Daffy from the "toll bridge" gag. He skids from the snow and has a moment of thought. After a series of visual gags highlighting Porky's stupidity, he completely boils up. Porky slams his gun in the ground and is all-out exploding with rage. He anticipates a huge sprint, as he digs up a lot of heavy snow before he exits the scene - animated sublimely by Bobe Cannon.

During the buildup, Porky goes through several angry expressions which are very far-fetched for a character whose relatively tamer compared to Daffy, or even Bugs. It's a unique form of outrageous posing that has seldom been seen in Porky or since. It's a pity that Cannon reportedly despised animating broad and wild, despite how well he excelled in it.

The wildness doesn't end, as during the chase, Porky's rage and speed are executed in a perilous and yet exaggerated sense. To begin with, he transforms into a war tank; symbolising force and danger. Such a gag easily rivals the more outlandish gags Tex Avery would conceive. The great use of energy in Porky's wrath causes a snowy hill to break open into a chasm. The cutting and timing of the chase scenes are a contender for Clampett's more flamboyant energy.

The final scenes of the cartoon are represented as a bookend to the entire cartoon. The turkey is contentedly building a snowman, but is ambushed by a cowardly Daffy. It perfectly matches the opening scene, to demonstrate the changes made through the course of the cartoon - and the heavy emphasis on the characterisations reverse.

The turkey gets the last laugh, as he deliberately re-enacts Daffy's careless attempts to hide the turkey. Soon, his "attempts" to hide Daffy turns ruthless as the turkey kicks Daffy up a tree; and cuts the tree down with an axe, causing it to land on his body.

The fast-cutting becomes very slick and abrupt to showcase the turkey taking pleasure in fulfilling retribution on Daffy. For the final scene, the cartoon ends very appropriately on the turkey continuously beating up Daffy Duck into the night - long after Porky Pig is out of the picture.

So far, Tom Turk and Daffy has become one of Chuck Jones' fastest paced cartoons; and definitely worthy of rivalling Frank Tashlin or Bob Clampett. The writing and structure is sublime and true to the animated cartoon spirit, and the conflict is executed hilariously from a writing standpoint between the three characters; that it keeps the whole viewing experience engaging and spontaneous. I can't emphasise enough on how overly entertaining this cartoon is; all down to its impeccable wit and execution. 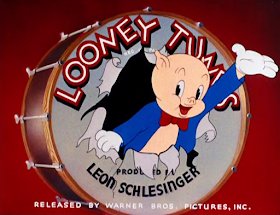